Task:
Debate motion: ‘Changes in workplace and leadership practices have been designed to deliver a more loyal, flexible and diverse workforce; which will help to meet current and future business challenges.’

Overview:
The proposed study is based on the Vodafone leadership style. Leadership is the exercise to lead a group of people within the organisation or community for directing, guiding and influencing the behaviour of the people for accomplishing the specified goals in the given condition (Cashman, 2017). So leadership since time immemorial has been influential in motivating the people and his followers to attain the business goals. In the dynamic business scenario, change is inevitable as there are supposedly changes in business and leadership practices across the industry say in the UK market. In such a scenario, leadership is known to take well care of the workers by providing them with statutory benefits to enhance their productivity.

What is the role of Vodafone leadership style in countering challenges in the changing business scope?
In the business scenario of Vodafone the leaders often face sorts of challenges to amend the work scenario for betterment of the workforce. It is done to provide the sorts of statutory benefits like earned leave, paternity and maternity leaves and social security among others (Mohelska & Sokolova, 2015). The issue in Vodafone leadership style is a thriving one as with the impending change, the organisational leadership is also supposed to undergo a change in terms of mission and vision of Vodafone. This is on purview to adjust as per the new scenario say to provide a better work environment to the employees.

Effectiveness of leaders during changing scenarios:
The UK market seems to be versatile with a series of changes taking place in the organisational front. The issues like the Brexit and the most recent global pandemic of coronavirus or COVID-19 striking the normal lives of the people. The Vodafone leadership style in UK is facing a series of hoodwinks and the lower productivity in growth and intense competition among the talents within the limited scene are troublesome. There are matters that need to be given due importance by the business leaders like the aspects of digitisation, globalisation and changing expectation of the targeted consumers leading to complicated strategic decisions. In a recent study, it is found that only a mere 11% of the British staff could relate to their work psychologically (Bligh, et al., 2018). So the leaders could very well sense that the due changes in workplace are likely to cast a shadow on the motivational aspects of the employees. If such changes are not communicated well to them, it could create a catastrophe in terms of organisational productivity affecting the UK economy as well. 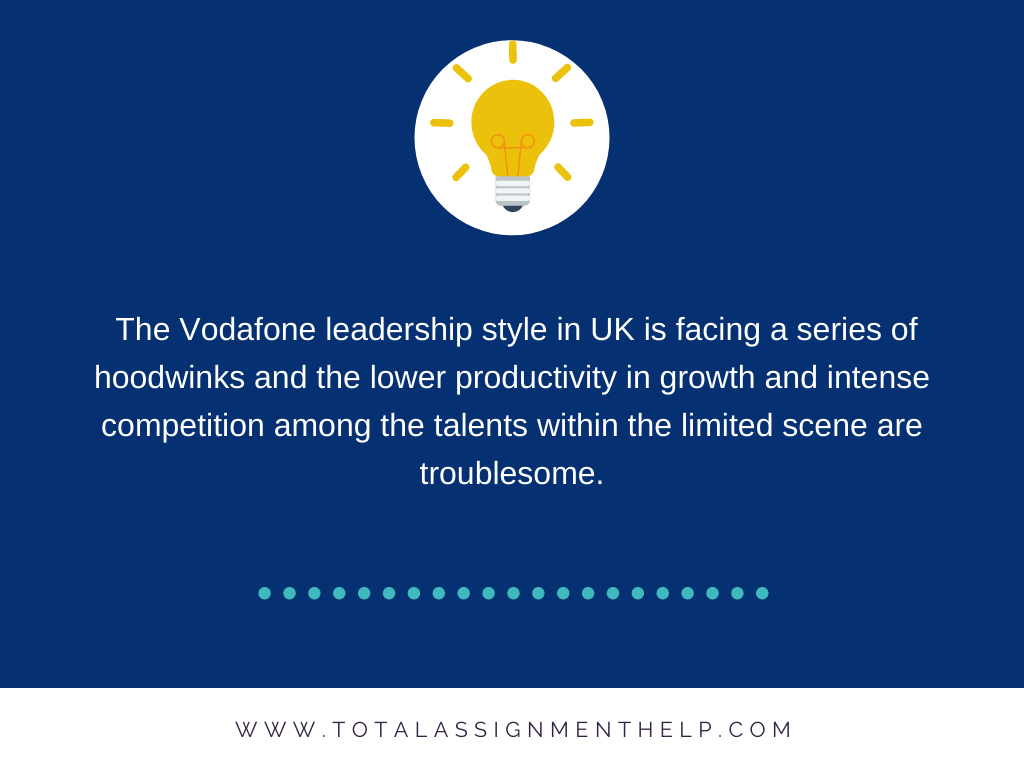 There are high speculations in the market that owing to Brexit, the renowned financial institutions like HSBC, Lloyds Bank, Santander and others could shift their base to a suitable business location in the European mainland. London which was considered to be the financial capital of the west is set to lose its charm. It implies that most of the Londoners associated with such institutions like Lloyds or HSBC need to move their base as per the organisational requirements or put down their papers (Cashman, 2017). Such sort of harsh measures might not go well with the staff especially the middle-aged and senior staff against the young talented pool. So the leaders chalked out certain distinctive avenues to be handled for bringing a change in the organisational scenario of business, such as – 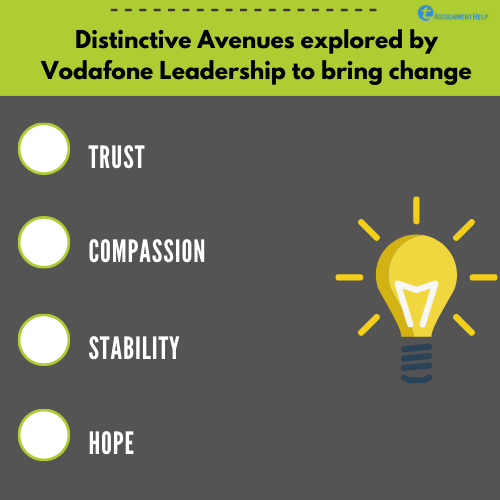 Trust seems to be the foundation stone between the leaders and his followers and the aspect of trust is necessary for a particular team to deliver its best. The successful team are able to lay down their trust on the leaders which is absent in the struggling teams (Ryan, 2013). For instance, Tesco has been able to build up an effective trust level with its staff which is definitely a helpful move to accept the plausible changes in the workplace scenario.

The aspect of trust could only be installed among the employees provided the leaders nurture the best interest to attain the common goal. A compassionate leader is highly likely to succeed in the process by sharing his compassion to the needs and requirement of the staff (Anderson & Sun, 2017). For instance, Vodafone is regarded highly for its diversity and inclusion strategy delivering equal opportunity to its female staff as well as those belonging to the LGBT community. The compassionate attitude of Vodafone leadership style could be understood from the fact that in 2019, it was awarded the ‘Top Employer Award’ in the working mothers’ category.

The employers want to work in a stable team and the aspect of stability could only be provided by its managers. Events like Brexit and lower productivity growth externally had already done the damages and it is up to the Vodafone leadership style to boost up the morale of the staff (Renz, 2016). Organisations like Lloyds run a number of activities like the apprenticeship program guiding and training the incumbents to prove their worth to the job, thereby adding stability to their career.

A leader is the one to whom the staff would look up as their saviour in times of crisis say on account of the impending crisis such as Brexit or the existing threat of COVID-19 (Mohelska & Sokolova, 2015). Change is the only continuous thing in the planet, so the leaders would be those facilitating changes to the organisational staff in a favourable manner. Accordingly, organisations like Santander work progressively by training and mentoring the staff to embrace the impending changes in the financial sector (Lewis, et al., 2017). Such sort of facilities develop a progressive mind-set of the staff to work for mutual betterment leading to a higher level of organisational productivity.

Santander is not new to accepting changes rather it has gained an expertise on it. Back in 2008, the organisation decided to unify the conventional financial organisations like Abbey National, Alliance and Leicester, and Bradford and Bingley. The organisational leadership decided to transform the entire banking set-up from a heritage institution to the sophisticated, systems-oriented banking model to strengthen the brand Santander (Al-Ali, et al., 2017). It is the capability of the then CEO, Antonio Horta-Osorio to communicate the change uniquely as a revolution to its staff rather an evolutionary need. So in this way the Vodafone leadership style has been able to make the staff understand of the gigantic changes to survive the market amidst intense competition in the UK market (Lewis, et al., 2017). It is an ideal example wherein the leader has gained the trust of his fellow subordinates, be compassionate to their needs, add stability by providing suitable training and raising the hope to be the market leader.

Role of Vodafone leadership style in development and retention of talents – 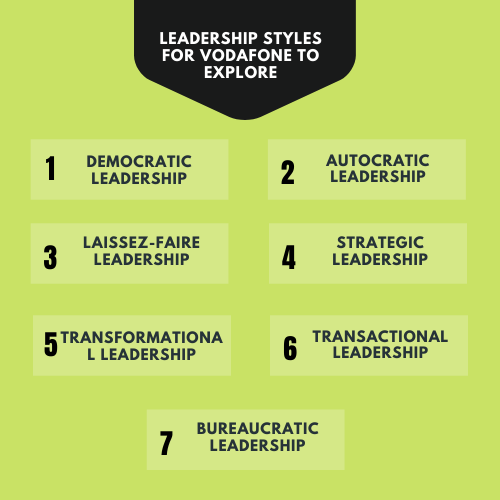 The democratic leader in Vodafone makes way for providing the employees with statutory benefits like social security, worker’s compensation, paid leaves and others (Donate & de Pablo, 2015). But this sort of arrangement could be expensive for Vodafone as the worker’s demand might go up substantially.

The autocratic Vodafone leadership style is rarely effective as the leader himself takes the decision and does not provide any scope for worker’s benefit (Northouse, 2018). But in the contemporary business scenario like Santander the leadership approach would be ineffective as it does not pay any attention to the existing business conditions rather decisions perceived from a singular angle.

The laissez-faire leadership approach seems to be effective in a start-up set-up as the organisation does not have any particular rules and regulations giving due liberty to the staff but with limited benefits as opposed to established concerns. Again this sort of Vodafone leadership style in the business scenario of UK would be expensive in terms as the decision makers owing to their inexperience and inability to handle the critical aspects of the growing business and their demands (Ryan, 2013).

The strategic leadership is commonly effective in the Vodafone as the leaders perceive the situation form a multiple angle source taking consideration of the prevailing business scenario and convenience of the staff (Bligh, et al., 2018). In this case, the leaders give due stress on the party’s benefit might compromise with the organisational benefit affecting its performance. The leaders take up measures like providing the fair wages and desired perquisites like maternity leave, paternity leave and casual leaves to motivate them and extract better productivity.

Transactional leadership is sometimes effective for Vodafone as the managers reward the staff for delivering a good performance for motivating them and extracting a suitable organisational output (Northouse, 2018). But mere rewarding them does not guarantee of abiding the organisational mission fulfilling their organisational responsibilities.

Summary:
The study show that in the changing business circumstances of UK it would be effective for the businesses to abide to the thriving scenario and choose a suitable Vodafone leadership style. The contemporary business scenario demands a competent Vodafone leadership style which could abide by the changes brought in like the democratic or strategic leadership approach. These leadership approaches would be able to understand the demand of the staff and provide them the right environment to work as a team. The passage of time has made the Vodafone leadership style aware of the sorts of changes required for the treatment of the workforce. The diversity and inclusion strategy of Vodafone leadership style to open communication system and effective training facilities of Santander has helped to bridge the gap between them and elevate the productivity level. So the aspects of trust, compassion, stability and hope are very significant to enable the leaders for accommodating the workplace changes suitable to the workforce.

Cashman, K., 2017. Leadership From The Inside Out: Eight Pathways To Mastery. [Online]
Available at: https://www.forbes.com/sites/kevincashman/2017/10/08/leadership-from-the-inside-out-eight-pathways-to-mastery/#10edbad3549c