Task:
For this assignment, you will study a visual argument made by someone else and write a detailed analysis of that argument. You'll consciously engage with rhetorical concepts such as ethos, pathos, logos, kairos, etc.

What is a visual argument?

An advertisement in a magazine

A successful Analysis of a Visual Argument assignment will:

Give a thorough, detailed written description of the visual argument

Summarize the claim made in the visual: the audience should do X because...

Analyze the context of the visual argument: where it appears (what type of publication), when it appears, what cultural phenomena/current events are being referenced and used, etc. You are not going to be in any position to analyze the audience unless you know something about the context.

Analyze the rhetorical appeals and strategies at work: your analysis will not be successful unless you demonstrate knowledge of the rhetorical terms: for example, ethos, pathos, logos, kairos.

Introduction
The image considered in this visual argument provides a clear indication of the abilities of women and the fact that women are capable enough to undertake work that requires strength. Although the image acts as a sarcasm that depicts the fact, that strength of women does not necessarily have to be of opening in a bottle cap. The visual presentation provides a comparison between the way women were seen in 1967 as well as in 2017.

Thorough and written description of the visual argument
As identified by Sinha et al. (2017) the women empowerment is claimed as one of the biggest adversities in the modern world. The image provides a comprehensive analysis of the empowerment. The iconic advertisement campaign depicting the strength of a woman is provided so that people can understand that unlike the yesteryears, the women also have a huge role to play in the dominance of the society.

Summarise the claim made in the visual
The claim made in the visual is that women need to be treated in an equal manner as men. The visual clearly takes a sarcastic dig at the fact that women are not strong enough to open a bottle cap. At the same time, a comparison of the ages is made which shows that the respect and status of women have changed vehemently. As stated by Ul-Hameed, Mohammad and Kadir Shahar (2018) one of the most important aspects of the image is that the strength portrayed by the women are based on a tiny object that is deemed to have a huge impact on the women.

In fact, the image also mentions a company that are capable of producing such easy to open bottle caps and take centre stage in upsetting the status that women have in the society. In this way, a proper identification of the rights of women is made including the fact that strength is not a characteristic that is associated with the women. The visual also claims that over the years the respect of the women has increased.

Analyse the audience targeted in the visual argument
The target audience in the visual argument are the men and women. The reason for this is that women are showed to be equal to men and for this reason, despite the feature of women characters in the image, the men also comes into limelight. In this way, both men and women are targeted in a way that can allow the image to take more effect on the society. The fact that equality is required to be maintained and the fact that the status of women have changed vehemently in the past era are some of the ways with which the image tends to lure in the target audience.

Apart from this, Habib et al. (2019) also provide the fact that the children can also be inspired as the sarcasm is mainly directed at the way children would like to address their problems. Female children of the present era would be influenced and an idea of the way women were treated in the past can be gained. Thus, with a fixed target audience, the image tends to provide a proper understanding of the ways with which women and men can be considered as equal in the modern world. For this reason, the target audience is appropriate for the image and the research to take place on the image.

Analyse the content of the visual argument
The content of the visual is the famous representation from of the advertisement thatfocuses on the concept of casual sexism that was prevalent in the United States (Stich, 2020).It reflected the aspect of rising consumerism revolution that adhered to the notion that women were acquiring independence from patriarchy and were not simply limited to being a housewife. 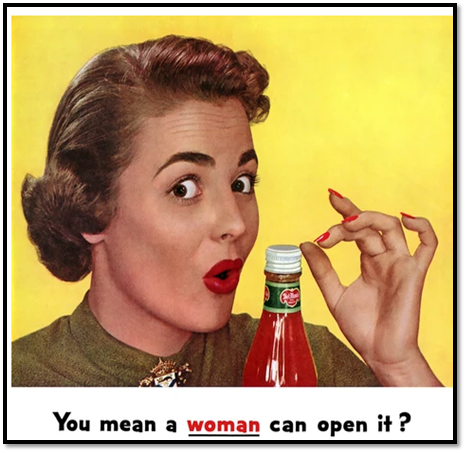 It is entitled Alcoa Aluminium 1953, that promoted a women trying to open a HyTop twist-off bottle cap. It alluded to Del Monte Foods that featured a bold woman in red lipstick, under the tagline “you mean a woman can open it”. The word is underlined in the picture signifying that casual sexism faced by woman in terms of physical strength. The imagery is further accompanied with the words “Even without, a knife blade, bottle opener or a husband”?.

The picture has been the subject of criticism within later reviews. The imagery resonates, with the social stereotypes, prevalent in UK during the 1950. The content states that women are capable of intelligence as well as physical strength. It has appeared in the Mad Men Era as an emblem of social stereotype concerning women during 1950. It was also highlighted in the New York Daily news portraying a “stunned woman” being able to take on responsibilities as equal to a man (Bertazzo, 2018). It is a vintage poster that acquired acclaim for its display of pathos, and the use of authentic sarcasm. The content within the image, alludes to feminist theories, as per critics and authors stating the role of equal understanding between men and women (Pooley and Pooley 2020).

Analyse the rhetorical appeals and strategies at work
The content comprises of rhetorical devices and allusions, that add to the message, within the imagery. Pathos refers to invocation of sympathy or pity to gain a desired reaction from a set of audiences. In terms of the visual imagery, the image depicted an angry response from the audience as it fails to acknowledge the role of a woman within a society. The concept of ethos has been attempted as it persuades the audience to acknowledge the role of a woman other than a housewife, within the society. It is integral to note that the concept of ethos relates to emotions that are invoked by a speaker, while addressing the audience. The emotions of a newfound change to the perception of the role of a woman as a housewife, has been depicted within the study (Mensah, 2020.).

The content has favoured in the use of ironic humour, by alluding to statement such as “dainty grasp”, easy two finger twist”. It has invoked responses, from all over the globe pertaining to the role of woman within American households. The rhetorical appeal of kairos has also been put into work, within the American advertisement eliciting responses, that are timeless, and have been able to state the ,message of feminism and consumerism, revolution. It has also highlighted the role of woman as finding a singular unified voice, against patriarchy during the 1950.

Consider interpretation of the image
The image can be interpreted in a number of ways, using various rhetorical devices. The message portrayed by the image is an interpretation of woman empowerment, which is significant and highly accounted for in the 21st century. It sheds light on the role of women during the World War II and can be perceived as an initial step to the rising wave of feminism within the 1950 (Pereira-Alvares, 2016).

Assumptions about the Image
The visual imagery also takes into account the image of a bold woman wearing a bold red lipstick. The concept of the use of bold red lipstick empowered women. It was often looked down upon as morally corrupt for a woman to ornament red lipstick based on their own accord. The advertisement flouts the convention of an immoral woman and takes a stand with a powerful tagline invoking logos from a particular set of audience (Bissing et al ., 2019). It can be assumed that feminist theory is one of the assumption made within the advertisement, which should be taken into consideration.

Accuracy of the Image (Why/ Why Not)
The image is accurate as it points out to the issues that were prevalent during the Second World War . It provides, an understanding on the casual sexism and issues, faced by women. It also highlights the role of women in the field of labour.

Conclusion
As such, a comparison is made between the women in 1960s with that of the 2017 women. In this way, the image is a strong statement of the women rights and activities that can be deemed as powerful enough to make the necessary changes in the society. The image also displays the care taken over the women to undergo such changes so that equality remains.

Tran, N.K., Ceroni, A., Kanhabua, N. and Niederée, C., 2015, February. Back to the past: Supporting interpretations of forgotten stories by time-aware re-contextualization. In Proceedings of the Eighth ACM International Conference on Web Search and Data Mining (pp. 339-348).