1. Based on the scenario given below, (i) analyse client requirements, (ii) identify and propose the required servers and server roles (services), and (iii) provide required configurations for the scenario.
2. Perform the configurations using either virtually or physically installed server OS to realise the scenario. Students can use Windows Server 2012 or a higher version, or Linux server if appropriate. Your submission should include screenshots of each important step.
3. Prepare a detailed system documentation report. This report will serve as an important part of backup and disaster recovery documentation. As such, you must consider human usability factors and include the configurations using description of each important step, and screenshots corresponding to those in a way that will be useful to the target users of the document. Essential sections of the documentation are provided in the marking guide; however, you can include additional sections if deemed useful. You should explain how documentation of network changes should be handled and how documentation can aid the troubleshooting process by keeping a record of common issues.

Scenario
You are the system administrator for a local council in your area, called Sydney that is moving into a new building. The local council has 100 full-time employees, as well as up to another 50 that either works part-time or performs short-term contract work. Each full-time employee will have a dedicated workstation; most also have a laptop. The part-time/contract staff have their own or company-supplied laptops. There will also be several spare workstations. They have four departments: IT, HR, customer service, and Finance. All objects (e.g., users, computers, etc.) belonging to these departments need to be created within their respective OU for their own department. The client requires the following LAN services:

Workstations, Laptops and Servers
The local council has grown quite quickly. Initially when there were just a few friends, they used all online services (e.g. Google Docs, GitHub, DropBox). But now as they move into the new building, they have decided to use their own infrastructure. Most of the employees work in a distributed mode, working on their own computers and sharing resources direct with colleagues, however there are several centralised services required. Specifically, they have identified the need for the following. Included are the selected names.

5) All computers should acquire the IP addresses automatically from a server
6) Hosting of their own website using their own server
7) The company wants to store all the files on a separate file server and only users with appropriate access will be able to access them (not every user should have access to the files). You can assume which users/groups will have access to these files, and state your assumption clearly.
8) Table of servers, with MAC addresses, allocated IP addresses, client IP address ranges.
9) Installation and configuration details of all the servers.
10) Explain why you designed the backup in the way you did, for example, explain your recommended frequencies of backup.
11) Details of a password policy and its implementation. The policy should be appropriate to the organisation, and detail exactly how it is implemented in the system.

Introduction:
The system administration assignmentis associated with the design, installation, and configuration of network servers. The network is the main communication channel for the organization based on that the particular organization can communicate with their clients. As well as the internal network of the organization is used to connect with different devices so that they can connect and share important resources. To do that client-server network is very essential. In this way, the devices are connected to this server system and if the server is configured with the DHCP connection, then there is no need of assigning the IP address to the client device. Automatically the devices are getting an IP address from the server. As per the case study, the organization needs various services in the LAN and also they need a website to host in the server of the organization.

1. Organization Scenario:
This section of the report is associated with the organization scenario based on that the organization needs to develop its architecture. As a system administrator for a rural council in my area named Sydney, it is gradually moving for the new building. This local council consists of one hundred full-time and regular employees. Also, other 50 employees work for a part-time job or contract work. Every full-time staff should have a laptop and dedicated workstation. Contract and part-time staff members should have to keep company-provided our laptops. Multiple spare workstations will be there also. There will be four different departments- Customer Service, HR, IT, and Finance also. Various objects (computer devices, users, etc) that have to be built as per OU respective are belonging to all these departments. Clients need LAN services- Servers, Laptops, Workstations.

A local council is grown up gradually. There are few friends, who used applications of online services like GitHub, Google Docs, etc. But, still, they want to move on to the current building and also take decisions for applying their infrastructure. Most employees do their activities through distributed mode, and also share resources with colleagues directly. Therefore, required multiple centralized services are there.

i. Analysis of the client’s requirements:
To develop this infrastructure as per the organization, some organization requirements are pointed out. These specific requirements are pointed out in the following section of the report.
i. Windows webserver, considered Sydney, for hosting company website simply. It might be developed by using different computer languages like JavaScript, PHP, CSS, and HTML. Full-time staff does it with assistance contractor.
ii. DHCP server, considered DHCPSydney, to give IP address dynamically to laptops, workstations, and also set up IP address to another service.
iii. Backup server, considered BackSydney, for storing web and server backup upon the network.
iv. Require centralized user authentication system
v. Require hosting website with aid of using own server
vi. All computer system must obtain an IP address (Internet Protocol address) from own server automatically.

vii. An organization demands restoring all files upon a divided file server. Along with that, only users can get accessibility to access the file server.
viii. Servers table with MAC address, range of client IP-address, assigned Internet Protocol address.
ix. Server configuration efficiently.
x. Password policy details with proper implementation.
ii. Identification and purpose of the requirements of the servers:

This section of the report is associated with the purpose of a service that is a high-performance system. It can assist in the supply of numerous resources, data, and services to something like a remote computer termed as a "Client" across various kinds of networks including a local area network (LAN) or a wide area network (WAN) [1] [4]. Servers can operate on a variety of computer networks, but enough hardware must be available to handle the needs of your servers.
The server's primary role is really to access, store, and transmit all information and folders from many other computer machines through the help of the network. In small-scale organizations, a local network is often used to interconnect many computer systems [1]. The server's major purpose is that all of its components are set up in response to any requests from client computers across network connections. This feature seems to be a component of a computer system that is used by many apps. The client device should be allowed authorized to enter all information as well as other resources; the server can undertake those certain tasks such as one request as well as the response that is going to enable with recognizing identification of any users.

DHCP Server:
The term DHCP stands for Dynamic Host Configuration Protocol that can allocate an IP address and also parameters within the network [3]. This, a network management protocol might be applied to automate configuration procedures upon IP network. DHCP is an upgraded version of BOOTP (older protocol).

As per the case study scenario, a DHCP server that is known as DHCPSydney is used for providing IP addresses dynamically to laptops and workstations [3]. Along with that, it can fix IP addresses to another server. Only full-time employees can access this server.

Backup Server:
The backup server can facilitate application, data, database backup, or file upon the remote server. This can give retrieval storage and backup storage [6]. In the context of the case study scenario, a backup server, referred to as BackupSydney is used to restore a backup of servers, web upon the network. 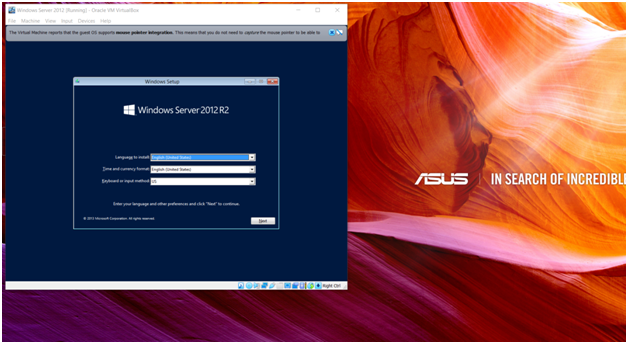 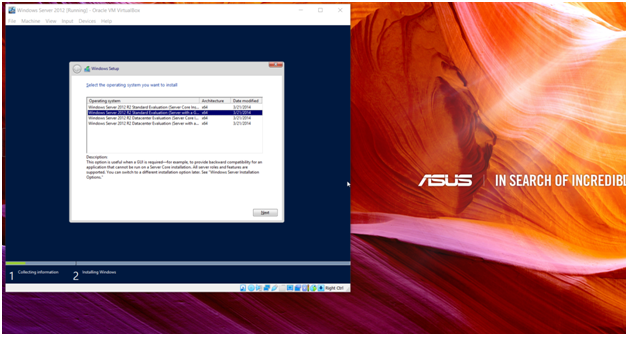 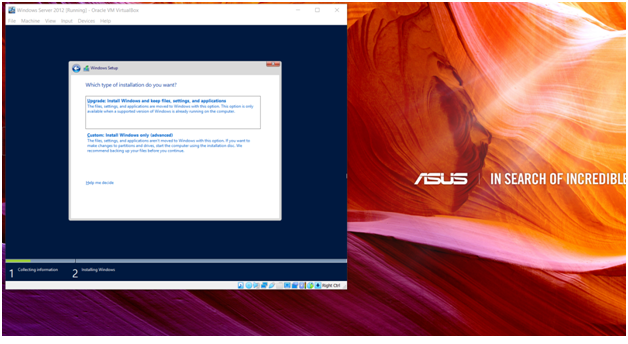 3 shows installation type selection at the time of setting up and installing Windows Server 2012 R2 [2]. 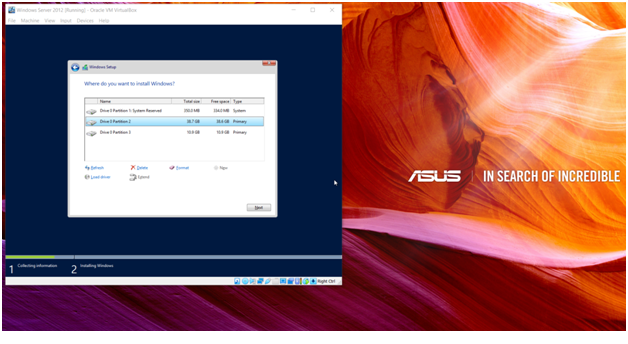 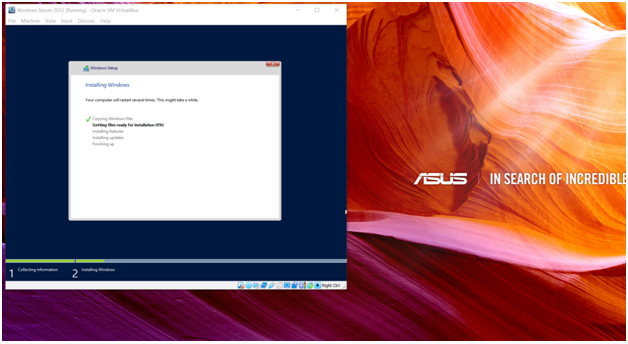 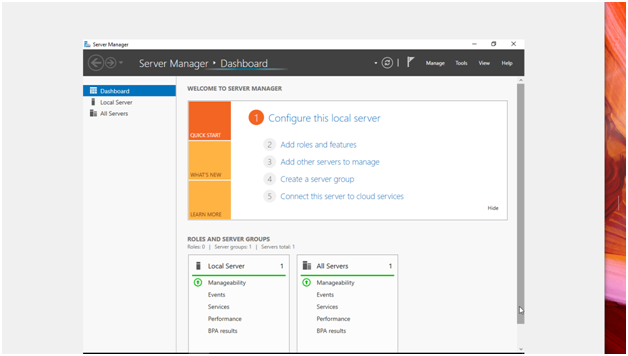 Figure No-6: Local Server Configuration
(Source: Developed by the learner) 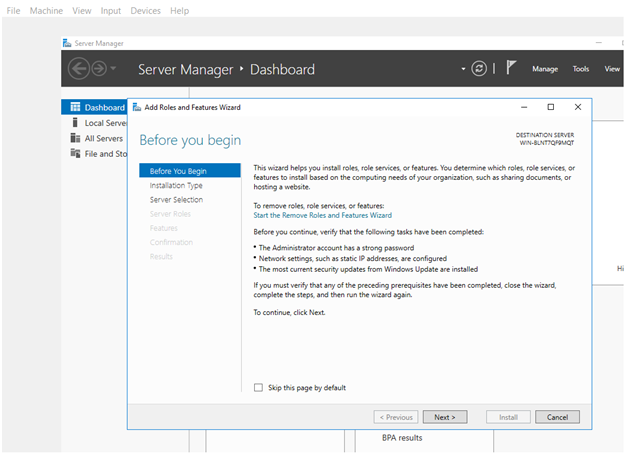 Figure No-7: View Role and features addition wizard in Server Manager
(Source: Developed by the learner)

Figure 7 shows Role & features addition page in dashboard of server manager. This wizard aids in installation of role, services, and features based upon requirements of computer device. 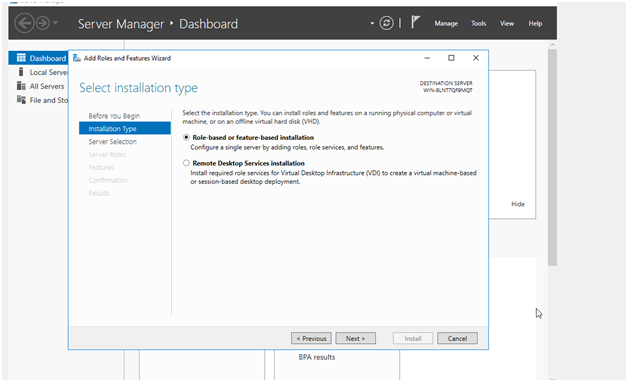 Figure No-8: View Selection type of Installation
(Source: Developed by the learner)

Figure 8 shows installation type selection in dashboard of Server Manager. In this case, role-based or feature-based installation process is selected. 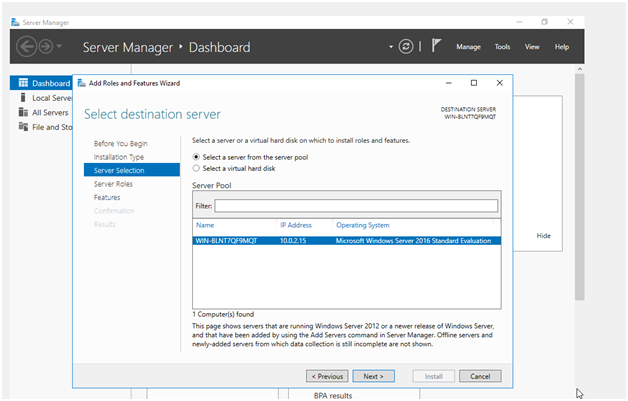 Figure No-9: View page of Destination Server Selection
(Source: Developed by the learner) 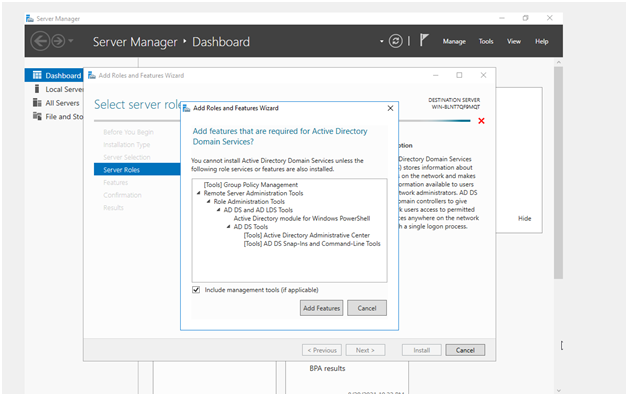 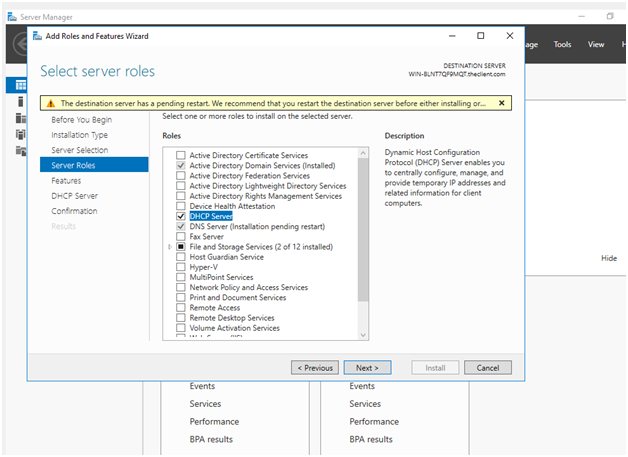 Figure No-11: Sever Role Selection
(Source: Developed by the learner)

This figure shows that DHCP Server is selected as role in server. 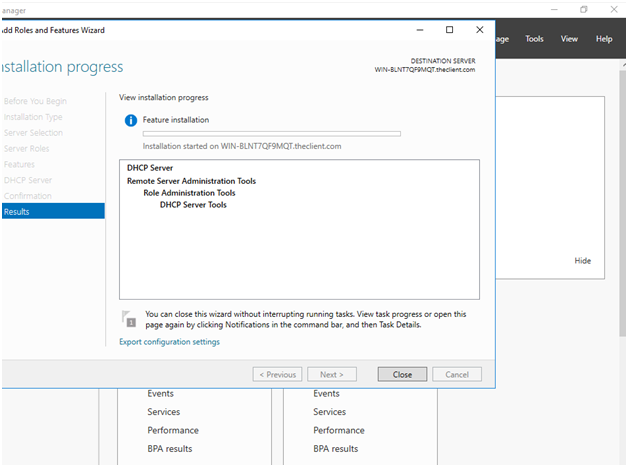 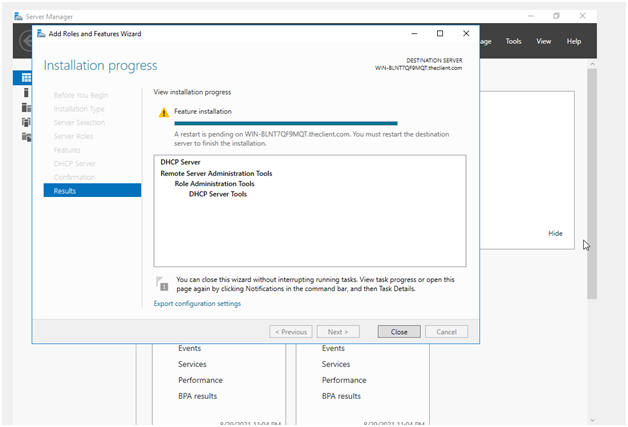 Figure No-13: Successful Feature Installation
(Source: Developed by the learner)

3. System documentation report:
This section of the report is associated with the system documentation report that serves as an important part of the system and the documentation work. The configuration of the system will be demonstrated here. In the organization server, one ADDS role is added and it adds a domain forest that is the domain name. So that when the user wants to enter into the system, they can easily enter into the system by typing the particular domain name and the respective password of it [3]. After that, the DHCP role is added over sever so that the client devices got connected very easily to the system. The organization wants to establish the LAN network thus they can incorporate different client devices into this particular network. And after that, they just want to host a website into the Server so that when any client device is going to access this server, it provides a website to the client interface.

Conclusion:
After analyzing the entire report, it is concluded that Windows Server 2012 is the current version of OS (Operating System) from server management. Client requirements are analyzed. Apart from that, required servers are identified and roles of the server are proposed. The configuration procedure is described in this assignment. These configurations of the Windows server can easily provide a way to host a website in it and the client can use it by the client device. However, this assessment report is completed with efficiency.