Task: This stakeholder management assignment is based on answering questions in regard to the Case Study of WA schools public private partnership (PPP) project.

Question 1
WA schools public private partnership (PPP) project was established by a $631 million contract between the State and EduWest consortium for the construction and maintenance of 4 primary and 4 secondary schools. The project was expected to entail a variety of benefits such as lower costs for whole of life, design and construction innovation, etc. However, the project had some governance issues that needed to be taken care of.

The project has three major contract parties, Department of Education (DoE), the Strategic Projects business unit of the Department of Finance and EduWest consortium. The working relationships between the parties are sound. A steering committee fulfills the duty of providing strategic leadership and a cross-agency project control group gives direction to the parties for the advancement of the project. The DoE is in charge of the contract management process, however, the DoE’s approach to contract management is associated with some flaws in it. The DoE has employed 2 contract staff but they were employed late much after the commencement of the project. The contract management tools of the DoE were not in place for the commencement of the schools and the overseeing of the daily operations. The DoE had not devised any plan for contract management or a formal contract management manual that the staff can refer to while managing the contract (Joslin and Müller 2016, 613-626). The DoE does not have any procedure for routine checks that would inspect the level of building maintenance and other services and ensure that they meet the required standard.

The contract management team performed some inspections of the cleaning and gardening done in the schools. However, the contract management team of the DoE mostly relies on the feedback from the school officials regarding the level of service performance of the EduWest consortium. However, this can lead to faulty evaluation since the school officials have little knowledge about the specifications of the services as set by the contract (Samset and Volden 2016, 297-313). The contract established between the parties is a self-reporting contract by nature. Therefore, EduWest is required to submit reports of its own performance. However, DoE and EduWest have not yet settled on the method by which EduWest would perform the monitoring of this project. This can lead to certain discrepancies in the process.

Question 2
The Stakeholder Circle is a visual tool that helps the learner to identify and analyze the power and influence of the stakeholders in any project (Bourne and Walker 2005). This tool is extensively used for gaining strategic insights in project management. 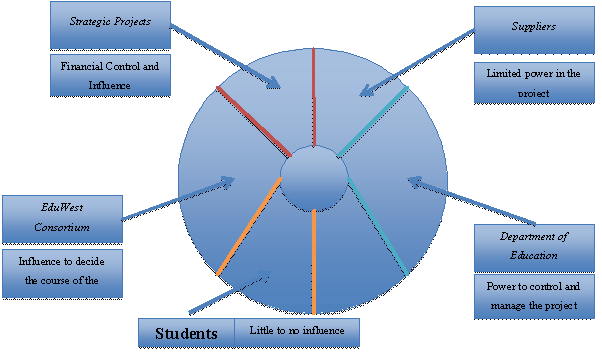 The PPP project of WA schools is a major project for the construction of 8 schools. There are 5 major stakeholders that have been identified in the project that exert a significant amount of influence and power over the completion of the project. The major stakeholders of the projects are the DoE, the Strategic Projects business unit of the Department of Finance, EduWest consortium, the suppliers, and the student community.

Question 3
According to the Stakeholder Circle, two key stakeholders have been identified in the project- the Department of Education (DoE) and EduWest consortium. These two stakeholders are the primary participants of the project and wield power and influence the course of the project (Bourne 2006).

The key stakeholders of the project must be managed in a diligent way to ensure the successful completion of the project within the stipulated time. The DoE must improve its contract management process since the lack of proper contract management can result in a low quality of work in the PPP project. The DoE must compile a team of cleaning and management officials that would look into the cleaning and management aspects of the newly constructed schools. The Strategic Projects unit must be coordinated properly by the DoE as the financial dues of the project are cleared by the unit and any delay in doing so can significantly derail the project from completion within the allotted time. Moreover, the DoE and EduWest consortium must arrange a meeting to decide on the methods that the consortium can deploy to monitor and measure its performance and report it to the DoE and Strategic Projects unit. The parties must revisit the claws of the agreement and decide for any modifications that can be brought about in them (Bourne 2016, 431-438). The DoE must set a fixed time for the evaluation of the performance of the consortium after the evaluation of the self-reporting document of EduWest.

Joslin, Robert, and Ralf Müller. "The relationship between project governance and project success." International journal of project management 34, no. 4 (2016): 613-626.