Task: This assessment is designed to assess your skills in analysing the IT Infrastructure hardware, software and networking requirements for a selected organisation, select an organisation. The organization must provide IS services to the staff and customers such as email, webpage, and database. You have to write a report to answer the followings related to the selected organisation:

1. Introduction to illustrate the services the organisation provided and how each department uses information technology.

2. Identify and discuss the network devices required to achieve the organisation day by day activities. Explain the function of each device.

3. Specify the type of application software required for data communication between the clients and servers for each department. Justify your answer.

4. Use the seven layers 051 model to explain with the support of diagram how data are moved between the layers when an employee’s open the home page of the organisation website

5. Summary of the report

In the present scenario assessing Microsoft information technology it can be observed to deliver strong competition to the other market players by continuously developing the level of its IT-related services. There are several factors behind its position in the marketplace due to its strong brand, variety of products and services, a strong base of customers, investment in research and development and constantly releasing the new and innovative technologies (Hanna, et. al., 2018). However, there are some new organizations are providing competition to Microsoft information technology fundamentals due to their capability of fulfilling the demand for web pages and web-based applications. This report is based on the analysis of the network devices and the use of the different type of network communication devices by different departments of Microsoft.

Services provided by Microsoft information technology
Microsoft offers online services for both, the businesses as well as for the consumers. The main services include webmail, calendar, contact, data storage etc. These can be accessed with the contribute towards Microsoft information technology. The team of Microsoft also facilitates a wide range of consulting services and support services to the partners, consumers and businesses.The main services are Devices, Bing, outlook.com, Microsoft account, profile, MSN, onedrive etc.

The above steps are mentioned on a bar chart and by using the software of project management, Gantt chart is designed. The Gantt chart is also needed to be approved by the Steering Committee (Lun and Zhao, 2015).

Use of Project Management Software
Microsoft information technology is used to schedule, plan and control the activities and functions of a project conducted by Microsoft. Thus, this technology is used by the operations and project management team to plan the projects after considering all negative and positive aspects. This Microsoft information technology is designed by the organization itself and thus, it includes the basic requirements of the organization. It also helps in forecasting the business situations and the results of policies and proposed decisions.

Verification of the Application

In Microsoft, there are various types of network devices falling under the Microsoft information technology which are used by almost all the departments to facilitate the communication of data between servers and client, which can be defined as follows:

Desktop Publishing: This application software is used by Microsoft to develop their own printed material like brochures, manuals; newsletters etch with the help of multiple types of styles, colours and graphics on each page. Thus, this software helps the organization to connect with the client-server and to generate their needs and demands (Zhao, et. al., 2018).

One tier architecture: This involves the presentation of the user interface, client-server setting, data logic and marketing logic in the same system.

Two tier architecture: The user interface is stored in the machine of client and the data is collected on the server. The business logic and database logic are filed at either server or client but required to be maintained. If data and business logic are collected at the site of the client, then it is known as fat client thins services architecture.

This application system is used by the information technology department of Microsoft to transmit the data from client to server and then from server to client.

OSI Model Application
When a homepage of a website is opened at a personal computer or any other devices, the OSI model of 7 layers helps in a below-mentioned manner: 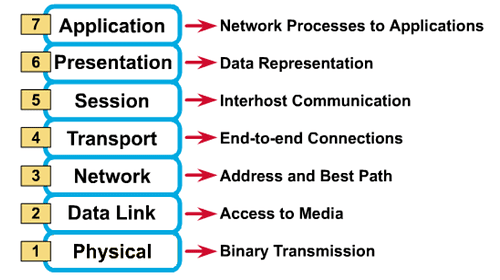