Task: Select an engineering topic that is of interest to you personally and relevant to your
course of study.
Research the topic using physical and electronic resources of the university library
(preferred), or external sources, to identify and review recent research reports,
ideally published within the past 5 years in peer reviewed journals (NOT
conferences).
Critically analyse the outcomes that have been presented in two of the sources
you have reviewed in terms of their methodologies, data collection and
interpretation process.
Write a structured report explaining your research process to find and select two
sources, compare and contrast them, presenting your analysis of their findings,
and how such analysis has helped to increase your knowledge of the subject.
It must be properly structured, accurately referenced, and correctly presented. In
addition to reference citation in the body of the report all illustrations should also
be captioned and appropriately referenced.

Introduction
In the present context of rapid global warming and climate change within this research methodology assignment, the demand for the air conditioner is increasing at an alarming rate. The increased usage of air conditioners all over the world has also increased the use of electricity. According to El-Shaarawi et al. (2016), air conditioners can be regarded as the highest energy-consuming appliances in residences, public and commercial buildings, and offices of businesses. Therefore the present research methodology assignment is based on critical analysis of the research papers that have been focused on the development of air conditioners with the utilisation of solar energy. The study critically analyses the research methodology, data collection and interpretation procedure as well as research findings of two major research articles in this area.

Research process to find and select two sources
In order to conduct the present study on research methodology assignment, it was important to find information from relevant and valid sources. In order to select two authentic and relevant research articles in the context of solar-powered air conditioners, online searching databases such as Google Scholar and EBSCO were used. Based on the topic of the present study, keywords such as solar power,air conditioner, solar-powered AC were developed and applied while searching for research papers. In the view of Ali et al. (2019), the incorporation of latest research papers is important to gain knowledge regarding an engineering subject as the engineering field is based on technological aspects and technological advancements are highly related to the time. Hence research papers that were published within the last five years were collected and the abstracts were analysed and were compared for suitability with the topic. The two research papers that were much more similar to the topic of the present study for which the full papers were accessible were chosen for review in this study.

Critical analysis of the two sources
Research methodology
According to Caillaud et al. (2016), research methodology relates to the particular techniques or process that are utilised in identification, selection, processing and assessment of data regarding a particular subject of interest. The first research paper that was selected for review in the present study was based on “the techno-economic analysis of a hybrid solar PV grid powered air conditioner for daytime office use in a hot humid climate”. This particular work was conducted on the analysis of the performance of a “hybrid solar PV grid powered air conditioner”, which was based on a case study in Kumasi city of Ghana. In order to conduct the research methodology assignment, the researchers had chosen a 30 m² floor area of a building that shared three sides with the adjacent officers while the front side was facing toward the north (Opoku et al., 2018). The researchers also set the air conditioner at a temperature of 20 degree Celsius. An experimental design was applied by the researcher in this research. In the research, the researcher set the pure sine wave hybrid inverter with the integrated PWM charge control system to the solar energy priority and provided support to it with utility grid electricity while sufficient solar energy was lacking.

The second research on research methodology assignment was focused on the assessment of "portable solar power DC air conditioning system". The researcher has used different approaches to develop a particular research project. Firstly, a collection of information on the intensity of solar radiation was accumulated and processed. After filtering, information regarding solar irradiance was divided into monthly,hourly and annual values. The load calculation approach used in the research was related to the determination of area size and the degree to which cooling was required in providing a healthy environment. The design of the air conditioning system was also approached in the methodology and it was designed on the basis of the weather requirements and low consumption of power. Cost optimization was another approach to the methodology. The researcher the necessary components and after that the construction of the experimental system was done and its performance was evaluated (Ilahi et al., 2018). To make the system more economical the system performance was evaluated and extensive calculations were made by the researcher. The last stage of the research process, as described in the methodology of the concerned research paper was the analysis of the results and the further recommendations

Data collection
In the opinion of Roh et al., (2019), it is stated herein research methodology assignment that data collection is the process to gather information regarding the different variables involved in the research question of the research objectives of the research. In the first research paper, the climatic data were collected through secondary research. The researcher has collected dry bulb temperature and relative humidity for the period of 2012 to 2016 and 1976 to 1984 from secondary sources such as research papers and weather station reports (Opoku et al., 2018). Apart from that, primary data was collected from a standard office of 30 m² floor area. The primary data was related to the estimation of the seasonal cooling load demands as well as the wall transmission load in the standard office involved in the experiment. The different variables based on which data were collected to prepare this research methodology assignment are the “power output of the solar PV array, power consumption of the air conditioner, the voltage level of the battery, and the power supply from the grid”. Data relating to two characteristics of the office space solar PV energy generation, hybrid inverter and battery were gathered by the researcher. In order to gather information, the researcher has used different equations. 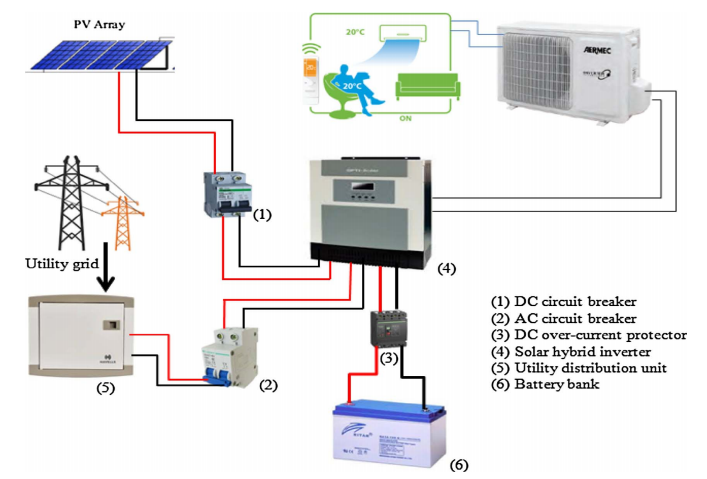 It has been evidenced in the research methodology assignment that the data collection approach used in the second research is much different from the first research. In the second research, in order to collect data, researchers had depended on a prototype experimental setup that was designed for observing the real-time analysis. The experimental system from which the data was gathered included different units such as sources of power supply, air conditioning system, compressor, condenser, evaporator, expansion device and refrigerant. Hence, the research on research methodology assignment was only based on the primary data collection method. Primary data regarding coefficient of performance for the cooling system, backup time of the battery, sensible heat ratio, sensible heat change, latent heat change, and BTUand area size calculation has been gathered from the experimental system design pattern search. 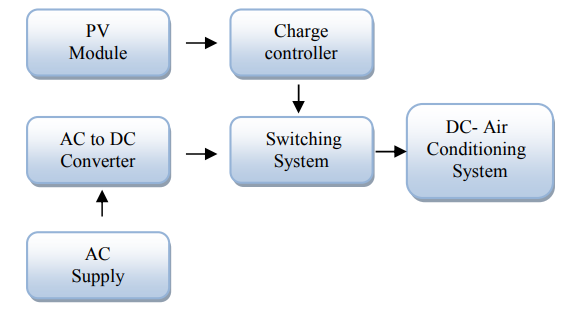 What is the role of Interpretation process in the context of research methodology assignment?
As explained by Kirn et al., (2017) interpretation in research projects can be regarded as the process to make sense of the numerical for qualitative data that has been gathered, assessed and presented in the research findings. It has been all Sweden that statistical analysis is one of the common methods that is used to assess numerical data in research projects. In the first research that has been focused on the techno-economic analysis of hybrid solar PV grid powered air conditioners (Opoku et al., 2018). In order to interpret the data regarding the average dry bulb temperature and humidity in the region of the standard building used for the experimentation in the research, the researcher had developed a table. The table mentioned in the research methodology assignment has effectively held in comparing the average humidity and dry bulb temperature of the region based on the time period. 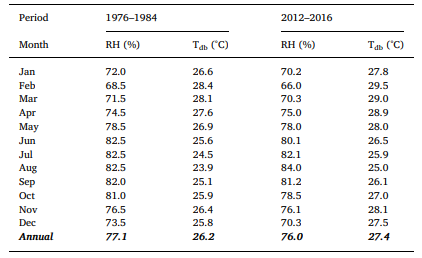 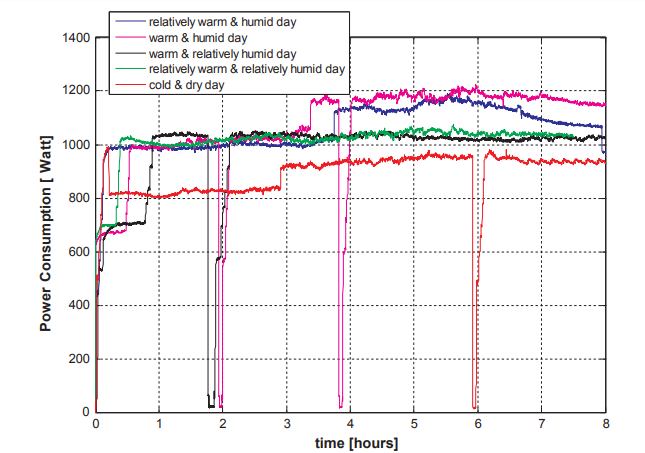 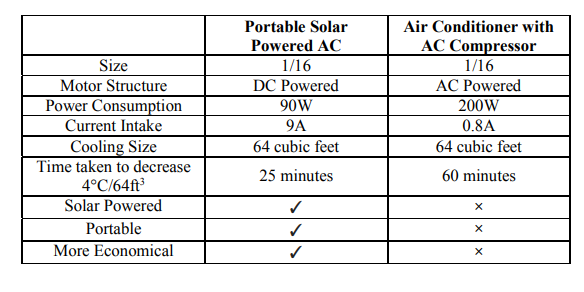 Research findings
The research findings of the first research paper included in this research methodology assignment have identified that for cooling of the office at the daytime, a 1040 Wp solar PV system along with 200Ah, 24 V battery configurations poses a monthly means solar fraction of 51% ± 9% in relation to an air conditioner that had a nominal cooling capacity 2.5 kW. The research on research methodology assignment had also revealed that the maximum power consumption was around 1.19 kW. The financial analysis conducted by the researcher in this study has indicated that in relation to "the hybrid solar PV grid powered air conditioner" the potential savings that could be gained is US$ 1600 whereas the grid electricity was identified to have 100% utility in 10 years. The study has estimated a potential savings of US$ 3300 for powering the air conditioner with 100% solar energy as compared to the 100% utility grid electricity. It has been also identified that there are no power surges of the AC during its functioning.

The research findings on the second research paper indicate that the solar-powered DC cooling systems lead to more economical and effective cooling as compared to solar-powered AC systems. It has been identified from the findings that the solar-powered AC system had consumed 90W for the first solar-powered the power consumption rate began reducing gradually by the 14th second reduced to 60W. The time taken to decrease 4 degree Celsius by the solar powered DC system was 25 minutes which was 60 minutes for air conditioners that included an AC system (Ilahi et al., 2018). The current intake was recorded to be 0.8A in the DC system which was 9A in the solar powered AC system. Apart from that, it has been also evident that the power consumption of the DC power air conditioners was much less as compared to the AC powered air conditioners. Hence, based on the findings of the second research paper obtained in the research methodology assignment it can be said that the features of DC compressors make the air conditioners easy to be controlled.