Task:A sociologist theorised that people who watch television frequently are exposed to many commercials, which in turn lead them to buy these goods, resulting in increasing debt. To test this belief, a researcher plans to survey a sample of families across the country.

Part 3: Second, the researcher wishes to investigate the association between the two variables.

Part 1
a) The most appropriate survey method in this case of quantitative analysis assignment would be online survey since it would ensure higher geographical reach at a low cost. Since samples are to be collected from across the country, face to face survey would be highly time consuming and costly. Further, the questions are also close ended which do not require much interpretation (Flick. 2015).

b) The appropriate sampling method would be stratified random sampling. This would ensure that the sample would contain all pivotal attributes which could impact TV viewing and hence ensure a faithful representation of the underlying population of interest (Hillier, 2016).

d) Both the variables highlighted above would have numerical or quantitative data with the relevant data measurement scale being interval. This is because for both the variables an absolute zero is defined and negative value cannot be assumed (Medhi, 2015).

e) Certain issues that the researcher may face during the collection of data are as follows (Flick, 2015).

PART 2
a) In order to decide on the number of classes as 10, the researcher would have taken two aspects into consideration which are the range of the underlying variable and the distribution of values in the range. Considering the range, a rough idea of the desired classes may be brought about but a more accurate estimate would consider the distribution of value since too large class sizes may result in a high amount of observations belonging to a particular class which is not advisable (Hillier, 2016).

b) The requisite histograms are highlighted as follows.

c) The numerical summary for the selected variables is indicated as follows.

d) In relation to television hours, it is apparent that the mean is higher than the median by a slight amount which indicates that some amount of positive skew is present owing to families having very high TV viewing weekly hours. In relation to total debt, it is apparent in this quantitative analysis assignment that the mean is lower than the median by a small amount which indicates that some negative skew is present whereby there are families which tend to have very low debt levels compared to average (Medhi, 2015).

(c) The relevant scatter plot along with trend line is depicted as follows.

(d) The regression summary table is reflected as follows 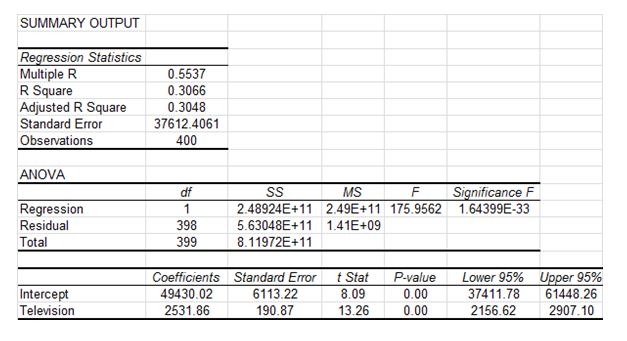 (e) The R2 value is 0.3066 which implies that 30.66% of the changes in the total debt level of the family may be accounted for by corresponding changes in the TV viewing hours per week. As a result, the fit of the model does not seem good (Medhi, 2015).

(f) The requisite hypotheses are as stated below.

Null Hypothesis: Slope is insignificant and hence can be assumed to be zero.

Alternative Hypothesis: Slope is significant and hence cannot be assumed to be zero.

The relevant output for hypothesis testing is shown below.

Part 4
The given sample data in the quantitative analysis assignment has limited presence of skew and thereby is close to normal distribution. This is also confirmed by the histogram for the two variables in the sample data provided. As per the statistical analysis of the data collected, it is apparent that there is a linear relationship of significance between the weekly TV viewing hours and the total debt level of the family. The correlation coefficient and the scatter plot indicate that the underlying relationship is positive thereby leading to some support to the hypothesis made by the sociologist. However, the magnitude of the relationship referred in this quantitative analysis assignment is rather moderate and not very strong. It is imperative that further analysis needs to be conducted in this regards especially with regards to possible presence of any confounding variable which could lead to the above relationship. Quantitative analysis assignments are being prepared by our management homework help experts from top universities which let us to provide you a reliable top assignment help service.