Task: Develop a project management essay on the project failure of Starbucks in Australia.

The current essay is based on the project failure from a well-established business – Starbucks Australia. Starbucks Corporation is a famous American coffee chain founded in 1971 in Washington. Currently, the company has headquartered in Seattle. The company is currently operating under its CEO, Kevin Johnson since 2017. Starbucks holds over 31,200+ outlets worldwide with over 346,000 employees. The company has a revenue of USD 4.07 billion (2019). It is regarded as the main representation of the second coffee culture wave in the USA. Starbucks started its operation in Australia back in 2008 to expand its market. However, the Australians did not adapt the products from Starbucks due to its poor assessment of local flavors and countless other options.

Project failure is a new atmosphere is common, and most of the businesses are failing to understand the reason behind the unacceptability from the audience or facing uncertain consequences that led that project to get obscured. The same thing happened with Starbucks when they wanted to enter another international market in Australia and did not come strong as a competitive business profile. The current essay is aiming in understanding the reason behind Starbucks ' failure in Australia and the presentation of appropriate solutions. The significance behind the current essay is discussing the steps from the Project Management Institute (PMI) with the PMBoK guidance and development of Contingency Theory to frame the recommendations effectively.

Starbucks is the most well-known coffee brand in every household of America and every American receive their first-morning coffee dose from there only. However, it has been analyzed by the company that Australia is by far the most competitive and toughest market to land a foot on. The first mishap happened by Starbucks is understanding the Australian minds, their preference towards the Australian brands, huge competitive market (such as Gloria Jeans, McDonald’s McCafe, and other local brands), expensive products and not meeting the culture with offered products.

Starbucks has started its business in the Australian market back in the 2000s. in 2018, the coffee industry in Australia has experienced revenue of $6 billion with its popular invention at the global marker – the famous espresso(Turner, 2018). However, once rapidly grew businesses of Starbucks in Australia had to close 70% of their outlets and leaving only 23 stores throughout the whole country(Turner, 2018). During the first seven years of Starbuck's operation in Australia, the company faced a huge financial loss of $105 million and was forced to close 61 stores(Turner, 2018). The main problematic ingredient to Starbucks ' business in Australia is its flavor. While Australians are fond of the bitter taste of the coffee, Starbucks is known for providing sweet coffee with various shakes and frappes. On the other hand, there is already a vast coffee industry in the country that generates many competitors even for a well-known global coffee chain. 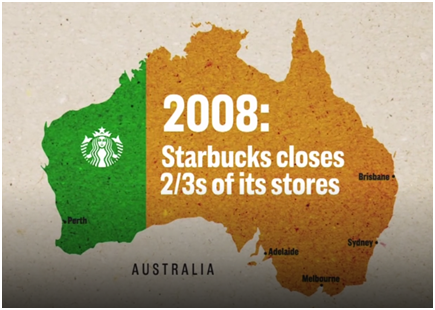 Other than the taste, the major failing areas can be related to the lack of adaption of the local culture and environment, fast integration of the brand's existence at the Australian market, and having an extensive range of competitors in an international field. During the initial entrance of the company, Starbucks did not plan for customization on its menu that heavily represents the taste of Australians. One of the best examples might be McDonald's, who entered the Indian market with recipes that represent Indian food culture(Arora, 2019). It was also a danger sign for the company to integrate its market in Australia by opening stores in various locations(Arora, 2019). It became so easily available in Australia without having any customized taste that can attract the citizen. After facing huge financial loss from its starting in Australia, the company took loans from the USA to operate their stores longer than it requires.

Economic environments are different in various business strategies (Pearce II and Michael, 2016). So, it is important to know the strategies first before starting a business on any area of the world. It can be said that in the year 2000 of July when first Starbucks opened their stores in Australia in Sydney, they expand their company at an increased way across the parts of Australia. They build up 87 stores by 2008 across the whole continent of Australia (Turner, 2018). The problem aroused in the company of Starbucks was due to their thoughts. They started to think that their model of the business could easily roll out to all the environments of Australia. They started to think that there is no need for them to adjust with the people of the continent. Starbucks should read the market strategies like MC Donald’s, when they launched in India, they create their menu according to the Indian customers’ choices(Arora, 2019).

Starbucks wanted to increase their business in Australia at a huge rate and in a very fast way. Without knowing the state of the Australian market, instead of integrating slowly into the market they became busy in growing their empire rapidly. Every business industry has to go through a research before developing business about the people of that area where the business is developing and their culture (Turner and Endres, 2017). They opened multiple stores in multiple locations without counting the economic profit or loss. As a result, the people of Australia did not get the opportunity to develop their appetite for the coffee of this Starbucks brand. Starbucks became cheap in the eyes of the Australian people, as it is easily available in the roads of Australia in every part of the continent. That’s why the Australian citizen does not need café like Starbucks who served sweet coffee with overly pricing.

Starbucks has to gone through a detailed study of starting businesses, where they can learn about the Australian market and how to approach the local customer with the customized menu. As they open their stores in an increased way, they become more available to the customers of Australia. Businesses always has to maintain the growth of demand amongst the people to develop a business (Artanti, Untarini and Sanaji, 2017). There were many more other options for the Australians other than Starbucks. When Starbuck closed many shops in Australia or leave the parts of the continent the customers doesn’t even bothered to take care of the brand because Australia already has many coffee stores, where they can get their coffee according to their need. One main reason is that the people of Australia are not a good consumer of coffee. Though Australia has the huge coffee market and it is the world’s biggest one. But they imported the coffee culture from Italy. To the local people of Australia, they use cafe as a role of meeting friends where everyone could sit and talk like a local barista. Whereas, Starbucks offered a sugary drink which was disliked by the people of Australia and the prices were also high comparing to the local cafes. Starbucks’s coffees are overpricing, which making it less approachable towards the customers. Thus, they are likely to go local baristas than Starbucks.

Starbucks in Australia has reasons for the failures. They are not adapting to the market before launching the Starbucks, they did not approach the customers with the customized menu, the company’s overpricing coffees and also making sweet coffees are main reason in the Australian market. The company should study the market before launching it to prevent failure. It should research the competition of the market and then should start the business. The business authority should think globally but act locally to stable the business in the international market. They should create their business model according to the environment of the market which will attract the customers in a particular place. Like, Starbucks should personalize their menu according to the Australian consumers. The company should act slowly, they should not open as many outlets they want. It confused the customers of Australia and become easily available to the customers. The company should research the market strategy to prevent the loss of Starbucks.

The research shows that Australians have the biggest coffee markets in the world. The company could not match up with the other competitors of the market. Starbucks should follow the competitor’s strategy before opening the outlets Starbucks. Australian Starbucks should change the menu because Australians are not very approachable to drink sweet coffee that Starbucks served. The prices of the coffee should not more than the local cafes, cause the locals are not going to pay more which they can get easily from the local barista. Starbucks company should research properly while introducing it to the Australian market. The business model should be created in a way that will be distinctive and have a dynamic presence in the market (Tallman, Luo and Buckley, 2018).

Figure: The underlying theory of Project Managements (Koskela and Howell, 2002)

Figure: Five phases of Project management(created by the author)
The first phase includes the initiation of the project. The company should define the project before start doing it. In the phase, the company should research the feasibility of Starbucks in the Australian market. After doing that the stakeholders should decide if the project should be executing or not.The second phase is to plan out the whole project before doing it. The phase typically follows two popular methods one is S.M.A.R.T. and CLEAR.

Other than the S.M.A.R.T. method, there is also another way to manage the project. The C.L.E.A.R. goals will help to encourage the employee to work together and also teach that the bigger goal should be broken into smaller ones achieves it quickly. Starbucks should also check what the local needs and how to develop the business. It will help the company to turn back again into the Australian market.

Starbucks has seen failure in the market of Australia. People in Australia are not approaching the café as it should be. With the help of the project management theories, the company can turn its business in the market. The company should break down the goals into smaller parts to achieve the goal efficiently. The project management theory will help to give a visual representation of the project, which helps to do the project seamlessly. With the help of the Gantt chart and graphs, Starbucks should know about the competitors of the market and how to deal with the local customers. The contingency theory will help to know about the potentiality of the specific situation of the risk. It will also give lessons to the company on how to mitigate it if the risk again rises in the future.

Starbucks in Australia has already faced a loss in the business. Most of their outlets are getting shut down. People in Australia are not much eager to approach the café. The company is facing problems because they did not adopt any strategic plans while launching Starbucks in the Australian market. Australians are big coffee lovers in the world. They are serving sweet coffee which becomes the biggest setback for the café. The pricing of the coffee is too much than the local café. So, the locals are not approaching Starbucks for paying more for the coffee. That's why Starbucks should adopt a strategic plan to expand its business in Australia. With the help of correct research and plan, they can improve their business.