Task:
The project management assignment will involve groups completing a written report, based on a case study involving a complex project. Report will be a maximum of 1500-2000 words.

Group reports need to provide a detailed understanding of the case study. All arguments should be supported using insights and relevant examples, drawn from the case study.

Finally, in terms of complexity types, report need to graph their relative weight and be supported by a coherent argument and discussion.

Introduction and Complexity Factors
The report on project management assignment is prepared on BP Deepwater Horizon (BPDH) case study. One of the worst environmental disasters occurred on 20th April, 2010 when an explosion tore through Deepwater Horizon off-shore oil rig. It resulted in taking live of 11 rig workers and 17 members suffered from major injuries. The disaster resulted in spewing of oil and methane case for 87 days from an uncapped wellhead that was placed one mile below the ocean surface. As per the government estimates, the incident resulted in the spilling of 4.2 million barrels of oil in the Gulf of Mexico. The project was a challenging and complex task and there were numerous resources and stakeholders involved.

Causes of Complexity Factors
There are several complexity factors that are usually associated with a project. These can be grouped in five major categories as unhelpful behavior, failure to appreciate systemicity, faulty models, simplistic project management, and over-ambitious strategic management (Davidson Frame, 2014). These factors are also identified with the BP oil spill case. Managers associated with Macondo project were primarily focussed on cutting back the time and cost involved in the project. The engineers involved were pressurized to dig faster to improve cost efficiency levels. The rest of the risks, such as the ones associated with quality management and safety were not give due diligence due to incorrect priorities and inappropriate balancing of the project areas (Gravitt, 2013). At the time of well blowout, the project was already ahead of its estimated schedule and cost. The variance of 6 weeks and $58 million was recorded in the areas of time and budget respectively. BP executives also did not own up to take the responsibility of the incident and blamed the contractors for the accident. The then CEO, Tony Hayward also issued insensitive comments in the media worsening the situation rather than implementing the measures to recover from the disaster.

The lack of systematic procedures for risk handling and change management were also absent from the project. BP made a number of changes in the temporary abandonment procedures. There were changes also made to the depth of the cement plug that was to be set within the wellbore. Such major changes did not include any formal risk assessment to determine the possible issues that could arise and the preventive measures that could be adopted. Static risk management techniques were used in the project to handle the issues (Lavanya and Malarvizhi, 2019).

Minerals Management Service, MMS was the only regulatory body involved in the BP’s Macondo project. The standards used by MMS as guided by American Petroleum Institute (API) were not sufficient and effective to carry out the key pressure tests. The combination of all these complexity factors promoted the overall project complexity and also led to the failure of the project.

ICCPM Outcomes/Contributing Factors
There are several factors that contribute towards the complexity in a project. One of these factors is the uncertainty and ambiguities in the project that are not estimated properly. In the BPDH case, the risks and uncertainties associated with the project were assessed and managed through the static framework. However, the project underwent minor to major changes throughout the lifecycle. The risk assessments and determination of the ambiguities for such changes was never considered by the management and BP executives. It led to the inability to determine the possibilities of failure and it is one of the primary reasons that enhanced the overall complexity. It contributed towards the incident of oil spill and the lack of anticipation resulted in the poor damage control and disaster recovery measures adopted in the project.

The cement used in this case was not up to the market and there were not enough tests conducted to properly check and validate the quality parameters. The cement integrity tests were also not properly performed. The lack of testing and verifications is found to be a major factor that contributed to the overall failure. The lack of communications in terms of the non-sharing of the test results and delay in sharing the results is also identified a major factor that led to the gaps and these gaps were then converted to the reasons for failure.

External varieties as per Ashby law
There are external varieties also identified that led to the enhancement in the overall risk and the associated probability. The environmental safeguarded eroded and these exposed the natural resources and surroundings at high risk (Ross, 2014). The 1978 Outer Continental Shelf Lands Act Amendments ensured that the complete inclusion of the environmental protection will be covered. The Act covers the mechanisms on the handling of the outer continental shelf. It also makes sure that the aspects around economic, social, and environmental factors associated with the renewable and non-renewable resources will be effective handled. However, these promises were actually not fulfilled and there are environmental concerns that are determined in leasing the location and timing.

MMS regulations were also not sufficient to manage and control the risks that came up with Deepwater drilling. A number of critical decisions and operations were carried out without proper audits and reviews. One of these examples is the negative pressure test. The requirement was not specified and there was no protocol defined. It is, therefore, considered as one of the primary reasons behind the blowout. The cement testing also had the similar loopholes. The lack of effective testing contributed significantly to the issues. A successful sports franchise (for example, rugby league) may be defined as having greater variety than that of losing side. Although that losing team simply trained and built several defensive systems, the opposing team's offensive tactics became too varied, resulting in them performing better. 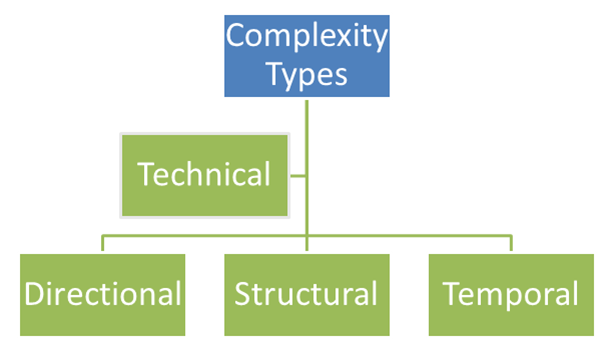 Technical complexity is associated with the concerns and issues around the technical aspects or designs. These can have severe impacts and the resolution of the issues can also be difficult due to high levels of complexity. Directional complexity is the one in which the goals or the directions to achieve these goals are not defined effectively. Usually, these arise in the initial stages but it is possible that the complexities are seen at any time during the entire lifecycle (Shepherd, Haynie and Patzelt, 2013). Structural complexity is associated with the complex structure of the information pathways. It is primarily due to the interrelated and independent processes. Temporal complexity is the one that results from uncertainties and with modifications of the internal or external project environment.

Technical complexity factors
Cement formulation was not up to the mark and one of the reasons behind it is the lack of the cement test. The seal was not properly made. There were two methods used to seal the bottom of the people. It was filled with cement and it comprises of a couple of mechanical values to make sure that the oil and gas flow could be stopped. None of these measures worked and oil along with gas could flow through the pipe.

Mud-gas separator involved in the process could not handle the load and the overall design issues contributed towards the complexity of the entire process.

Directional complexity factors
Risks and uncertainties associated with the project were assessed and managed through the static framework. However, the project underwent minor to major changes throughout the lifecycle. The risk assessments and determination of the ambiguities for such changes was never considered by the management and BP executives.

Testing procedures were conducted in the timeframe of February to April and there was only one test that passed. The final outcomes of the testing procedure were not shared with BP in time. These results were sent one week after the accident took place.

Structural complexity
Managers associated with Macondo project were primarily focussed on cutting back the time and cost involved in the project. The engineers involved were pressurized to dig faster to improve cost efficiency levels. The rest of the risks, such as the ones associated with quality management and safety were not give due diligence due to incorrect priorities and inappropriate balancing of the project areas. At the time of well blowout, the project was already ahead of its estimated schedule and cost. The variance of 6 weeks and $58 million was recorded in the areas of time and budget respectively.

Temporal complexity
The crew carried out various pressure tests to determine whether the well was sealed or not. The results of these tests were misinterpreted, so they thought the well was under control.

Complexity due to poor decision-making 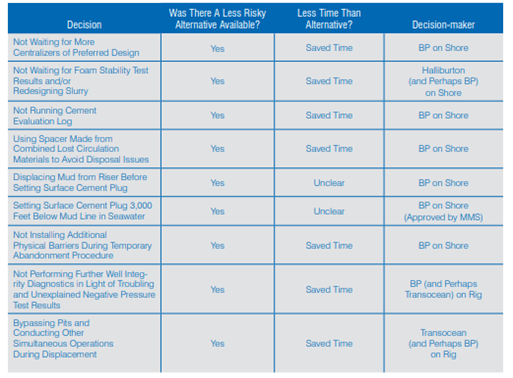 One of the major issues in the entire project was the incorrect decision-making. Poor decisions were made by the management and the entire project team members at various stages of the project. These decisions were reflected in the procurement processes, execution stage, testing mechanisms, communications, and numerous others. These faulty decisions had massive impacts and played a major role in promoting the overall complexity levels of the project. 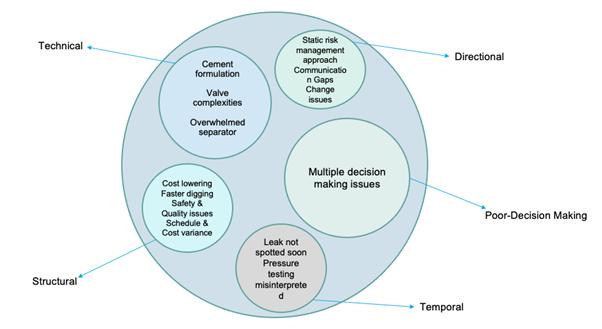 The above radar diagram is constructed based on the earlier complexity types identified. The size of the circle represent their overall impact on the failure of the project.

The skills and competencies are mapped with the complexity characteristics in the table above. With effective risk management skills, it will be possible to estimate and assess the risks in advance (Too and Weaver, 2014). The handling and control of uncertainties and ambiguities as occurred in BPDh case will also be managed well. With management and leadership skills, the changes will be recognized with determination of the reasons for internal and external changes (Bard, 2015). It will lead to effective controls. The benefit realization will be improved with better estimates and risk planning with analytical skills. The planning and estimation skills would have made sure that the variances were managed better.

Conclusion
The entire case lists down numerous issues and complexities that were present in the project. The project team did not conduct sufficient tests, the management decisions were faulty, and there was improper leadership in place. After these issues emerged, the management did not own up to these issues that indicated the ethical issues of non-compliance (Bard, 2015). The response to the entire process was not adequate and it raises several questions on the decisions made and the overall methodology adopted.