Background: In recent times, single use plastics have been banned in several countries. The impacts of these plastics on terrestrial and marine animals and on the environment in general have been reported by several organisations. For example, The United Nations Environment Programme states that on average, 2.5 plastic bags are found inside the stomachs of cows in Western Kenya! Hence Kenya banned the use, manufacture and import of single use plastics in 2017.
Task: Define what ‘single-use plastics’ are. Explore with specific examples the scale of such plastic pollution and how it contributes to land and marine pollution and affects food chains. Discuss three major ways to tackle plastic pollution (e.g. avoiding usage, global initiatives, alternative materials) and provide examples of successful implementation, focussing on degradable and biodegradable plastics (definitions, composition/chemistry) and any setbacks in using them globally.

Summary:
The present plastic pollution assignment is focused on exploring the use of plastic which is a lightweight material that can be transformed in numerous ways and has a number of applications. Though it is beneficial and makes human life more comfortable on a day to day basis, it has a negative side as well. Most of the plastics are non-biodegradable and slowly breakdown into smaller fragments which is known as micro plastics. These micro plastics are common in beaches because of abrasion of waves and high ultra violet irradiation, while the process of degradation over there is comparatively slower because of the reduced ultra violet rays and cold temperature. Since 1950, there is a huge increase in the plastic production as compared to other materials.

Single use plastics pose a major threat to the environment, including both animals and humans. Policy interventions and public awareness are the two main solutions that can be used to deal with this problem.

Single use plastics: bad or good?
Plastics which are disposed or recycled after single use are called single use plastics. These plastics are commonly used for making wrappers, bags, straws and packaging. Plastic was invented in 19th century but it gained popularity in 1970. Eventually with time the manufactures began to replace the traditional glass or paper with more affordable lighter and long-lasting plastics like milk jar where replaced by jugs made up of plastics. Since then around 8.3 billion metric tons’ plastics are been produce and half of them are made in past fifteen years alone. (Paul, 2017)These plastics are very helpful for disable person (straws), for doctors (surgical gloves). But these cases considered in the context of plastic pollution assignment make a small portion of single use plastics. According to a study on 2017, almost half of the non-fibrous plastics, that eliminate synthetic fabrics like nylon and polyester, arise from plastic packaging alone, maximum is for single use only. (The Straits Times, 2017)

One main cause of concern with the single use plastics is fact that it is difficult to recycle them, as while trying to recycle they fall into the crevices of the machine. Due to this reason as outlined in the plastic pollution assignment, recycling centres often do not accept these types of plastic waste.

What is the impact of plastic waste on environment and health mentioned in the context of plastic pollution assignment?
Plastics found in the surroundings of animals both on land and in the ocean, pose a significant threat to them. Recent studies have shown that these plastics upon being ingested by the animals, eventually reach the humans through the food chain. (The Summit Foundation, 2017) Detection and removal of plastic waste from environment becomes even more difficult when it breaks down into microplastics. There have been innumerable cases of microplastic when eaten materials accumulates inside the body of the animals and block the breathing passages or causes various health problems like punctured organs and lethal intestinal blockage. According to a recent study, 90% and 100% of the seabirds and turtles respectively have plastics in their guts. (L.G.A. Barboza, 15 August 2015) 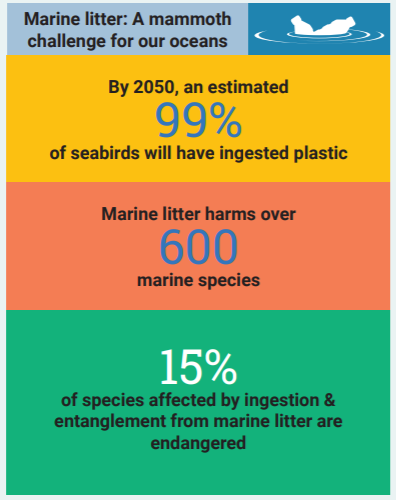 Various scientists estimate that by the year 2050 there will be more plastics present in the ocean compare to fish. This plastic issue mentioned within this plastic pollution assignment is not only killing the marine creatures each year it’s also contaminating the seafood upon which humans have relied on for ages. (D.D.A. Miranda, 15 February 2016)

These waste materials can become disastrous for human beings when they end up choking waterways. Bangladesh witnessed this disaster in 1988 when waste in form of plastic bags ended up clogging drain, resulting in floods across the country.

By working together various industries, government can develop some sustainable ways in order to eliminate gradually single-use plastics. Government can be compelled into policy change due to the public pressure. This is evident from the example of Bali mentioned in the context of plastic pollution assignment, where a four-year long campaign by two teenagers, led to the government to adopt a policy for phasing out plastic bags by 2018. (Cunningham, 2017)

Education and awareness become necessary in order to bring changes into the consumer behaviour, but the change cannot be sudden, it has to be gradual. A more impactful and lasting change in culture can only be brought by including the message in school curriculums and embedding it in regular moral practices.

One more option to reduce the single-use plastic packaging and the number of plastic bags can be reduction strategies. The benefit of these strategies is that they do not try to bring unexpected market changes. In order to bring a holistic change, it needs to be voluntary and based on choice.

The promotion and implementation of reusable bags:

It is stated herein plastic pollution assignment that more and more initiatives that promote use of reusable bags can be implemented. In national and local context this strategy is very effective in order to change the behaviour of the consumer and decrease the traditional plastic carrier bag’s usage. (H. Sheridan, 1 April 2020) A great promotional method was adapted by the Canadian government where reusable bags were widely embraced and promoted as green choice. In fact, many organisations offered promotional items for free.

EPR refers to Extended Producer Responsibility, wherein the responsibility of the disposal or treatment of the product at its end of life, lies with the producers. The motivation behind this instrument is the promotion of product design that is environmental friendly and better management of the material.

EPR is a take-back scheme which can be made either voluntary or mandatory. This intervention requires various stakeholders across the value chain to take back the products at the end of life. (GREGORY, (2008) ) Germany provides a great success story in implementing the EPR scheme, due to which there was a decline of 4 percent in the packaging volume during 1990-1999. South Africa provides another good example of successful EPR implementation. Though it’s voluntary, it has been able to create new job opportunities and businesses, tackling the plastic waste at the same time.

There are few challenges outlined below within this plastic pollution assignment associated with EPR:

Conclusion:
In the present day and age, plastics form an integral part of human lifestyle. The inexpensiveness and easy availability of the plastics have made it convenient for humans to throw it away after a single use. Hence, it can be concluded herein plastic pollution assignment that there is an unexpected rise in the heaps of plastic garbage all across the globe.