Task: Provide a brief account of the Perfectly Competitive Market for Tobacco.

Introduction
The market for tobacco is a perfectly competitive market, hence its market comprises a large number of traders and sellers, though its magnitude is not enough to create an impact or influence on the selling price. As it is a perfectly competitive market, the traders would be dealing with identical products in the concerned tobacco market. Since the products are all identical there will be no variation in quality or its attributes. Because of these mentioned factors, the market price of the tobacco would entirely depend on the supply and demand generated in the market rather than at the place of manufacturing (Krugman & Wells, 2013). The attributes of the tobacco market mentioned above are depicted in a figure given below. 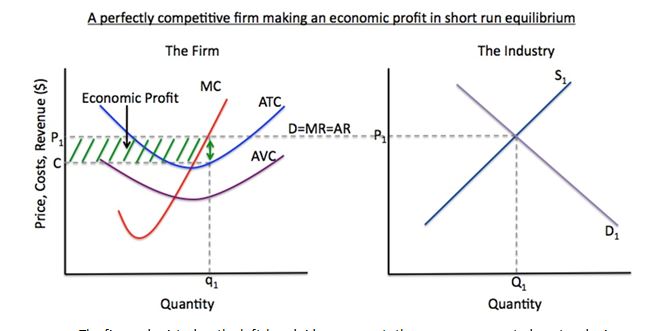 The figure depicted on the left-hand side represents the revenue generated, cost and price related to a single organization, where the figure on the right-hand side represents the demand and supply of an industry. It could be inferred from these figures that an individual firm has no control over the market price and the equilibrium price is ascertained by the present degree of supply and demand in the market. Hence the individual term is merely a price taking body rather than a price making one. The point should be noted from the context that it is the underlying price that brings equilibrium force for sustainable balance in the market. If the condition in the market provides economic profitability to short-run organizations, there will be a heavy concentration of entrants because of the nonexistence of entry barriers. Because of the elevated supply, the price of tobacco will come down to a certain level in a period which generates a condition of zero profit to the traders. This condition creates a situation of equilibrium in the market which lessens the entrance of new traders and eventually leading to the exit of the subsisting traders in the market (Mankiw, 2014).

If observed deeply the market of tobacco, it could be noticed that there are 2 issues which are accountable for the decline in the production of tobacco.

Impact of Tax: In the illustrated given graph below, the impact of the heavy tax burden on the cigarette and other products are depicted. 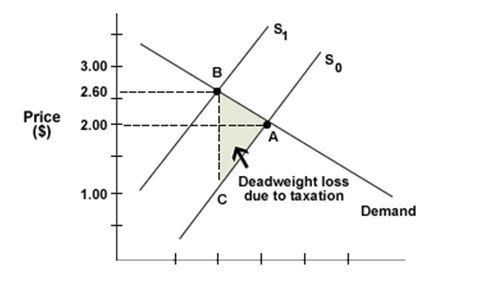 Let us assume that the taxation levied on tobacco products like a cigarette is $ 0.60 which is imposed indirectly on the customers, eventually costing the product $ 2.60 per unit. The process of increase in this burden has shifted the point of equilibrium from point A to point B. Because of the increase in the cost of the product, the demand will plunge further downwards but the supply curve might be changed from S0, the initial position to the latest position S1. The difference i.e. the net effect between the demand and the supply will consequently lead to a diminution in the consumption of cigarettes. The degree to which the consumption will plunge is determined by the fundamental elasticity of the cigarette products in the targeted market (Nicholson & Snyder, 2011).

Impact of Plain Packaging: The implementation of plain packaging policies by the Australian government has curtailed the probability and opportunity of the cigarette companies in marketing their product to the customers. This initiative of the government will reduce the demand among the youth of the nation in all possible ways since attractive packaging is the major factor which attracts the customers to a certain product thus may indirectly leading to the de-addiction from cigarettes (WHO, 2013). In the diagram given below, the impact of unattractive and plain packaging on the demand and market price is represented. 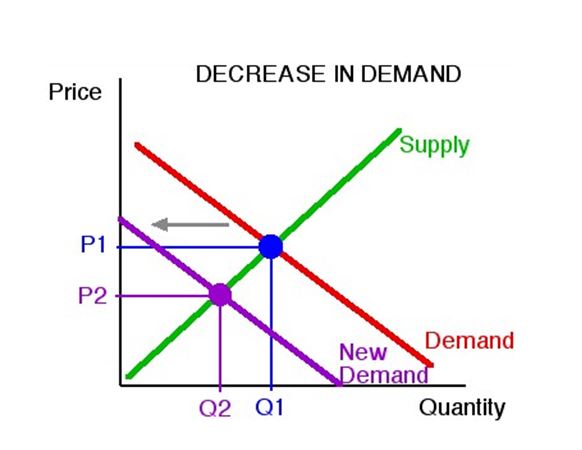 It is evident in the above diagram that the banal packaging of a product by following the plain packaging norms would eventually result in awing in the course of demand curve keeping the supply curve of the cigarette intact. Because of this dynamic change in the demand curve, both the equilibrium quantity plunges to a lower point and price of the product which you could contemplate by observing the distinctively colored lines in the graph. The above-given figure strengthens the aforementioned argument that the mediocre or plain packaging of the product will eventually reduce the consumption of cigarettes which will be a noble cause if viewed from the humanitarian point of view (Pindyck, & Rubinfeld, 2001).

The point should be noted that generally the burden of plain packaging is not levied alone, it is accompanied by the imposition of heavy taxes and surcharges which increase the price of the product. The increase in the cost of cigarettes ultimately results in the decrease in demand for it and also the diminution of the smoking trend in the society raising the risk of cheaper products simultaneously.

It is the host of factors that pushes the price elasticity of a certain product; thus, it is very important to study the collective effect of it. The components which come beneath the host of factors are the cheap availability of the substitute, basic salary or income of the consumer, characteristics of good, etc (Krugman & Wells, 2013).

It is a high possibility that the demand for the tobacco would be in relatively inelastic relation i.e, it would be less than the perfect elastic value of 1. This inelasticity caused is for the reason that the availability of cheaper substitutes in the market is highly controlled by the government agencies considering its addictive and hazardous nature. Although these actions are taken, consumers tend to buy cigarettes even if the prices are increased (Mankiw, 2014). On the other hand, the formula for Price elasticity of demand/ PED.

For an addicted consumer who is habitual to the tobacco products it will be hard and near to impossible to control his lenience to the product immediately and in only a long course of time, the person could make slight progress in controlling it. Thus the attempt to check the use of tobacco by just increasing the price of the product is not as much as productive as anticipated, hence it has a directly proportional relationship the PED ratio for this context will be less than 1. Even because of these factors, the situation could be taken under control by using the technologies like e-cigarettes which are considered comparatively safer which has the potential to reduce the consumption of cigarettes. Although the vaping machines have their limitations and drawbacks which is making it a bit unpopular in the market. It is anticipated that in the future, more safe and efficient technology would be created to decrease the PED of tobacco in the market.

In the below figure the influence of sales tax on the producers and consumers are explained. 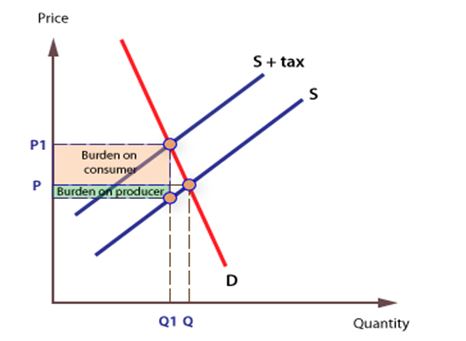 From the store demand curve, it would be contemplated that the nature of demand is inelastic for cigarette products. It would be clearer to you if observed that when the price of the predict moved from P to P1 the decrease in the measure of Quantity was only limited to a small extent of Q to Q1. The demand and the consumption of the cigarette will not die down even if the prices are increased substantially because of the inelastic nature of the product and the customer’s addiction towards it. This allows the manufacturers of cigarette companies to survive various challenges like humungous taxes and surcharges by imposing it indirectly on its consumers (Krugman & Wells, 2013). The context of the consumer burden is indicated in the graph by the pink shadowed area where the green shaded area represents the burden and liability imposed on the producers. It s evident n the graph that the area representing the burden on consumers is larger than the area representing a burden on the procedure.

If the instance of an increase in the elasticity of cigarettes because of the presence of identical and cheap substitutes happens, the area representing the burden on the customers would contract as compared to the area representing the burden on producers. This phenomenon would be a sign of the negative tactics put forward or implemented by the seller to surpass the barrier of liabilities and the burden of taxes, which has a strong possibility of backfiring as it may reduce the demand for the product. It should thus be contemplated from this perfectly competitive market report that the PED of the product plays a proportional relationship with the liabilities or sanctions imposed on it (Pindyck, & Rubinfeld, 2001). Perfectly competitive market assignments are being prepared by our marketing assignment help experts from top universities which let us to provide you a reliable assignment help online service.