Assignment 1 Specifications
Section 1: Operating Systems:The Operating system acts as an interface between the user and the computer hardware. Discuss in detail the roles of the OS as a resource manager and as an extended machine on the following systems:

For instance, the students may opt the following to answer section 1.

I. Demonstrate the following Unix/Linux commands in the lab to your tutor before week 6 and paste the screen shots of the execution in the same word file that has section 1 of the assignment.

II. Type in the following commands and discuss the outputs you get after execution of the commands. Also, paste the screen shots of the output obtained in the same word file used for above question and section 1 of the assignment.

Features of client OS (windows 7): The primary features of windows 7 is described in below.

And based on the networking it has some specific features. They are,

The features of the red hat enterprise Linux is listed below.

Section 2
OS administration:The OS administration is done by using the Linux commands. The commands are executed regarding to the questions [7]. And the screenshots are displayed [5].

i. How do you know if a remote host is alive or not? 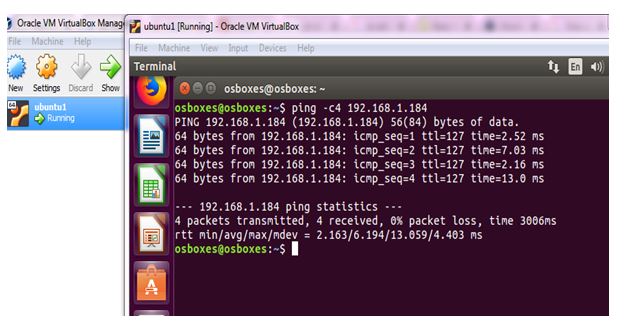 The ping command is used to check the remote host status. The above screenshot displays the statistics. Here the packet loss is nothing and the connection establishment is shown. The command is ping –c4 IP address. Here c4 is mentioned as 4 packets have to send.

ii. How do you find which process is taking how much CPU?

iii. How do you check how much space is left in current drive?

This version of the Ubuntu operating system is found as 64 bit through this output analysis. Here uname –a command is used to deliver the output.

v. In a file word UNIX is appearing many times. How will you count the number of these occurrences?

Here the UNIX word is appear in the file as 4 times. I have the file, in that four UNIX strings are there. So it can deliver the output as 4. The command such as grep –c UNIX * is used for the establishment.

The cat command execution is shown. It listed the IP address, local host address and IPV6 capable hosts. The command is used such as cat /etc/hosts.

The echo command is executed and shown. It is used to print the given input text. So the sentence such as Home Directory ls home is entered here. The output is same as the input.

The wc command is executed with who command. It displayed the line, word and bytes. According to that here 1 line, 5 words and 44 bytes are displayed.