Assignment Description: The School of Electronic and Electrical Engineering at University of Leeds, Leeds UK had gone through a partial renovation. The school has five floors. The first three floors were recently renovated. Now, according to new layout, the ground floor has a reception room with five desks, foyer for students, and a lecture hall. The first floor has a computer cluster with fifty PCs, a Basic Electronics Laboratory with 20 workstations with computer facility, a lecture hall, and five staff offices. The second Floor has two research laboratories for PhD students and postdoctoral researchers. The Research Laboratory-1 has twelve desks and the research Laboratory-2 has fifteen desks. This floor also has six staff offices and a meeting room. All desks (at reception, laboratories, offices), lecture halls need two data points each to connect to the internet. Every floor needs a wireless connectivity to enable the students and staff to connect to the Internet.

The school now requires a new LAN architecture for these floors. Further, the new LAN has also to connect with the LAN setup of other floors. Imagine you are the network manager of the school and you are required to write a report with the following sections:

Executive Summary:This Networking assignment has been prepared for The School of Electronic & Electrical Engineering, University of Leeds. In order to ensure that there is enhanced connectivity, it is required to implement networking architecture in the school. This Networking assignment includes the explanation of Open System Interconnection (OSI) model along with its history and functioning. The comparison of OSI and Transmission Control Protocol/Internet Protocol (TCP/IP) is also covered. The details of the protocols used in the OSI model at each layer and the media types used in LAN connections are covered.

Introduction: This Networking assignment has been written for The School of Electronic & Electrical Engineering, University of Leeds. The school recently went through a partial renovation and out of the five floors present in the school, three of them have been renovated. The layout for these three floors has been modified. In order to ensure that there is enhanced connectivity, it is required to implement networking architecture in the school. The student consigned us with this task because it was a Networking Assignment holding very demanding deliverables.

OSI Layered Architecture – History & Functioning
The Open System Interconnection (OSI) model was developed in 1983 by two international organizations viz. International Organization for Standardization (ISO) and International Telegraph and Telephone Consultative Committee (CCITT). It was earlier called as Basic Reference Model and was published in the year 1984 [1].

The model comprises of seven layers viz. physical layer, data link layer, network layer, transport layer, session layer, presentation layer, and application layer. The three layers at the bottom are referred as media layers while the other four are put in the category of host layers.

The physical layer is the first layer in the model that is responsible for the transferring of the data bits from the source to the destination using the media types. It may be done using Ethernet cables along with the aid of the networking peripherals, such as hubs, repeaters, etc. The next layer is the data link layer in which the data bits are put in the data frames and error checking processes are carried out. This layer is further divided in two sub-layers as Media Access Control and Logical Link Control. The concept of routing in networking is introduced in the model by the third layer i.e. network layer [2]. The data is transported by the transport layer with the aid of the transporting protocols. Session management and the flow of events are managed by the session layer. The layers supports varied connection types and can run across varied sets of networks. Data conversion formats, encryption, and syntax processing are the activities that are carried out at the sixth payer i.e. presentation layer. The topmost layer in the model is the application layer. It acts as an interface for the end-users and acquires data from the presentation layer to make it visible and accessible to the users.

Protocols at OSI Layer
The seven layers in the OSI model function with the aid of the protocols that are defined for each layer.

Media Types for LAN Connectivity
Local Area Network (LAN) requires both wired as well as wireless connectivity for carrying out networking and communication. There are different media types that may be used for carrying out the connections.

Coaxial Cable Coaxial cable is one the media types that may be used in LAN and it makes use of a single conductor in between the cable. This conductor is then wrapped up in an insulator which is referred as dielectric. It is further surrounded by a conductive shield. This adds as an additional layer of protection for the conductor. This was the initial media type that was used for local area networking. However, there were issues of slower networking and cable damage which has made it obsolete now.

Unshielded Twisted Pair Cable: The second form of media type that may be used in the LAN connection is unshielded twisted pair cabling. It is also referred as UTP and is one of the most commonly used media type. There are four twisted paired wires that are present in it and the categories are allotted to each of the four wire types. There was a new category added in the year 2000 which is referred as category 5. It is the category of wires that supports wired LAN connections, such as Ethernet.

Fibre Optic Cable: The fourth and the most commonly used and applied media type in the current times is the fibre optic cable. It is also referred as wave guide and can be used as a single mode or multi-mode. The networking speed and performance offered by this media type is the best [5].

The difference in the media types is as shown in the table below. 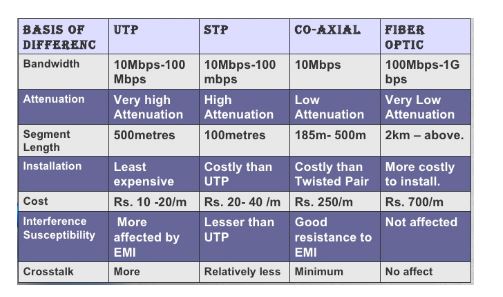 Conclusion
It is hereby concluded in this Networking assignment that Transmission Control Protocol/Internet Protocol (TCP/IP) and Open System Interconnection (OSI) models have certain differences between each other. The total number of layers in OSI model is 7 and the layers include physical, data link, network, transport, session, presentation, and application layers. The total number of layers in this model are 4 and the layers include physical, network, transport, and application layers [6]. Local Area Network (LAN) requires both wired as well as wireless connectivity for carrying out networking and communication. There are different media types that may be used for carrying out the connections. These include coaxial cables, shielded twisted pair cables, unshielded twisted pair cables, and fibre optics. Networking assignments are being prepared by our IT assignment help experts from top universities which let us to provide you a reliable Networking assignment help service.

[2]M. Ilchenko, A. Moshinskaya and L. Urywsky, "Levels separation and merging in the OSI reference model for informationâ€“telecommunication systems", Cybernetics and Systems Analysis, vol. 47, no. 4, pp. 598-605, 2011.