Introduction
This project report has been created to analyse the various mines in Australia and the legislations associated with them. A study of this report will help the reader understand the most prominent forms of mineralisation found in Australia, their topographical location, and the main ores quarried in such mines. While carrying on the process of mining for resources, it is not only essential to have possessed knowledge about the engineering systems, but also the legislations associated with them. The focus of this report lies in the combination of mining engineering systems and the statutory norms related to them. Moreover, the report aims to lay emphasis on the importance of regulatory standards by elucidating on a case developed in Queensland, Australia. Various intricate details and technical information regarding mining engineering and legislation have been presented in this study.

1. Environmental impact assessment at Kakadu National Park
Mining activities are subject to regulatory norms which are essential to be noted before the mining process begins. This is because of the involvement of several authorities in the process and in meeting various other facets. Mining legislations regulate the environmental impact of the process and aim to put thresholds on the mining activities so as to reduce the impact on the assessment. The Kakadu National Park is a gigantic and biodiverse natural reserve in the Northern Territory of Australia. It is home to a large number of flora and fauna native to the area and is conserved by the government of Australia. Therefore, the mining of uranium in an area close to the Kakadu National Park would increase the risk of adding several adverse environmental impacts (Miller et al., 2015). Some of these adverse impacts include reducing the quality of surface water, ecological exposure pathways, and many others. This has been regulated by the ‘Environment Protection and Biodiversity Conservation Act, 1999’, that provides a framework for conserving the Australian biodiversity and environment (environment.gov.au, 2019). This Act was enacted in July 2000, and replaced the ‘National Parks and Wildlife Conservation Act, 1975.’

Table 1: The Environment Protection and Biodiversity Conservation Act, 1999
(Source: Created by the Author)

2. Significant forms of mineralisation in Australia

Table 2: Forms of mineralisation in Australia
(Source: Created by the Author)

The provisions of these acts and regulations control the practice of mining in the area of Queensland. As per the requirements of the legislation mentioned above, a mining operation has to ensure complete safety of its workers operating in the mines. The Acts define the concepts of mining and quarrying and explain the risks associated with the mining operations. In general, the Acts and regulations in Queensland provide for the following provisions (legislation.qld.gov.au, 2019):

The safety and health management system of the mines should contain the following provisions:

Adani had to carefully consider the frameworks developed by the state legislations before carrying out mining activities. It is evident that the government of Queensland pays adequate attention to the health and safety of the miners working in the state territory (Apoh et al., 2017). Therefore, Adani had to consider the following requirements as per the provisions of Section 89 of the ‘Coal Mining Safety and Health Regulation 2017’ (ecolex.org, 2019):

The Australian government does not adhere to the ‘Work Health and Safety’ standards in the mining industry. Instead, these standards are regulated by the Australian states and territories according to their legislative frameworks (safeworkaustralia.gov.au, 2017). For instance, there are separate mining statutory frameworks for different jurisdictions like the New South Wales, Victoria, Queensland, Tasmania and Western and South Australia.

4. Longwall coal mining method
Longwall coal mining is a method of subversive mining of coal, whereby a long wall of coal deposits is excavated in a single slice which is generally 0.6 to 1.0 metres thick. The slice of coal that is being excavated (also known as the longwall panel) is naturally 3 to 4 kilometres long and about 300 to 400 metres wide. The longwall mining method is of two types – the advancing and the retreating longwall mining. The latter is the method where the gate roads are driven into the block limits from the main headings and are later connected to a roadway for the installation of the face equipment. In other cases, the gate roads may also be connected to a set of different roadways for the purpose of ventilation. After the installation of the face equipment, the production commences with the face receding towards the main headings from the back limits. This is done to finish at a position so as to leave the barrier pillar to defend the latter headings (undergroundcoal.com.au, 2019). Since the gate roads are long, it is usually important to drive two or more face equipment at either side of the block. The roadway that is to be used to gain access into the longwall is called the ‘main gate roadways', whereas the other sets of roadways are usually known as the ‘tailgate roadways’. The latter is sometimes used for primary admittance, but only on certain occasions. 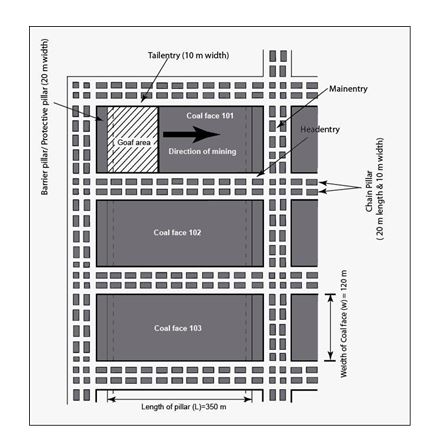 As mentioned earlier, a longwall panel is typically about 3 to 4 kilometres long and 300 to 400 metres wide. According to the overall principle, bigger longwall panel sizes are better for mining activities. This is because while cutting, typically the slowest part of each shear is at the end of the equipment face. Therefore, the wider a face is, the greater will be the availability of coal for cutting. Generally, in the case of retreating longwall mining method, the development is to be kept ahead of the producing panel (Gao et al., 2017). This is because coal transport is unable to remove the coal from the mine at the rate of which longwall can produce it. The production capacity of the longwall method is rapid, which does not allow the clearing of coal at the same rapidity. This may lead to the accumulation of coal in the mine blocking the gateways. This is why the development is to be kept ahead of the producing panel, and each leg of the transport system must have the capacity equal to, or possibly more significant than the earlier section. Also, if the development is not kept ahead of the production panel, the ventilation in the mine will be unable to handle the dust and pollutants produced – despite the existence of a drainage system.

5. Kalgoorlie gold mining operations
The Fimiston Open Pit, previously known as the Super Pit, is located in the south-east part of Western Australia. It is currently the second-largest open-cut gold mine in Australia and is about 3.5 kilometres long, 600 metres deep and 1.5 kilometres wide. The Fimiston Open Pit is possessed by the ‘Kalgoorlie Consolidated Gold Mines Pty Ltd.’ As of 2018, the mine produced about 19.5 tonnes of gold and is, therefore, one of the largest gold mines in the world by production (superpit.com.au, 2019). The mining methods used for extracting gold from the Fimiston Open Pit involves long-reach drilling and blasting. The long-reach drilling machine is used to navigate the voids in a safe manner. It allows the rig and the operator to stay firm on the ground, while the protracted drilling arm explores the void. Blasting is another method of mining in the super pit, which is done three or four times per week. The blast times depend upon the production requirements, which also regulates the number of blasts to be done in a week (McKenzie, 2016). In the Fimiston Open Pit, the engineers work in coordination with the geologists, blast and drill engineers and voids officers. The production geologists confine the area of the availability of the ore on a bench, which is mined by the blast and drill engineers.

Since the beginning of the operation, the mine has produced about 58 million tonnes of gold till date and is expected to exhaust at around 2035. The mere size and depth (about 600 metres) of the Fimiston pit requires the usage of numerous transportation equipment. The mine employs 40 haul trucks (including 36 Caterpillar 793Cs and 4 Caterpillar 793Fs), six dozers (including 4 Caterpillar D10Ts and 2 Caterpillar 854s), four face shovels, six trucks and four loaders (superpit.com.au, 2019). Each haul truck in the mine uses about $8 million of fuel every year (miningpeople.com.au, 2017). In addition to the long-range drill and hauling trucks mentioned earlier, the mine employs the use of the following mining equipment: 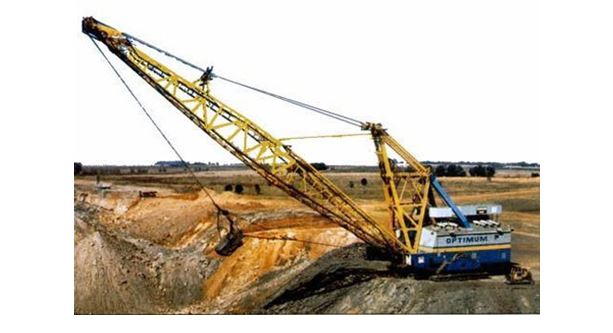 The mining operations in the Fimiston Open Pit has been following both open cut and underground mining methods over a long period of time. This has been because of the geological condition of the Kalgoorlie region. The underground mining in the area began in 1963, with the mechanised ‘cut and fill’ procedure. Various open pits have been excavated in the region, of which, some of the notable ones have been named the ‘Glory Hole’, ‘Sam Pearce Decline’ and the famous ‘Cassidy Shaft’. The mine has been switching from underground mining to open-pit mining mainly because of the challenging geological conditions in the area. The presence of numerous voids in the Fimiston Open Pit is what led to the popularity of the open-pit mining in the area. The mining operations in the Kalgoorlie region since the early 1900s have led to the creation of numerous voids, of which the Golden Mile mining is the most prominent, with a void of about 3,500 kilometres (superpit.com.au, 2019). The presence of such voids leads to numerous health and geological hazards, which is why the open cut method of mining is now used. Yet, it is speculated that the mine will be operational until 2035, only 16 years from now.

Conclusion
Australia is extremely rich in mineral and geological resources and is one of the largest producers of coal in the world. Even though the country follows extensive techniques to excavate them, the process of unearthing minerals is not limited to scientific prowess. Legislative norms are closely associated with mining, which has been mentioned in this report. The statutory criteria mainly aim for providing health and security benefits to the workers in the mines and their rehabilitation. Some of the most prominent mines in Australia have been listed in this report, along with their mineralisation properties. In this context, research has also been done on the Fimiston Open Pit in Australia, one of the county’s largest producers of gold. The hauling and drilling equipment used by the mine has been highlighted in this study. Mining engineering assignments are being prepared by our engineering assignment help experts from top universities which let us to provide you a reliable assignment help online service.