Task: Students are asked to write a critical analysis report of 1500 words (± 10%) on the following issue: The Australian Pharmaceutical Bene?ts Scheme and the consumption of medicines in Australia.

Australia has one of the highest consumption rates for medicines of all countries. The costs of the Pharmaceutical Bene?ts Scheme in Australia are increasing each year. Within the report, students must address the following areas:

The report should utilise appropriate data from the Pharmaceutical Bene?ts Scheme (PBS) as well as other relevant health and pharmaceutical-related data available in the public domain. Students should reference academic literature and analysis of the PBS to construct their response to the areas above. When appropriate, data should be expressed using charts and tables to illustrate comparisons,trends or other analysis. Students should present a clear understanding of the PBS and its ?nancial implications for the health sector and for consumers and provide recommendations on how the scheme could be made more e?cient and provide positive impacts on costs and consumption.

Executive Summary: The Australian Pharmaceutical Benefits Scheme (PBS) is probably one among the most unique schemes offered by any government globally. This is a scheme discussed in this Medical assignment that introduced economic analysis of drugs which set a model to be followed worldwide. While on the top of it, the PBS scheme sounds wonderful, it has sets of ills associated. There is also visible overuse of drugs that is result of the prescribers’ anxiety to alleviate patient symptoms. The ills of PBS and the overuse of medication need to be curbed and recommendations are made in this Medical assignment.

Introduction: A healthcare system that relies more on the philosophy of universal access is one that eliminates the financial barriers for patients to a great extent. Practically, this entails that all the citizens of Australia are given access to the newest and most suitable “medical, pharmaceutical, biological and vaccines (Glaxo-Smithkline - Australia, February 2018)” advancements as and when required. The Federal Government of Australia offers universal access to healthcare, like for instance, medical services, through its Medicare program while medicines are covered under what is known as the Pharmaceutical Benefits Scheme (PBS). PBS is a programme that essentially denotes the maximum amounts and the number of recurrences that could be funded. There is however a need for pre-authorisation that is mandatory for a few drugs to be covered under this scheme which is discussed below in this Medical assignment

. For most part of its five decades of existence, the PBS was free from any notable public inspection or any serious controversy. However, thing have changed with it coming under public gaze very recently, in the form of the dissolution of the Pharmaceutical Benefits Advisory Committee (PBAC) in the year 2001. This dissolution was essentially a result of controversial contested decisions with reference to a few high-profile drugs like for instance, sildenafil, and suggestions to boost the patient co-payments. With such increased public enquiry and deliberation, it is important that the operations of the PBS are reviewed and ways to improve the situation are recommended.

With this brief information, the current study would present a critical report pertaining to the PBS program of the Australian government by presenting evidence about the costs of medicine consumption in Australia and the reasons behind the same, before finally offering recommendations about how the current practices could be improved or made efficient by explaining the need for the same for the healthcare industry of Australia.

General discussion of the issue
PBS is probably a unique feature of the Australian health scheme. It is unique as no other government anywhere else in the world offers any scheme like this. Under this scheme, the Australian government provides to anyone residing in Australia and holding a Medicare card, a wide range of prescription medications at a subsidized price. It is as simple as consumers pay a fixed price for the Medicare card and after that, are protected from the high costs of medication by what is referred to a ‘safety-net arrangement.’

PBS is one among the several programs that are covered under Medicare and this specific program helps the people covered with the costs of prescription medicines which are made available at various places like the community hospital and private hospitals in addition to a few pharmaceuticals that are dispensed to the outpatients of public hospitals as well as also in the emergency departments of public hospital (Australian Government - Department of Health, 2019). Apart from the drugs and medicinal preparations that are listed under the general Schedule of PBS, there are a huge number of other drugs which are funded by the federal government of Australia, and these are also distributed under PBS’s alternative arrangements. The drugs include specialised medications as well as cancer-curing drugs.

Most of the PBS medications are dispensed in the nearby community pharmacies. However, few of the medications are made available exclusively through hospitals. There have been different governments in Australia till now, with almost all of them having focuses closely on the PBS scheme. 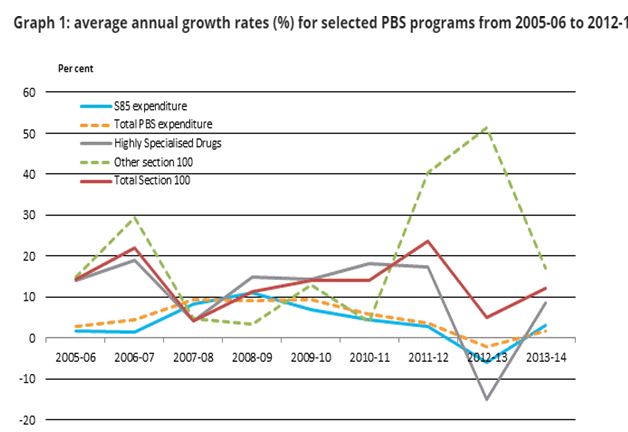 The government predicts that the average growth rate would be around 4-5 % per annum in the long-term. The deceleration of growth is partly because of various pricing policies and also the changes that have been made in the co-payment policy including the changes made to the safety-net facilities that were introduced in the year 2005. The graphs presented here are a proof to the statistics presented above.

The National Healthcare Act 1953 section 85 is the specific section that deals with medications, normally prescribed by general practitioners. The medicines that are dispensed under section 85 of this Act are normally the drugs that are used for treating ailments like hypertension, higher levels of cholesterol, diabetes, infections, depression, asthma, and a few other mental health conditions. A large part of the expenditure associated with PBS comes under this section. Despite the fact that there is a decrease in the growth of PBS, a large number of individual programs under this scheme continue to grow at a reasonably good rate. One such program is the Efficient Funding of Chemotherapy (Chemotherapy) program that witnesses an annual growth rate of 62% from 2009 – 2010 to 2013 – 2014.

What are the issues with the PBS?
Pharmaceutical companies which want their drugs to be listed under the PBS schedule are expected to make a very detailed submission as per a very comprehensive and complex guidelines. It is from the early 1990s that the guidelines set aske for both economic and clinical data. This allows the government to make comparisons and take into consideration the benefits that accrue due to medicines. It is the clinical performance of the drug that is evaluated first and then the economic considerations are brought forth. Similar products can be added to this schedule. It only requires a manufacturer to prove that the proposed drug is as effective as others that are already listed and does not cost more.

Pharmaceutical companies which want their drugs to be listed under the PBS schedule are expected to make a very detailed submission as per a very comprehensive and complex guidelines. It is from the early 1990s that the guidelines set aske for both economic and clinical data. This allows the government to make comparisons and take into consideration the benefits that accrue due to medicines. It is the clinical performance of the drug that is evaluated first and then the economic considerations are brought forth. Similar products can be added to this schedule. It only requires a manufacturer to prove that the proposed drug is as effective as others that are already listed and does not cost more.

Australia is the first country in the world which introduced the concept of economic analysis while selecting drugs for the publicly funder formulary. Several other countries had followed suit, but the Australian process of economic evaluation is the most developed and closely reviewed. The application of economic evaluation and the governmental position as a monopoly purchaser reduces the drug prices in comparison to other countries. It is a proven fact that in countries like the United Kingdom and Canada, the drug prices are greater by 150% when compared to Australia, and in USA the difference in drug pricing is almost 300% more. Australian drug prices can be compared with those in France and Spain. Despite this fact, the PBS expenditure has been consistently increasing and stands over 4 billion AUD.

One of the drawbacks for such huge expenditure is that the existing processes in PBS control prices but not prescription volumes or even total costs. The volume of drug used normally depends on the epidemiology of the patient’s condition, the extent which the patient seeks treatment and the uptake by the prescribers. One of the factors on which the number of prescriptions depends is the promotion of the product. In Australia, pharmaceutical companies spend extensively on product promotion. Usually, a drug is promoted for a few or all indications as approved by the therapeutic goods administration. PBS conditions and indications are usually narrower in nature.

What could be done better or differently?
There are a few possible methods to control leakage. This includes pharmaceutical company marketing, demanding more transparency in the decision-making process, and having a price-volume agreement with a tiered pricing arrangement. It is also argued very strongly in this Medical assignment that the pharmaceutical companies must provide information which would assist prescribers in choosing the most appropriate drug (Lopert & Henry, 2002). In 2002 – 2003, the Australian government had announced that there was an agreement with a few drug makers that would provide pertinent information about prescribing drugs listed on PBS. The medical representatives, when they talk to doctors, are mandated to brief the doctors on the PBS prescribing requirements and all drug advertising material must carry PBS prescribing information. Despite repeated calls for making PBS processes more transparent, the PBAC operations are still governed by the National Health Act of 1953. It is necessary that the processes are made more transparent and the amount of information available on public domain should increase dramatically.

What has contributed to the overuse of medications?
Healthcare providers, in an anxiety to prove that they are the best care providers tend to over-prescribe. This is predominantly to alleviate patient symptoms rapidly and ensure that their patients keep coming back to them and also refer other patients, eventually improving their revenues. This is the most important factor as discussed in this Medical assignment behind overuse of medications. In order to curb the overuse of medications, it is recommended in this Medical assignment that interventions be made at the level of medical schools itself, to promote optimization of drug usage.

Medical assignment are being prepared by our medical experts from top universities which let us to provide you a reliable assignment help Australia service.