Introduction:
In many situations where the parties defining the contract terms may intend to note down the terms negotiated upon, after which point it would become a legally binding documented contract. The key terms used to differentiate such contracts are defined as' subject to contract' in such a situation. When such an arrangement has been reached, if for whatever reason one of its participants declares that it will not be entering in a legitimate agreement with the adversary before signing into a written obligation, the question that arises is whether or not the existing agreement is valid. When determining that in this kind of situation there is a legally enforceable agreement, the participants should determine that whether there had been a willingness among the parties to be a part of a legal contractual arrangement. In this field of contract law, Masters v Cameron can be identified as an essential source. With the help of this case the court has laid out some options and fundamental principles which can be utilised to determine clarity as to whether the participants expect to be lawfully held by the tentative arrangement legally. 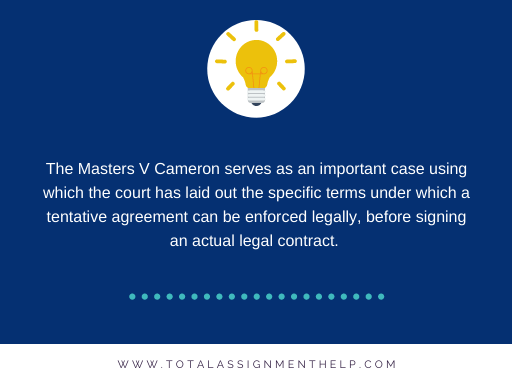 Baulkham Hills Private Hospital Pty Ltd v GR Securities Pty Ltd (1986):
In this case, the court clarified that it is of utmost importance to identify the participants ' purpose and the need for the determination of their motive, irrespective of the type of contractual agreement being addressed. The court concluded that in this specific case it was not the intention of the participants under the facts and circumstances had to be deduced by referring to a single manuscript, but rather from the terms and expressions used in various emails and messages exchanged amongst their claimants. The court then analysed the entities ' settlement (e-mail exchange). In light of this, three questions present themselves to this litigation. One, if both of the participants had come to a collective agreement during the process of settlement. If yes, then whether the agreed upon terms had the capability to be put into a legal contract form. If that is also true, then the third question which needs to be answered is whether the two parties had intent to step into a contract or not, which would make said agreed terms legally binding.

To determine whether the exchange of e-mails amongst the participants could be regarded as a legally binding agreement, then it would indicate if it was indeed appropriate to take in to consideration the subsequent conversation between both the entities and whether these conversations were coherent with a binding contract(Peden, Carter & Tolhurst,2004). The court concluded on these grounds that any instantly binding agreement to resolve the case was reached by sharing e-mails between both the claimants and the associated documents. In addition to this, the court has also claimed that the settlement was not of the form that was expected in the corresponding structured documents to be made explicit.

Masters v Cameron: In this case, the question presented before the court was whether the manuscript explaining the parameters of the selling of the property could be deemed contractual or whether it was simply an understanding on the conditions under which the parties would conduct the deal. In its ruling the court mentioned that one of the three forms listed below could be a signed contract. First, the participants have an agreement on all the negotiated standings of the bond and it is the expectation that the parties would be liable for fulfilment of the standings promptly. They further proposed that the provisions be stated again in a manner which is extra accurate and clear in a new contract, without changing their original terms. Furthermore, the participants should have settled on all the terms of the contract, but they held the implementation of any of these conditions contingent on a formal document being executed. The third instance, the objective of the participants that have agreed on the terms may not be rendered at all, unless they have executed a written contract. The court concluded that the participants were bound by law in the first two cases to establish the formal contract and afterwards meet their contractual obligations. It will be the scenario if all the information needed for broadness and intent are included in the contract and the individuals forming the legally binding contract don’t possess the ability to modify the particulars that the participants have already agreed(Collins, 2017). Although, the parties had no intention to have a legal consequence, in the case of the third type of agreement. However, if there is a chance of adding new provisions to the contract and changing the clauses already negotiated, the contract shall not be deemed legally binding. In this situation, a previous contract should have been implemented by the parties until the new settlement can be regarded as binding on both the participants. Based on the above reasoning, in Masters v Cameron, the court concluded that the interpretation was perfectly clear with respect to the clause in the contract. This specifies that the agreement will not only include the terms of the contract specified by the parties in a manner acceptable to the applicants but will also include whatever else is deemed necessary by the applicants in the case. The court then noted that it becomes apparent on the examination of the contract that the participants were a stage before the arrangement took effect. 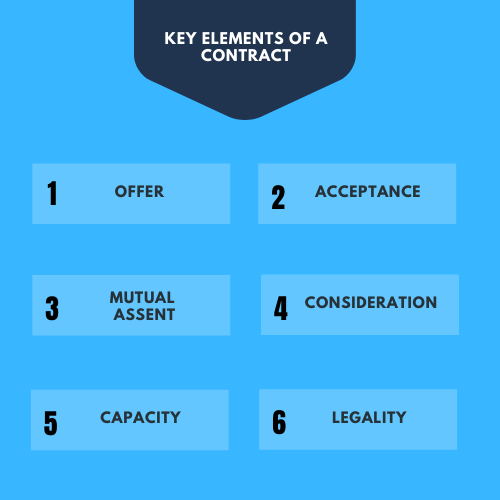 The court's rationale was that, firstly, the contract must include only the terms and the stipulations decided by the participants for the purpose of immediate motion into effect. Moreover, it is possible to carry out the objective that the contract will be bound by law, until and unless it is not specified in the existing arrangement that a waiver of a provision will be allowed after the establishment of the previous arrangement. Ultimately, the conditions suggest that the participants are not willing to be compelled by the arrangement before the implementation of a formal contract.

Baulkham Private Hospital Pty Ltd v GR Securities Pty Ltd:
Here, the problem faced by the court was whether there was intent to create a property and machinery sales contract. Whether the mails sent by the seller and the buyer could be regarded a lawfully enforceable contract irrespective of the previous deal was struck between the entities but has not yet been enforced. In this case, the court must see whether the set of documents shared by the participants could be viewed as proof of a negotiation for the selling of a building(in this case a hospital), as specified in the words' legally binding agreement through nature' are stated in one of these letters. The court concluded that a legally binding agreement was established between the entities on the grounds of the mails sent between the entities, this resulted in the court stating that the purchaser had the right to the stipulated conditions in the contract(Case & Emery, 2015). Due to inclusion of the phrase ‘legally binding’ in the documents, the situation of not considered as a third category, as established in the Masterson V Cameron case. On the contrary, these terms took the case under the scope of a addition of another category which was first acknowledged in Sinclair, Scott & Co Ltd v Naughton by the High Court. In this classification, the participants had to be bound promptly and solely by the terms of the settlement that they consented to while preparing to negotiate a binding contract that would replace the tentative contract and could even include additional terms by explicit permission.

Intention thus serves as an important component of establishing a contract that is valid and legally binding(Christensen, 2015). However, the entities may enter into an agreement except when they plan to uphold the agreement by law, it does not imply that the participants planned to come into a contract. When determining whether the tentative arrangement is obligatory on both the entities, the court must consider aspects such as the prominence and nature of the bond between the participants and the intensity of formal and informal expressions in the agreed contract. It also discusses the evidence whether there was a written agreement and if there was any written exchange or if there was only a verbal communication between the entities (Brady & Meyerowitz-Katz, 2015). 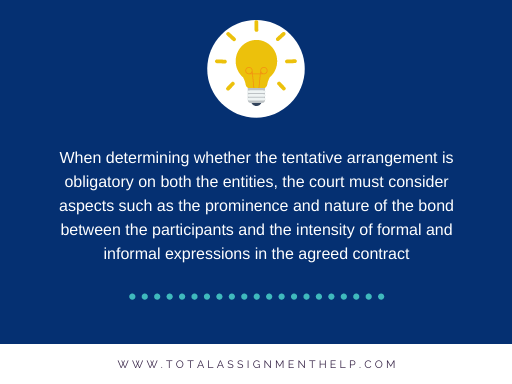 Conclusion:
For these reasons, with regards to the question of whether or not the tentative arrangement contended between the entities bind them by law, it is found that the judicial system provides four categories to handle it. Hence, if the arrangement between the participants comes under the third category, a formal agreement will not be executed by the parties. Whereas in case the arrangement between the entities comes within any of the aforementioned sections, the parties shall enter into a formal contract. Masters V Cameron law case study assignments are being prepared by our law assignment help experts from top universities which let us to provide you a reliable best assignment help service.