Merits And Demerits Of A Large Sample Size

1. Explain the merits and demerits of using a large sample size. Which aspects must be included in making sample size decisions?
In a scenario, the overall population is 69.000, with a representative sample of 15,000, which is almost 20% of the total population and encompasses around 1/5th of the employees.   The sample group of this population numbers was to be made by 383 bank employees with a 95 % confidence level and a 5% scope of error. It is essential to understand the merits and demerits of choosing such a large sample size. 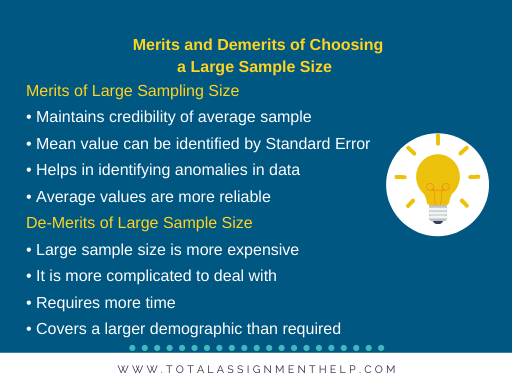 Merits of choosing a Large Sample Size
The first merit of picking a large sample size is that it maintains the credibility of an average sample as an estimation method for the parameters. For a survey to accurately represent the relevant average demography, there is often a need for a large sample size.  Furthermore, the standard error (Se) of the average can be utilized to measure the mean population expression. The Se value is important for each average sample value which is measured.  It would be viewed as a benefit because a large sample size encompasses a much larger population.

Using a large sample size assists in identifying the anomalies from the data.    Smaller samples are considered to be vulnerable to aberrations which could distort the test result. Larger samples in the study contain higher probabilities of aberrations. In several situations, though, anomalies appear to disrupt statistical calculations but preparing for it helps to give a rational image of the sample and its features. 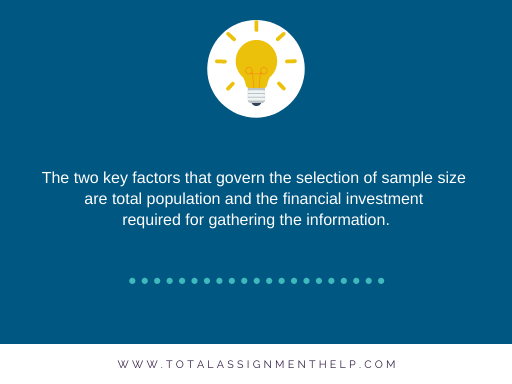 Demerits of choosing a Large Sample Size
Owing to the broad and larger representation of the research population, a large sample size is desirable, but it is expensive and complicated to deal with as well. For example, it will consume a lot of effort to sample 15,000 employees working at the Belgian bank, and therefore the financial investment incurred will be greater. It requires more time as the large sample size is distributed in the same way as the population is distributed and thus the process of data collection from a whole sample would consume a lot of time compared with small samples. The cost associated with data gathering is also greater than the cost that might be sustained in limited sample size, due to its broader scope.

Large sample size contains a much greater representation of demographic data within demography which is required. The well-distributive data gathering from such a sample group will need more money for the effectiveness of the procedure as expected.

Attributes to take into consideration when selecting a sampling frame
The two key factors that determine the selection of sample size are total population and the financial investment required for gathering the information.  When the researcher is trying to inflict reasonable cost in the procedure, the small size of the sample is considered. In that circumstance, it may also help to decide how reliable our collected information ought to be. Data collection of the whole bunch of 15,000 Belgian bank employees would significantly increase expenses involved in the procedure.

Previous knowledge about the topic of analysis can help to decide the size of the representative sample for use in the analysis. The previous knowledge can be considered when determining if the sample size should be decreased or not. As per Moher et al., 1994, the essential components which will be known from existing understanding are the previous average and deviation projections. Pragmatism is yet another consideration for the sampling frame to be weighed when selecting. In real-life scenarios, the sample size selected for use must be meaningful and realistic.

Another crucial aspect in deciding how accurate and flawless a sample will be is the scope of error. It will indicate the range or frequency at which the measured average lies, which would also assist in establishing the degree of the confidence interval. 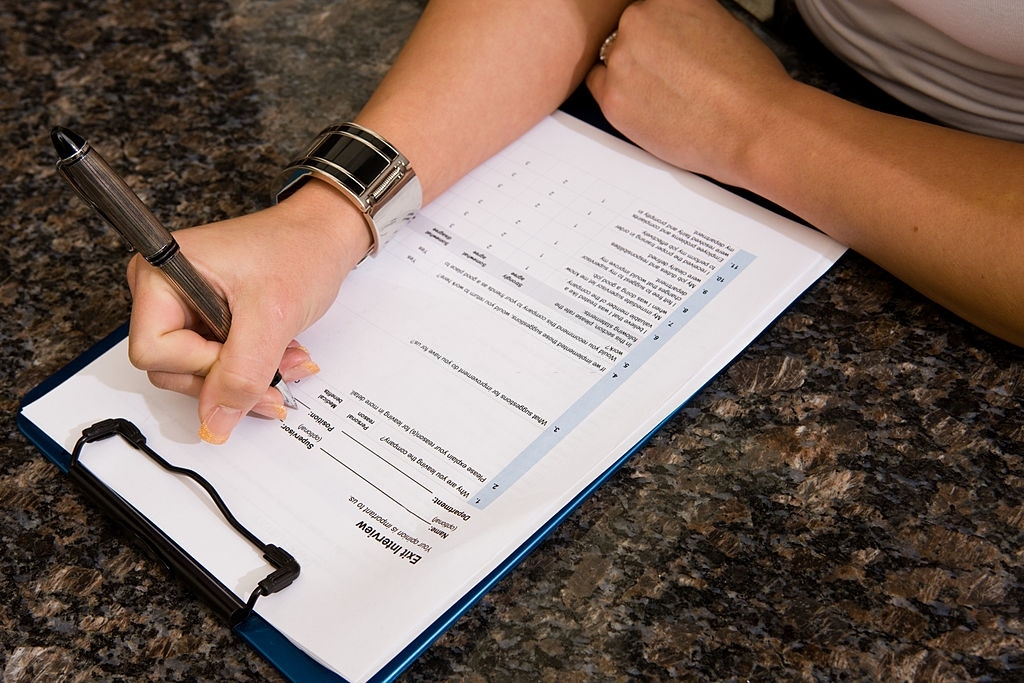 2. What are the pros and cons of the existing sampling techniques?
Bank staffs that have been included in the analysis were treated equally to be chosen by using techniques of probability sampling. The odds are made to be higher than 0; it aims to limit the subconscious biases that could occur from their decisions, thereby making it slightly open and equal for all institutions and bank staff to be involved in the procedure (Bacchetti, 2002). The scientific institutions have used a stratified sampling technique. Research groups first classified completely at random the banks that constituted the stratification than in the classified banks; in the collection, they randomly picked the employees for honesty. 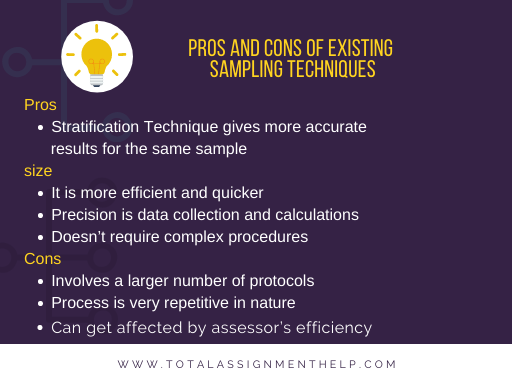 Pros
Stratification sample technique provides more accuracy to the very same sample group relative to other probability sampling technique such as the simple random sampling. In the sample parameter prediction model, specificity is essential, the statistics of each different strata will be determined, and their proximity to each other will be correlated. The method is found to be very high-effective since it requires only the arbitrary collection of various banking establishments and staff over the total population, which, due to its accuracy, makes it half efficient. It's also versatile in that you can quickly and effectively pick any number of respondents. The method often appears to be more accurate because it leads to precision in data collection as it requires the scientists smaller extend of judgement. It also provides a more simple way of screening comparison to other techniques of sampling, as it does not require long and complex procedures. Furthermore, the process of probability sampling doesn't really involve any complexity, so even non - specialist individuals can undertake it since it needs only random numeral allocation over the defined groups.

Cons
The process of choosing the sample findings is applied (stratified probability sampling process) to pick only a particular group of samples. The probability sampling is time-consuming as it involves the investigator to obey all the correct protocols, like first defining strata, and then heading down to the stratification to pick persons who will now be participating in the procedure. The process leading to repetitiveness as the investigator or the assessor would allocate numbers repeatedly to obtain the necessary information through this technique; it might have further consequences such as decreasing the assessor’s productivity. 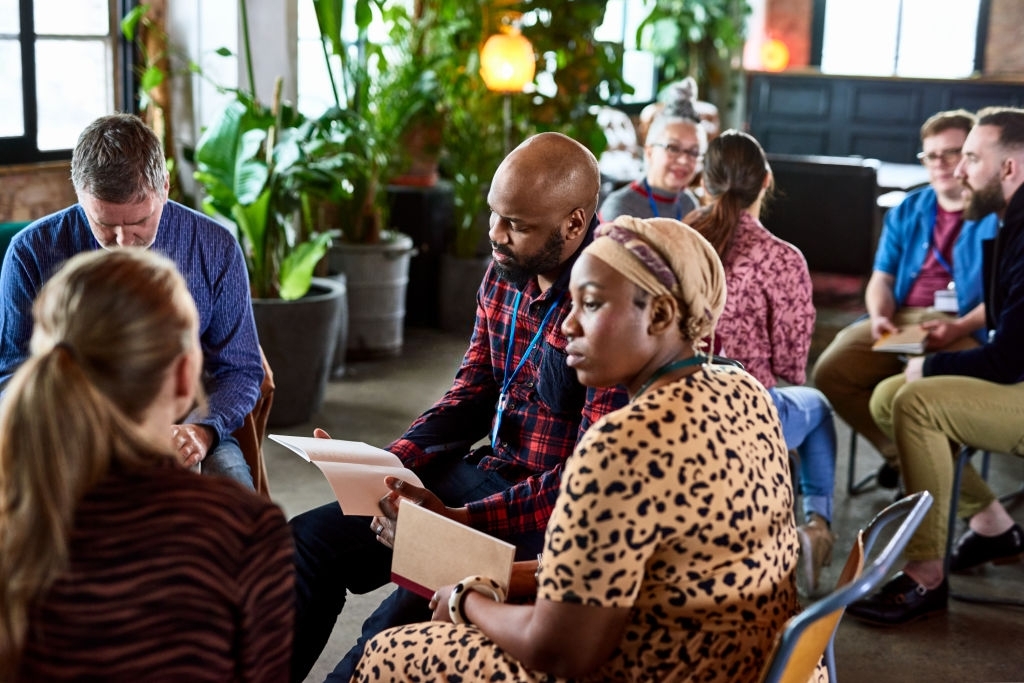 3. What ideas do you have for improving the sampling techniques?
The sampling procedure selected will affect the results of the sample for use in the research. For example, if the methodology used to test the banks has been discovered to be prejudiced, this will influence the findings and the inference to be derived from this sample analysis (Mann, 2003). So to eliminate such limitations, the investigator should make sure they minimize prejudices as much as possible in order to save the findings and their reliability. It can be achieved by randomization. It assures fair odds are provided for all samples analyzed for the study. It makes it the most efficient method that the investigator may use to ensure that all potential samples are fair while using random sampling techniques.

To simplify and develop the procedure of stratified sampling, the populations are split into categories known as strata that must demonstrate a functional correlation within the sample. In certain instances, in a study, feedback from the stratification could vary from each other. Stratification is achieved to better represent the public and to ensure that the viewpoint of each category is expressed and displayed in the survey. In several situations, classification is performed by gender to keep track of and depict the different views. Since the sampling method is subsequently associated with consistency in the evaluation; experimental procedures should be carried out. It is designed to ensure that each method of sampling selected for use to achieve study objectives is fulfilled. Determining the degree of accuracy and the costs involved for each possible approach will be significant. In this instance, as Se would be used, it will help to calculate the degree of accuracy because of the lower the value of Se, the better the accuracy of our study.

4. Describe a few of the concerns in the research process and how to resolve them in future consideration
Rather commonly, survey questions were utilized to obtain information from the participants. It's still correlated with certain difficulties (downsides) just as much as it is now favoured way of gathering data.

Duplicity was a major issue that challenged the use of survey questions in gathering data. It emerges from the participants abstaining from the investigator's facts while answering the survey. In this situation, because the questions were submitted to the participants, this may lead to the participants' lacking clarification with regard to questions for easy comprehension (Zaza et al., 2000). The wilful ignorance problem may occur from keeping what they believe to be personal for concern of divulgation and likability prejudice. However, this form of issue can be solved by maintaining that they (the participants) are aware of their confidentiality and also that their identities are concealed.

When the queries are not posed face-to-face to the participant as in this case, it could be challenging for them to answer the questions and translate them because the investigator is not there to explain what the questions require and provide guidance. It will result in a variance in the understanding of the questions caused by various answers, a few of which might not be relevant and in any way connected to the topic under discussion (Zaza et al., 2000). With well designing of the questions and making them easy to follow, understand and explain, distorted findings from it can be remedied.

The survey questions must be made available at all times. By examining the participants, the option of collecting data to be used must be established. For example, people with certain forms of disabilities, such as vision loss or deafness may not use the study to gather information for them. Difficulties of this nature are avoided or solved by making the required selection of which method to use for the collection of data.

Often, certain participants might have their very own hidden motive, and this could lead to skewed answers being given. Respondent's engagement can guide them either to the commodity or to the facilities. Survey questions which only make use of open-ended questions are challenging for the participants to evaluate. Responses collected through such sorts of tests are personalized views; therefore, the researchers cannot measure them because they differ across all the categories. It will lead to even more information to be analyzed by organizing a list of questions with several open-ended questions. Thus it can be done by lowering the number of open-ended questions and by using the closed questions.

Several of the questions left unanswered are other challenges that the investigators experience while using survey questions, particularly when the questions are voluntary. You can prevent this problem by ensuring the survey is held online and finalizing all the appropriate fields. Similarly, the question should be correct and easy to answer. 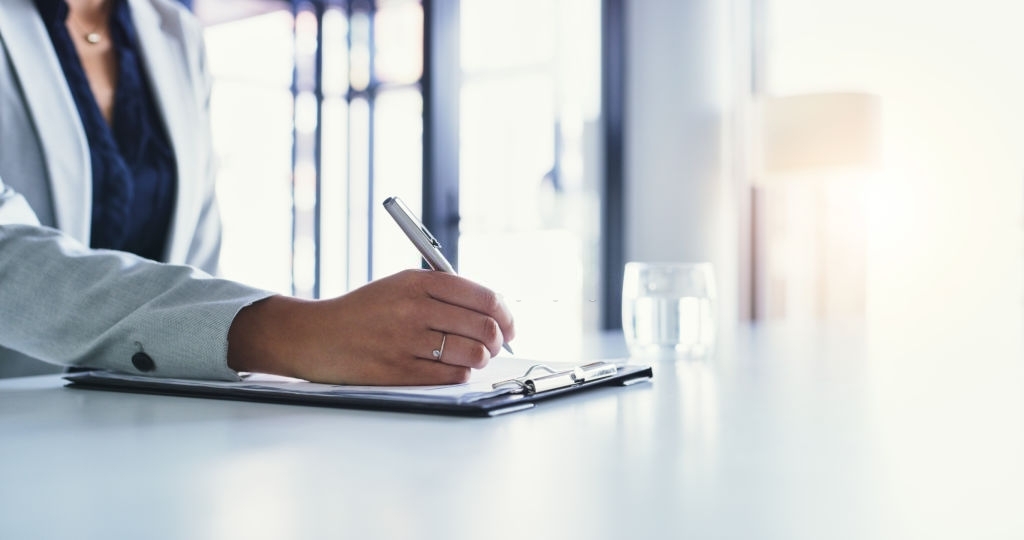 5. Which secondary Dataset could be used to verify the sample's validity and how it is used?
The datasets will be collected from the National Bank of Belgium in accordance with the Belgian employment landscape to verify the robustness of the study. It may be used as the checkpoint for research data gathered. It will also be used to collect important data from other places, such as the previous report. In comparison, secondary sources provide insightful data which is used to validate the presently being conducted analysis, thus assisting with information in the analysis’s growth. In certain instances, parameters used for the analysis are checked if there would be a correlation between them which helps to construct the model. Secondary information is often used in data gathering for large sample size whereby computing technology is being used by accessing vast quantities of data to analyze the pattern for the preceding studies. They are often used in the detection of primary sources, among several other applications of secondary information, to eradicate plagiarism.