Free sample   Information technology assignment use of robots in war

Information Technology Assignment: The Use Of Robots In War

Now follow the instructions given below to complete the assessment task:

Task 2 (17%): Applying Ethical Theories
Follow the instructions given below to complete the task.

Introduction to Information Technology Assignment
Robots are one of the most advanced technologies that are now trending and used by many companies in the place of manpower. Robots are used in almost all the field. The companies use robots for manufacturing purposes and the military authorities use the robot for war purposes. The report will discuss the ethics behind the use of these robots on the basis of the chosen case study. The report will also use various ethical theories to discuss the right or wrong on the use of these robots in the field of war. The analysis of the topic will be done on the basis of the given ethical theories by the consideration of the below case study.

There is always a debate regarding the use of robots in military areas. Some people are supporting the use of robots while some are against it because of the fear of war. The AI robots are used in the form of autonomous weapons for the purpose of defense and service to a particular nation. The case study takes the example of Phalanx that is an AI-based gun system. The Phalanx is used by the ships of the U.S. Navy for the purpose of tracking, detecting, firing and evaluating the incoming missiles of the enemy country. This type of weapon does not require any kind of human intervention.

With the passage of time, many countries show their interest in this robotic field. Israel made Harop drones and used it in the field of the aerospace industry. South Korea made a defensive robot Super aEgis II that was capable of hitting a target at a range of 3 km with the help of a machine gun.

The automation in the fields of the AI-based robots provides high-speed activity doing capacity to these robots. Some of the AI-based devices are used by the human operator that decreases its working capacity and speed (Torresen, 2018). Many big countries like Russia, China, and America are using these robot technologies for their military that helps them to increase their weapon power and make them stronger than other countries.

The AI robots are nor not so adaptable and flexible towards the new situations, especially at the time of wars. Humans are more flexible in adapting any new tool and technology in every field. There is a chance of hack in the AI-based system which could produce a problem or challenge for the country. It is important for human beings to handle these AI-based robots more carefully for eliminating all the risk factors from the advanced system. 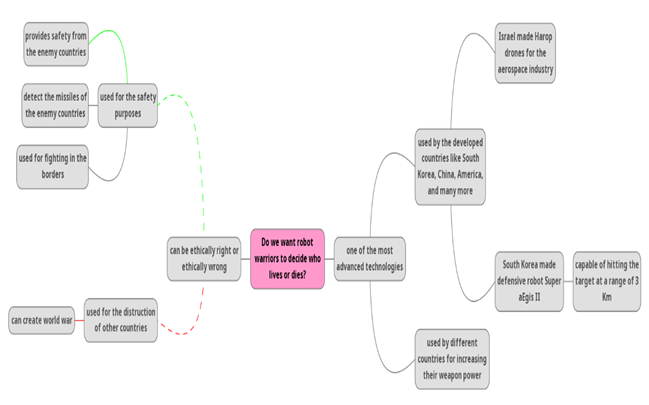 3.1 Utilitarianism Theory
This theory is totally based on normative ethics that gives priority to the consequences of the action. The theory is totally based on the positive and negative consequences of the actions produced due to the use of robots in our day to day life. The use of human AI-based robots by different countries can able to provide many important actions that can provide benefits to a country in many ways (Banks, 2018). If there is a talk about the actions of these robots then it can be seen that the robots can do many things. The action of the robots are not only limited to the military fields but the robots can produce their effects on every field.

It is totally dependent on the method of using AI-based devices or robots that in a positive or negative way they will produce their effect. If the robots are used in a proper way with the help of human operators then this would produce a positive effect. It is very much important to take the help of properly trained robot operators and designers to properly design and operate the AI-based robots to produce positive consequences (Austin, 2017). The robots can also produce negative effects. If the robots are not designed properly then it can totally damage the system and the country will be affected in a negative way.

The case study also shows that many countries like America, China, and Russia take the help of AI-based robots in their military field that produces a positive effect on their military powers (Bitzinger, 2019). They know the consequences and powers of these robots in the military fields and use the robots according to that. The impact of these robots can be seen with the help of their past activities and this would also help in deciding the facts that whether these robots can be used in the future or not. The theory can be used as a deciding factor about the use of robots in our day to day life.

3.2 Deontology Theory
The deontology theory only considers the action’s characteristic and does not give any kind of importance to the consequences of the action. It is the normative theory of ethics that follows the human actions and give priorities to these actions. The use of robots in military backgrounds produces lots of good actions for different countries (O'Sullivan et al., 2019). If we analyze the use of robots in the military fields with the help of deontology theory then we can say that this type of use can be considered as ethics. The robots are responsible for many of the good actions like security to the military or nation against the other enemy countries, finding the hidden types of equipment or missiles of the enemy countries, and other important things that are only possible with the help of the robots only. The case study shows that the sentry robots made by the South Koreans can fire on a target and enemy by the help of command by the operator (Vanderelst & Winfield, 2018). These types of facilities can produce good action through the help of these facilities by robots.

The atomization of different countries with the help of robotic weapons can create some of the negative consequences that would affect all mankind. If these robots will not perform properly then it can cost the life of a human. Any kind of malfunctioning by these robots can totally disturb the economy of a country. These are some of the negative consequences of using these robots but these things are not taken into account according to the deontology theory (Giuffrida, 2019). The theory is only based on positive actions. So, the use of AI-based robots in any field can be considered as ethically correct by the point of view of this theory.

3.3 Virtue Theory
The virtue theory is based on the thinking of an individual and considers the individual's character as the greatest key point. This theory is totally based on the thinking based actions of an individual, group, and country. The case study can be related to this by the motive behind the use of these robots by a nation. The case study shows that South Korea made a defensive robot Super aEgis II that was capable of hitting a target at a range of 3 km with the help of a machine gun (Johansson, 2018). This action was done by South Korea for protecting the country against enemy countries (Belk, 2020). The defensive robots can be used by the country for fighting against the missiles of the other countries. This is totally ethical.

The case study has also discussed that Israel made Harop drones and used it in the field of the aerospace industry. The use of these drones can be considered as ethically right if the country will use this technology for protection against the other enemy country. If the thinking of the country is good then the use of these AI-based robots are morally correct and acceptable. The AI-based robotic weapons are potentially capable of destroying the overall mankind in just a few minutes (Indurkhya & Misztal-Radecka, 2016). The case study has discussed that some of the nations are using these robots for the reason of destroying their enemy while some of the countries are not using these robots due to the fear of destruction. If the countries are using the high technologies for destruction purposes then it is ethically not good according to the virtue theory. The virtue theory does not support any of the wrong thinking by an individual, group, or by a whole country.

3.4 Contract Theory
The contract theory is based on the political and moral behaviors and values of the society. The use of AI-based robots in human society can be morally good as considers by some experts and can be morally bad as considered by other experts. If we go for political behaviors then these AI-based high technological robots can be used in the case of political rivalries (Lazar, 2018). The conflicts between the two countries can be so dangerous that with the help of these robotic weapons they can create a world war and can disturb the overall world. The authorities and acceptance of the use of these high functioned robots by any country can produce a huge social effect in our society.

As discussed in the above case study that the use of these robots is considered as a good factor by some of the countries while others consider it as bad. As the decisions by these robots can be wrong so, it is not morally correct to give decision making power to these robots. Humans are more experience and understandable in all situations (Chan, 2019). So, it is better to give the decision making power to human beings by providing the experienced operators to these AI-based robots.

The case study has discussed the systems like drones that can violate the privacy of some individuals which is not socially acceptable and morally good. The operators of these drones can enter into the privacy of the individual with the help of the use of these modern technologies. So the social contract theory is totally against the use of these kinds of robots in our society.

4. Conclusion
The report has completely presented the analysis of the use of robots for the purpose of decision making on the basis of the ethical theories. Some of the theories prove the use of these AI-based robots ethically right while some of them prove the use of these robots ethically wrong. The discussion of all the points is done in the above section on the basis of the given case study and the motive of the use of these robots in society. These high functioned robots can be used for many purposes but it can only be used when the user is morally correct. Bad thinking can completely destroy a whole country. So, it is very much important to limit the use of these robots in some of the particular fields that will help the whole of mankind. The limitation and the use of properly trained operators for these advanced systems can help a country to use these systems ethically for the benefit of the people. It is recommended that the use of AI based robots for the purpose of decision making about the life of people is good if the robot is under the supervision of an expert. A proper working robot can take the decision at the time of war or fighting against the enemy. So, robot warriors must be given the right to kill or save the enemies according to the condition.

Torresen, J. (2018). A review of future and ethical perspectives of robotics and AI. Frontiers in Robotics and AI, 4, 75.