How to Solve Cubic Equation

Task: How to Solve Cubic Equation

Strategy for solving a cubic equation:

It is advisable to follow the general equation for solving the cubic equations that can be presented as follows,

The cubic equation should be generalized into the standard form and could be presented through an example as follows,

Step 1
Since the provided equation is not in the standard form, it has to be converted into a cubic equation. To solve cubic equation, multiplication of ‘x’ with the equation on both sides is needed to get rid of the fraction to obtain,

Step 2
The generalization of the provided equation into a cubic equation is important in how to solve cubic equations. You could subtract 6 from either side of the equation obtained from Step 1 to obtain,

Considering the above equation, if p(x) is divided by (x-a) the remainder is found to be zero.

Let us consider the following problem,

The equation presented above has a solution of x= -2.

According to the factor theorem, it is evident that (x+2) could be assumed as a factor of the whole expression since the solution is presented as x= -2. Therefore, the equation:

Could be arranged in the form of,

Here ‘a’ and ‘b’ denote numbers, and their values could be obtained through synthetic division by following the steps illustrated below.

Step 1
Identify the coefficients a, b, c and d in the cubic equation provided as the problem. The values are identified as 1, -5, 2 and 24 respectively. Plot the coefficients as follows while noting the known root, i.e. x= -2 on the right side of the vertical.

Step 2
In this step of how to solve cubic equations, you should multiply the brought down number, i.e. 1 with the known solution, i.e. x= -2. The result of the multiplication has to be presented in the other line as follows. 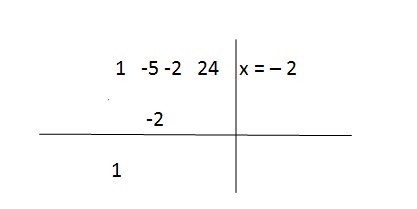 Step 3
IAdd up the numbers in the second column which would provide the result as: 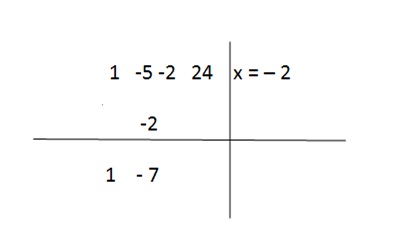 Step 4
IThe number obtained in the previous step has to be multiplied by the result of the known solution, i.e., -2. The resulting outcome has to be presented on the second row over the line on the left side as, 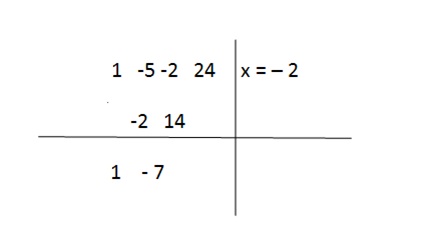 Step 5
To solve cubic equation, this step would follow the Step 3 and add up the numbers in the column to obtain 12 as a result. The result can be presented as, 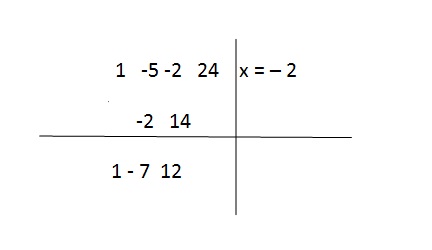 Step 6
IThe process has to be repeated to obtain the following, 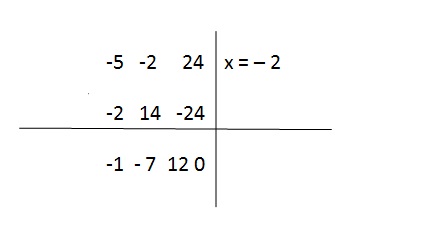 Step 7
The final result of zero at the bottom row suggests that x= -2 is a validated root of the suggested cubic equation. The outcomes at this stage are reflective of the coefficients of a quadratic equation that can be written as,

This equation could be multiplied by the factor (x+2) to reduce the cubic equation into the following format,

Step 8
Application of the quadratic term generalized the equation into,

Let us take the following equation to refine the understanding of solving cubic equation,

Step 1
In this step, you have to assume that x= -1 is a real solution and input of this value in the equation gives the result as zero which suggests that (x+1) is a factor in how to solve cubic equations. The equation can be written as,

Step 2
Following the approach of the synthetic division as illustrated in the previous example, the coefficients of the cubic equation are identified. The values are 1, 0, -7 and -6 which have to be written on top of the line left to the vertical and on the right you can write the real solution (x= -1) as follows, 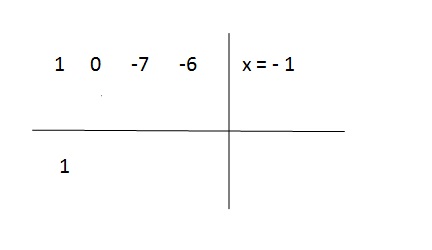 Step 3
Now you could multiply the number that was brought down, i.e. 1 with the known root and present the result in the second row as follows, 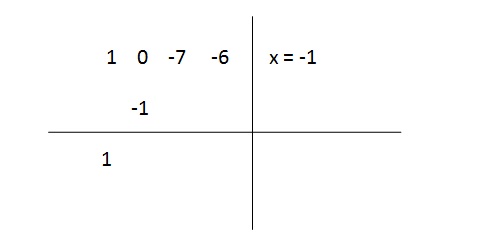 Step 4
Add up the numbers in the first column to obtain the following result, 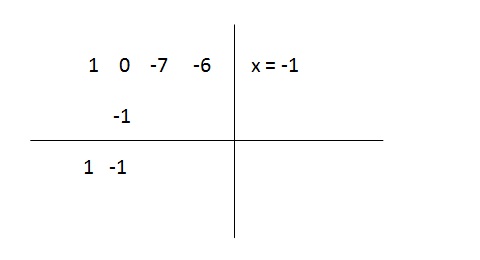 This step has to be repeated by adding the numbers in the column. The process to solve cubic equation could be stopped on getting zero as a result of the multiplication (Tignol, 2015).

Step 5
Addition of the numbers to the second column and obtaining zero as results confirm x= -1 as the known root of the cubic equation. The final solution gives the coefficients of the generalized quadratic equation. 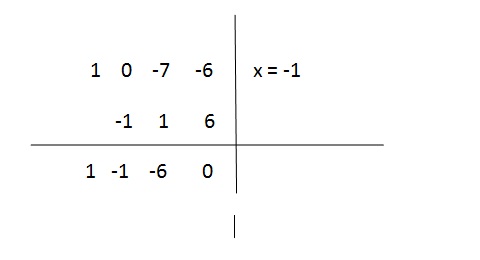 The quadratic could be represented as,

Step 6
Therefore, to solve cubic equation it was generalized to quadratic form as,

The factorized result could be identified as,

This equation provides three solutions for the cubic equation as x= -2, 3 or -1.