In a healthcare assignment of 1,000-1,250 words, compare and contrast the health status of your selected minority group to the national average. Include the following:

Describe the ethnic minority group selected. Describe the current health status of this group. How do race and ethnicity influence health for this group?

Discuss the barriers to health for this group resulting from culture, socioeconomics, education, and sociopolitical factors.

What health promotion activities are often practiced by this group?

Describe at least one approach using the three levels of health promotion prevention (primary, secondary, and tertiary) that is likely to be the most effective in a care plan given the unique needs of the minority group you have selected. Provide an explanation of why it might be the most effective choice.

What cultural beliefs or practices must be considered when creating a care plan? What cultural theory or model would be best to support culturally competent health promotion for this population? Why?

Cite at least three peer-reviewed or scholarly sources to complete this assignment. Sources should be published within the last 5 years and appropriate for the assignment criteria and public health content.

Introduction
Studies reviewed in this healthcare assignment have confirmed that Pacific Islanders have been found to become more of keen towards consumption of alcohol and smoking as compared to any other ethnical minority groups in U.S. However, they have been also considered as being highly physically active and biological capability of adjusting with hypertension (Brown et al., 2019). They also have reported having higher levels of diabetes and asthma attacks along with arthritis problems. Their rate of health is poor on the average due to their obesity as per studies.

Compare and contrast the health status of the Pacific Islanders to the national average. Describe the ethnic minority group selected.
The Pacific Islanders in the U.S consist of about 0.5 per cent of the total population and including the ones with partially Pacific Islander ancestry they make up about 1.4 millions of people in the United States.

Figure 1: Pacific Islanders and their average rate of birth

Figure 4: Infant Mortality rates of the Pacific Islanders in the U.S

Describe the current health status of this group.
As in comparison to the Native Americans, the Pacific Islanders have most likely complained of diabetes more than arthritis. There have been no major cases that had detected for any other risk factor for chronic diseases or access to care and its measures (Scandurra et al., 2017). There has been an adjustment for the tendencies of smoking however the males Pacific Islanders are prone to the intake of more heavy liquor than the females.

How do race and ethnicity influence health for this group?
There is a massive health disparity as reported between the non-elderly Pacific Islanders and the natives which are seen by the utilisation of care that is lower. There are also data gaps that limit the amount of clear data that tracks the health progress for the pacific Islanders and the Native Hawaiians (Rosenkrantz et al., 2017). The non-elderly people belonging to this ethnic minority have an income that is below the level of poverty as compared to the non-elderly native Americans that affects health.

What are the health disparities that exist for this group?
The non-natives such as the Pacific Islanders have a hard time accessing care and, therefore, have reported it slower utilisation. They have often delayed or forgone the need for care since they are scared of costs being accrued along with other problems (Files.kff.org, 2021). The non-natives are also less than likely to be reporting the kind of or source of care that they have been receiving. They also rely a lot on clinics than on the doctor’s offices.

What are the nutritional challenges for this group?
There have been reported poor patterns of nutrition by the U.S people that is about 1 serving of fruit per day that is much below the required level of 5 servings which are recommended per day for the Pacific Islanders. There are also potentially other problems with nutrition arising due to the access to fast food and convenience stores catering to them (Wadolowska et al., 2018). They have a typical pattern of eating high fat-containing food than traditional vegetables and fruits that weaken the basic health of people.

Discuss the barriers to health for this group resulting from culture, socioeconomics, education, and socio-political factors.
The cultural factors include the higher tendencies of reliance on junk food and the socioeconomic barriers result from their inability to pay for proper doctor’s services and they end up relying on clinics more than anything else for treatment. It is also the lack of minimum education that lets people shirk from taking nutrition-dense food such as typical fruits and vegetables replacing them with processed foods(Roberts & Mattoo, 2018). The historical trauma of colonisation has also silenced their pleas of the non-natives such as Pacific Islanders for help.

What health promotion activities are often practised by this group?
There had been organised a Diabetes Prevention Program- Lifestyle Intervention which was effective in the reduction of the risk of a person for being diabetic by the addressing of their excess body weight. Since the Pacific Islanders have many cultural disparities with the Europeans and the Asians it is made sure that it is properly addressed for the development of a culturally responsive intervention of health. 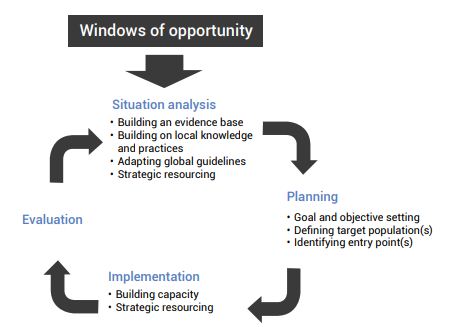 Figure 5: Simplification of the process of health promotion and planning and the cycle of evaluation

There have much health-based promotion practices in Tokelau where there is evidence-based treatment and promotion of health made in regards to the chronic diseases in the area. To summarise soft fizzy drinks were identified by the Ministry of Health as the contributing factor to chronic disease and its factors of risk. According to VA Pacific Islands Health Care System (VA-PIHCS), the primary approach for health care promotion includes activities included with regards to the prevention of disease such as enhancing awareness, health-education and others. The secondary approach is to detect the drink as a contributing factor to diseases as early as possible so that further impact of the drink can be avoided (). On the other hand, activities performed through following the Tertiary approach to health promotion are to ban the drink and restoring the health of the affected people already consumed the drinkand converting the state into a healthier one.

Provide an explanation of why it might be the most effective choice.
The most effective explanation for the banning of carbonated fizzy drinks was due to this health-based promotion in the year 2011. It did a world of good to the populations of Non-Hispanic Pacific Islanders (NHPIs) located in Atafu and Nukunonu atolls (Cdc.gov, 2021). This health-based dr4ive made sure to ban fizzy drinks that were imported nationally in 2013. This policy involved the local community leaders which were also part of why the approach is being termed as more holistic than top-down. It might be the most effective choice as it would not raise any further issue in terms of health deterioration and being affected by disease.

What cultural beliefs or practices must be considered when creating a care plan?
The health-based program will have to take a family-based approach so that the NHPIs are able to be completing their treatment. It is also increasingly more important for the circulation and utilisation of photos and designs that are sure to pull in the masses of NHPIs so that they are able to be presenting the evidence of the relevance of problems to their culture (Cdc.gov, 2021). Phrases and words are to be incorporated that corroborates with the language, context and cultural values of the group.

What cultural theory or model would be best to support culturally competent health promotion for this population?
The theory of Leininger’s Culture Care can be incorporated so that the element of caring is practised during Nursing practices for the NHPIs. The nursing care will at least be culturally congruent so that they are supportive, assistive, enabling or facilitative and the decisions are mostly custom-made so that it fits with the groups’, individual’s or institutes’ cultural beliefs, values along with life ways (Atan, 2019). The intention of such care being practised is so that it fits with or has beneficial meaning along with health outcomes for the people with a similar or different cultural backdrop.

Why?
This style of the theory of treatment is to be followed so that the client and the nurse can be creatively designing a new or different lifestyle care for the well-being and health of the patient who is an NHPI. This mode is also preferred since it enables the utilisation of both generic and professional knowledge which are able to be fitting into diverse ideas into the actions of nursing care for patients.

Conclusion
It is definitely up to the providers to feel any sort of interest in the ways in which the cultures are designed for the NHPIs. Asking the NHPIs about their island of origin establishes a bond that can help in the forging of a positive connection between the clinical practitioner and the patient who is not a Native American. The establishment of the trust is able to be facilitating research and clinical interactions which is the utmost required in this case since the population of NHPIs are battered by cultural trauma from being colonised.

Atan, A. B. (2019). Shared decision-making in the management of Type 2 Diabetes Mellitus in Malaysia: an exploration of the perspective of patients and health care professionals.