Introduction:
The assignment is advanced accounting based. The assignment aims to analyze JB HI FI Annual Report as well as the annual reports of Harvey Norman Holdings Limited. This analysis will facilitate the ascertaining of how much (Australian Accounting Standards Board) AASB standards have been adhered to by these companies, as well as comparing the annual reports of the two companies. The key findings will help shape the conclusion as well as prescribe ways to improve the quality of the two companies’ annual reports.

The Analysis
Since its inception in 1974, JB Hi Fi has expanded rapidly and become a highly profitable and popular Retail Chain in Australia. It boasts over 210 outlets spread across the massive country. The primary focus of JB Hi Fi is into electronic products as well as CDs and DVDs. As per the 2015 JB HI FI Annual Report, the profits accrued by the company were over 135 million Australian Dollars, while the total revenue generated by the company was nearly 3.5 Billion Australian Dollars (Jbhifi.com.au 2016).

Now if we look at Harvey Norman Holdings, it happens to be another retail giant operating in Australia since 1982. Harvey Norman has 280 outlets all across the world, with 194 only in Australia. The company also boasts a roster of 10,000 employees on its payroll. Looking at the Annual reports of Harvey Norman for 2015, the total revenue generated was little over 1 Billion Australian Dollars, with a hike of 25.6% in its profits from the previous year (Harveynormanholdings.com.au 2016).

Upon careful analysis of the JB HI FI Annual Report as well as the Harvey Norman Annual reports, it can be safely concluded that both the companies have adhered to the AASB standards. Furthermore, the report of the Auditor which is to be included in the JB HI FI Annual Report, established that for the year 2015, the financial reports prepared by the company were conforming to the standards set forth in the Corporation Act 2001 as well as AASB (Jbhifi.com.au 2016).

It was also mentioned in JB HI FI Annual Report that financial statement’s presentation was in compliance with the AASB 101 accounting standard, which requires for the financial statements to be presented in accordance with IFRS (International Financial Reporting Standards) (Jbhifi.com.au 2016).

However, it is necessary to ascertain, if the claims of the two organizations regarding their compliance with the AASB standards is true or not. And for the accomplishment of this objective, it is imperative to have a basic understanding of the requirements of AASB standards. These requirements include the following:

It has been analyzed that not only JB HI FI Annual Report but also the financial reports of Harvey Norman Annual reports are in compliance with the aforementioned standards. 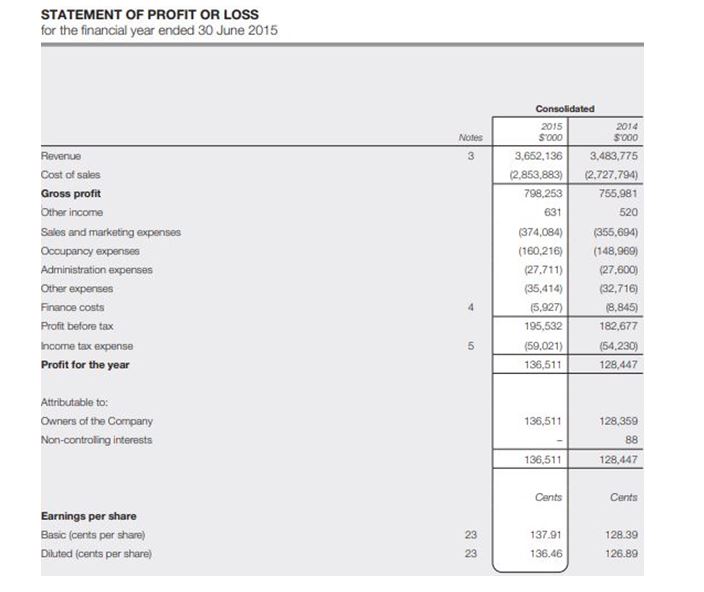 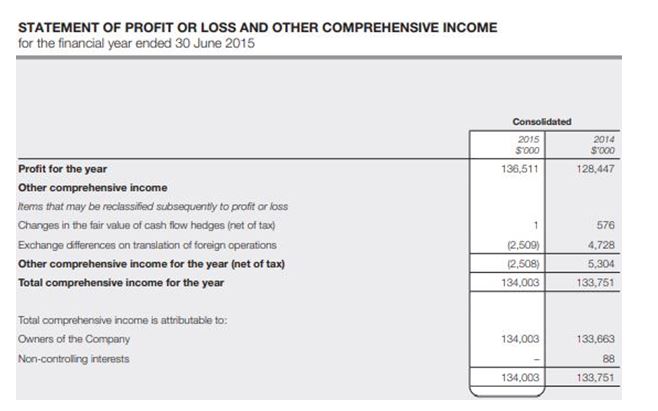 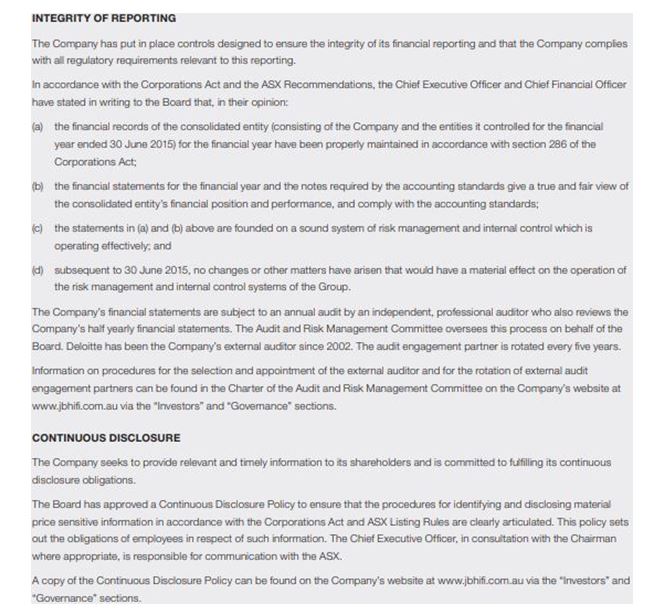 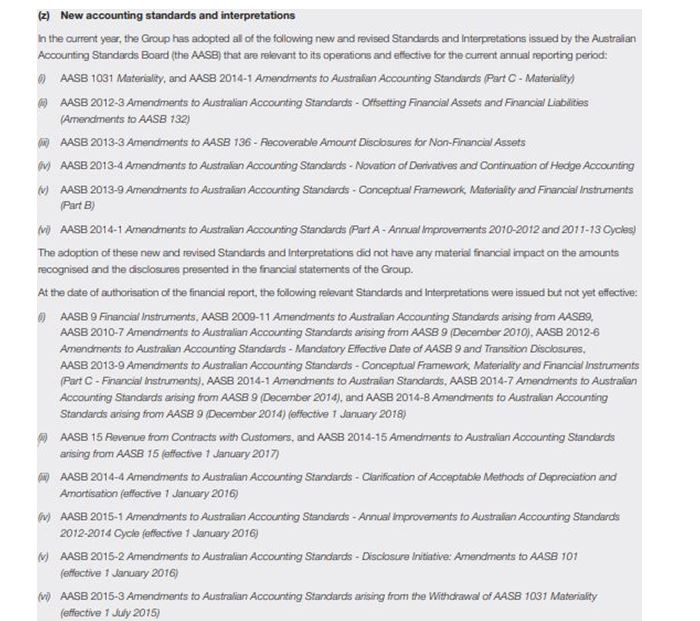 Upon analyzing of the extracts, it fairly evident that JB HI FI Annual Report does comprise of the consolidated financial reports. It can also be seen that a fair and reasonable view of the financial position of JB HI-FI has been represented in these financial reports. The final extract above also clearly states that the JB HI-FI follows the standards laid out in AASB. 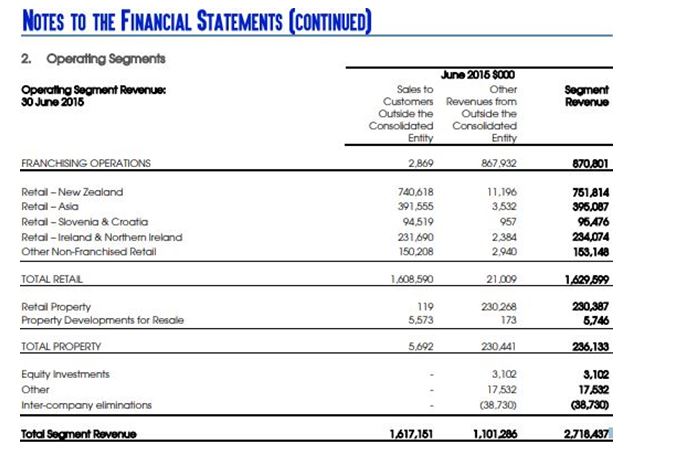 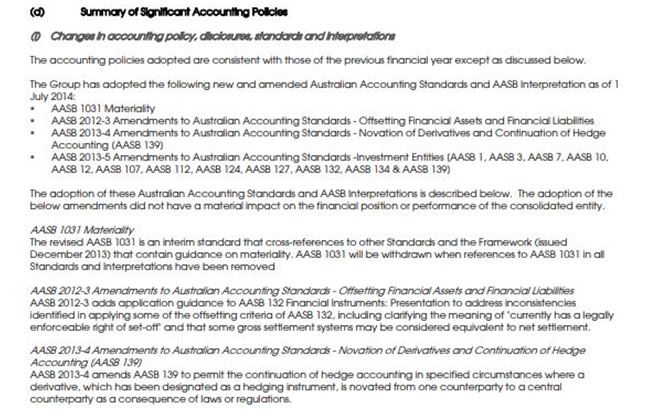 A careful analysis of Harvey Norman Holdings Limited annual report clearly depicts that the AASB standards have been followed in terms of preparation of Consolidated Financial Reports. Another point worth noting is that the Historical Cost method has been utilized for preparation of financial reports. However in order to valuate items such as immovable assets, properties, shares and financial instruments, Fair Value Method has been utilized.

This is a clear indication that the AASB standards have not been implemented extensively with regards to the measurement of the financial value of assets. Additionally, though the annual reports of the company claim that the Corporate Governance is sound, however there are no evidences to support this claim. Similarly, the director’s report also states that Good Corporate Governance Principles have been followed however; an account of the principles that have been followed is not available in the Annual Report.

On the contrary, the JB HI FI Annual Report also fails to clarify about its Corporate Governance Policy. Which corporate Governance Policies have been followed and how they have gone about these policies is another piece of information which is missing. Additionally, the company has failed to follow the AASB 137 properly. On the contrary, when it comes to Harvey Normal Holdings Limited, their annual report does follow AASB 137 properly.

An area where both companies have failed in terms of their annual report happens to be the inclusion of information regarding Corporate Social Responsibility (CSR), even though it is imperative for companies to have a detailed description of their CSR, in the annual reports (Council 2015). AASB is required to follow the standards set forth in the IFRS and the IFRS has made it mandatory to disclose information regarding CSR (Kent, P. and Zunker 2015).

Another major concern is that the companies have only prepared the Consolidated Financial Reports for two years – First, for the year 2015 for which this analysis has been prepared and Second, for the previous year of 2014. This again clearly indicates that the companies have not been completely compliant with the AASB guidelines, considering that as per AASB standards, it is imperative for companies to produce consolidated financial statements for the current as well as the previous few years, to ensure comparability (Dakis 2016).

AASB standards Mismatch Reasons
The first and foremost reason that could have caused for the annual reports to be erroneous is due to negligence of the authority inside the company responsible for ensuring the accuracy of the annual reports. It can be assumed that the accountants preparing the annual reports may or may not be aware of the AASB standards however the concerned authority must ensure that the AASB requirements are met. This can also be confirmed by the arguments presented in Rudzani and Manda (2016) where it is was laid down that the accountants are not solely responsible for annual report preparation. It is required of the people sitting higher up in the hierarchal structure to ensure that the Annual reports are carefully analyzed before their publication.

The second reason that may cause inaccuracy of the annual report is a deliberate intention to present misleading information. Upon analyzing Lockwood (2015), we find that some times, companies deliberately present erroneous information with the intention of enjoying certain benefits that would otherwise be not possible. A clear example of such a scenario is the JB HI FI Annual Report, where JB HI-FI has failed to mention contingent liabilities, which AASB 137 is pertaining to (Zhou, Birt and Rankin 2015). This prevents a company from decreasing the profit share, on account of contribution towards its CSR policy.

Another major concern plaguing the JB HI FI Annual Report is pertaining to it not having a comparative analysis between the current and previous years’ financial performance. This leads to the assertion that perhaps the company is deliberately trying to understate certain figures, in order to allow the company to make certain unethical financial gains.

The Corporate Governance related information in the annual reports can also be manipulated in order to mislead stakeholders (external) (Dakis, 2016). Consequently, the loophole that is manipulated is the fact that in the annual report, the only information regarding Corporate Governance is that Company has followed corporate governance policies and frameworks. However, the extent and nature of corporate governance policies being implemented are unclear and thus may be taken advantage of.

After carefully studying the annual reports pertaining to the companies; JB HI FI as well as the company; Harvey Norman Holdings, it is safe to conclude that the standards and formats which both companies follow are quite similar. Though both the organizations claim to have followed the AASB standards, it must be noted that not all standards have been followed, owing to either negligence or malicious intentions. Both organizations have their annual reports prepared in compliance with AASB 1031 Materiality, AASB 2013-4, AASB 2012-3. But there also are a few significant points of difference that separate the compliances of both of these organizations.

Similarities can however be drawn between the two annual reports on the basis of their measurement of the financial transactions which they have done on the basis of Historical Cost Method. As far as the valuation of Fixed Assets, Financial Instruments of Derivative Nature and listed shares are concerned, fair value method has been utilized for their valuation.

Recommendations
It is suggested that the two companies ensure compliance with the AASB and IFRS standards extensively. One of the key issues that were spotted in both the Organization’s annual reports was that the consolidated financial statements were not available for a minimum of 3 years. The companies must ensure that they prepare these required statements regularly so that comparative analysis can be done. Another area of concern that the companies must take care of is a clear mention and explanation of their CSR as well as their contingent liabilities.

Bond, D., Govendir, B. and Wells, P., 2016. An evaluation of asset impairments by Australian firms and whether they were impacted by AASB 136.Accounting & Finance.

Rudzani, S. and Manda, D.C., 2016.An assessment of the challenges of adopting and implementing IFRS for SMEs in South Africa.