Question: Your group is an investment adviser, working to build a foundation of wealth for your clients. One of your wealthiest clients already has a diversified portfolio, which includes managed funds, property; cash/fixed interest and a few direct share investments in Australia and around the world.

The assignment is a written comprehensive report and analysis of the firms’ financial performance (including referencing).

Your group is required to do the following tasks:

1. Prepare a brief description of the company, outlining the core activities, the market(s) in which it operates within and any factors in the companies’ history which you consider help present a “picture” of your company.

2. Specify ownership-governance structure of the company:

3. Calculate the following Fundamental Ratios for your selected company for the past 2 years. Annual reports are accessible via company websites:

4. Using the information from the ASX website: www.asx.com.au you must complete the following tasks:

5. Research via the internet or financial/business publications:
From research via the internet (using credible sources) or financial/business publications, note any significant announcements which may have influenced the share price of your company. These factors could include merger activities, divestitures, changes in management’s earnings forecasts, changes in analysts’ forecasts, unusual write-offs or abnormal items, macroeconomic factors, industry wide factors, significant management changes, changes in the focus of the company, impact of competitors or law suits etc. (Restrict the number of announcements to 5).

6. Go online to http://www.reuters.com/finance/stocks/ and type in the code for your company into the Search Stocks field and click on the magnifying glass button.

8. Consider the debt ratio for your company over the past two years:

10. Based on your analysis above, write a letter of recommendation to your client, providing an explanation as why you would like to include this company in his/her investment portfolio. Please refer to the ratio results calculated earlier and any other trends or factors that you believe to be important.

Executive summary
Financial performance of a company can be ascertained with the help of ratios. Ratio analysis helps to shed light on the financial performance. In this report, Rio Tinto that deals in metal mining and one of the major rival of BHP Billiton is selected for the purpose of the study. The report initiates with an introduction followed by the corporate governance structure. Further, the performance ratios are computed to analyze the performance of the company. The report spreads to various parts such as computation of beta, WACC and debt ratio. Moreover, the dividend policy is reviewed to nature of dividend payment by the company. Summing up all the factor and the performance, the recommendation and conclusion are drafted.

1. Introduction: One of the largest and well-known metal mining industries in the world is Rio Tinto which is an Austrian-British international. It was established in the year 1962 and has the main objective to provide its stakeholders the best returns by having a good portfolio. It is made up of five different groups of products namely – aluminium, diamond, iron ore, minerals, and copper. The firm has made a great effect to expand across forty different countries and thus also have a huge workforce of over 60000 employees. At first, Rio Tinto entered the market as a single entity firm but with the time it changed its thoughts and changed to dual listed company thus serving both the entities at the same time (Rio Tinto, 2016). The company is conducting its business in six different continents, but it still focuses its operations mainly in Canada and Australia. Its business is mostly carried out by partly or wholly owned subsidiaries. And also the company is having huge fame because it is listed on both the London Stock Exchange and Australian Stock Exchange.

2. Ownership-governance structure
Substantial stakeholders: The company Rio Tinto have built a complete framework where it has employees people for different tasks like remuneration, audit, substantiality issues and nomination. Because of the huge ownership structure and the institutional procedures of the company, it regulates most of the stock market thus causing bull or bearish markets for its big-investors to deal with the perceived values. The company holds more than the 20% holdings of the shares of the HSBC custody nominees Limited (Rio Tinto, 2016). Thus after analyzing all the information, it can be concluded that Rio cannot be considered a family company. Other holders with the holding percentage more than 5% are Nominees Pty Ltd (5.70%), National Nominees Ltd (5.17%), JP Morgan Nominees Australia Ltd (16.94%) and Blackrock Holding (6.28%).

Governance: The top management structure of the company for completion and assessment of the works consists of the chairman, CFO, chief executive and many other non-executive directors namely Robert Brown, David Constable, Megan Clark, Ann Godbehere, Anne Lauvergeon, Paul Tellier, Sam Laidlaw, Michael L’Estrange, Simon Thompson, and John Varley. Further, an executive board comprised of Bold Baatar, Vera Kirikova, Chris Salisbury, Stephen McIntosh, Alfredo Barrios, Joanne Farrell, Simone Niven, and Arnaud Soirat. A relationship between the two employees Bold and JP Morgan was found which existed for about eleven years. This indicates that there was involvement of the managerial aspects of the firm (Rio Tinto, 2016).

The company is also entitled to operate with utmost integrity and be responsible for the actions we take. The standards help guide our behavior with other principles which include integrity, the privacy of data, due diligence, conflict of interest, etc. These are too assisted by the training of the workforce. While in the review conducted in the year 2016, safety and excellence were added to the company’s missions and objectives with the help and consultation of the employees. The company maintained distance with the ugly practices of bribery and corruption (Rio Tinto, 2016). It had a very good relationship with their stakeholders and had transparent dealing with them. The honesty and the agreement of the firm’s programme are direly related to the approach of the business integrated standard which is completely risk-based. The company also looks after the well-managed system of training materials and the delivery as they are one of the most important parts for engaging the employees and beholding them from risks. The human rights which are given the most importance by the company are – security, employee rights, land access and resettlement, the environment including the use of water, labor rights and many such more rights relating to the health services to the employees (Rio Tinto, 2016). Also, the company had engaged with its investors, civil society and community members in the year 2016 to discuss the dealings related to the land access, cultural heritage, labor rights and environment. 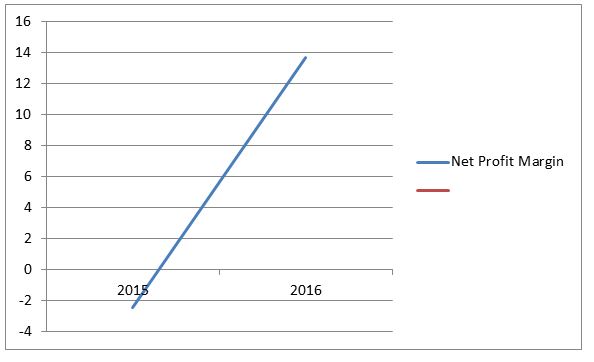 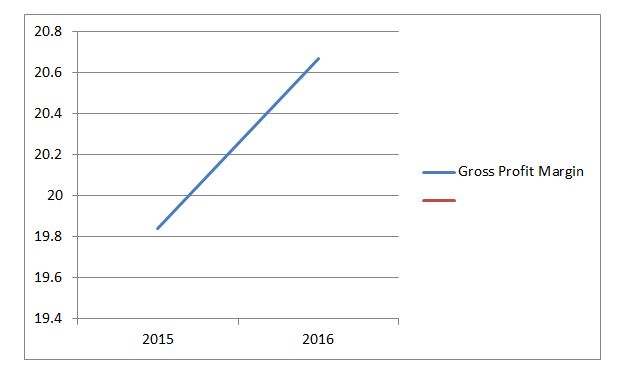 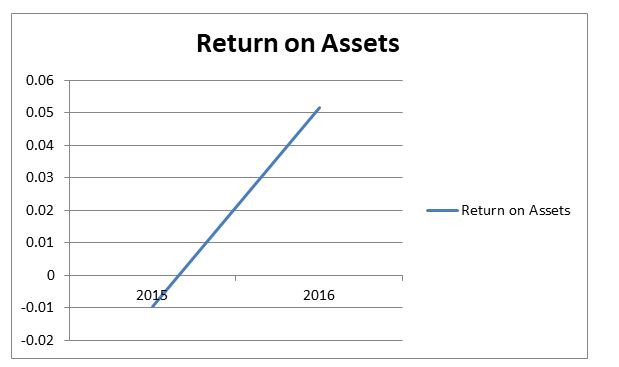 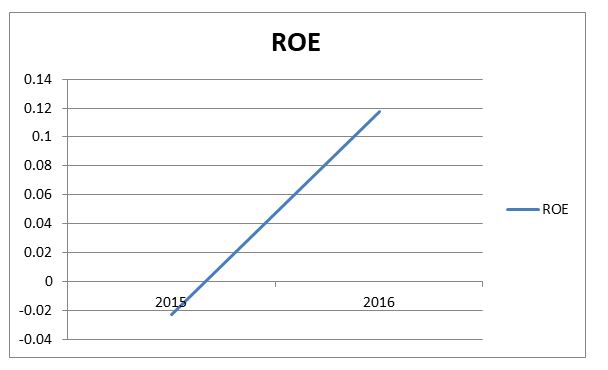 Profitability ratios are used to assess the manner in which the business generate earnings in contrast to the expenses and other costs that are incurred in the normal operations of the business. It needs to be noted that a higher profitability ratio in contrast to competitor is beneficial. Moreover, the same ratio is compared with the ratio of previous year period. Hence, a higher ratio indicates a positive environment for the company (Fields, 2011). The profitability ratio computed for Rio Tinto is gross profit margin, Net profit margin, return on assets and return on equity.

The gross profit margin is used to highlight the well being of the business and it helps in ascertaining how efficient is the organization when it comes to the utilization of labor and materials in the process of production (Subramanyam & Wild, 2014). The gross profit margin has enhanced for the company indicating an efficient use of the process of production. The ratio was 19.87% in the year 2015 but climbed to 20.67% in 2016. The net profit margin is known as the profitability ration and is used to project how efficiently, the company has used or managed the expenses. The board of the company or the management calculate the ratio to understand how efficiently the organization is performing in converting the profits (Gibson, 2010). The return on assets and return on equity changed to positive meaning that the company has used the assets in a positive manner. The higher the profitability ratio, the better for the company. 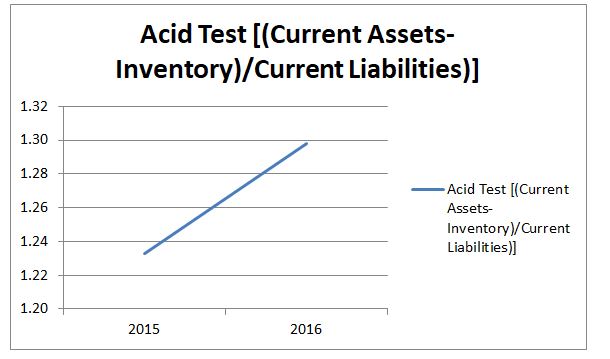 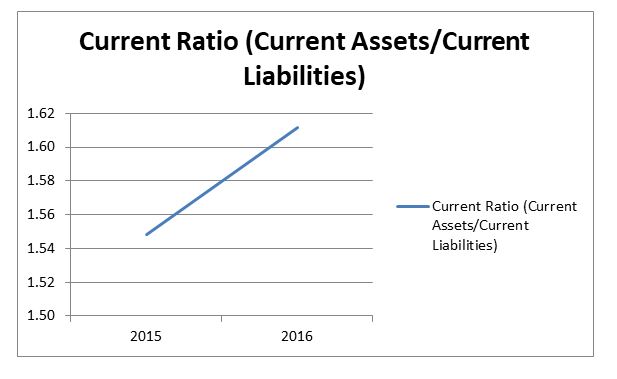 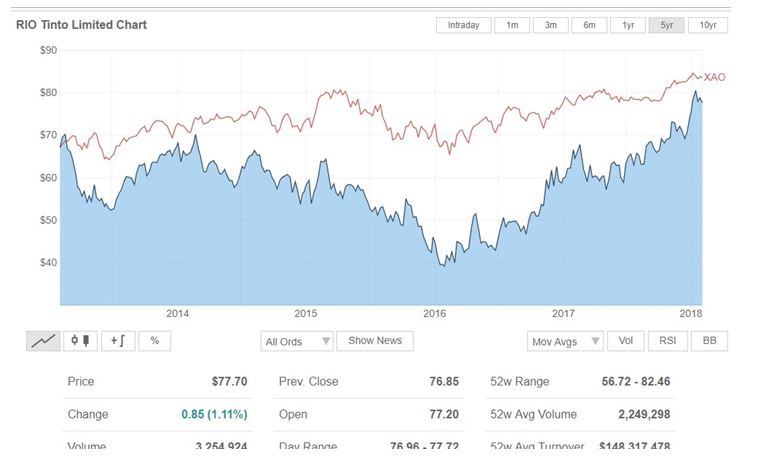 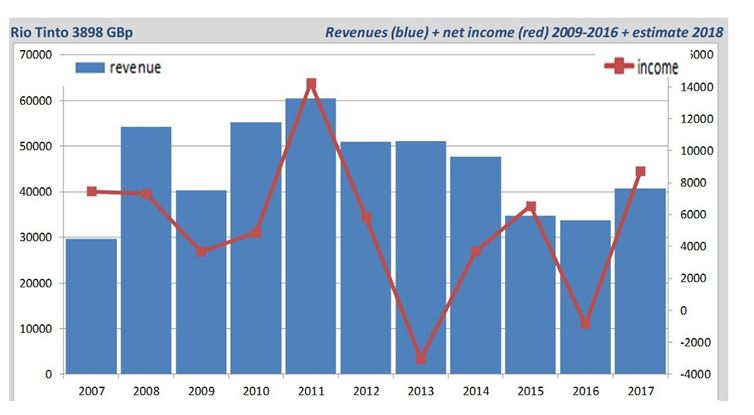 Buy back of Mine - The announcement made by Rio Tinto regarding the mine-influenced the share price. Hence, the action created an upward movement in the prices of the stock.

Prices of Iron Ore: Stabilization in the prices of iron ore was visualized in the year 2016 after a long gap of two years. The decline remained intact till 2015 and aftermath the prices began to rise in a formidable manner (Rio Tinto, 2016).

Stabilization in the prices of iron ore was visualized in the year 2016 after a long gap of two years. The decline remained intact till 2015 and aftermath the prices began to rise in a formidable manner (Rio Tinto, 2016).

Lowering of average production costs - The lessening of the cost of production led to another movement in the prices of the stock. It enabled the company to carry on the profitable activities and took the business to a great height. The noteworthy factor was that of Pibara iron (Rio Tinto, 2016).

The outlook for copper prices - The iron ore price recovery was a major boost to the mechanism of recovery. The news concerning the revamp of $1 trillion of the U.S infrastructure led to increment in the copper prices (Rio Tinto, 2016).

9. Dividend policy of Rio Tinto: The dividend payout of the company will be ascertained only after knowing the actual financial outcome of the company, the board’s decision whether it wants to retain profits for growth and expansion and also whether the company intends to make an effective balance sheet. The purpose of the formulation of dividend policy in a company is the balance between the final and interim dividend which helps to weight the final dividend (Trefis, 2016). The process is carried out by the board in such a manner that there is a balance maintained between the investment made by the company and cash return to the shareholders because, in the end, the company is responsible for maximizing the wealth of shareholders (Ferris et. al 2010). A company has to undergo certain examinations because of the cyclical nature of the industry, because of uncertain cash generation and fluctuating earnings, the dividend policy helps in assisting the company in regards to the ordinary dividend or the extra dividend that can be given to shareholders (Albrecht et. al, 2011).

10. Recommendation and Conclusion: As per the per the report and the discussion, it can be commented that the performance of Rio Tinto in 2016 was optimal because of a variety of positive impact in its favor. The company has a proper debt structure together with the equity and hence, the company been able to match the expectations. The governance and risk management of the company is structured in an effective manner leading to a positive result. The external factors influenced the share prices of the company, however; in 2016 the company saw an upsurge. Hence, it needs to be understood that the iron ore prices and conditions are an important factor in the performance of the company. Therefore, the management must handle this department with precision and ensure that the iron prices do not lead to immense volatility in the share prices. In addition, the ratio analysis of the company completed projects that the company has been able to utilize the resources and boats of immense liquidity. The liquidity of the company is strong and hence, the company will be able to meet the obligations even if it faces a crunch in the present situation.