Task: Fast Lane Ltd manufactures motorbikes and is located in Brisbane. More than 70% of the cost of the company’s motoibikes consist of material and components, which are purchased from Australian suppliers.

About three years ago, Fast Lane introduced a comprehensive supplier evaluation system to monitor the performance of its suppliers. Each supplier was given a 3 year contract that guaranteed large orders as long as it performed according to Fast Lan’s strict requirements. Each supplier’s performance was measured by considering its adherence to delivery schedules (Fast Lane works on a JIT system), accuracy of orders delivered, number of components rejected on delivery, and it’s achievements in reducing its production costs (and, therefore, its material and component prices) over the contract period.

Performance in all these areas will determine whether Fast Lane renews the supplier’s contract or offers the contract to another supplier. The suppliers are aware that there are many alternative component suppliers who would be eager to enter into a long-term with Fast Lane.

After holding discussions with their purchasing manager, as part of the review process, the financial controller has conducted a study to determine the full cost of dealing with suppliers. While the company uses a series of non-financial performance measures to measure most aspects of supplier performance, the financial controller believes that the calculation of the total cost of ownership will provide an additional perspective to viewing supplier performance. For the most recent year, the following supplier related activities and costs have been identified:

The analysis revealed that last year the following activities related to the two suppliers column:

1. Introduction
This report is being prepared on the basis of Fast Lane case study to evaluate the different aspects of the supplier management of Fast Lane and also to evaluate the performance of their two suppliers, named Hot Exhausts and Chrome Manufactures. For evaluation of the two supplier’s performance, the total cost of ownership, the total cost per unit of the inventory that the business has got from these two suppliers will be calculated. Then to evaluate and compare the performance of the two suppliers, supplier performance index will be calculated and other aspects will also analyses. Then the different ways by which the purchase manager and financial controller can minimize the supplier-related cost will be identified. Then different criteria and performance measures by which it will be decided whether the supplier contract will be renewed or not will be discussed. After which, the advantages of using the electronic system to transact with the supplier will be discussed from both the perspectives of the suppliers and Fast Lane. In the end, a summary of all the main points of the Fast Lane case study covered within this report will be given in the conclusion part. 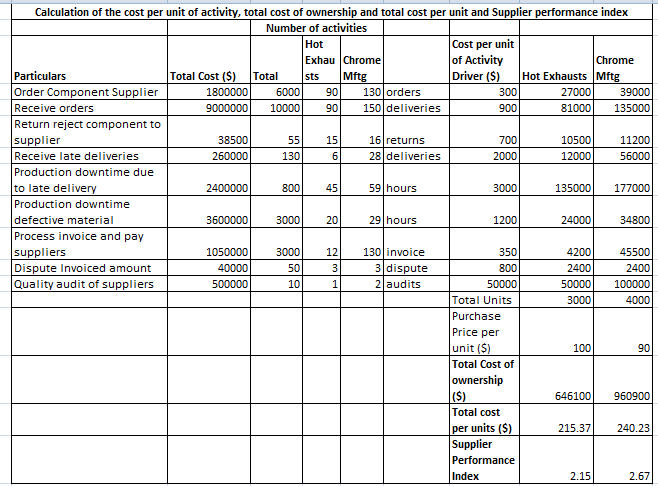 The second measure based on the Fast Lane case study analysis is the total cost per unit which assessed the total cost taking into account all type of cost incurred by the business from procurement until that until of inventory is used by the business for each unit of inventory procured from the supplier (Saccani, Perona and Bacchetti, 2017.). The total cost per unit of goods procured from Hot Exhausts and Chrome Manufacturers is $215.37 and $240.23 respectively. Therefore, as it can be seen in the context of Fast Lane case study that Fast Lane is incurring less amount of cost to procure and maintain the goods from Hot Exhausts among the two suppliers. Therefore, the performance of Hot Exhausts is found to better among the two from this performance measure assessment.

Also, the readings utilized from the Fast Lane case study signifies that after the individually the total cost under each cost driver activities is assessed of the two suppliers, it has been found out that the cost incurred by Hot Exhausts is significantly lower than Chrome Manufacturers and this is another indication that the performance of the Hot Exhausts is better than Chrome Manufacturers as supplier of Fast Lane. 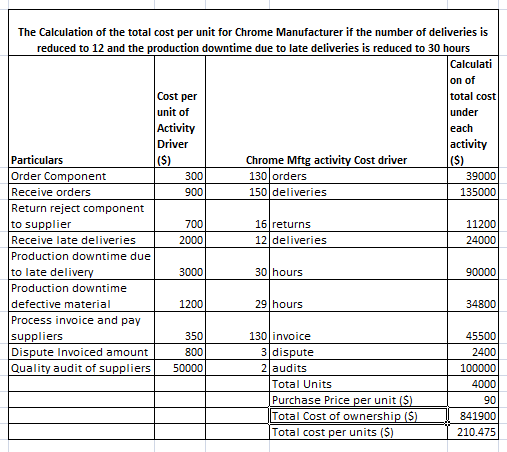 All these are the steps discussed in the above section based on the basis of Fast Lane case study that have been identified that purchase manager of Fast Lane can take to minimize the supplier-related cost of the company.

7. The advantages of implementing the electronic system for transacting with the suppliers from both Fast Lane and Suppliers Perspectives
There are many advantages of implementing the electronic system for transacting with the supplier for both Fast Lane and Supplier Perspectives. First of all, the advantages that Fast Lane will get from implementing the electronic system for transacting with the suppliers will be discussed. According to the scenario explored within the Fast Lane case study, the first benefit for Fast Lane is that it helps the business reduce the cost which the business was incurring due to the placing the order and other supplier-related processes like the payment of invoice to the supplier by using the automated processes as these processes will be automatically fulfilled by the system with the use of the much lesser amount of use of the different resources of the company like human resource or stationary (Soomro et al., 2018). The second benefit is that the chances of the miscommunication between the supplier and business, and inefficiencies regarding supplier management will be reduced as the communication between supplier and business will be much quicker and transparent.

The third benefit is that the time taken to fulfil one process under supplier management will reduce significantly under the electronic system compared to the manual system. The fourth benefit is that reduction in the different errors or mistake which may lead to the supplier mismanagement can be reduced by the use of this electronic system of the business. The fifth benefit is that as the lesser resources of the business is used and completion of the different process become faster, this will lead to an increase in the productivity of Fast Lane (Schoenherr, 2019). These are the advantages which Fast Lane will get from the implementation of the electronic system for transacting with the suppliers.

All these are the criteria and their performance measures which has been identified in this section.

Saccani, N., Perona, M. and Bacchetti, A., 2017. The total cost of ownership of durable consumer goods: A conceptual model and an empirical application. International Journal of Production Economics, 183, pp.1-13.