The students will critically evaluate several project level Environmental Impact Statements to understand the extent to which climate change mitigation and adaptation have been considered during the EIA process. Use projects from other states or countries to find best practices with respect to climate change mitigation and adaptation. Recommend changes that would be needed to the environmental impact assessment system, using examples to illustrate your answer

Environmental issues investigated in South Australia
The Environmental impact assessment essay examines the readings depicted by Clark and Tilman, (2017) that climatic changes have adhered as a major agent for the radical changes in Australia’s environment. Thus, after analyzing the reason behind the adverse effects of climate affecting the Australian environment, EIA system direct and amends their policies so that challenges arise due to changing climates can be mitigated. As opposed by Schaltegger and Burritt, (2017), it is noted in the context of this Environmental impact assessment essay that deforestation is the major issues that lead to saline water draining which leads to down slope and downstream of water quality. As per the report, 7% of the agricultural area of Western Australia is suffering from deforestation. Agricultural overgrazing and clearing are found to another adverse impact of climate in South Australia in which 13% of the original vegetation has been removed after European settlement. Due to overgrazing, huge pressure on biodiversity is created. Intensive agriculture is affected due to the population that is released into Australian oceans and coasts (Panda.org, 2019). It has been evidenced that approx 19,000 tonnes of phosphorus along with 141,000 tonnes of nitrogen are discharged into the Australian rivers.

Impacts of the environment in deriving pressure and forces
Diverse significant environmental factors trends impact the global socio-economic along with environmental drivers and pressure. An ageing and growing population that is urbanized release more waste and carbon than other generation in an average as Australian consume more than other countries. This leads to loss of ecosystem, biodiversity and species. Rapid innovation and technological changes lays a significant effect on consumerism and production system. This leads to creating pressure on the supply of food along with increases the diversity ad volume of waste product. Based on the investigation of Epstein, (2018), it has been evidenced that the concentration of carbon dioxide into the atmosphere has increased by 25% from the year 1960. In addition, global warming adversely affects the climate which leads to degradation and pollution of land, water as well as air. In addition, the adverse impact of the environment leads to create pressure on the supply of freshwater while adhere predicted decline of stream flow.

Impacts of climate changes in South Australia
Several credible sources have been utilized in order to develop the Environmental impact assessment essay. Based on the report of Mota et al., (2015), the concentration of greenhouse gases in the atmosphere is increasing rapidly. It has been evidenced that Australia is encountered to generate 1.33% of carbon dioxide in the world. The global average temperature recorded was 0.7 °C, from the year 1910 to 2010 and as per the current situation, the temperature is assumed to increase more in Australia. In contrast, it has been observed by Sengupta, (2018) Melbourne in Australia are found to be the most sustainable city as compared to South Australia as their authorities are adapting sustainable factors for daily working which leads to eliminating carbon footprint.

What are the medium and long-term implications of the issues identified in the segments of Environmental impact assessment essay within South Australia?
Emission of carbon dioxide in Australia is determined to be major issues that are majorly affecting the environment. It has been evidenced that the reason behind the increasing rate of CO2 in Australia is coal that emits high rate of CO2 as compared to gas and oil. However, climatic changes are primary issues related to increasing CO2 in the atmosphere of South Australia. As depicted by Liu et al., (2015), South Australia can majorly focus on producing natural gas as it would lead to minimize carbon conducted in future. For instance, China has invested huge finance in natural gas after the Fukushima nuclear to manage the balance.

Based on the latest report, it can be determined in the Environmental impact assessment essay that emission from the electricity sectors is into decline in South Australia. As per the sources utilized to produce this Environmental impact assessment essay, annual carbon emission has reached a new peak due to the industries associated in South Australia. An environmental tracking organization released data that evaluated the increasing rate of 558.4m tonnes of CO2 by the end of 2018 (Black, 2018). The report accentuates that Australia is still not up to the level to beat Paris in mitigating emissions of carbon with a target of 28%. 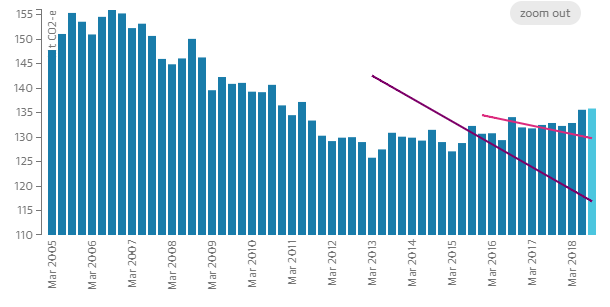 Deforestation affects Australia’s ecosystems as the country lost 40% of its fragmented forest. As per the observation of Johnston et al., (2015), clearing of forests affects the precipitation pattern and local temperature while reducing the rainfall and increasing global warming. As per the report it has been evidenced in the study illustrated in this Environmental impact assessment essay that with an increase of 1.0 degrees, Australia has warmed due to deforestation. It also leads to the loss of trees that are mediated to oxygen while reducing heat-retaining CO2 from the atmosphere. In contrast, agricultural overgrazing caused due to lack in wildlife management, improper usage of land and improper usage of land (Kjellstrom et al., 2016). The segment covered on this Environmental impact assessment essay signifies that this will majorly affect the climate conditions, land degradation and shortage of food for the long term.

Different projects of EIA from other countries in association with climate change adaptation and mitigation
EIA practices in the USA
According to the research carried on Environmental impact assessment essay, the concept of EIA was first developed in the USA, however, afterwards many countries all over the globe have implemented the systems of EIA. In the USA, the system of EIA was developed as the National Environmental Policy Act was enforced in the country in the year 1969. The law stipulated only fundamental components. The legislation process included unique particulars that are generally not included by the other countries in their EIA systems. These components are the mandate regarding the application of specifically upon approval of the project approval. It has also been mandated that federal agencies would be responsible for the preparation of the EIA statements. During the EIA process, Environmental Impact Statements are developed for considering the mitigation of climate change and adaptation in developmental projects (Günther et al., 2017). For instance, for the licensing of a hydroelectric project in the Sweetheart Lake of Washington, a detailed EI statement was developed covering different areas such as the purpose of the project, regulatory and statutory requirements, comments and review of the public, actions for mitigation of the environmental issues and safety, environmental analysis and developmental analysis (Ferc.gov, 2019). The EIA statement, however, did not incorporate major actions for the mitigation of the long term climate change issues.

EIA practices in the UK
For adapting with climate change and the mitigation of the challenges associated with the development projects on the environment in developing countries has created effective EIA systems. The local government of the UK includes regional and administration land utilization programs and control of the development with the help of Town and Country Planning Regulations. In this regulation, the procedures of the EIA systems have been stipulated (Jones and Fischer, 2016). The different development projects like power stations, highways, building construction and other infrastructure projects in the country are approved by the governing body of the country based on the legislations such as the Electricity Act and Highways Act. Individual laws associated with the projects in different sectors stipulate the EIA procedures. For the maintenance of the EIA procedures and the approval system which is utilized by the local government and the national government, individual laws are made. The EIA statements of the developmental projects in the UK contains information that is mandated to be provided based on the Town and Country Planning Regulations 2011. The organizations that propose any project must include information relating to the development description, alternatives that have been considered for making project decisions, environmental aspects description and impact on the environment, measures to reduce the impact on the environment and the difficulties in the process of EIA (Designingbuildings.co.uk., 2019). However, the perspectives and views of the public on the project are not considered in the framework. It means detailed investigation has been carried on for achieving the research objectives used to develop this Environmental impact assessment essay.

Recommendation for future improvement of EIA practices
Most of the developmental projects in South Australia do not incorporate efficiently EIA statements as compared with the EIA statements of the projects in other developed and developing countries (Clarke and Menadue, 2016). Therefore, considering the overall analysis of the research explored in the Environmental impact assessment essay, it can be recommended that in future the EIA practice in the developmental projects could be improved by allowing the project organizers to provide an equal rationale to the EIA statements as compared to the technical details of the project. In addition, the organizations must also be allowed to develop clear responsibilities of the proponents and different governing bodies regarding the EIA for reviewing and conducting the programmed. It has been evidenced that the EIA legislation of South Australia lacks monitoring legislation which is a significant constraint (Veronez and Montaño, 2015). Hence, it can be stated that the findings used to develop this Environmental impact assessment essay also mentions that due to the lack of proper legal provision, voluntary EI monitoring does not function efficiently in the projects in this area. So, it could be recommended that a standard procedure can be set by the EIA legislation to monitor the processes in different developmental projects. The legislation could also imply fines over the projects that fail to carry out proper monitoring of the EIA process. Apart from the mandate of the legislation, the government can also take the initiative to educate the owners of the organizations and developers for the establishment of a greater sense in them regarding the environmental management and the impact of the projections the environment. Public accountability can be increased in the EIA processes in South Australian developmental projects as a lack of accountability can make an effective contribution to environmental monitoring. Enhancement of human resources in the government agencies to deal with the EIA processes and the issues faced in the individual project levels is highly impactful.

Clarke, B. and Menadue, T., 2016. Fit for purpose? Establishing the robustness of EIA screening systems for land-use planning using a case study from South Australia. Journal of Environmental Planning and Management, 59(3), pp.538-556.

da Silva Dias, A.M., Fonseca, A. and Paglia, A.P., 2017. Biodiversity monitoring in the environmental impact assessment of mining projects: a (persistent) waste of time and money?. Perspectives in Ecology and Conservation, 15(3), pp.206-208.