Task: This assessment is an Individual report on Engineering Ethics followed by a reflective activity.

Introduction
Ethics is one of the significant elements of any business activity or operation which is the core focus of the present engineering ethics assignment. It is essential that the ethical compliance is maintained at all times. There are several codes and principles that have been developed for the business firms to ensure that the ethical norms are not violated at any instance. Engineer’s Australia has also published the Code of Ethics that comprise of four major principles to follow to ensure that ethical compliance is maintained. These four principles include demonstration of integrity, practising competently, exercising leadership, and promotion of sustainability (Engineersaustralia, 2019).

The case that has been described in this engineering ethics assignment is the explosion of the American Space Shuttle Challenger that took place in 1986 and resulted in the loss of lives of all the people that were on-board. The issue that led to the explosion was known to NASA; however, it decided to go ahead with the project.

Structure Summary
The engineering ethics assignment includes the details of the ethical violations and contradiction followed by the pressures & motivation behind the decisions. The recommendations and the realistic actions & outcomes are covered next with personal reflection at the end. 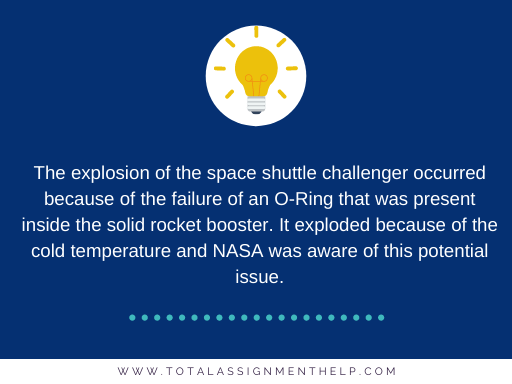 There is EA Code of ethics’ principles that have been violated in the incident explored herein engineering ethics assignment.

The first principle that has been contradicted and violated is the demonstration of the integrity. The principle states that the organizations must display the honest and trustworthy behavior in all the actions that they perform. The study developed in the engineering ethics assignment also states that the dignity of all the people must be protected and preserved. NASA was aware of the potential issues that could result with the cold temperature (Basart & Serra, 2015). NASA chose to go ahead with the project and did not share the information with the rest of the stakeholders and the people on-board. This is a sign of dishonesty and the non-protection of the dignity of the people. Thus, the principle of demonstration of integrity was violated by NASA. It is the responsibility of the organization to make sure that all of its people and the clients remain protected and secure at all times. However, NASA took a decision to put the people on-board at risk and it eventually led to the lives of all of them. The entire scenario shows the ethical violation of the principles by the decisions taken by NASA.

The second principle, that is, practice competently has also been violated in this case of engineering ethics assignment. The principle states that the action of an individual or an organization must be on the basis of the available knowledge. NASA had the knowledge of the issue and the possible problems that could result with the issue. However, it acted otherwise and agreed to go ahead with the project. This is a sign of incompetency (Chung, 2016). NASA could have made better decisions by choosing the alternate path and could have chosen to prioritize the people over the brand value and the reputation. The explosion shows the incorrect and incompetent decisions taken by the company which ultimately led to the loss of lives of the people.

The third principle mentioned in the context of engineering ethics assignment involves the concept of leadership and the responsibilities that a leader must exercise. Some of these include communication with the stakeholders and maintenance of trustworthiness. NASA did not adhere with the principle as the communication regarding the issue was not carried out with the rest of the stakeholders. Also, the information was kept hidden from the stakeholders which are a clear sign of non-compliance.

Pressures & Motivation
There are a few reasons illustrated in the context of engineering ethics assignment that could have motivated NASA to take the decisions to go ahead with the project in spite of the knowledge of the issues.

The first and the foremost could be the slight possibility of project success which would have resulted in immense benefits in the field of space science. The probability of the event could be low which might have motivated the organization to continue with the launch (Schmidt, 2017). In the space shuttle projects like these, there are a lot many resources and a huge cost that gets involved. There are several years that are spent in the research and planning and the execution & implementation is also a time-taking process. NASA must have also invested the resources and the costs in all these processes. The delay in the launch would have meant that the project would be postponed to insignificant time. This might have led to the decision to take the risk and go with the launch.

The other reason noted herein engineering ethics assignment could be the immense funds that are involved in such large-scale projects. The cancellation of the project or the last-minute delays leads to significant monetary losses. In the case of the monetary losses, it is usually the respective project management and the team that is held responsible. The implications on the team members are also significant and not easy to manage. NASA must have taken the decision to continue with the project to avoid such implications.

There is also loss of brand value and market reputation that results with the last-minute cancellations of the project launched. NASA is the top space research organization that is looked upon by several other institutes in the world. There is a great degree of responsibility that comes along with such a reputation. This must have led to immense pressure on the team members to maintain the brand reputation and carry on with the launch.

The probability of the risks, such as that of the explosion is very low and that must have been estimated by NASA. The low probability score must have also been one of the deciding factors and a motivational element to go ahead with the launch.

Recommendations
Some of the realistic actions based on the case scenario of engineering ethics assignment that could have been taken are: 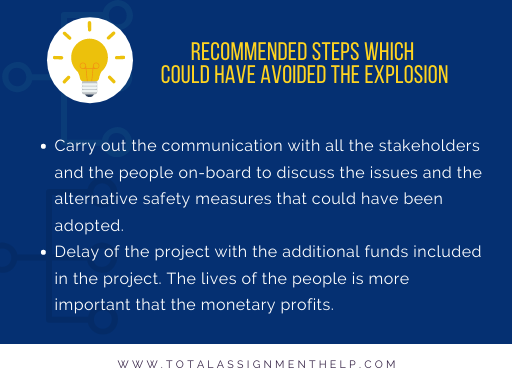 These actions could have resulted in the negative implications on the stakeholders due to the delays. However, the long-term benefits to the stakeholders and community could have been ensured with the success of the project examined in the engineering ethics assignment (Yahaghi & Sorooshian, 2017).

Realistic Actions & Outcomes
I believe that NASA could have avoided the event that took place in the form of the explosion of the space shuttle challenger. NASA was aware of the issue associated with the solid rocket booster and the impact of the cold temperature on the same. NASA could have chosen to adopt an ethical approach to deal with the issue and ensure that the issues of non-compliance did not occur. I believe that some additional steps could have been taken to avoid the explosion. NASA could have carried out the communication with all the stakeholders and the people on-board to discuss the issues and the alternative safety measures that could have been adopted. It could also have delayed the project with the additional funds included in the project. The lives of the people are more important that the monetary profits (Moore, 2015).

I think that the alternative approaches and steps could have led to the emergence of some of the complexities in the initial period. It may have also resulted in the loss of the brand value and reputation. However, the lives of all those that were on-board could have been saved. Therefore, I believe that it is always necessary to follow the ethical approach in the business activities and processes that are conducted in the engineering ethics assignment. If NASA would have chosen to abide by the code of ethics, such as the one published by EA, the possibility of the explosion could have been reduced. There were some changes that would have been required in the plans and to recover from the delays and monetary losses. However, the long-term benefits could have been avoided. The events like these cause damage to the entire society and it takes several years for an organization to re-build its reputation.

NASA could have shared the details about the reasons for the delay in the launch which would have convinced the external stakeholders on the ethical correctness of the step. It would have also led to the preservation of the stakeholder trust that otherwise got violated with the explosion of the challenger.

Conclusion
The case of engineering ethics assignment shows that there were several loopholes that were present in the decision that NASA took. The principles listed in the EA Code of Ethics were violated by NASA. There were several people that lost their lives in the explosion that occurred due to the unethical decision that was taken by the organization. The organization could have followed alternative ethical path which might have resulted in a few short-term losses. However, from the overall discussion on this engineering ethics assignment the loss of lives of people could have been avoided.

Reflection
It is stated herein engineering ethics assignment that ethics plays a very important role in every business and industrial sector. I aspire to be an Engineer and ethics will play a significant role in the professional responsibilities that will be assigned to me. As an Engineer, I will make numerous decisions that will have impacts on the project, stakeholders, and the team members. In the case of unethical decision-making, there may be increased number of risks and issues in the project. With the unethical approach, I will also not be successful in completing my roles and responsibilities as per the expectations.

I also plan to undertake the role of Engineering Manager in the years to come. In such a role, I will also be allotted with the leadership responsibilities wherein the resource and project management will be some of the key activities that I will perform. The human resources in the team will be provided with the incorrect information and they will take incorrect decisions if I will not follow the ethical approach. It will become difficult to achieve the intended goals as well. On the other hand, with the ethical approach in all the roles, I will be able to lead the team properly. I will be able to lead by example and the resources will be motivated to follow the similar path. This will enhance my reputation as a leader and the end-results will also be effective. I will have to make sure that I continually enhance my knowledge on the ethical principles so that the issues of non-compliance never come up. As an Engineer, I may have to take decisions that may have impact on the society and community as well. It will be my responsibility to follow ethical approach so that positive impacts and results are obtained at all the times.