Task:
You are required to prepare an electrical engineering report on Electrical Power System of a specific country. Select one country. The country that you select must start with first letter of your first name (For example if your first name is Marie then you chooses a country name which starts with letter M (for example Malaysia)).

The following are the general guidelines for preparing report.

You are encouraged to obtain and review information from websites of Electricity Authorities, IEEE, IET, International Energy Agency and/or similar Associations for preparing report.

1. Introduction
Japan is one of the most innovative countries in the world. It is also considered one of the countries that have benefited from the revolutions that took place way back. With opportunities like this, Japan has used electric power or electricity on 25th March 1878 at the Institute of Technology in Toranomon, Tokyo. Then, electricity was not just something massive achievement for the Asian countries. It was something huge for the European countries too. In 1886, the first power company named Tokyo Electric Lighting was established and is one of the private entities. It has effectively worked throughout the country with sublime efficiency and made energy or the power system accessible to the countrymen. Within the year 1896, the number of private companies or the number of electric companies that started to operate in the market of Japan has become close to 33. With regular changes coming into the technology, Japan has undergone a rigid change in the electric utility industry. With the clear and composite impact, almost more than 700 companies have stopped working and become key five companies as joint ventures. After the Second World War, more than five electric generation or general electric companies were established with the name of Hokkaido, Tohoku, Tokyo, Chubu, Hokuriku, Kansai Chugoku, Shikoku and Kyushu. All these newly created companies were given charge of supplying electricity to the whole region and became impactful for the countries growth in the electric industry.

2. Electricity generation mix
According to the current financial year, Japan is willing to produce an energy generation mix that consumes specific facts or parts. Among all those parts, the most impactful part is regarding the creation of more than 10% of the total consumed energy through renewable sources like wind water and others. Apart from this, there is a reasonable probability of Japan being willing to produce 22-24% of the whole energy through the help of renewable sources within the year 2030. According to the recent energy mix of Japan, it is using nuclear power to produce nearly 20-22% of its total consumption of 989.30 bn kWh (Taghizadeh-Hesary, et al., 2020). According to the per capita calculation and average, it is vaulted that the consumption of Japan is close to 7499 kWh. Among the whole required energy, it is found that Japan is producing more than 27% through the help of LNG resources. Another impactful energy generation is taking place in Japan through the help of coals, around 26% of the whole energy sources. Even Japan uses crude oil to produce electric energy and fulfils the demand of the country's recipients. 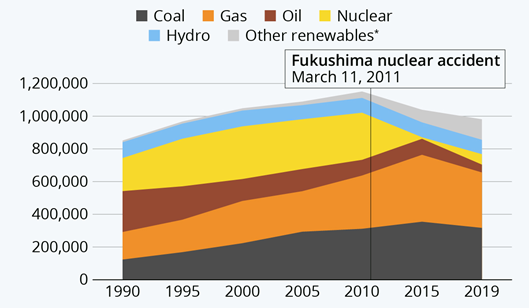 The graph as mentioned above presents the view where it is indicated that Japan is reducing the use of nuclear power for generating electric energy and ensuring that the use of renewable energy is getting enhanced with time. Even the best thing seen is the amount of energy consumption or requirement decreasing throughout the country (Kato, and Kurosawa, 2019). Another noticeable thing that needs to be mentioned through the graph is that the number of hydro products or resources getting used for generating energy in Japan can be considered the most impactful ones for the community and the environment.

According to the current possibilities, the installed capacity of Japan regarding energy is around 81.9GW for renewable sources. But within the year 2030, it is willing to be enhanced up to 165.3GW.

According to the forecast, the maximum energy demand that Japan can reach will be close to 159528 within the year 2022-23. 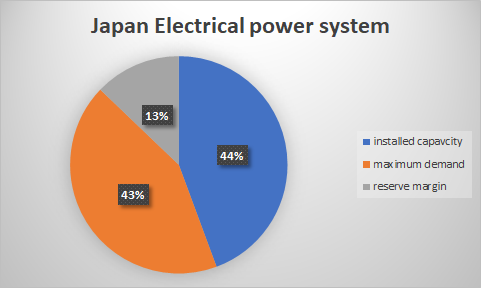 3. Power system network
According to the findings, it is estimated that hydroelectric generation accounted for around 8% of the whole or the net generation mix in Japan in 2019. After compilation, there is a high amount of possibility where Japan has more than 6% power from the other resources. Along with that, Japan used to generate power through the help of oil and crude resources with a more incredible amount. With the efficiency of generating such influential facts or relative evaluation, there will be greater flexibility present regarding Japans energy operations (Sharvini et al., 2018). According to the findings, it is also evaluated that Japan has gone on to have more than 15% consumption which is close to 146 TWh through certain happenings or certain unneedful activities. 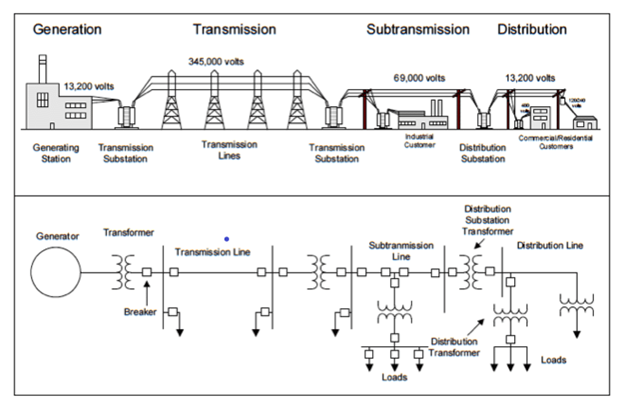 4. Electricity market
As opined by Yun, J. and Kang, (2020), one of the most impactful factors or issues coming into Japan and its electricity is how electricity is being produced in the country. The most commonly used resource for producing electricity or the production of Electricity in Japan is through the help of Petroleum. Apart from using Petroleum, Japan also uses another fossil fuel at its primitive best by using Coal. Japan also using the natural gas resources of the country for producing a tremendous amount of electricity. Apart from all those, the country is giving in a reasonable amount of focus on producing energy through the help of Hydro resources and renewable sources. 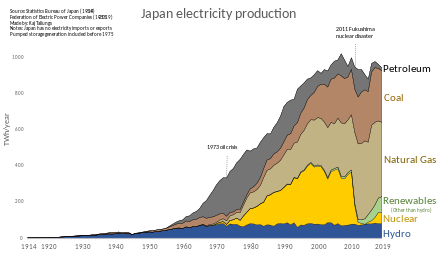 In the business context, the energy industry or the electric industry has been facing many losses in recent times after the shutdown of the Fukushima Daiichi Nuclear nuclear plant in the year 2011. Without nuclear resources producing energy for the companies or the operating business in Japan is getting higher cost. This makes the organisation or the operating companies have a higher budget or higher amount of production cost. The increasing cost makes the organisations or the market competition much authoritarian (Esteban et al., 2018). Even the organisation of the corporation having the availability of resources getting ahead of the subsequent ones and taking the benefit out of the market. Even with this type of impact taking place throughout the country, the users can select their electricity supplier among the operating 250 companies.

According to the findings, Japan is consuming more than 3.34 thousand petajoules of power every financial year. Based on the consumption of electricity Japan has a clear and relatively simple stricture. According to the structure, the electric sector of Japan has the cost of electricity. For using electricity 120 kWh energy, the non-commercial users of Japan need to pay a cost of around 19.88 yen. Using electricity between 120 kWh to 300 kWh, there is a requirement of paying 26.46 yen (Noorollahi et al., 2017). Any consumer or user consuming more than 300 kWh of energy or electricity needs to pay a cost of 30.57 yen.

According to my findings and evolution, Japan has many opportunities to reduce energy uses or has the possibility of using its renewable sources much efficiently, which is missing at this point (Wahyudi, and Novitasari, 2018). To make sure about that, Japan needs to come up with more extraordinary findings and make sure that the households are not wasting any type of energy that is found to be something pervasive for the country’s electricity users.

5. Renewable energy
According to the study, there are multiple ways to use renewable sources by Japan to produce electricity. One of Japan's significant parts of operation is producing electricity through the help of different bioresearches (Ohba, 2019). Here below, a chart will be presented which will ensure about the effectivity and the enhancement which the renewable resource utilization has taken place for Japan in the last few years. This can also be accounted for as a comparison or enhancement of findings through graphical and tabular representation. 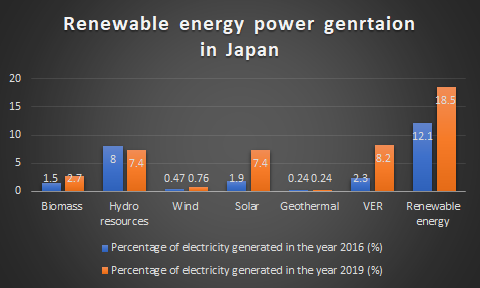 6. Summary of the task and conclusion
According to the finding, the main or the key this g evaluated is the amount of gain the energy sources are taking place or the amount of gain taking place in the electric generation sector of Japan. With the correct use of resources and using the critical forms of operation, Japan is becoming one of the key stakeholders to enhance the use of renewable energy. Having the target of generating more than 22-24% of the whole requirement of power will be a significant finding for Japan. Along with this, by the proper use of preventive measures, the possibility of developing a significant amount of enhancement in the cost of products, there will be a specific rate of change coming into the electric sector of the country. Here the study has demonstrated all the possible changes coming into the industry for a long run and even gone on to demonstrate the critical and considerable factors attached to the Electrical power system of Japan.