Task: Q1) Successive Australian governments have failed to recognize and/or remedy serious market failures that have resulted in the adverse impacts of the COVID epidemic being more severe than would have otherwise have been necessary. Discuss.

Q2) Utilizing economic theory and illustrative examples write an essay which explains why Australia is in a deep recession. In your economics essay, assess the effectiveness of the government response in limiting the depth of the recession and in contributing to recovery from it.

Economics Essay 1 – Market Failure and Covid-19 impact in Australia
Introduction
The Australian economy has always proved to be a miracle economy as it survived the recession during the 2007-2008 economic crisis and also survived the 1997 Asian financial crisis. The Black Summer fires were affecting the economy of Australia, adding to it was the outbreak of coronavirus, which gave a major challenge to the Australian economy, in about one week of the outbreak of the coronavirus, unemployment in Australia led to one million(Karp, 2019). In its reaction, the Australian Government spent its biggest economic package of around A$ 130bn in order to keep its six million people that is around half of the workforce.

While the retail sector was also facing the same problem before the outbreak of the novel coronavirus, despite the tax cut of 2019, the retail sales were 0.7 percent in December and 0.3 percent in January, which states that the retail sales had dropped for two consecutive months(Hutchens, 2020). Now with the onset of the virus, the Australian economy was bound to be hit very hard, where the growth of the economy in 2019 would only reach 2.2 percent compared to having a growth of 2.27 percent. The Australian Government was unable to recognize the performance of the Australian economy which was very weak in the year 2018-2019; the Government was unable to see that the economy of the country slowed to an annual rate of just 1.8% for the year 2019, the slowest growth rate recorded since 2009(MLC, 2019). The Australian Government could not recognize that in the labor market, 360,000 new jobs were created in the year 2019, after falling to 4.9 percent, the unemployment rate in Australia was 5.2 percent in 2019, therefore after the onset of the novel coronavirus unemployment rate would increase at an unprecedented rate. In terms of wages, growth in the private sector remained from 1.9 percent to 2.3 percent in the year 2019; this level is very low in terms of Australian history of wage growth(MLC, 2019).

The Australian Government was unable to recognize the low wages growth and high household debt, the housing prices in Australia also declined during 2019, with the lowering of housing prices and the strengthening of the lending policies of the banks led to weaker apartment constructions(Hutchens, 2020). The apartment construction in Australia fell by 24 percent in the year 2019. Fall in housing prices meant that there would be weaker retail sales as now the consumers would limit their spending(Hutchens, 2020). The Australian Government could not recognize that the value of the Australian dollar was falling; the dollar was down to 2.6 percent against the euro, 5.0 percent against the US dollar, and 7.6 percent against the yen. After the outbreak of the novel coronavirus, the economy of Australia powered out a government of Australia was unable to recognize the condition of the economy before the outbreak(Mercer, 2020). Therefore this resulted in more severe impacts such as higher unemployment, the economy fell to 7 percent, decrease in retail sales, decrease in business investment, and others(Mercer, 2020).

Conclusion
Though the Black Friday Fires had an upsetting effect on the economy of the Australian market, the Government of Australia was unable to recognize patterns of lower economic growth in the country, high level of unemployment, low level of wage growth, lower retail sales, dropping of household incomes, decrease in the value of Australian dollar that existed in the year 2018 to 2019 could not be analyzed by the Australian Government, as the Government failed to bring remedies to such failure of the market or the economy in Australia, while the outbreak of the coronavirus powered out the market and economy of Australia.

Economics Essay 2- Recession in Australia
Introduction
The Australian economy is a well-developed mixed economy with 1.89 trillion AUD in the year 2019. Australia was the largest economy to have a median wealth per adult in 2018 but lost to Switzerland in 2019. The most dominant sector in Australia is the service sector, and its top destination for export is East Asia, with an export rate of 64%. Australia's mining sector was in the boom period from the year 2009 to 2010 but had been declining after that year (Robinson and Wang, 2018). In the macro economy, recession is the phase where there is a considerable downfall in a particular region's economic activity. Recession is measured in terms of GDP and unemployment rate of the nation. If a nation is facing a decline in the GDP over a period of few months and there is a rise in unemployment, then it can be positively said that the nation is in recession. 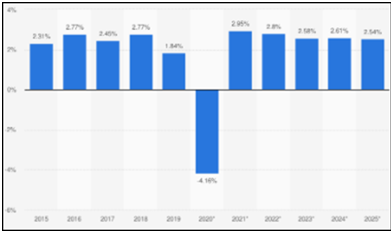 With the increasing adverse, effect of the pandemic, the GDP in the quarter of April-June 2020 declined by 7%, which was the largest fall since 1959. A country is in recession if its GDP continues to fall for two consecutive financial quarters. The only economy to dodge the great recession in the year 2008 was Australia. The financial crisis of the year 2008 affected almost all the big nation but Australia. This happened only because of the demand for their natural resources from China. However, this was not the case in the year 2019-20 because of the apocalyptic bush fire (Calma, 2020) and the COVID-19 pandemic. The year 2020 for Australia started with an extreme bushfire that adversely affected the economy.

There was a drastic fall in the GDP due to the insurance losses, damage to private and public property, disturbances in the economic activities, loss of wages and profit. Australia has lost a significant amount of money because of natural disasters, which results in the fall of GDP. A report presented by Insurance Australia Group and Standard Global Service considerable amount of Australian economy is at the risk of loss due to natural disaster. Along with annual bushfire, there are high chances of a tropical cyclone and extreme floods. This results in the loss of properties, interruption of economic activities and give rise to unemployment. 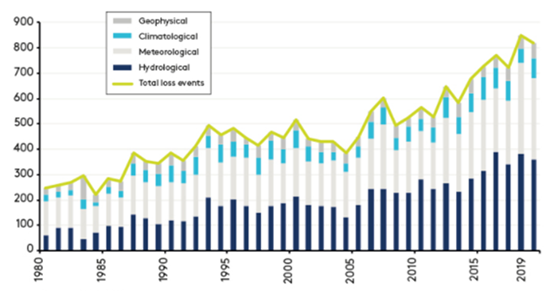 While Australia was coping with the losses caused by the wild bushfire, the COVID-19 pandemic made its way into the nation. This caused a drastic change in the economic system because people had to stay in their homes. The economic growth of Australia has never been worst due to the continuous decline in the GDP. Many large and small businesses were shut down create large spread unemployment across the country. This has negatively affected the demand for Australian products because all the nations are in quarantine. All the countries are closing their border, which has dropped the exports from Australia. The exports and imports are estimated to decrease by approximately 3% and 2% respectively. This is because China, who was their largest importer, can no longer import from them. This will cut down a substantial amount of revenue in the economy. Australia economy is suffering severe difficulties one after another; first, it cannot supply their natural resources to China. Second, tourism suffered due to COVID-19, which has shut down many small businesses that earned seasonal revenue and creating mass unemployment, increased cost of leaving and decreasing demand. All these factors point towards deep recession in the Australian economy, with the closing down of businesses and no jobs, available Australian residents face difficulties in living their lives.

Conclusion
In conclusion, it is evident that Australia is in a deep recession because the unemployment rate is high, and the GDP has been decreasing consecutively. The demand for Australian products is decreasing, and there is no demand from their biggest importer China as well. This has resulted in a drastic drop in the revenue of the nation and lowering the GDP. In the other hand, the wild bush fire has increased the cost in the economy. The loss of infrastructure, human lives and natural recourse has created a heavy cost burden on the economy. To minimise these losses from natural disasters, the government should make investments in disaster management. Investing in disaster management can help them appropriately plan, organise and implement necessary measures to manage or even prevent natural disasters. The government has also been able to reduce the rate to unemployment to some extent by creating new jobs for the people. Therefore, if the government can intervene appropriately, they can recovery from recession successfully.