Introduction
National security interest implies the preservation of the nation's political identity with the major framework and institutions. The main purpose of this economics assignmentis to discuss the national security interest with the trade theory and interest which help to understand the side of economic well-being (Sills, 2018, p. 63). Here these economic and non-economic factors are considered to be evaluated with the trade theory implications to understand the form of protectionism that is a stance to adopt the protection against the domestic and national security from the foreign persistence’s.

Main content findings
Trade theory is a major portion of economics that analyses the patterns of domestic and international trade with the discussion of origins, policy orientation, and welfare implications (Melitz, 2018, p. 10). Trade theory aims to explain the patterns of existing trade within the country's economy and also measure how it impacts the country's welfare and Economic differences. New trade theory is an important area to know the main findings where new trade theory implies a bunch of economic models implemented into international trade focusing on the role of increasing returns to scale and other networking’s. Where classical trade theory is based on the country and also states the wealth of nations. The key elements of classical trade theory are value, pricing structure, supply and demand, and distribution (Dollar and Kidder, 2017, p. 165). Here gains from trade are only based on the comparative cost and advantage. This specialization involves the focus on the product or service pace which is considered to be more efficient and also increases the rate of productivity and advantage to the firm or the overall country's economy. 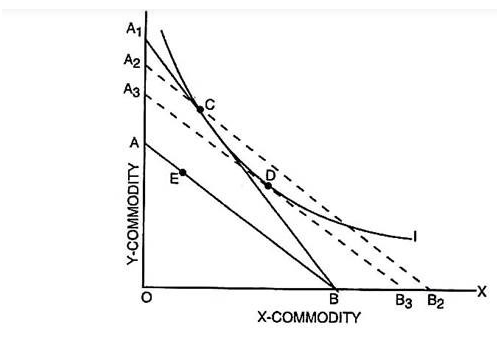 As per the Richard and Malthus approach of trade, the gains from trade can be defined with the specialization in the production based on the principle of comparative cost which results in the saving of cost or resources (Ruffin, 2017, p. 135). Considering the above diagram, the production possibilities curve has been drawn under the constant cost condition at AB before the trade takes place after the production happened at E, and the country entered into trade the exchange ratio shifts to A1B and the production takes place at new position C. Shifting of Production possibility curve can be shown by A2B2 and the gain from trade with the economies of scale and increasing returns to scale with other agglomeration Economic conditions can be shown by BB2/OB.

The distinction between inter-industry and intra-industry trade can be obtained by understanding two of these factors. Inter-industry trade is considered as the trade relationship between the products and services that belong to different countries and regions. Intra-Industry trade shows the trade relationship between the products which belong to the same industry. The exchange of similar products takes place in the same industry. The growth of globalization and offshoring implies the process to boost productivity for the global economy. The growth of globalization shows the growth of interdependence of the World's culture, economy, population, and others regarding which brought into the cross border trade in goods and services with the improvement of technology, information, flows of investment, and others (Bernard et al., 2020). As per the Duterte inaugural speech on 30th June 2016, National security policy interest amplifies the concept of national security of the country, public safety, social justice, law and order with socio-political factors (Tan, 2021, p. 5). National security indulges self-sufficiency and also promotes international peace. As the national security interest prioritizes the capacity for recovery and resistance it also focuses on supply chain resilience.

Following national security and trade relations, in today's increasingly fragmented landscape, the clash of commercial and global security is occurring. As the definition of "national security" widens to include concerns including national industrial policies along with cybersecurity, and countermeasures to changes in climate as well as pandemic disease, governments' perceptions of their essential interests are rapidly changing. Simultaneously, duelling inclinations favouring legalism as well as denormalization are tearing the system for resolving trade disputes apart (Heath, 2019, p.223).The World Trade Organisation (WTO) is transitioning to a form of organised politics instead of adjudicating, prioritising diplomacy as well as power politics above legalism, albeit with a more well-articulated institutional framework than that of the General Agreement on Tariffs and Trade (GATT) era. A second paradigm, which can be found in measures that depend on ad hoc arbitration maintains a focus on legalism and strong restrictions on national security, while prioritising trade governance above flexibility. A third option, as evidenced by the recent Russia—Transit case, seeking to strike a balance around oversight and flexibility, emphasising the role of conflict resolution bodies in enabling adaptation along with mutual learning. Soft power, or a nation's ability to develop and deploy economic power as well as project their national values, is equally important for national security (Nanto, 2022). Human capital growth is critical for economic prosperity. Science, technology, as well as innovation all, have a role. The national security issue has become more complicated as the global political and economic situation is changing. The September 11 terrorist attacks, in particular, added another dimension towards the ambit of national security. As a result, in the framework of international trade, national security could be enlarged to include human security. Border security also has a free trade agreement (FTA) and a national dimension, in addition to international norms at the WTO and the UN(Sohn and Yeo, 2022). In this context, Protectionism through tariff and non-tariff barriers can be understood by understanding the true sense of protectionism which is the economic policy of restraining the trade between the countries with the methods of the tariff specified on the goods which are imported and some non-tariff implications on other goods and services. Tariff protectionism implies the taxes and duties imposed on the imports which are government levied (Li, and Beghin, 2017, p. 170). Nontariff barriers in the field of services are defined with the understanding of protectionist measurements related to the several difficulties in the market like asymmetries in the information of consumer goods and the existence of externalities.

There are some arguments made in justification of protectionism where the tendency for unfair competition for emerging markets is one of the arguments. According to Giampietro, (2019, p. 144), narrative economic decoupling takes place when the returns of a particular asset class have been made a correlation with other assets in the past, not able to move in step as per the expectations. Decoupling also referred to the distinction between the country's investment, the performance of the market and also state the underlying economic growth.

With the trade establishment, self-sufficiency can be considered. However, there are some of the barriers that take place in this progress of self-sufficiency with the economic growth like challenges in employment, strain in the economy, custody with the accessibility of issues, abuse or harassment, effects due to violence, and others. self-sufficiency can also raise the cost by slowing down the advancement in technology where overcapacity of products with less sophisticated results also creates barriers. as opined by Angus, (2020, p. 1895), world trade organizations can also be considered to hit these barriers and complaints with the existence of unfair trade competition and practices.

Conclusion
At the end of the essay, the conclusion can be made where national security and its impact on the country's trade protectionism are considered. By analyzing the various factors of trade, tariff, cost advantage, and industrial growth and resolution the narrative economic growth has been evaluated.

Ruffin, R.J., 2017. Mill and Ricardo: The Genesis of Comparative