Task: Answer the following questions through this economics assignment:
Question 1
Assume that Canada is an importer of smartphones and that there are no trade restrictions. Canadian consumers buy 1 million smartphones per year, of which 300 000 are produced domestically and 700,000 are imported.

a. Suppose that a technological advance among Japanese smartphone manufacturers causes the world price of smartphones to fall by $50. Draw a graph to show how this change affects the welfare of Canadian consumers and Canadian producers and how it affects total surplus in Canada.
b. After the fall in price, consumers buy 1.5 million smartphones, of which 200,000 are produced domestically and 1.3 million are imported. Calculate the change in consumer surplus, producer surplus, and total surplus from the price reduction.
c. If the government responded by putting a $50 tariff on imported smartphones, what would this do? Calculate the revenue that would be raised and the deadweight loss. Would it be a good policy from the standpoint of Canadian welfare? Who might support the policy? Who might oppose it
d. Suppose that the fall in price is attributable not to technological advance but to a $50 per smartphone subsidy from the Japanese government to Japanese industry. How would this affect your analysis?

Question 4
The market for chicken pie in Ottawa is competitive and has the following demand schedule: 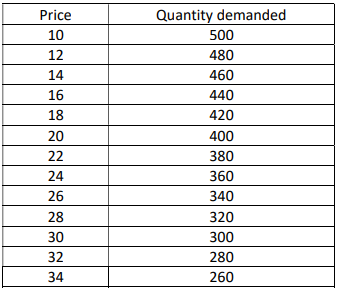 Each producer in the market has fixed cost of $24 and the following marginal cost: 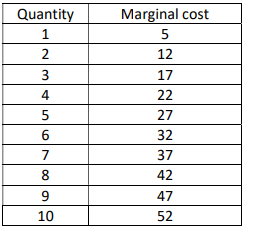 a. Compute each producer’s total cost and average total cost for 1-10 pies.
Hint: Find the first variable cost when Q=1, and then TC using MC.

Question 5:
Ottawa is a town with 300 adults and 200 children, and you are thinking about putting on a concert to entertain your community and make some money. This type of concert has a fixed cost of S2,000, but selling an extra ticket has zero marginal cost. Here are the demand schedules for adults and children in your community:

a. To maximize profit, what price would you charge for an adult ticket? For a child's ticket? How much profit do you make? Explain.

b. The town council passes a law prohibiting you from charging different prices to different customers. What price do you set for a ticket now? How much profit do you make? Hint: Explain with a diagram and/or complete the table.

c. Who is worse off because of the law prohibiting price discrimination? Who is better off? Hint: Quantify the changes in welfare. 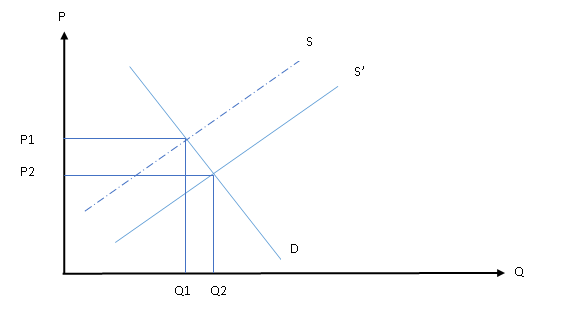 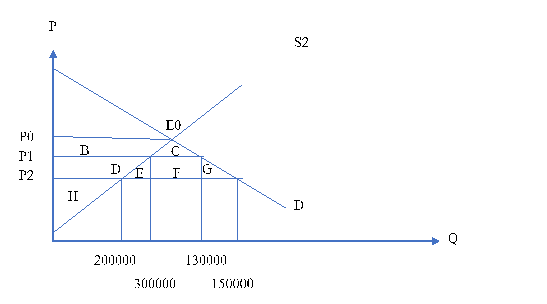 Hence, government will earn $50 tax revenue against each smartphone import.

Thus, with the imposition of the tax government will earn $35 million as tax revenue that can be used in infrastructural development for economic growth of the state. However, there will be deadweight loss due to the transaction. Amount of deadweight loss will be equal to area of E+G. Hence total deadweight loss due to the transaction will be ($2500000 + $3750000) = $6250000. Total tax revenue is much higher than the deadweight loss and thus it total social welfare will surpass the loss (Graham 2020). Thus, the tax will be a good policy from Canadian welfare standpoint.
Government and producers might support the policy, whereas, consumers might oppose the same as it will reduce the consumer surplus.
d.If the price of smartphones is attributed not by the technological advancement but by subsidy from Japanese government, then it will not influence the world price. As the price is domestically influenced by the subsidy and not by the technological development, price in world market will not reduce rather reduce in domestic market only.
Answer to question 2:
a.As per the given information, due to the theatre in Ottawa, people of the community will be adversely affected due to the extra traffic. Hence, this type of externality is negative externality as cost suffered by the community is a consequence of the operation by the theatre. Hence, the operation of the theatre leads to negative impact on the community through increasing traffic and thus it can be termed as the negative externality.

b.The event of negative externality can be explained with the following figure:
As per the figure above it can be seen that X axis has presented the quantity output and Y axis has presented the price. Marginal Private Benefit (MPB) and Marginal Social Benefit (MSB) has been drawn which are negatively sloped straight line as with rise in output both MSB and MPB tends to rise as the output increases (Ludema and Wooton 2017). On the other hand, Marginal Social Cost (MSC) has been drawn as an upward sloping straight line as MSC tends to increase with the rise in output and it is same as Marginal Personal Cost (MPC). Difference between the MSB and MPB is the externality represented as the Marginal External Cost (MEC) which is $7 in monetary terms as per given information. If there is government intervention, then output will be Q1 as society will produce at socially beneficial point which is E1 and the price will be P1 but charged S1; otherwise, it output would be E0, which is private beneficial point where output will be Q0 and price will be P0. 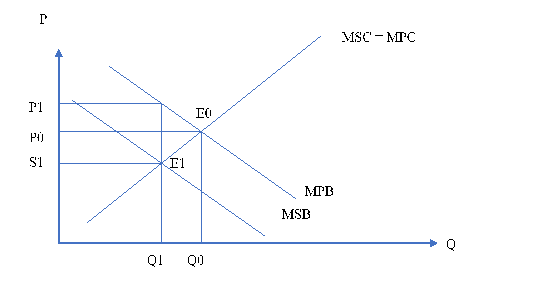 d.Underpinning the new situation, it can be seen that society achieves both positive and negative externality through the theatre. This situation can be explained through the following figure: 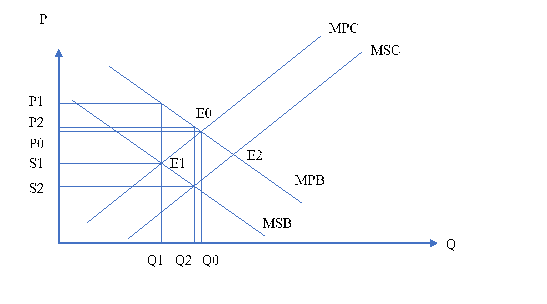 Figure 4: Impact of externality on society

As per the figure 4 like figure 1, X axis demonstrates output (Q) and Y axis demonstrates price (P). Here, MSB and MPB has been negatively sloped straight line and MPC, MSC are positively slope straight line (Nieuwland and Van 2020). There is negative externality, which has been depicted by the difference between MSB and MPB and valued at $7. On the other hand, there is positive externality leading to fall in cost causing MPC to shift to MSC and the difference between MSC and MPC is positive externality valued at $5. Now, if there is no government intervention, then initial equilibrium will take place at E0, where MPB and MPC equates. At this point, output will be Q0 and the price to the society will be P0. With the government intervention, output initially would shift to Q1 as new equilibrium would be at E1. At this point, society will face price of S1 whereas, theatre will face price of P1. Now, when the positive externality comes in, then new equilibrium comes at E2 where output become Q2 and price will be P2, which is lower than S1. Hence, in total the there will be rise in output from Q1, which is socially optimised output, however, output will be lower than personal beneficial output level. In terms of price, total negative externality will be ($7 - $5 = $2) and the price to society will be S2.

e.Society due the operation of the theatre would face a negative externality of $2. In order to allow the theatre, operate, government need to impose a tax of $2. Through the tax, government can modernise the transportation that will reduce the traffic. On the other hand, through the tax, theatre can operate and allow enhanced road safety.

Answer to question 3:
a.Average tax is defined as the total tax paid divided by income. Following the same rule, proportional, regressive and regressive tax has been calculated for three different income level and divided by total income.

b.Marginal tax rate is calculated as the extra tax paid on additional income divided by the increased income.

Answer to question 4:
a. In order to calculate the Total Cost (TC) and Average Total Cost (ATC), Total Variable Cost (TVC) and Total Fixed Cost (TFC) has been calculated. Total Cost is the sum of TVC and TFC and ATC is cost incurred based in production per unit (Q).

Hence,
TC = TVC + TFC
ATC = TC/Q
On the other hand, TVC is calculated by sum of Marginal Cost (MC) and MC at preceding level. TFC is provided that fixed at $24. Considering the formula of TVC, TFC, TC and ATC, following table has been developed:

Table 2: Calculation of TC and ATC

As per the table above, Total Cost and Average Total Cost has been presented.

As per the given demand schedule, at $26 price, quantity demanded is 340 unit.
As the firm is competitive in nature, hence, profit maximisation takes place where price equates with MC; thus, firm will produce till such point where MC equates with the price.
As per table 2, output is 4.81 at MC of $26. Hence, firm will either produce 4 unit of output or 5 unit of output. However, if the output is 5 unit, then MC will surpass the price. Hence, as per the profit maximisation theory of perfect competition, firms will produce 4 unit of output.
Thus, the number of firms will be: Total quantity demand/ supply by each firm
Hence, number of firms: 340/4 = 85
ATC at 4 unit of output is $20
Thus profit: Total revenue – Total cost
Profit: (4 * $26) – (4 * $20) = $104 – $80 = $24
Hence, as per the analysis, 340 units of pies will be sold in the market and each producer will make 4 pies each. In the market there is 85 producers and the profit of each producer will be $24.

Answer to question 5:
a.

c.If the price is set at $7, then though all adult in the Ottawa town could afford tickets, however, no children can purchase tickets. Moreover, organiser of the concert would make profit of $100 only due to prohibition of price discrimination, which otherwise would have been $900. Hence, if price discrimination is prohibited, then both the organiser and the children would be worse off. If the price discrimination is prohibited, then no one would better off as with the fall in marginal revenue with price $7, there will be rise in deadweight loss resulting fall in overall social welfare.

d.If the fixed cost become $3000 instead of $2000, then though the revenue would remain same, profit would fall largely.

However, as the fixed cost changes, no change in social welfare can be observed leading to no change in the situation of the organiser and children and they will remain worse off.