Introduction
This Economics Assignment provides a summary of the article by Sydney Morning Herald called ‘Australian Dollar tumbles to ten year low' (Moore, 2019). The paper uses the demand and supply model to determine the factors involved in the unstable Australian dollar and US dollar exchange rates. This Economics Assignment discusses these factors in detail and provides analysis. It also discusses the effect of manufacturing PMI, commodity prices and interest rates on the Australian dollar. The finally section of the Economics Assignment introduces the actions taken by the Reserve Bank of Australia to mitigate these factors and the side effects of those activities.

a) Summary of the article
At the end of the 2nd January 2018, the Australian dollar went below US70¢ marking the lowest price since 2008. Until 10 AM Australian time, the dollar had fallen up to US67.49c, although it somewhat recovered by fetching around US68.71c by the day’s end.

Previously the currency appreciated by 8.7 percent in 2017, showing an upward growth while declining 3.4 percent by the end of the year 2018. Due to the weaker growth in China, Germany, and Europe especially in Italy and Spain, the value of the Australian dollar was depreciating (Hall, 2019).

Over the last two years, the global market PMI fell for the eighth time straight in December. The growth in output remained low, and rates of new orders also increased the growth in the employment sector slowed down and deterioration was seen in the international trade flows. PMI of all major economies during the second half of 2018 fell except India.

Copper and aluminum prices in the London market dropped sharply not helping the sentiment for the AUD. The GDP of the economy is predicted to be at the rate of 2.8 percent in the current fiscal declining up to 2.7 percent by the year 2020 by the median economist (Knaus, 2019). The Australian dollar was estimated to be slightly lower to US70¢ over the next year.

b) Analysis of the AUD-USD exchange rates 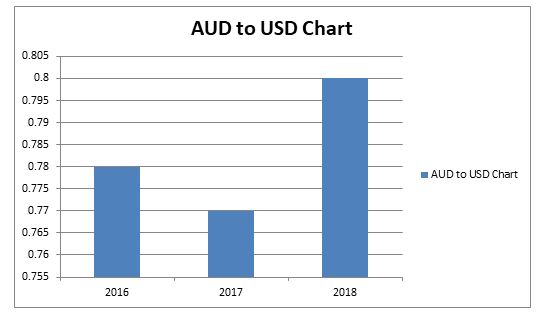 The Australian dollar has shown significant downfall in the last three years. The currency is the casualty of the US and China trade war. Due to the application of US's administrative decision of protectionism the economy suffered a downfall in the last couple of years. The collapse of the Australian dollar is a result of a deteriorating domestic market, tight loan conditions and weakened demand (Vodenska, et al., 2016). The mortgages have become more expensive even though the Reserve Bank of Australia kept its cash rate at 1.5 percent since 2016. In the recent scenario, the dwelling prices have eased, but the progress in the housing sector is still too low triggering concerns among the policymakers. The RBA does not want to change its monetary policy with the upcoming hike in the interest rates in 2020. However, the employment sector has shown appreciation from 2017 to 2018, with an increased rate of participation to 65.7 percent contributing to strengthening the economy.

C) Impact on the AUD-USD market
The factors which impacted the prices of the AUD were due to the slowdown in Germany due tothe new orders for the European manufacturing industries falling for straight three months. A marginal increase in the outputs served as declining factors in the work backlog. Employment growth remained stable but is predicted to not last due to the deterioration of the new orders and the extension (Jan &Gopalaswamy, 2019). The global manufacturing PMI fell for straight eight months continuously over the last two years. The growth in output remained low and increased rates of new orders with slowed down employment growth deteriorated the international trade flows. The downward decline of Caixin, as well as official manufacturing PMI's in China, continued. The drop in the prices of copper and aluminum in the London exchange ended with the downward mark. The median economist predicts that the GDP will slow down to 2.7 percent in the year 2020; however it is 2.8 percent in the current year (Exchange rates still impact on trade, 2019).

Australia is the second largest producer of gold, and the prices of gold have a high impact on the Australian dollar (Basher &Sadorsky, 2016). The recent trend shows the fluctuation of the gold prices in the global market mainly showing a downward trend, which was also a vital reason for the depreciated value of the Australian dollar.

In order to stabilise the economy from the increase in the inflation rates, the Reserve Bank of Australia cut the interest rates in the second half of 2018 resulting in a hike of the US dollar against the Australian dollar.

d) Effect on the Australian economy
The rate of exchange plays an essential role in imports as well as exports in Australia. Depreciation of the Australian dollar encourages substitution of domestically produced goods and service from imported items. The prices of the imported items as discussed in this aud usd exchange rate analysis become more expensive in relative terms. A decline in the exchange rates also means more competition in the global markets for Australian exports, as goods and services become cheaper relatively in terms of foreign currency. The software products will become less expensive when exported to the United States due to a hike in the prices of the US dollar (Heath, 2019). The drop in the prices will mean more products sold in the US market, and therefore the company will generate profit.

The decline of the Australian Dollar will lead to a drop in the housing sector of the economy; the prices for dwellings will increase with the increased rates of the US dollar in the Australian market. The economic expansion of the market will be soft. The sales in the retail sector will also experience a downfall. The high stock in the debt market, as well as the unremarkable wage dynamics, will affect the spending decisions of the consumers, Although the employment market stayed unaffected and experienced a six-year low which was a good thing overall. The exports of goods and services also increased with the increase of the US Dollar.

e) Actions were taken by the reserve bank

Due to the stable cash rate kept by the RBA the interest rates in the future seemed less dovish compared to the initial wagering of the markets. The interest rates have a 50 percent chance to have a rate cut by the end of the year which reflects the deteriorating growth in the momentum in the growing international and national risks. The downside risks gradually increased post-decision. The primary concern for the economy remains on the falling prices in the dwelling market and household spending in some cities. The 1.8 trillion Dollar market will be likely to expand at the rate of 2.7 percent in the current fiscal which will be regarded low considering the history of the Australian economy (The Exchange Rate and the Reserve Bank's Role in the Foreign Exchange Market | RBA, 2019).

The primary concern with the lowered interest rates for an extended period is that inflation will increase. The increase in inflation rates will be considered dangerous and unstoppable. The RBA tends to wait until the last moment to observe the changes in inflation rates. With the increase in the inflation rates, the unemployment rates will also increase which will be harmful in these volatile market conditions. A further cut in the interest rates will raise the price of the domestic goods and services which will be considered bad for the affordability of the general public. The slowed rate of interest will also slow down the GDP and trigger a recession in the country. This will create a problem in the financial stability of the country.

Conclusion
The Economics Assignment concludes that the falling prices in the exchange rates of the Australian Dollar have created significant problems in the economy. The drop in the value of the AUD is mainly due to the prolonged lowered cash rate set by the Reserve Bank of Australia. However other factors like decline in the manufacturing PMI's in China, Germany, and EuroZone are also responsible more or less for the unstable Australian Dollar. The Economics Assignment finally concludes that the depreciated prices of the Australian dollar will cause the expansion of the economy around 3 percent which will be considered low. Economics assignments are being prepared by our Economics homework help experts from top universities which let us to provide you a reliable assignment help Australia service.

Hall, J. (2019). The Aussie dollar has recovered after hitting a 10-year low. Retrieved from https://www.news.com.au/finance/markets/australian-markets/the-aussie-dollar-has-gone-from-zero-to-hero-after-a-10year-low-last-week/news-story/5af391fe53f9a877a79d09a93105dfe0

The Exchange Rate and the Reserve Bank's Role in the Foreign Exchange Market | RBA.(2019). Reserve Bank of Australia. Retrieved 26 March 2019, from https://www.rba.gov.au/mkt-operations/ex-rate-rba-role-fx-mkt.html