BRICS considers 5 countries which have the fastest-growing markets across the world for years. India also has an emerging market due to its low costs of labour, sufficient amount of natural resources and favourable demographics and so on. Instead of emerging economy, India is still a developing country though it has characteristics of becoming a developed one. Hence, this part is going to analyse the characteristics of India considering its prosperity, innovation capacity and governance. Thus, the study intends to analyse the macroeconomic condition of India to understand whether India has enough potential to become a developed nation or not.

Countries of BRICS have been growing significantly over the last many years even before the formation of the concept. By adopting various macroeconomic policies, India has already achieved economic growth and development like others. Economists expect that the country has enough potential to develop further in future (Mohanty and Sethi 2019). The growth rate of India has always remained positive for last many years even during the Global Financial Crisis of 2008. This steady growth has occurred due to the economic background, stable political condition anda large size of population. According to the World Bank, India has stable financial systems along with established policy transmissions that can influence investment growth in the country. As a result, the financial structure facilitates gross domestic product of the country to improve significantly over the years (Min, Wang and Yu 2020). To understand the reason of India’s developing condition and the expectation for future growth, macroeconomic indicators can be discussed considering the data of previous years. The considered macroeconomic indicators considered in this discussion are the Gross Domestic Product (GDP), GDP per capita, Unemployment, Inflation, Gini-Index, Foreign Direct Investment (FDI), Investment and Poverty Rates.

GDP growth rate of India has remained almost stable till 2019 due to its dynamic emerging markets and it is expected that the economy can produce more in coming years compared to its previous production level. However, the recent pandemic situation has forced domestic productions to remain closed and consequently the growth rate falls sharply. However, considering the previous performance level of India, it is expected that the country will recover soon by applying all of its potential production capabilities.

GDP per capita growth of India has fluctuated over the last 20 years but has remained high in most of the years. The per capital income came to the minimum point in 2008 due to global financial crisis. Again after 2016, this macroeconomic indicator has started to decline due to comparatively low GDP growth and rapid increase of population. 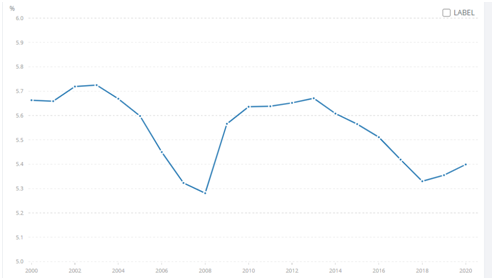 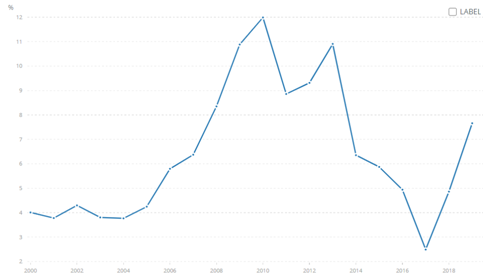 The general price level of India has remained below 10% in most of the years, except the period of financial crisis. The inflation rate beyond the targeted one has an adverse impact on the economic growth. In most of the developed countries, the inflation rate remains below 2% which India cannot maintain. Hence, the country is a developing one as the price level does not remain stable over the years.

Gini Coefficient of India was 47.9% in 2018. The Gini Index measures the income distribution of the country’s entire population to understand the level of economic inequality. Initially, the index of India was 33% before 2014 and became 60% after this year (knoema.com 2020). However, it again has declined to 47.9%. It implies that the income inequality of the country increased after 2014 though it has reduced later due to growth of per capita income.

Foreign Direct Investment (FDI) is considered as an important driver of economic growth. FDI also as a non-financial resource, also plays a major role in economic development of India. By investing in domestic companies, foreign companies try to take advantage of India’s existing lower wages and special investment privileges and so on. It is considered that by getting foreign investment, the country can get the knowledge of upgraded technical knowledge and the opportunity of employment generation. The above figure shows that the figure of FDI in terms of USD Million has remained almost stable over the years.

Developed countries have highly emerged economies including technical progress and higher living standards. As a result, Britain, Japan, Australia etc are known as developed countries s they have almost same economic characteristics. On the contrary, India is considered as a developing country due to its low rank in human development index, high Gini Coefficient and low industrialisation. The slow growth of GDP, comparatively high unemployment, negative balance of trade, low living standards and high-income inequality leads the country to become a developing nation instead of a developed one. Thus, it can be said that India can be developed in future only if it can recover its macroeconomic performance.

There are some other factors like innovation system, prosperity and governance structure that can help India to develop in near future. According to the Global Innovation Index (GII), India’s rank was 29th for last 5 years after improving its position from 81. It implies that India is improving its innovation system over the years and it can help the country to become a developed nation by improving its GDP growth, employment opportunity, living standard and income equality. In terms of economic activities, Indian economy is rich with prosperity due to its continuous growth in service sector. Moreover, the well-structured and well-established governance structure of the economy will lead the India to achieve its growth significantly in coming years. ?