Task 1: Elasticity
Consider the following two products: 3D television and prescription. Which product would have a higher price elasticity of demand in absolute value? Explain your answer including identifying the determinant of elasticity

In the following graph, the demand for tyres has shifted to the left because the price of cars has increased from, on average $25,000 to $35,000 per car. Use the graph to answer question 3.

Calculate the cross-price elasticity of demand between tyres and cars. Show your calculations and explain your answer in words.

Task 2: Costs of Production
Explain whether the following events in questions 1 and 2 will affect fixed costs or variable costs (make sure you justify your answer):

Airbus and Dreamliner Battle for Air Space
The world's largest passenger plane [Airbus] has proven to be the most expensive civilian airplane ever developed. Airbus claims its fuel efficiency, control system and sound-reduction technology also make it the most advanced airliner ever built. The Dreamliner travels the same distance as the A380 [Airbus] at the same speed but carries half the passengers.
Author: Davin Coburn Jun 15, 2010
Source: http://www.popularmechanics.com/flight/a5819/airbus-vs-boeing-battle-for-air-space/

Task 3: Market Power
Graph and explain the situation for Adidas if it was the only seller of exercise running shoes in Australia. Contrast this with the situation when many other brands enter the market selling similar products. Use a graph and explain your answer. When drawing graphs assume the firm is in the long run

Task 4: Business Strategy
Consider the example where Jim’s coffee (they seem to sell everything else) wants to open a store but a major existing company Stars and Coffee threatens Jim’s by saying if you enter I will charge lower prices. The pay-off matrix is below. Answer questions 1 to 5.

Task 1: Elasticity
1) A higher absolute value of elasticity would be found for 3D Television since it is a luxury item and more susceptible to change in demand with regards to changes in price. Prescription on the other hand is a necessary item whose demand would be relatively less volatile to changes in price (Arnold, 2015).

2) Coffee sold in a café would have higher absolute value of elasticity since there are multiple cafes providing coffee and hence the consumer can easily find comparable cheaper alternative. This is not possible for electricity which is a more basic product and also has limited suppliers (Mankiw, 2014).

The above cross elasticity of demand implies that a unit percentage increase in car price would decrease the quantity demanded of tyres by 0.5%. Further, since the cross price elasticity is positive, hence the two products are complements (Nicholson and Snyder, 2015).

Task 2: Costs of Production
1) It is an example of a fixed cost since the license fee is independent of the number of number of subscribers, revenue generation or time of broadcast (Mankiw, Mankiw and Taylor, 2011).

3) With regards to long term costs associated with the flying operation, there are two aspects namely the fixed costs and the variable costs. In this case, there are two competing aircrafts in the form of Airbus A380 and Dreamliner. Both the aircrafts have their respective pros and cons. For instance, in regards to Airbus A380, the fixed costs is higher but the operating costs per passenger per mile would be lower owing to this being a more fuel efficient plane and has a double capacity in comparison with Dreamliner. With regards to Dreamliner, the advantage lies in the lower fixed costs owing to lower cost of acquisition for the plane but comparatively higher operating costs (Nicholson and Snyder, 2015).

Considering the above merits and demerits of the two planes, it makes sense to use the two planes in specialised situations. Dreamliner as an aircraft would be preferred for short haul flights which would have limited demand and hence a lower capacity and lower efficiency plane is preferable. On the other hand, an Airbus A380 would be preferred for long distance non-stop flights on major inter-continental routes where the demand is comparatively higher. Hence, considering a hub and spoke model followed by the airline company. The company would use the Airbus A380 for transport between the hubs and then the Dreamliner can be used to transport passengers to the respective spokes. This would ensure that the long term costs are minimised for the company (Mankiw, 2014).

Task 3: Market Power
1) If Adidas is the only seller, then the market would be a monopoly. The long run equilibrium in this market is indicated below (Krugman and Wells, 2014). 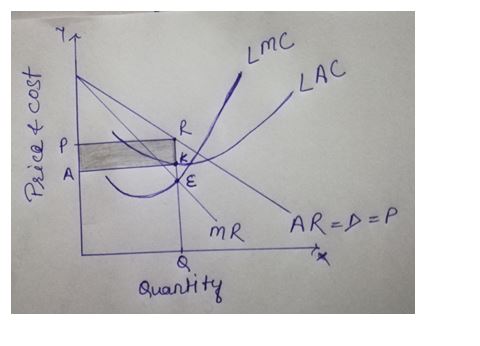 It is apparent from the above graph that the firm is earning an abnormal profit in the long term by maintaining output artificially low so as to keep price high. Further, since no new player can enter the market, hence the above situation is sustainable (Nicholson and Snyder, 2015).

In comparison, if there are a lot of players selling similar products, then the corresponding market would be monopolistic competition. The long run equilibrium graph is indicated below (Arnold, 2015). 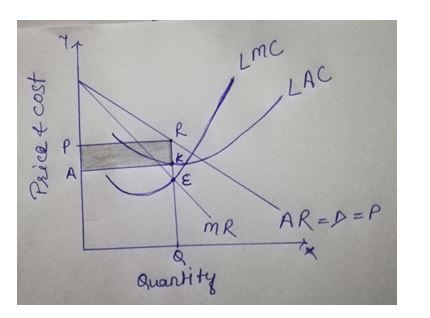 In the long run only normal profit is earned since new players can enter the market owing to existence of low entry barriers leading to higher competition (Mankiw, 2014).

2) With regards to cattle ranchers globally, a noteworthy aspect is that the product being sold is identical and therefore the underlying market is closest to perfect competition. Also, the various cattle ranchers are price takers since the respective market share of an individual cattle rancher is negligible. The impact is that these are essentially price takers based on underlying demand and supply in the industry. If the price charged by a cattle rancher exceeds the industry price, then the sales would dip to zero. Hence, the demand curve is horizontal (Nicholson and Snyder, 2015).

In sharp contrast, the McDonalds restaurants are part of a monopolistically competitive market since there are multiple fast food chains which are present in the market. Also, a McDonalds restaurant can differentiate itself from the competitors as the product are service are not identical and hence there is some market power and associated pricing power which leads to a downward sloping demand curve. If there are two McDonalds restaurants located next to each other, then it might lead to an oligopoly type situation where the demand curve would be kinked since decision by one restaurant would be influenced by decisions taken by other (Mankiw, Mankiw and Taylor, 2011).

TASK 4: BUSINESS STRATEGY
1) A dominant strategy is the strategy which tends to provide the player with a higher payoff in comparison to the other strategy irrespective of the choice made by the other player (Nicholson and Snyder, 2015).

2) Jim’s coffee does not have a dominant strategy since if it decides to enter then the minimum payoff is 1 million loss which is lesser than no profit no loss payoff in the other strategy. Similarly, if it decides not to enter, then the payoff in entering strategy could be 2 million (Mankiw, 2014).

5) No, Jim’s coffee must not believe the threat given by Stars and Coffee. This is because by choosing to lower prices their profits would lower and their interest is best served by charging higher prices irrespective of whether Jim’s Coffee makes an entry into the market or not (Mankiw, Mankiw and Taylor, 2011)..