Abstract
According to the research on cyber security assignment, it is stated that the cryptographic operation is a hash function that can convert input message into variable length to get a fixed output known as the message digest or message hash. Mostly, the hash function is found in data integrity mechanisms, authentication schemes, digital signatures, and the random number of generations. To get an initial message, the hash value is computed through a modern cryptographic hash function. While there is a collision in finding two different messages, the property of the hash function is much difficult due to which the function is widely used in security protocols that are popular namely the Internet Protocol Security or Transport Layer Security.

1. Introduction
In 1995, the SHA-1 function is widely used by NIST standard cryptographic hash function. It is deprecated officially by NIST in the year 2011. There was a weakness in the fundamental security that demonstrated some theoretical attacks and analyses. Apart from such deprecation, in 2017, SHA-1 was used widely for document and signature certificates of TLS. Along with more software of GIT versioning system that has a purpose for back up and integrity. This report describes the function of SHA-1 and its structure with certain advantages and limitations.

2. Description
The SHA-1 is a cryptographic hash function that stands for Secure Hash Algorithm-1. For the algorithm, it is the first iteration. When there is an input with a hash value it will produce 160-bits for 20-byte (Leurent and Peyrin, 2019). As it is known that SHA-1 is also named as a message digest, it renders the hexadecimal number whose length would be around 40 digits. It is a very important design introduced by the National Security Agency of the United State. Unfortunately, since 2005, SHA-1 was insecure for large industries. By the time of 2017, no browsers like Google, Mozilla, Microsoft accepted SHA-1 SSL certificates.

Even in the Java language, the MessageDigest Class will be used for calculating the hash value of cryptographic that also within the java.security package. While SHA-1 is generated with other algorithms with a static method call as getInstance() method. In the final selection of the algorithm, the calculation is done for the message digest value to get the result as a byte array (Al-Odat, Ali and Khan, 2018). This byte array will further get converted by using BigIntegerand get signum representation. Then further it gets converted to hexadecimal format and the Message Digest as expected.

3. SHA-1 Structure
The SHA-1 converts messages to a unique representation whose length is multiple of 512 bits where the information is not a loss for the original length. Further, multiple zeros are added to reach the target (Chaves et al., 2016). To reach the length of 64 bits with a multiple of 512 bits. Block 512 expands each time when it is used with 32-bit subkeys. The initial 16 subkeys are blocks. Other subkeys are N-3, N-8, N-14, and N-16 where N is exclusive which is subjected to left shift by one place. With hexadecimal, the value starts with a 160-bit block namely EFCDB89 C3D2E1F0 67452301 98BADCFE 10325476 with the process input of block 512-bit whose message is modified (Makkad and Sahu, 2016). The beginning of the value enciphers with the use of 80 subkeys that has the block with the current message.

The SHA enciphers a 160-bit block having 80 times 32-bit subkeys with 80 rounds (Júnior, Torquato, and Fernandes, 2018). The series is similar to Feistel rounds having two halves of the block divided with a piece of five. Of the five pieces, four are calculated as F-function with XOR function having three pieces along with fourth left shift and having one piece that is XORed to the current round's constant and subkeys. With 20 rounds each group has the same constant. With left shift circulating the blocks that rotate 160-bit blocks. In every 20 rounds, there is a change in the constant and the F-function (Suhaili and Watanabe, 2016). There is a block of 160-bit, that has five pieces to encrypt a, b, c, d, and e, which rounds the SHA “block cipher”

The illustration is given in the diagram below: 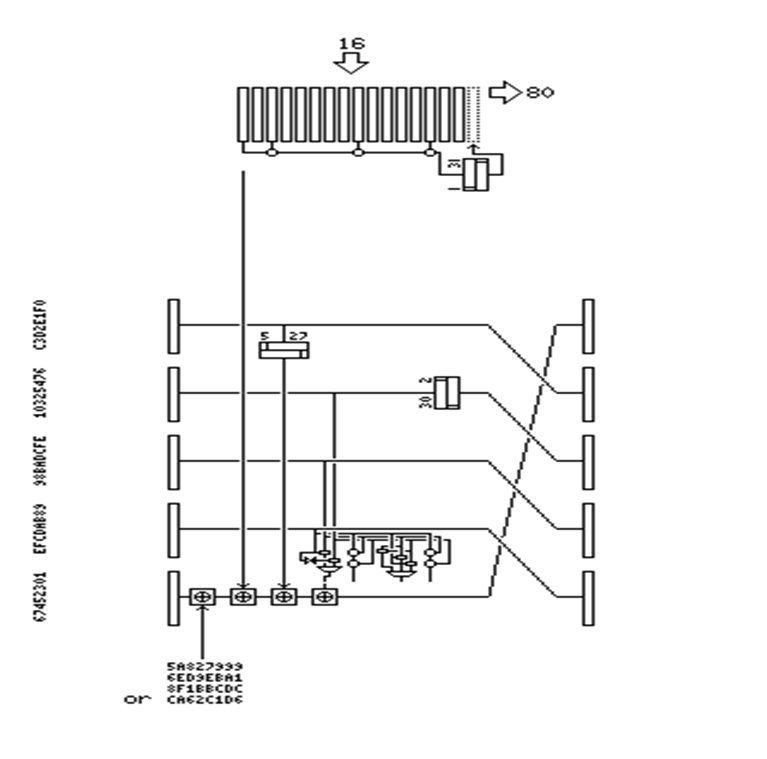 4. Advantages
The advantages of SHA-1 arediscussed below:

5. Limitations
There are certain limitations in the SHA-1 hash function and are discussed below:

6. Conclusion
Thus, from the report, it can be concluded that SHA-1 is the most popular one. The message digest that SHA-1 produces has a fixed-length output. It is then inputted to a digital signature algorithm through which a signature is generated for the message. Unfortunately, the SHA-1 hash function to some extend is found to be unsafe for most of the browsers for which they have banned the services. However, in many of the websites, it is still used internally as a secure service and mainly for internal purposes only. As there are some advantages to the SHA-1 function and also some limitations.

Leurent, G. and Peyrin, T., 2019, May. From collisions to chosen-prefix collisions application to full SHA-1. In Annual International Conference on the Theory and Applications of Cryptographic Techniques (pp. 527-555). Springer, Cham.

Mezher, M. and Ibrahim, A., 2019, February. Introducing practical sha-1 collisions to the classroom. In Proceedings of the 50th ACM Technical Symposium on Computer Science Education (pp. 879-884).