Task: Provide a short description of the Cost Leadership Strategy of ALDI.

Introduction
The ALDI Cost Leadership strategy is mainly accredited for the brands growth, success and expansion. ALDI is a major hypermarket marque headquartered in Germany which has around 10000 outlets all around the world which generates an overall turnover revenue of €50 billion. The supermarket chain was established in 1946 by two brothers, Karl, and Theo Albrecht. If considered the operation and business of ALDI in Germany, it has around 2500 outlets all over the country. The company has extended its chains of outlets around 20 countries. ALDI stores are deemed to be the best example for so-called no-frill stores where most of the products are displayed for very attractive discounts. Apart from this, Aldi is also the largest wine supplier in Germany. ALDI has a large reputation in the international market, as a corroboration, they had won the Supermarket of The Year for two consecutive years of 2012 and 2013 in the UK (ALDI UK | Homepage 2017). Various strategical advancements have been implemented by the company to augment the structure of the company to cope up with the present digital economy. The company has also press forwarded to adopt environment-friendly strategies like the carbon-neutral policy to curtail its greenhouse gas and carbon emission by around 53%. In the US the company has adopted the policy of employing minimal employees in their store and thus are being successful in providing the staff with a comparatively higher salary which is quite contrary to the other supermarkets operating in America. The company had also earned some bad reputation in some companies, for instance, the ALDI group is blamed as the organization with a lack of corporate responsibility.

The concept of cost leadership strategy simply means the plant to deliver the product of concerned company at a cheaper price than their rivals and hence attract more customers to themselves. If compared to major multinational chains like Woolworths and Coles, ALDI is providing cheaper costs because of its Cost Leadership Strategy. At a global level, this strategy has helped the company a lot, which is evident from the fact that in 2015 they have showcased a 12.1% growth in the grocery market of Australia. The figure given below provides the progress of ALDI and other supermarket companies in the total grocery market from the period of 2017 to 2018. 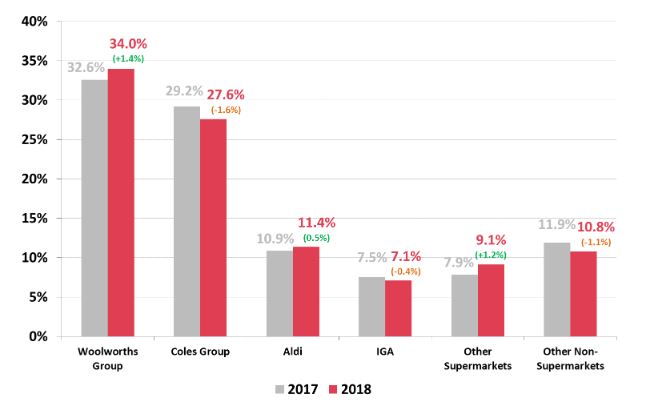 In the figure above we can see that the ALDI group has performed very well in the year 2018. The company had managed to raise its share of the total grocery market by a range of 0.5 points which made it touch a peak of 11.4%. For a better and thorough insight over the company’s market, let’s get into the Market share over time analysis of the companies in the grocery markets of Australia. 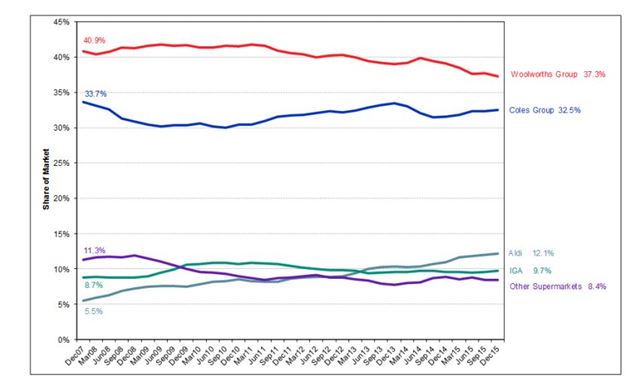 From the above figure, it is very clear that Woolworths is the biggest challenger for the ALDI company in the domestic market of Australia. But the market share of Woolworth ha degenerated 1.2% i.e. from 38.5% to 37.3%. This is a very positive sign for the ALDI group. It should also be noted that the vehement competitors of the company like Coles are performing very good in the market which has increase its share in the Australian market from 31.8% to 32.5%. The companies like IGA seem to be not at all a competitor for our company since the market share of the company is constant at 9.7% for a long period. To go further deep into the present competition in the supermarket division of the supermarket lets dive into the trends followed by the Australian population. 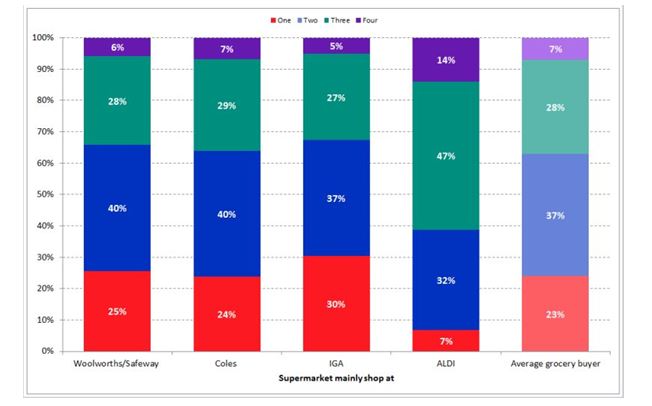 It could be accessed from the above histogram that the IGA group has the widest range of loyal customers. ALDI group should focus majorly on targeting these customers to overtake the market. This is a very significant and critical data since ALDI has a very small ratio (7%) of loyal customers in the market. Their greatest facet of customers in ALDI (47%) visits at least three supermarkets simultaneously which indicates a very low profile among the customers. The above condition has occurred because the group had not focused on providing the customers with a wide range of varieties. ALDIS’s Cost Leadership strategy has ensured the brand is able to deliver customers with exceptionally cheap products.

With the advent of new technologies in the modern period, the company has installed very modern technology and machinery in their stores for the sake of increasing their productivity. It was observed that many companies had increased their sales and productivity by installing advanced and appropriate technologies in their organizations. This advancement, besides boosting the process and productivity of the firm, also delivers a very efficient promotion to the brand as it attracts and persuades the consumes towards its product and services and hence eventually contributing to the revenue and profit of the company in a very tremendous way.

The term and the concept of Comparative destruction were pinned to the academic and practical economic world by the renowned analyst and researcher Joseph Schumpeter in the year 1950 (Schumpeter, 2013). It was from the works and ideologies of Karl Marx that Schumpeter had derived the concept of Comparative destruction. As per the concepts entailed in this theory the changes in the processes of industries because of the constraints like modern techniques in production, innovative measures, new products, new markets, etc. sustains the dynamics and progress of the capitalist economy. By the term comparative destruction, it is aimed to eliminate the measures like the outdated system of measurement as a consequence of updating the business with new technologies. Since the concept plays a very significant role in the sustainable economic development of the organization along with facilitating cost-effective measures, comparative destruction is a very important theory in economics (Hall, 2013).

As discussed earlier, the digital economy has become predominant in the international market because of the new advents in science and technology. To adapt to the current dynamics in the market and to keep their pace ahead to the competitors ALDI has equipped its system with the most modern technologies. For this purpose, they have entered into a contract with VeriFone, which will provide all the equipment, software, and technologies to modernize the processes of ALDI Group (Payment Solutions & POS Solutions: Official Verifone US Site. 2017). Because of this development, the company could accept the payment through the online or mobile wallet method from its customers. It is expected that installing such convenient technologies for customer facilitation will help in increasing the overall revenue of the ALDI group by increasing sales. The method of online payment would decrease the level of complexities in the bill payment and will provide more convenience to the customers of ALDI outlets. As a result, the units of the company would be more efficient since the consumers are being handled proficiently and besides that, the motive of cost leadership method could be attained that subsequently reduce the cost of labor. The major benefit of accepting the online payment is that the customer will be using his cellphone to transact the money, thus the company need not invest much for the pieces of machinery and employees in the billing section (Guillaume Blanchet, Legendre & He, 2015). Therefore, both customers and the company will get benefitted from admitting new technologies into the business.

As part of a cost leadership strategy, the company had adopted the policy only while the peak hours are active. Just keeping the outlets open at peek hours and closing at the time 7 to 9 pm, reduces the company’s expenditure on employee payroll, electricity, and other utility expenditures. Attempts to keep the stock for very fewer products have also turned out to be a very cost-effective method for the company. The company has provided only a small range of products for each section to carry out this strategy. The company has further made decisions to not give away bags. Although it is creating a little inconvenience to the customers, the company has been able to reap benefits from this move.

By the evaluation of the given case study in this report, it could be understood that how the ALDI Group being an old company has adapted to the new condition in the economy by installing most modern technologies in its system. By acclimatizing itself to the new conditions in the economy the company had efficiently reduced its expenditure by augmenting sales and the cost conditions. By the appliance of comparative destruction theory, ALDI’s Cost Leadership strategy is responsible the successful delivery of convenience to the customers and also in refocusing towards a profit-generating viewpoint. Cost Leadership strategy assignments are being prepared by our marketing assignment help experts from top universities which let us to provide you a reliable online assignment help service.