Task: Richard has a specialist car dealership. He buys old cars, refurbishes them and then sells them. He also hires out cars.

Richard operates his business from a premises which he has leased from George for $ 5 000 per month since January 2016. The lease specifies that the rent is to be paid to George every six months and that it will increase every year by 10%. Richard pays George $ 30 000 in June 2016 and December 2016, but then tells George that he is having financial difficulties and needs every dollar he can to buy equipment. George says “OK, I will let you off paying the increase this year”. Richard is pleased with this, and uses the money he would have had to spend on the rent increase to buy new tools. In June 2017, Richard pays $ 30 000 to George, but George contacts him demanding an additional $ 3 000. When Richard refers to their earlier conversation, George says “Whatever I said, the lease you signed specifies that the rent will go up by 10% each year”.

When Richard goes on holiday, Martin looks after his car lot. Martin doesn’t have a car. However, a friend of Martin’s is about to visit town and he wants to be able to drive her around. Martin goes to Richard and says “Can I hire one of your cars?” Richard says “The usual price is $ 50 per day, but because you looked after my car lot in August, you can hire it at no cost. You can pick it up on Monday”. Martin is very pleased and readily agrees, but when he comes to pick up the car, Richard says that he has hired it out to a customer. Martin says that Richard has breached their agreement.

Advise Richard of his legal position in relation to each of these four scenarios. You should assume that all facts given would be provable if the matters came to court. You should also assume that when any of the people mentioned conduct business, they do so as sole traders, not through corporations.

A. Issue
Issue 1: Richard bought 4 shock absorbers adapted for off road driving for his jeep paying $480 on the suggestion of Emma, the manger of Shocks Are Us. However, when he went for a test drive the shock absorber failed and the car crashed. The damages amounted to $2000. Now, the question is who is liable to bear the loss. Moreover another issue is whether Richard is liable to get any compensation or not.

Issue 2: Richard has been paying a rent of $5000 per month to George as rent for using his premises. The rent is supposed to increase 10% at the end of every six months. However Richard confesses in June that he would not be able to pay the increment due to obscurities in his business, George allowed him the wave off. However, in June 2017, George rang up and demanded extra 4300 from Richard. He disagreed to confirm to any verbal contracts and stated that the specifications of the lease paper would hold. This may be considered a breach of contract.

Issue 3: In the third case Tom’s initial offer of $18500 is discarded by Richard initially. In turn he demands $19000. However when Tom confesses that he is unable to pay the amount, Richard agrees to accept his previous offer. Accordingly, he brings the car to Tom’s place. However, at that time Tom does not accept the car and refuses to pay any amount.

Issue 4: Since Martin looked after Richard’s car lot in august, Richard allowed him to borrow a car without paying. However, when martin goes to pick up the car, Richard says that it has gone on hire. Martin considers this a breach of contract 1.

B. Laws
As per the contracts Act 1999 (section 18A) and the Sale OF Goods Act 1979 (section 14) word of mouth may be considered as a contract. Breach of the contract is equally punishable like breach of written contract. As evident from the Air Studios (Lyndhurst) Limited T/A Entertainment Group v Lombard North Central PLC (2012), the loss amount is liable to be paid by the Shocks on Us company. As per the oral modification clause of the Word of mouth Law, Richard is liable to receive the compensation amount if he is able to substantiate his loss amount via written documents2 .

Again, in the second case a reference from the Thomas KELLOGG v. Cindy SHUSHEREBA (2013) case may be considered. Oren was forced to pay the alleged amount in that case. By the standards of the case Landlord and Tenant Act 1985 (Section 18), Richard is liable to pay the extra $3000 if the house owner George approaches the court and disagrees any wave off agreement. However, in case if Richard can produce any witness of the verbal assurance of George, the payable amount for him may lessen 3.

Thirdly the example of the Uber v Aslam case may be cited. The appeal of the Uber drivers did not stand in front of the employment tribunal. As per this case, the issue of not accepting the pre-booked product may be considered. The issue is that Tom did not sign any purchase clause with Richard. As per the Product liability and safety law it is essential to seal a contract with a buyer at the confirmation of the purchase. Since, this was not done; the court is more likely to reject Richard’s appeal if he rings the court4.

In order to shed light upon the final case the Bolton v Mahadeva [1972] case may be considered. The appellant, in this case, received the contracted value minus the cost of defects. Similarly, in this case, Martin may also appeal that Richard has not kept his words. However, considering the frivolity of the case, the judge may ask the accused and the appellants to solve the dispute among them.

C. Application
In the first case the Contracts Law 1999 and the Sale of Goods act 1979 may be used. As per the section 3 of the Contracts law 1999, the promissory may save her in this case. However, according to the Section 2 of the Contract Law 1999, the third party that is Richard may apply that the liability of this loss lies entirely with the manager Emma. The section 5 and the section 8 of the law may also be applicable. In that case the manager has higher chances of winning this case 6. 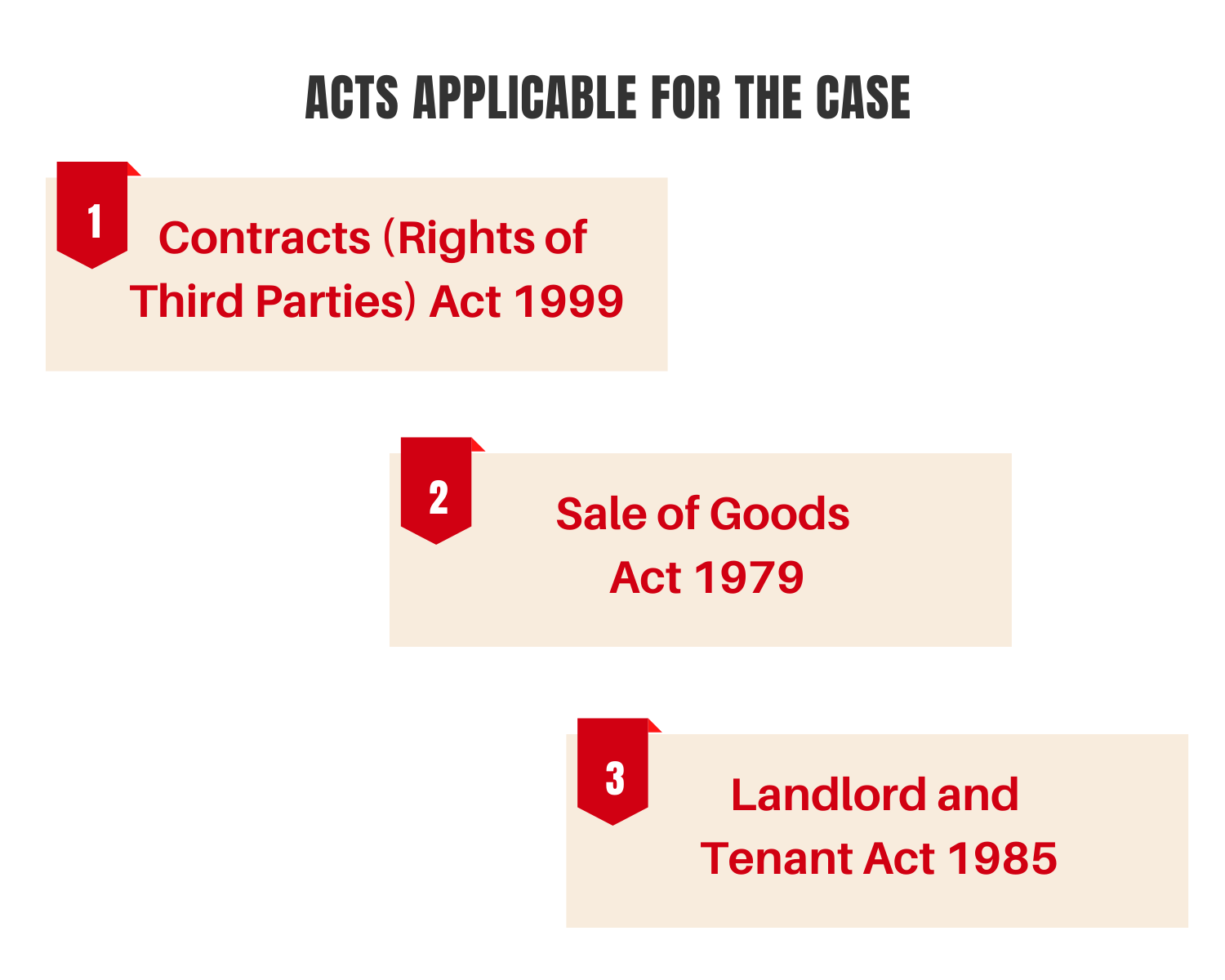 In the second case, as per the Article 3A of the Landlord and Tenant act 1985, Richard should have given a written notice at least to the house owner stating his financial problem. Since no evidence can be produced in favour of the verbal rent waving, the decision of the court is likely to go in the favour of the landowner7 . Thirdly in the case of Tom’s not accepting the act or paying for it, the word of mouth that he had given will not be considered as unconditional assent as per the Contract Law of UK 8. In this situation, the liability of bringing the car at the doorstep of Tom will completely rest with Richard. Finally, in the case of Martin, the verbal offer may also be accepted as a kind of Contract for consumer credit by the judge. In case if Martin appeals to the court, the verbal contract of Richard with Martin may gain ground. However, since this is s petty case, the court may suggest the mitigation of the case by mutual contract9 .

D. Conclusion
This project highlights four issues which come under various law acts under the jurisdictions of the British court. As such, the law acts that are applicable to this case have been highlighted and verdicts of other similar court cases have been analysed also. Under this circumstance, the primary laws that have been applicable are the English Contracts Law, the Sale of Goods Law and the Consumer Protection laws. The possible scenario if these issues were converted to court cases has been discussed in detail. 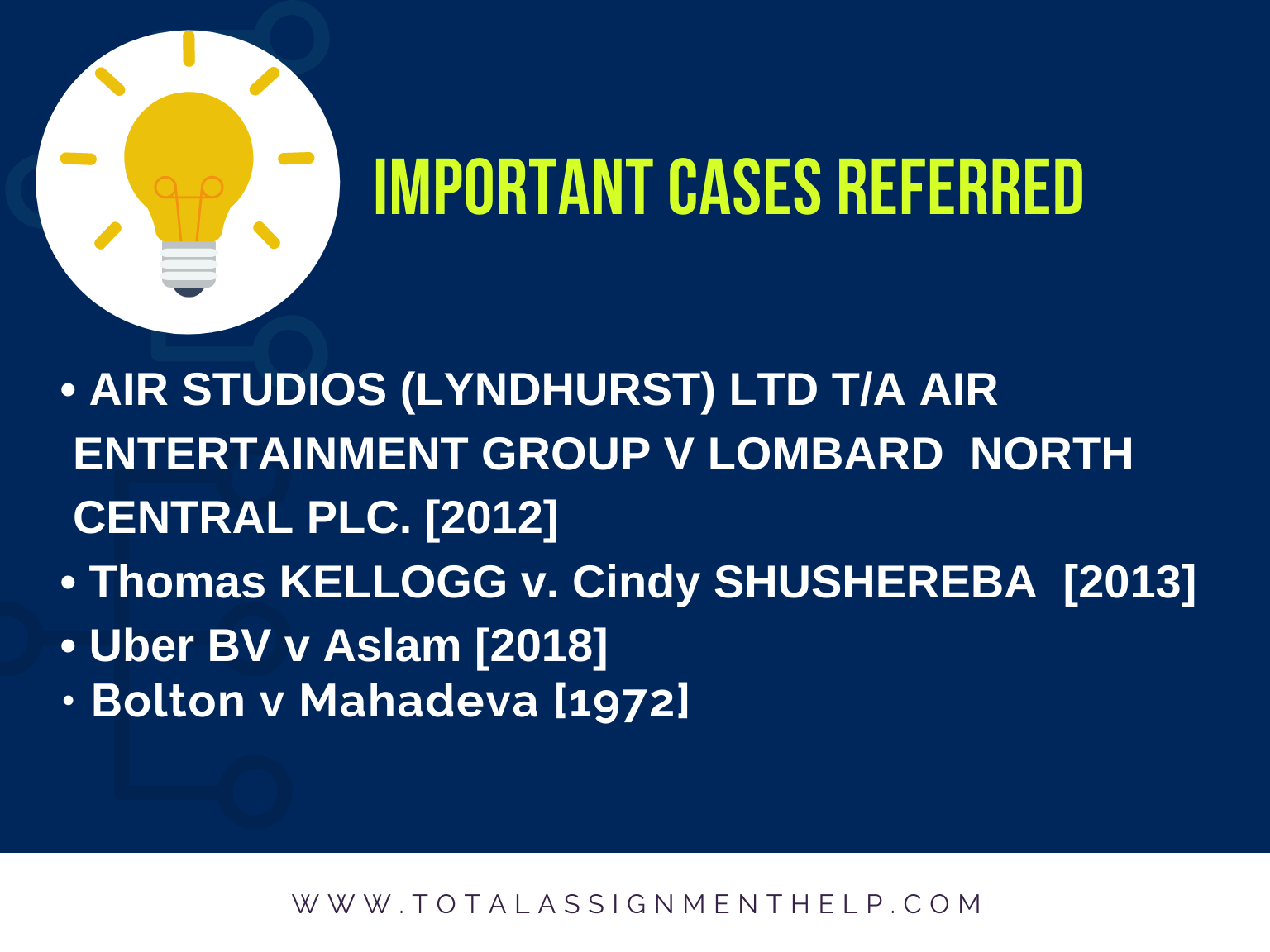