Task: Conduct an in-depth analysis on the concept of complex project management discussing the four main types of project complexities of GRED Project.

1) Discussing the Four main Types of project complexities comes under complex project management
Structural Complexity: This arises due to a large number of tasks with dependency on each other, and most of the activities cannot be completed until the other functions are done. This array of inter-related responsibility needs to be broken down into simpler modules. The assumption behind using the modularity concept is that each component if functions properly will together result in the functioning of the whole system. The modularity concept of complex project management ensures that each module is related to other module with an input and output defined. When each module has its output properly configured, it will automatically result in a success of the complete module. The dependency can then easily be tracked to closure, and relevant steps can be taken to ensure if any module is not working as per the initial plan. Also, the impact of non-functioning of any modules can be pre-defined during the planning phase of a project.

Technical Complexity: In the projects being done for the first time, involve the design of components or use of such technologies which have never been tested before and hence need to be implemented and tested parallels to remove any issues. Some of the elements considered while initiating complex project management approach might be inter-related, and therefore it needs multiple technology teams to communicate and resolve the dependency issues. Other points include criticality of the components and especially those which do not have sturdy designs. The lack of structural integrity of the programs might not fulfil the requirements of stakeholders. The other important aspect of technology is that it keeps updating and we have new updates being received regularly. It is therefore necessary that the technology infrastructure team is aware of such updates and keeps the whole team aware of such updates as and when they arise. The time required for implementation of such updates needs to be baked in the plan in the beginning so that unnecessary delays can be avoided. It is also the responsibility of the project manager to ensure that there is a regular cadence set up with the technology team to take their timely feedback and implement the actions resulting from such feedbacks.

Directional Complexity: When the components in the project do not have an objective to fulfil and are independent, the goal of it gets hidden even of there might be some underlying interests to it. When such ambiguities are encountered in terms of goals and objective fulfilment, it results in directional complexity. This, in turns, makes it difficult to allocate adequate or relevant timeline for completion of that project module. The critical point to remember in removing this complexity is to maintain better politics within the organization and manage relationships to ensure directionality is not lost. This factor of complex project management plays an important role in all the projects. Most of the stakeholders feel they are responsible for completing their own part only and hence they miss the connection and group work required to achieve the overall success. The role of project manager is again important here in the context of complex project management to ensure that all such stakeholders are communicated from their leadership and give due importance to the timelines of other stakeholders. A win for one may not mean a win for the whole project and hence this though should be given priority.

Temporal Complexity: every project has its critical path, bottleneck and constraints in-built. The problem arises when the restrictions are uncertain, which makes it challenging to prepare for handling such limitations. Such uncertainties may have a significant impact on the future existence of the project. The other concerns outlined in the complex project management approach that increase temporal complexity are related to the external environmental factors which can never be controlled and can be strong enough to de-stabilise the complete project. In addition to it, the political scenario within a region or country, civil unrests or protests, natural calamities, incoming of pathbreaking technologies, governmental or legislative changes, etc. all these can be an unexpected turn of events during a project. In a long duration project, it's mostly the external factors which impact the most. The external factors may include catastrophe, unprecedented accidents, natural calamities or disasters which may completely interrupt the schedule and timelines for a project. It is therefore important that we plan for such disasters through a project continuity plan. This plan should ensure that the work goes on in case of any unseen circumstances. These works could include working from an external site and such works which include designs, decisions, testing can be done away from a project site. It is also pertinent that communication during times of such emergencies is properly planned and the key people in the project should be aware of the steps to be taken in case of such external situations arise.

2) Availability of the complexities in GERD project while undertaking complex project management:
Structural complexity: The components of the GRED project include multiple interactions between natural and human systems over a vast geography. It also has the interest of various foreign entities and water acquisition involved. Each of the foreign entity/country need to work together to ensure harmony and equal opportunities and advantages for all other entities. Since each entity can serve as a bottleneck, it is necessary that everyone on the team is listened to. But the case has not been the same for GRED project, and this has resulting in stalking of the project multiple times. Ethiopia, Sudan and Egypt- all these countries are dealing with internal problems of their own and keeping that in mind the foreign ambassadors of all these countries need to act accordingly.

Technical Complexity: Various countries are involved in decisions related to the dam constructions, including Ethiopia, Sudan, Egypt. Also, the initial survey of the dam was done by United States Bureau, and the execution team does not entirely agree with the results of it. The initial survey serves as the basis of the complete project infrastructure, and whenever a project sees complexities, the blame someday would come to the survey. However, blaming the survey would not result in any solution and further delay the project. The correct solution at this point if time is to ensure that the all the countries identify where there is a gap in the survey results. Then each gap obtained from the analysis of complex project management needs to be studied and proper solution needs to be suggested by an expert committee. Once the committee provides its recommendations, it would enable faster moving of the project in right directions. Though the committee process would take up some time initially, but in the longer term it would be beneficial for the project.

Directional Complexity: There is a high level of uncertainty involved in the input and output proportionality of water storage, Sudan does not have enough capability to store the waters, and the variability in the water -flow has predicted to range from 78% decrease to 30% increase making it impossible to predict the future flow. Given this unpredictability, it is highly undesirable to plan water sharing and security in the Nile. The levels of uncertainty are always high in such kinds of project, but this should not be reason to stop the execution. Instead an agreement to be made among the key stakeholders for the actions to be taken in case of different levels of water flow. The range could be divided in multiple sub-ranges and there can be a set of steps that needs to be taken for each of these sub-ranges.

Temporal Complexity under complex project management: There have been hidden interests of countries like Egypt, and they have been reluctant to come to an agreement related to foreign financing of the project. Besides, they have not been able to negotiate the water-sharing agreements about the Nile Basin Initiative. Such hidden interests of the countries need to be carefully handled by a third-party committee which shares the trust of all the countries and has established impartiality to all. This will help ensure that the interests of Brazil are also kept and other countries do not have a new issue when the problems of Egypt are resolved.

3) Identification of Various level of Impact on GRED Project
With the above description of how each of the complexities within the complex project management approach has an impact on completion as well as execution of the GERD project, it is observed that each of the complexity have their share in the total list. However, the uncertainties involved in the project have not only impacted the decision making of the countries but also on the execution side of water storage problems have not been resolved. There have been politics played around these uncertainties, and the involvement of multi countries has to lead to extreme slowness of decision making. Absence of a third party with interest to complete the project and also show the benefits to the affected countries is the current requirement. Directional complexity is playing a major role in this project, followed by temporal complexity.

4) Radar Diagram
Below radar diagram represents the complexity descriptions in terms of a radar chart for a complex project management. The ratings have been provided from 0 to 1 for each of the complexities, based on the analysis for GRED project corresponding to the factors and incidences happening currently in the project. It can be concluded from the radar diagram in regards with complex project management that directional complexity has the major impact on the project. 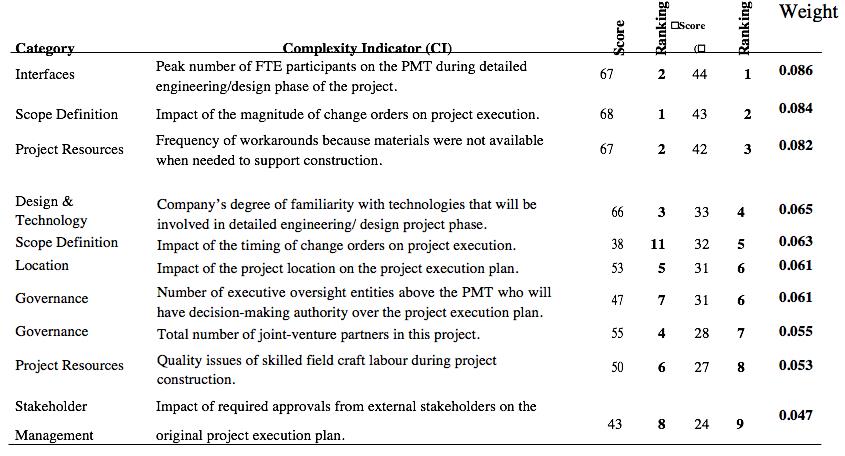