Task: Provide an elaborate analysis of the case of Commercial Bank of Australia Ltd V Amadio.

Introduction
While conducting the mortgage on Amadio, the bank was conscious regarding the insecure pecuniary condition of Amadio’s son and also cognizant about the fact that his parents i.e. the Mr. and Mrs. Amadio has no information about his condition. The bank should have the responsibility to inform Amadio that the bank’s responsibility was not only restrained merely as a sponsor which they failed to do (ACL, n.d.). Because of the following reasons, the court of appeal put in service the findings made by the trial judge in the case of Commercial Bank of Australia Ltd V Amadio.

In this case, the judicial bench had put forward the opinion that the bank had the responsibility to make it clear the original situation of the financial statements of the organization, though the bank was abortive in this task and led the party to be predisposed with Vincenzo’s misrepresentation. It was being observed by the court that the bank had only the knowledge possessed by Mr. Virgo. Since Mr. and Mrs. Amadio was not provided with the related facts and hence it was followed that the bank was responsible for the unacceptable behavior conducted by them.

It was further laid by the judiciary that this event was immoral in characteristics for the reason that the bank had taken unjustifiable advantage of the prevailed circumstances rather than other parties who have a special disability (Law Teacher, n.d.). One of the members in the jury panel, Justice Gibbs opined some excellent instances in the case of commercial bank of Australia V Amadio where the bank held responsible to make clear the situation of the financial statement, which are: -

Two instances in the case which were described by Justice Gibbs, the pivotal point to presume the bank responsible for disclosure:

As per the instances provided above, Justice Gibbs had observed two offenses in this Case:- 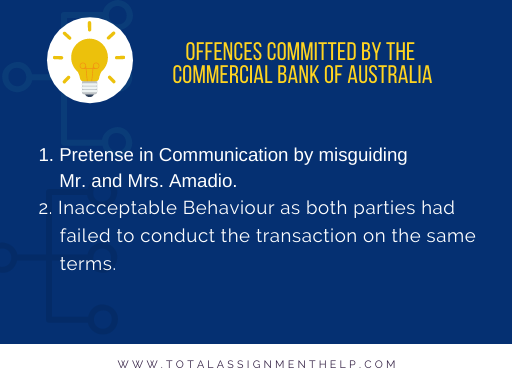 Supporting the judgment made by Justice Dean J in the case Justice mason reiterated that the petitioners had all the right to pursue respite from the defendant since the respondent i.e. the bank, was found culpable and responsible for the unacceptable behavior concerning the implementation of the actions conducted by them. The court had guaranteed the defender that in case any party conducts an unacceptable behavior towards an acquitted person whose will was oppressed and hence made the transaction very constrained and dependent. The will was issued to the acquitted party to exploit their financial condition. Hence, the concerned bank, in this case, is also responsible for the bad conduct, which will provide Mr. and Mrs. Amadio with compensation and relief considering this facet.

In this case Justice Mason further went on by revealing various factors which brought into light the heavy manipulation of the bargaining power in between the two engaged parties i.e. the loan providing bank and the debtor in a way where the petitioner was kept at a situation of disadvantage and misappropriation if the mortgage is conducted in accordance with the terms laid by the bank in the contract. By further evaluation it could be observed that the defendant had shown no effort in understanding the context transaction, the bank had failed to put forward in the document. It was further revealed that the defenders had to face with special disadvantage, which was their reliance and trust on the son who failed to accomplish the requirements laid down in the agreement for his interest.

In the case of commercial bank of Australia v Amadio, Justice Deane had put forward the argument that the relevant and reasonable principles related to the unconscionable act and the unwarranted influence were directly connected and had displayed very strong relations though these principles were poles apart in their ideology. The unwarranted or undue behavior is regarded as the practice in which the weaker party is expected to be waiting for the approval of a superior party. Though the term unconscionable conduct refers to the condition when the stronger party commences an act to obtain and reserve all the benefits while pursuing the task in the contract and inflict possible risks to the weak party, where the task comprises of dealing with good morals and equity. There are many kinds of principles and ideologies about providing compensation to the special disadvantages caused by the indulged party in unfavorable conditions.

Another member in the judiciary bench, Justice Mason elucidates the dissimilarity between the principles of Undue Influence and the Unconscionable conduct by expressing that the circumstance of the party who implemented the undue influence was not a voluntary or deliberate act since it was coerced. While the instance of unconscionable conduct by the party was because of the unfavorable condition, although it was an independent and deliberate act. In this case of Commercial bank of Australia v Amadio, one of the parties had used their position to obtain unconscientious advantage (High Court of Australia, n.d.).

In the Commercial bank of Australia v Amadio, Mr. and Mrs. Amadio was deemed as the weaker party in the agreement signed between the bank and the defendant. It was because of the special disability of Mr. and Mrs. Amadio in doing business with the bank that they were considered as the weak parties. On this ground, the court had allowed compensation and relief against the unconscionable conduct. The bench had also considered many factors while making the jurisdiction like the limitation of the couples in the knowledge of English language, their age, family condition, and the crooked canvassing and marketing strategies of the bank utilized to get the signature. The major and deciding aspect, in this case, was the ignorance of the couples towards the context and the document. The couples had not received any sort of help or aid from any service which is very important before entering into a contract or equity with another party.

Below are given the instances which provided the basis for laying the bank responsible to pay compensation to the defender: - 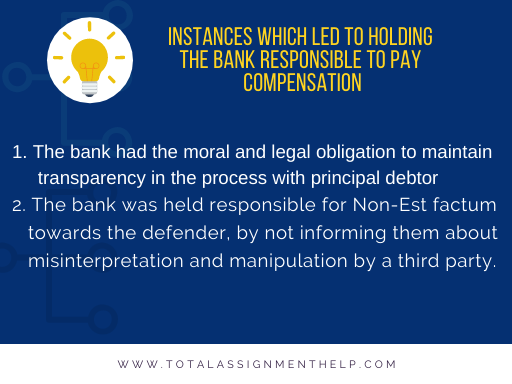