Case Study: Fortescue Metals Group Limited (FMG) is a leading iron ore production and exploration company which operates in the Pilbara region of northern Western Australia. The company is the fourth-largest listed resources company in Australia, behind BHP Billiton Limited, Rio Tinto Limited and Woodside Petroleum Limited, and the largest pure-play iron ore mining company listed in Australia. The company currently has two primary production sites in operation, namely the Chichester Hub located in the Chichester Ranges in the Pilbara region comprising the Cloudbreak and Christmas Creek mining projects, and the Solomon Hub, which is located 120 kilometres west of the Chichester Hub and comprises the Firetail and Kings Valley mines. The company’s current operational objective is to achieve iron ore production of at least 155 million tonnes per annum (Mtpa), and it has undertaken an aggressive expansion program in the last decade in pursuit of this objective. The iron ore produced by the company’s mining operations is transported to their port facilities at Port Hedland and is shipped for spot market or futures contract trading in a number of overseas locations, but predominantly China. Fortescue Metals Group Limited’s largest shareholder is Mr. Andrew Forrest with a 33.32% ownership interest in the company’s ordinary share capital. Andrew Forrest was also the founder and former Chief Executive Officer (CEO) of the company, and is currently the Executive Chairperson of the Board of Directors. There are also a number of other key cornerstone shareholders, including international mining interests and consumers of iron ore resources.

The company’s Board of Directors are seeking input from its Finance Division regarding the future strategic direction of the company. In March 2016, the company announced the signing of a Memorandum of Understanding (MoU) with the Brazil-listed Vale S.A, the world’s largest iron-ore mining company, to blend FMG’s lower grade iron ore with the Vale’s higher grade iron ore at Chinese ports to produce a premium iron ore blend designed to meet the long- term steel requirements of Chinese customers. One part of the MoU involved Vale S.A purchasing up to a 15% ownership interest in FMG on the sharemarket. However, updates in December 2016 suggested that this joint venture is unlikely to be operationalised any time in the near future. FMG is also in early stage discussions with Hancock Prospecting Pty. Ltd, in relation to taking an ownership interest in the newly-operationalised Roy Hill 1 iron ore project located in the Chichester Ranges area of the Pilbara near one of its current operations. This would potentially involve the purchase of up to a 25% share in the project, and the provision of access to its refining and railway infrastructure. Based on current financing arrangements and indicative valuations for the Roy Hill 1 project, the cost of purchasing this project share would be approximately $2.6 billion.

The follow table provides a summary of financial and structural information for Fortescue Metals Group Limited for their recent June 30th year ends (All figures, except for per share, issued capital and percentage statistics, are expressed in A$Million): 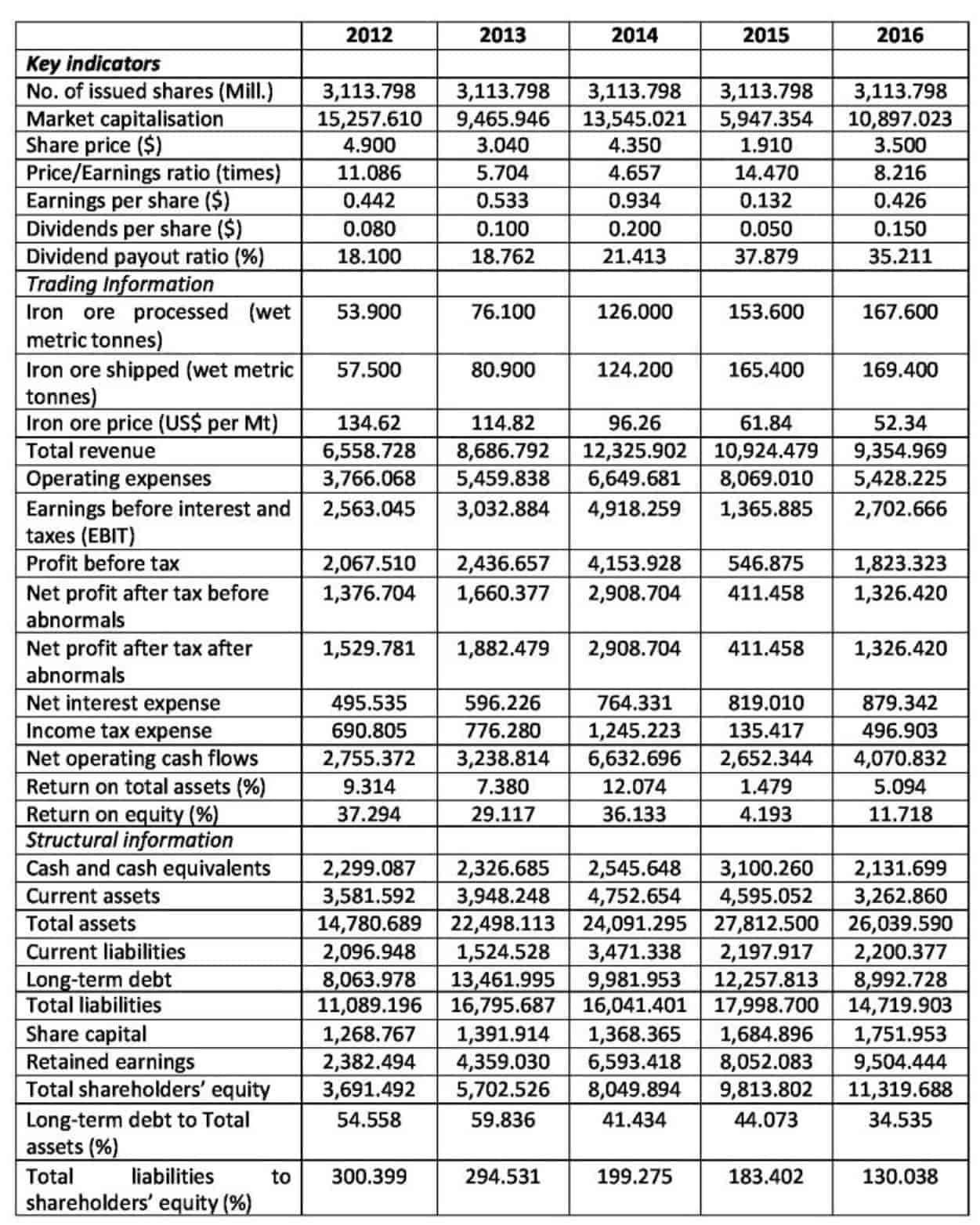 The following table provides financial and operational information for a number of leading international mining and resources companies based on current market capitalisation levels and 2016 annual report information (figures in $Million, except for iron ore production, which is in Million metric tonnes):

Note that Vale S.A and Cliffs Natural Resources Inc. are pure-play iron ore mining firms, whereas BHP Billiton Limited and Rio Tinto Limited are diversified mining companies and iron ore mining is only a part of their overall mining activities.

The Director of the Business Development Division of Fortescue Metals Group Limited, Mr Peter Lynch, has requested you to prepare an analysis and options report regarding the company, which will be used as an important input into the Board’s future strategic decision-making. The report is required to include the following components:

The due date for submission of this Case Study task is provided in the subject learning guide and on the subject LMS site. This Case Study will represent 30% of the final assessment for this subject and is to be submitted using the upload facility provided on the subject LMS site. This Case Study is an individual assessment task, and should be a maximum of 1,500 words, excluding any calculations, tables or other exhibits. The Case Study should be prepared in a professional manner and include informative and logical information to justify any decision-making and recommendation conclusions drawn. Relevant calculations employed should be fully explained and be understandable and interpretable by the reader, and any important assumptions made should be clearly stated. Any resources used, besides the Fortescue Metals Group Limited 2016, and prior year, annual report documents, should be appropriately identified and referenced.

Executive Summary: The report discusses the business activities of FMG. It discusses the industry in which it operates and its performance over the past few years. The areas of risks have been identified and their potential impacts have been also assessed. The weighted average cost of capital of the company has been calculated. The valuation of the company has been done using the dividend discount model and peer comparison to compare it with the current market capitalization and identify the differences. Lastly, funding decision for a new project has been also recommended keeping in mind the current financial position of the company and the viability of the sources available for finance.

Analysis of Company and Industry Performance: The company is involved in the business of production and exploration of iron-ore in the northern region of Australia. The company is the fourth-largest resources company in the country and has two production sites.

The other important parameters of the company like mining, processing and shipments have witnessed an increase for the past five years. It implies that the business of the company in terms of volume has increased in these years even if the amount of revenue earned has reduced.

Risk Assessment:The risk to which a company is exposed comprises of both the internal and external factors. We have conducted a SWOT Analysis in the given case to understand the strengths and weaknesses of the company and then relate it to the involved risks.

Strengths – The Company is one of the pioneers in the industry. The company operates in north Western Australia where major of the iron ore is mined. The company has formed various committees to ensure efficient operations like risk management committee, taxation committee, employee safety committee.

Opportunities – The Company has been sufficient cash reserves therefore, it can consider investing in different ventures. The company has been in the industry for long and is a well-known entity therefore, it would have the benefit of brand image in the instances of acquisition and it would provide the company with a competitive edge. The company can consider investing in the ventures that would help in adding higher value to its company. For instance, if the company invests in ventures from which it is able to convert its low grade products into superior products it can sell them at a premium price and it would generate value for the company.

Threats – The Company is involved in the industry where employee safety is given vital importance. It has to ensure that slavery is not practiced in any of the concerns which are in the supply chain of the company. Therefore, if instances of slavery are identified it would pose a threat to the company. The company supplies major of its extracts currently to China. If the demand of iron-ore decreases in China it would impact the business of the company.

From the SWOT Analysis, it can be stated that the iron-ore industry is currently witnessing a reduction in oil prices which has to be compensated by curtailing the cost and increasing the volume of sale. The company has adopted both these measures. However, the company has to ensure that the safety of the workers is adequately met even with curtailed expenses otherwise it might have an adverse impact on the brand image of the company. It has to also ensure that the slavery is not practiced across the supply chain. Therefore, even after reducing the expenses it cannot curtail its expenditure related to these factors to a great extent. 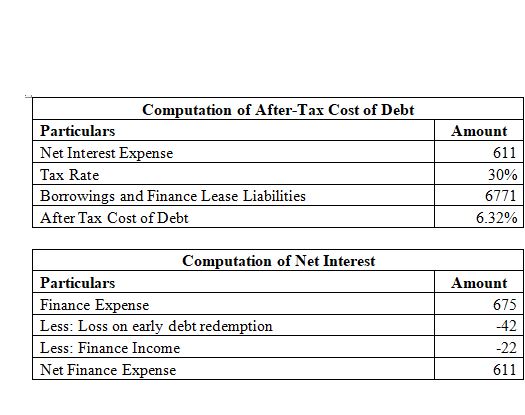 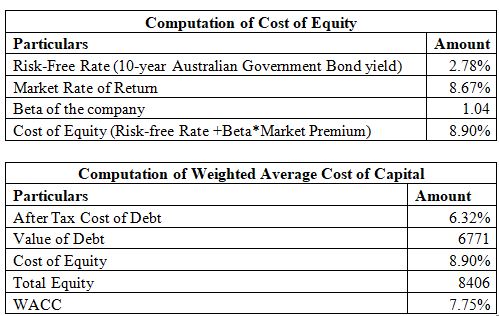 Note: The interest expense including the finance lease cost was provided together in the notes to the financial statements therefore, they have been considered as a whole for the computation of the after-tax cost of debt.

Company Valuation: The company has been valued according to the various methods to compare the theoretical valuation of the company with the current market valuation.

The growth of the dividends has remained in the past few years. The market is even witnessing oversupply of the iron-ore. Therefore, keeping in mind the above factors the perpetual growth of the company has been estimated at 5%.

Peer Comparison:For the peer comparison we have only considered Vale S.A and Cliffs Natural Resources Inc. have been considered as they are involved only in the business of iron-ore mining. 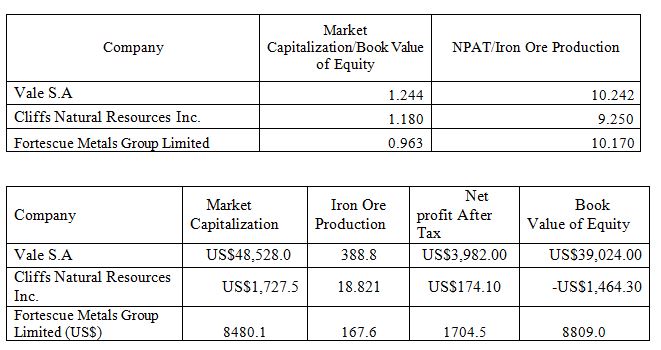 If the valuation as per Dividend Discount Model is observed, we can assess that the market share price of the company is less as compared to the share price that has been obtained by the application of Dividend Discount Model. One of the factors for such difference might be difference in the growth rate that has been applied in the given case as compared to the growth rate that is perceived by the market.

Funding Decision:The company is considering funding the Roy Hill 1 Project. In the current scenario, the company can consider financing a mix of debt and equity. The iron-ore prices are declining currently therefore the margins of the future years are uncertain. If the entire funding is made through debt, it will increase the financial commitments by the interest amount. The cost of equity is higher than the cost of debt. However, the equity is currently under-valued in the market. Therefore, the company would be able to procure funds from equity at a lower price. In this manner, the company would be able to utilize all the available benefits in a balanced manner and funding the project through debt and equity mix would generate optimum benefit.

Conclusion: The company is performing well and has the potential to cater to the current requirements of the company. It also has the potential to change its course in changing environment like curtailing costs in the instance of reduction in the iron-ore prices. However, the future of the industry and company depends upon the demand and supply of iron-ore in future. Since the company only deals in iron-ore products the economic impact on the product would have a direct impact on its revenue and margins.