Introduction
The concept of ethnicity pay gap explored in the sections of business research assignment is defined as the difference between the average pay rate for the different ethical groups on an hourly basis. Ethnicity is considered to be the broader term than that of race and is the categorization of the people on the basis of the culture they are expressed by them. There is no legal requirement for the business to publish their ethnicity pay gap, but as per the recent report published by the Commission for Race and the Ethnic Disparity, it has been stated that the practices of ethnicity pay gap remain voluntary due to the existences of the lack of diversity in catkin areas. In this report, aims are taken to evaluate the quantitative data to portray the ethnic pay gap that exists in England in a vivid manner.

Research problem
In England, the ethnicity pay gap between the Ethnic minority and the White Employees has been a major business issue. However, pay gaps between the different existing ethnicpay gaps have narrowed down in recent years, more evident after 2012 (Ons.gov.uk, 2021). It is evident the majorminorityethnicgroup employees are earning less than the White in the company’s operating within England. In the year 2019, ethnicgroups such as the Chinese, White Asians as well as Irish earned more in England than British majority ethnic group. In entire England, it has been evident that the highest ethnic pay is in London, and the smallest differences prevailed in Whales. In London, the difference in ethnic pay gap was 23.8% in the year, and it was 1.4% in Whales in the year 2019 (Ons.gov.uk, 2021). As per the UK's Commission on Race as well as Disparity started that the institutional racism is determined to be a factor that is contributing to the pay disparity among the different ethnic groups. However, as highlighted in the report, outright racism is still an existing issue in business in England. As per England’s National Health Services, the business needs to narrow down the ethnic pay gaps so that the disparity at the workplace can be gained (Theguardian.com, 2021). This is essential in building a feeling of becomingness among the employees from the minor ethicgrows. Pay gaps on the basis of ethnicity in England is reported to be the structural barrier that is effective in limiting the opportunities for the ethical minority groups (Atkinsonet al.,2018). In recent years, the companies have been tending to adopt internal approaches and are executing communication campaigns to execute the ethnic information's. It is a must for the companies to achieve inclusivity with the reduction in the ethnicity pay gap (Theguardian.com, 2021). It is effective in fetching an equal opportunity to earn livelihood to all the employees despite their ethnic group.

In the opinion ofRodgers (2019), the pay gap as per the ethic group is yet another controversial payment disparity is that affective the equal employment opportunity for the workers. Although the practices are complexly voluntary by the institute, but the existence of any such unethical payment measures are creating a distinction within the workplaces and are reflected in the services executed by the companies (Auspurg et al., 2017). The pay differences are mainly on the basis of the cultural group and are determined to be very complex in nature. As per the norms of the ethnic pays gap, the employees belonging to the ethnic minority tend to earn less than that of the ethnic majority groups, such as British men in the UK. On the other hand, Longhi and Brynin (2017) commented that the proper address to the ethnic pay gaps is needed so that stability in the work environment can be fetched. It reduction in the ethnic pay gap is productive in encouraging diversity in the working environment. It is reflected in his findings that the pay gap on the basis of the ethnic group is reducing the opportunities of the talented ethnic minority. The execution of strategic measures like equal payment to all is essential in developing better growthopportunities for the people having talent irrespective of their ethical group (El Masriand Suliman, 2019).

On the contradiction, Gopalan (2019) was in the opinion that the pay gaps vary on the basisof whether the ethical minority group has been in the UK or inabroad. It is also evident that the pay gap between the male and females among different ethnic group also varies. This shows the poor status of the females in the working environment in almost all ethical groups (Friedman et al. 2017). The gaps within the pay scale of the similar work are developing a feeling of distinction among the staff, and they are unable to work as a team. The feeling of belongings is affected, and the business is unable to gain workplace prosperity in with the biased payment system. Atkinson et al.(2018) advocated the equal pay portal. It is essential in recent times to develop standards pay system for all. The disparate payments are not ethical in nature, and it is considered being a huge drawback to the progressive society (Tringale et al. 2017). It promotes discrimination and acts as a constraint to business success. The business is willing to expand its branches in international markets, and thus employment from different racial groups is essential in promoting diversity in the work culture. Thus, the reduction in the issues like the ethnic pay gaps that still exist in the business is needed so that equal opportunity is promoted to employment and they are able to fetch payment on the basis of their knowledge and expertise and not due to their ethnic groups

Databases
The use of the secondary quantitative data is taken into account for the demonstration of the Ethnic pay gap in the business of England. The data are extracted from authentic sites like the Office of National Statistics are taken into consideration so that the facts are productive in reflecting the true facts and evidence. The use of the recent data is used along with the explorative research designs. Applying the methodology of the thematic data analysis, the different graphs and charts are demonstrated using proper arguments (Nowell et al., 2017). The reflection of the gaps and tables are done so that the best idea about the prevailing ethnic pay gaps in England can be inspected, and thus the business issues can be reflected in a coherent manner.

Quantitative data analysis
1. Differences in the pay gap from 2012 to 2019 between the ethnic minority groups and While people in England 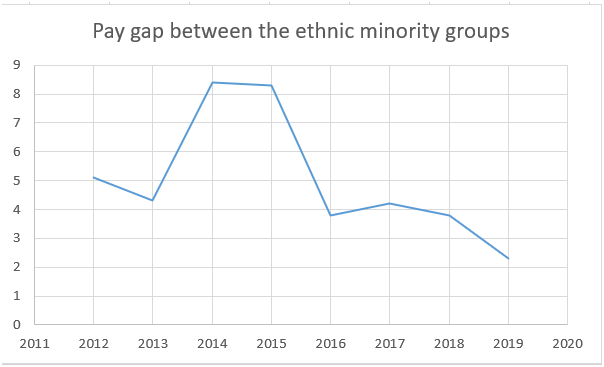 Figure 1: Differences in the pay gap between the ethnic minority groups and While people in England
(Source: Ons.gov.uk, 2021)

As evident from the above graph, the reduction of the ethnic pay gapsbetween the whites and the other minoritygroup has been evident since the last decade (Liand Heath, 2020). It is evident the gap was high between 2014 and 2016. However, the progressivethinking in the business has hampered the business measures in the country, and thus actions were taken to reduce the ethnic pay gaps that were creating a disparity in the working environment (Burris et al., 2019). At some time,the pay gapsremained 2.3% in the year 2019, which is likely to reduce in recent years as well. The higher ethnic pay gap indicates that the business is not encouraging work pace diversity and its rights in theirdecision-making process showingbiased business approaches (Cletus et al.,2018).

2.Pay gap among the ethnic groups in England 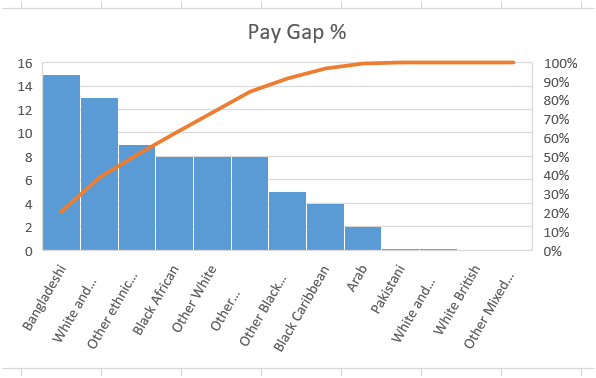 The disparity in the pay scale among the different existing ethical groups in England is evident (Beech et al., 019). The above growth vividly describes the 17 different ethical groups that are evident in England and, at the same time, outlines the pay gaps that are evident, respectively. In the context of the Asian, that pay gap is around 8% on the other hand, 15% for the Africans. This shows that the British are not willing to pay much to the minority ethical group, and thus the existences of the gap in pay scale are evident. On the other hand, the graph is effective in portraying that the negative difference in the pay scales for the ethnicgroups such as the Indian, Chinese, and Irish are evident. It has been thus evident that the Indian, Chineseand Irish ethnic are considered to be productive in Englandandthus are even played more than the native British as they are contributing benefits to the business in an effective manner (Jones et al., 2019). 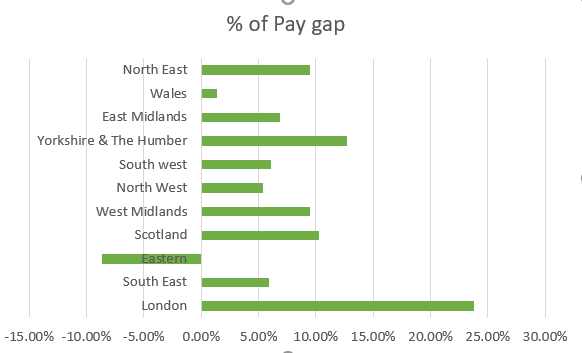 The above growth is effective in reflecting the fact that the ethnicgroups and their payments differences vary from one location to the others. The abovegraph demonstrates the differentlocations of England, and it has been evident that London is having the highest Ethnic Payment gaps. It is around 23.8% among the White and the other minority groups. On the other hand, In the case of Wales, it is the least and is recorded to be 1.4%. The growth has been effective in highlighting the fact that in the context of Scotland, the ethnic pay graphs of 10.3% is evident. These valuesreflect the fact that the business operating in London is not much concerned about workplace diversity (Fine et al., 2020). thus, the companies are not willing to develop measures in promoting equal payment opportunism to its employees, leading to the restriction of the execution of the seamless service.

4. Gender wise pay gap in ethnic groups in England in 2019

The female's gender is determined to be vulnerable in almost all ethnic groups (O’Reilly et al., 2017). This graph seeks to reflect the vulnerability of the females in all the 17 ethical groups that are evident in England. Ethical groups like the Chinese, Indians, as well as White British have a wider gap in the pay scales between male and female employees. This has been helpful in showcasing the poor status of the females and the lack of opportunities they have to secure a better future in the competitive environment (Sunindijoand Kamardeen, 2017). It has been thus helpful in fetching the fact that the development of the women status is a must so that the women get proper opportunity to grow in the competitive business environment (Auspurg et al., 2017).

Findings
The quantities data from the authentic sites have been helpful in developing the idea about the exiting ethnic payments gaps in the business operating in England. The facts have been helpful in showcasing the idea that the business needs to narrow the pay gaps and seeks to adopt equal payments measures to all the employees on the basis of their experiences, and the factors like ethnicity and gender should not be considered by the business while deciding pay scales (Carberryand Meyers, 2017). The region-wise difference shows that the locations like London are one of the prime locations for international businesses, and it does not promote workplace diversity (Ons.gov.uk, 2021). Longhiand Brynin(2017) mentioned that the employees in the location having better growth prospects with excellent workplace diversity is helpful in fetching a better success rate of the employees in developing business profits. On the other hand, the companies promoting ethnic pay gaps are not providing equal opportunities to all employees (Hunt et al., 2020). These circumstances are acting as the barrier for the employees belonging to the minority ethnic group.

Conclusion
It can be concluded from the above discussion that the ethnic pay gaps that exist between the different minority groups in England is affecting the business evident and might lead to poor work cultures. The growth prospect for the minority is very few minutes. On the other hand, the ethical groups like Indian, Chinese as well have Irish are liked and are different better opportunities than the major ethnic group, the British. This reflects that the hardworking ethnic groups are appreciated by the business and are paid higher than the rest. It is considered as the asset to the business irrespective of their ethnicbelief.The measures of the equal pay would help the business to encourage workplace diversity.