Problem statement: According to Centers for Disease Control and Prevention (2011), around 27.8% young generation in the country stated that they are drinking one or more soft drink or Sugar-sweetened beverages per day. Based on the study, it is founded that there is high percentage of soft drinks consumption among the youth. People taking Sugar-sweetened beverages are not getting nutrients values they need. The utilization of Sugar-sweetened beverages is leading to obesity and various health problems which are straining the health care resources. According to Riddell, Campbell and Nowson (2013), children with 2 to 16 year old are consuming more than one SBB on daily basis are likely to be overweight.

Research questions
RQ1: What is the impact of daily consumption Sugar-sweetened beverages on the human body?

RQ2: Are consumer aware about the health issues by the use of Sugar-sweetened beverages?

Justification of the project : This study would be beneficial in analyzing the high frequency of Sugar-sweetened beverages among children, adolescence and adults. The study would be useful in analyzing various effects of the use of soft drinks and beverages on human body. There is the limited research on the utilization of Sugar-sweetened beverages in various groups of Australian people. This research will provide an enhanced perceptive of the impact of sugar beverages on the human body. By reviewing various articles, it can be observed that various authors have focused on how the daily consumption of Sugar-sweetened beverages impact on the human body (Alvarenga et al, 2011). All the research questions identified in this proposal will be answered on the basis of data collection, analysis and findings. Further, the results of the research will be considered as the significant academic work for the research problem. Along with this, the research will also be beneficial for the end users.

Conceptual framework: The processed foods and beverages include high added sugars and low level of vitamins and minerals. Beverages with high added sugars may replace more nutritious food and beverages and make it complex for people to get appropriate energy. The dietary sugar may lead to overconsumption of energy which is the cause of various diseases and have negative impact on the health. Due to added sugar beverages, people are replacing healthier food items like yoghurt, breakfast cereal and flavored milk. Soft drinks are the major discretionary beverages consumed by the people in Australia and it can be seen that there are chronic disease and weight problems in the society. Various national health agencies like UK National Institute for health and clinical excellence, US Centers for Disease Control and Prevention, The Australian National Health and Medical Research and Council and Health Canada recommended that there must be limit for intake of Sugar-sweetened beverages (Woolsey, 2010). Further, it is also not clear what quantity of the entire energy derivative from Sugar-sweetened beverages within the healthy diet. There are sustainable proofs that soft drinks are the cause of weight gain, poor dental health fatness, hazard of high illness and diabetes (Vartanian, Schwartz & Brownell, 2007).

Obesity: It is the evidence that high intakes of soft drinks are the cause of body weight and fatness in children as well as adults. According to World Health organization, people are using artificial or extra sugars in their diet, tend to gain weight. It is anticipated that Sugar-sweetened beverages are the reason for at least one-fifth of weight gained of the population of the country (Bray, 2009).

Reduced nourishment : Most of the Sugar-sweetened beverages include high calories and it means that they do not have nourishment characteristics. Further, it is also observed that Sugar-sweetened beverages are replacing the healthier food items. People taking Sugar-sweetened beverages are not getting nutrients values they need. For instance, high level of drinking of beverages includes lower level of minerals, vitamins and nutritional fiber, for the children, soft drink is replacing milk and includes poor ingestion of protein, magnesium, calcium and Vitamin A that can have significant effect on the health and growth of the children (Badjou, Iacobone, Peterson & Matinuzzi, 2012). The soft drinks products have no any nutritious values and due to overconsumption, the lead to the risk of unhealthy weight gains and dental diseases.

Tooth erosion and Dental crisis : Evidences from various health organizations reveal that Sugar-sweetened beverages i.e. soft drinks and sports drinks include high acidity can be the cause of dental problems as well as tooth decay. A study done on 16500 Australian school children revealed that children have dental disease in deciduous and permanent teeth due to high utilization of sugar sweetened beverages. According to Australian Dental association, there is high intensity of sweetener in soft drinks, diet soft drinks and sports drinks that are the cause of acidity (Mergen & Dehdari, 2011).

Other health issues: People who are consuming Sugar-sweetened beverages have various health issues like high risk of diabetes, various chronic conditions like high blood pressure, cardiovascular illness, and metabolic syndrome and bone fractures, low bone density and osteoporosis etc. Further, some of the Sugar-sweetened beverages have caffeine and this creates more health issues. Caffeine is the cause of kidney stone in adults and anxiety in young people (Ramstad, 2010). 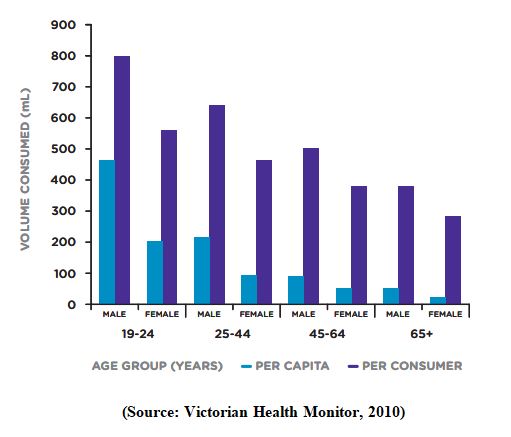 Utilization of Soft drinks by children
There are various national and state surveys available on the children’s diet. According to Australian national Children’s Nutrition and Physical Activity Survey, sugar sweetened beverages make a major part to the ingestion of children. Along with this, almost half of the survey children are consuming fruit juice. As they are growing older, they like to sports drinks and soft drinks (Duffey & Popkin, 2006). One third of children over the age of 9 are drinking sugar sweetened beverages. Children having age of 16 to 18 years are drinking energy drinks regularly and children having age of 14 to 16 are drinking sports drinks. So, overall consumption of the soft drinks is rising continuously with the age (Malik, Schulze & Hu, 2006). 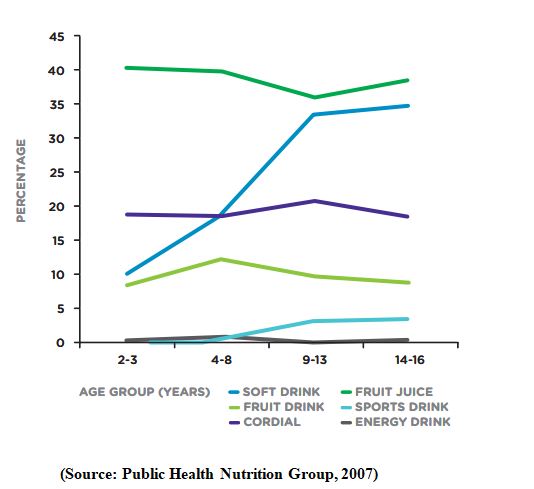 Trends in Utilization of Soft drinks
The available data suggests that there is small level of decrease in the use of Sugar-sweetened beverages recently. It is revealed that women are taking 2 cups per week of soft drinks and sports drinks. It is also observed that children who are consuming soft drinks on daily basis may face growing health issues (Gunja & Brown, 2012). The dietary sugar may lead to overconsumption of energy which is the cause of various diseases and have negative impact on the health. Consumption of soft drinks by men and women per week is given in the graph. 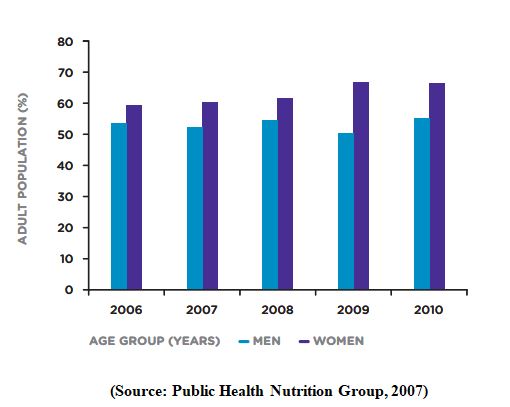 Based on the above discussion, it is observed that Sugar-sweetened beverage is any beverages with added sugar or sucrose have significant impact on the health of the humans. Soft drinks and beverages comprise of drinks with extra or artificial sugar like fruit drinks, soda and energy drinks are now frequently consumed by adults and children in the society (Pereira, 2003). So, this report focuses on the impact on sugar on the human body in terms of sugar-sweetened beverage. Soft drinks are the major discretionary beverages consumed by the people in Australia and it can be seen that there are chronic disease and weight problems in the society. Further, it is observed that there are sustainable proofs that Sugar-sweetened beverages are connected with weight increase, obesity, high threat of illness and diabetes and dental problems. So, there is the need to decrease the utilization of Sugar-sweetened beverages in order prevent the individuals from disease (Tedstone, Targett & Allen, 2015).

Hypothesis development: There are following hypothesis for this research:

Methodology
Research approach and sources of data:Quantitative research methodology is used in this study. In this research project, data collection is one of the most significant parts so it is very crucial to select the right method for the data collection process. In order to conduct this research effectively, it is important to identify the people who are consuming Sugar-sweetened beverages on regular basis. This data will be collected from the school, colleges and offices in the country. For this purpose, a questionnaire including two sections will be used for the data collection. First part of the questionnaire would include the questions associated to demographic distinctiveness and second part will comprise the questions associated to amount of carbonated drinks used by the respondents. The reliability of the questionnaire will be analyzed by using re-test and its validity will be assessed by the measurement of content validity. After explaining the objectives of the study to the participants by the researchers, if any participant wants to decline to complete the questionnaire then he would be eliminated from the study.

Proposed data collection and analysis technique
Population and sampling: The target population for this study would be students and office employees from the universities, colleges and offices in Australia. Around 200 people would be selection as the sample size for the research.

Variables and analysis: The objective of this study is to analyze the consumption of sugar-sweetened beverage by the populace of youth and adults and analyze the potential impact of sugar-sweetened beverage on the human body. One way examination of the variance would be used to study the difference among various groups in terms of amount of drink consumption for quantitative demographic variables and amount of weekly drink consumption for qualitative variable.

Organization of the research: This particular research will include following structure:

Project budget and budget justification
The overall budget for this specific study is $5000 for completing the project within the given time frame (01/06/18) mentioned in the Gantt chart. There are following reasons for the need of this budget: 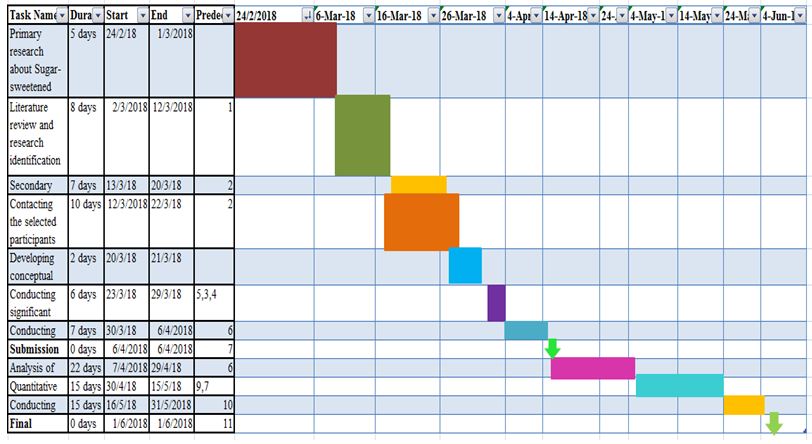