Biology Assignment: A Scientific Paper on Outbreak of Vibrio Cholerae

Task: Write a reflective journal on computer architecture assignment analysing the theoretical concepts captured from the weekly material.Biology Assignment Instructions: Write a scientific paper on topic vibrio cholerae. Please references should be from well-known sites like CDC, WHO and so on. Also on the introduction section talk a little about recent outbreaks of vibrio cholerae.

Introduction
The disease cholera is caused by the ingestion of contaminated water. To date, there have been seven deadlyoutbreaks of cholera around the world. However, the South Asian part is considered the home for cholera and from here onwards it has spread to other parts of the globe. According to an estimation and survey conducted by the WHO, an estimate of about 3.5 million people get infected with the bacteria and an average ranging from 1 to 1.20 lakh people succumb to the disease in developing countries. On a range of ten worst pandemics in the world, cholera is ranked sixth in terms of severity. The countries with the poorest sanitation facilities and worst water distribution systems are the most badly affected by the disease and the case fatality rate is comparatively high from other countries. Recent outbreaks of this disease were reported in continents like Asia, Africa, and the Americas. According to reports from the UNICEF, Haiti reported cholera cases in 2019. The African and Asian continent however reported more cases of this pathogen with Cameroon reporting 1952 cases and 87 deaths. There are presently four active cholera zones in the country. Congo is the worst affected country in Africa with a total of 18504 cases including 301 fatalities as of 5th December 2020. Other affected countries are Nigeria and Somalia. Bangladesh in Asia recorded 191057 cases of cholera were reported for the entire year of 2019. 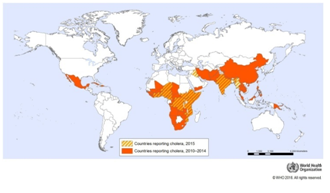 Materials and methods
Several precautions should be followed by travelers who are traveling to countries that are exposed to the pathogen. Vaccination is generally not required for travelers but they should strictly follow hygienic practices like washing hands with soap and water, washing fruits and vegetables thoroughly. As per the guidelines of WHO, travelers of the higher risk groups like the emergency and relief health workers should be vaccinated at the earliest to prevent exposure to the pathogen and contracting infection. Travelers traveling to high-risk zones should seek advice from health experts and other medical professionals to apply proper precautionary measures. Drinking water is an area of utmost concern for travelers and they should drink bottled water or water treated with chlorine(Kumar, Sinha and Sharma, 2016).These methods can significantly reduce the risk of transmission of cholera for travelers and other people who are traveling to high-risk areas. People traveling to coastal areas should be extra cautious and they should not consume raw seafood products and focus on eating properly cooked food.

Vibrio Cholerae is considered a facultative pathogen that resides in aquatic ecosystems. It generally produces toxins that are released in the human small intestine and result in watery diarrhea(CDC, 2018).Cholera usually has two patterns: one is an endemic with periodic cases and partial outbreaks and an endemic disease with a high rise and fall of cases that last for many months. Small-scale transmission generally happens in houses through food, water, and large-scale transmissions occur from impure water bodies. Numerous environmental and biological variables are responsible for the transmission of cholera that can be attributed to seasonal drivers, immunity of the host, and infectiousness of the bacteria. Acquired immunity from the pathogen is usually long-lived as both dead cell and live vaccines have been developed in the recent past but the efficacy and formulation can be altered or improved for better results(Okada et al., 2018). The pathogen usually carries a multifactorial and transient approach to infection. 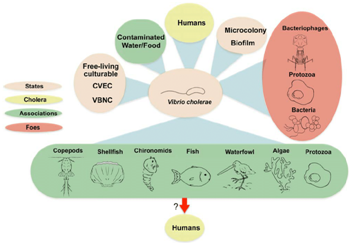 Data collection is a process that is used to collect sample data for testing purposes. It is the most convenient method for conducting tests for the presence of cholera bacteria in drinking and other sources of water that are used in households. It provides a comprehensive analysis of the percentage of contaminated water and the noncontaminated one. Conventional methods for isolating V.Cholerae from contaminated water are dependent on plating on selective media and then a confirmation using a series of biochemical tests known as PCR to determine the serotype of the strain. If adequate supplies of PCR reagents are available then biochemical tests can be bypassed and PCR tests can be directly conducted. An adequate concentration of samples is required in cases of most water planktons and other sources(CDC, 2018). The environmental sources are not static in terms of density and so volumes may display different results as the concentration of bacteria may vary accordingly. In this case, multiple methods should be adopted by the investigator to isolate, detect and characterize the amount or the nature of the pathogens residing in water bodies. To address this inconsistency the investigator should use both whole water and plankton-free water for experimenting. Both types of water should be filtrated using a 0.2 um polycarbonate membrane filter. The three most commonly used selective methods for isolation of Vibrio Cholerae are thiosulphate citrate bile salts sucrose (TCBS), tellurite taurocholate gelatin agar (TTGA), and CHROmagar.

Results
The basic protocol is used to isolate the antigen from the contaminated water bodies. The results will bring out the volume of bacteria present in the water samples and the degree of damage it can cause can be calculated. In terms of the presence of bacteria in the human body as a host, the most convenient way of conducting a test for tracking the presence of bacteria in the bloodstream is the use of rapid diagnostic tests. It is considered the most simple and reliable as well as effective way of diagnosing. The rapid tests need the least laboratory infrastructure, reducedtime, and fundamental scientific skills in comparison to routine culture tests(Thomas et al., 2018)During the situations of an outbreak, rapid tests provide a quick and effective way of detecting the presence of bacteria in the human body. It assures fast treatment options for patients with a severe condition. However, the structure, efficacy, and detection modes of rapid diagnostic kits differ from region to region. The results are much quicker as compared to the culture serotypes and thus they provide faster results in terms of emergency. Although,the bacterial load on the human body is better detected in conventional tests rapid tests are the most widely used tests globally. 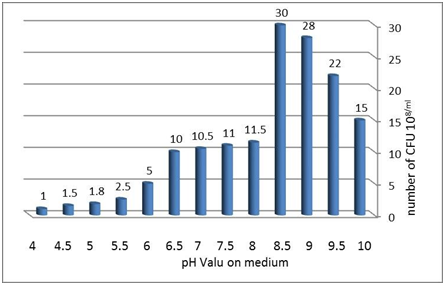 The presence of bacteria is prevalent in high-risk countries like Bangladesh. In a case study of the prevalence of cholera as an epidemic in Bangladesh, a total of around 1500 water samples were collected. Out of these 1500 samples about 1100 samples were collected from point of drinking water source and the rest from other sources. Most of the households used mugs, glasses, or bottles for drinking water. 24% of the 1500 samples used treated water and a majority of the remaining ratio used boiling as a means of water purification. After the isolation of bacteria around 10% of cholera bacteria were detected in the point of drinking water samples and 9% was detected in other sourced water samples. Repeat visits that comprised of 6-week intervals resulted in an average of 23% of household drinking water and 38% of source water also tested positive for the bacteria(World Health Organization: WHO, 2019). The overall percentage of positive bacterial strains was significantly higher in the points sourced as drinking water as compared to water from other sources. The source of drinking water that is adjacent to a water body is susceptible to the presence of bacteria than sources that are far away from water bodies. This is a tendency that is predominantly seen in areas of Bangladesh where cholera bacteria are prevalent.

Discussion
As it has been seen that the cholera bacteria can cause widespread damage to human life and society is extremely essential to control the transmission of the bacteria and reduce fatality rates. A multi-faceted approach is needed to curb the spread of the disease that includes sanitation, hygiene, water treatment, oral cholera vaccines, and proper surveillance. Surveillance is one of the most important approaches that can be used to curb the spread of the disease. Local-level feedback and global-level information sharing are the two most important aspects of a strong surveillance system. Countries that are affected by cholera especially the Asian subcontinent countries should be encouraged to strengthen the disease surveillance and rapidly detect and respond to outbreaks(World Health Organization: WHO, 2019).Notifications of all cholera cases are not mandatory according to the International Health Regulations. However, the official need for notification must be assessed by the governing body for public health events regarding cholera. 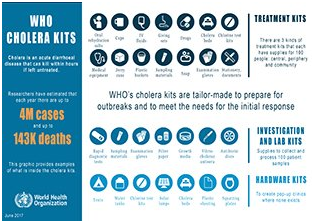 Water and sanitation intervention is required at the primary level. The long-term solution for controlling cholera and other water-borne diseases is the proper economic development of nations and universal access to safe drinking water and proper sanitation measures. Safe water, good hygienic practices, and basic sanitation are the required amenities in cholera hotspot areas. Achievement of goals related to diminishing poverty, malnutrition and providing proper education facilities can also reduce the prevalence of cholera and other water-borne illnesses. Health education campaigns and other social campaigns related to the preparation and storage of food items can be implemented to spread proper health education in developing countries where the prevalence of cholera is visible. Additional campaigns related to the awareness regarding the potential hazards and risks of the disease should be organized in communities where sanitation and hygiene are a constraint(CDC, 2018). The location of proper treatment sites should be prepared in case there is a surge of infection in the community. Special provisions for medicines and vaccines should also be reserved for medical professionals and healthcare workers in case of any emergency. 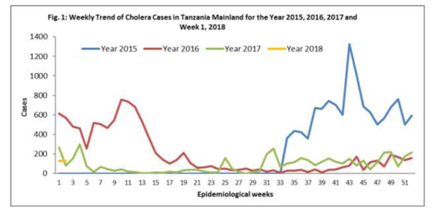 The Global task Force on Cholera Control was revitalized by who in the year 2014, actively collaborates with 50 active partners in controlling cholera on a global level. The partners that have collaborated with WHO are academic institutions, NGO's and United Nations agencies. The WHO is committed to the control and possible future eradication of cholera as an epidemic in poorly developed nations. GTFCC partners launched a strategy for ending the cholera epidemic in the year 2017. The strategy includes a global roadmap to reduce cholera deaths by 90% in approximately 20 countries by the end of 2030(Kumar, Sinha and Sharma, 2016).The global roadmap focuses on three primary strategies that will be integral in eradicating the bacteria. They are:

Conclusion
This particular scientific paper is about the bacteria that cause cholera. It is water and food-borne disease that causes watery dysentery in patients who are affected and they drastically lose the electrolyte balance of the body causing collapse and even death. A few methods are used for the detection and isolation of the bacteria from contaminated water samples for the detection of the bacterial load that is required for further investigation.

Results are based on particular case studies that are conducted on a trial basis for the prevalence of bacteria in drinking and other sources of household water. A case study of a particular area of Bangladesh has been used to display the results and the findings of the presence of bacterial load in contaminated drinking water. An alarming percentage of positive bacterial loads were prevalent in the water samples that were collected and the source of drinking water near a water body had a comparatively higher percentage of bacterial presence. A comprehensive structure of scientific findings along with diagrams and graphs are presented in the paper that provides us with a clear overview of the risks associated with the incidence of the dangerous pathogen that has troubled mankind for ages.