Task:
Biochemistry Assignment Task: Each student will select a Metabolic Manipulator addressing the current research (R), diagnosis (D), treatment (T) and policy (P). Students should include a brief outline of the biochemical analysis method used to detect/conform or manage the treatment regime for the condition.

Overview
Commercially known as Melfiat, this drug bears the generic name belonging to the category of Phendimetrazine tartarate. It is typically classified into the ATC classification, as antiobesity preparations excl., diet products and centrally acting antiobesity products. The chemical name of Melfiat is 3,4-Dimethyl-2-phenyl-morpholine tartrate and is a dextro isomer(1). 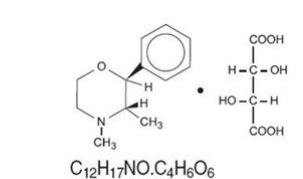 It appears as a white, odorless crystalline powder that is freely soluble in water, while sparingly soluble in warm alcohol, insoluble in acetone, benzene, chloroform and ether. In case of oral administration, each tablet of Melfiat contains 35 mg of Phendimetrazine tartarate (1).

It acts as an appetite suppressant belonging to the category of sympathomimetic amines group of drug. It acts by stimulating the nervous system, thereby leading to increase in heart rate and blood pressure as well as causing decrease in appetite. It is often used in combination to diet and exercise for treating issues related to overweight and obesity (1).

Metabolism of Phendimetrazine occurs in liver by N-demethylation into active metabolite Phenmetrazine that in turn through hydroxylation and conjugation finally is excreted in urine (1).

Deamination by cytochrome P450 to para-hydroxyamphetamine and phenylacetone has been identified to be involved as the major metabolic pathway for amphetamine. Subsequent oxidation of phenylacetone to benzoic acid and further excretion as glucoronide and glycine (hippuric acid) conjugate is noted. Furthermore, by virtue of oxidation, little quantities of amphetamine are converted to norephedrine. Moreover, it has also been found that an active metabolite called o-hydroxynorehedrine is produced through hydroxylation that acts as a false neurotransmitter thereby accounting for some drug effects particularly in case of chronic users (2).

Rapid absorption of amphetamine takes place following oral ingestion, while amphetamines are found to remain concentrated in lungs, kidney, cerebrospinal fluid and brain. Owing to their high solubility in lipid, they may readily cross the blood brain barrier. The biological half-life is variable and is dependent on urinary pH whereby the excretion also varies. However, in normal conditions, it has been reported that about 5% to 30% of amphetamine is excreted unaltered in urine by 24 hours, although actual amount of urinary excretion and metabolism is heavily dependent on pH (4).

As far as the mode of action of Melfiat is concerned, it has been reported that amphetamines tend to exert all or most of its effects in the central nervous system (CNS) by virtue of releasing biogenic amines such as norepinephrine and dopamines through the nerve terminals in storage sites. Further, through inhibition of monoamine oxidase, it can also slow down the metabolism of catecholamine (4).

Research
Recent investigation carried out in the year 2020, relating to Phendimetrazine Tartrate, have brought to the forefront that following the approval by FDA as a pharmacological intervention for treating obesity, phendimetrazine was procured through addition of a methyl group to phenmetrazine thereby leading to reduction in initial addictiveness to this compound and hence ameliorating potential abusive use. It was in this study where it has been reported that in case of a 32 weeks follow up study, the weight loss induced varied between 3.6 kg and 5.54 kg based on daily-prescribed dose comprising of 4 and 6 tablets of 35 mg respectively (5).

Moreover, a survey conducted with the USA physicians regarding the use of drugs in treating obesity revealed that 98% of them preferred amphetamine congeners, in which this phendimetrazine was the third most preferred drug to be prescribed after phentermine and diethylpropion. Thus, the short-term use of this drug is well established in the treatment of obesity whereby its temporary utilization may be noted in case of adapted pharmacotherapy (6).

Diagnosis
Treatment with Melfiat may result in diseased state and side effects in case there is a genetic defect or chemical perturbation of the biochemical/metabolic pathway of the target cells/tissues. Main risks involved include acute central nervous system stimulation, arrhythmias, cardiotoxicity leading to tachycardia, hypertension in addition to cardiovascular collapse. High risk of dependency apart from abuse has also been noted in literatures. Vomiting, diarrhea and cramps might also occur. Dermatologic implications such as pale and diaphoretic skin while dry appearance of the mucous membranes has also been noted (7).

A potentially life threatening complication of rhabdomyolysis has been reported due to therapeutic administration of phendimetrazine tartrate in a relevant literature (7).

Another case reported in the year 2007 the prevalence of Transient Environmental Dependency Syndrome due to Phendimetrazine Tartrate that was interpreted from the loss of autonomy to the environment and evident through symptoms such as frontal network disturbance, agitation, attention deficit hyperactivity disorder along with possible seizure states in case of the affected person. The affected person was a 23 years old female college student (8).

Treatment
In order to overcome the disease state that occurs as a consequence of the manipulator, a number of management strategies have been approved by the concerned authorities. Amongst them are the general supportive measures that include breathing, stabilization of the airway and circulation through maintenance of adequate airway and ventilation; relief from agitation by means of benzodiazepines, control of severe hypertension, control of core temperature, treatment of hyperkalaemia and adequate hydration with intravenous fluids. This is because in case of toxicity heightened metabolic as well as muscular activity has been linked to dehydration. Besides these, cardiac intensive care for ischemia or arrhythmia has been suggested. However, conditions like rhabdomyolysis, hyperthermia and convulsions call for additional specific treatment. As part of the decontamination strategy owing to oral ingestion, activated charcoal has been advocated as a prospective helpful aid in case of oral overdosage. Treatment as suggested mostly comprise of supportive therapy whereby recommendations have been made with respect to administration of supplemental oxygen, monitoring of vital signs in addition to establishment of intravenous access. In case of amphetamine poisoning, treatment of agitation becomes essential when the patient poses threat to himself/herself as well as others. In such instances, when sympathetic over-activity is noted, chlorpromazine that has alpha-adrenoreceptor antagonist actions has been preferred as the sedative treatment of choice (9).