What is your view of the BCR concept?
What would you do to (1) contact signatories to the Giving Pledge and (2) how would you get their attention?
What other products could be used for a purpose entity? What are the important elements of a purpose entity?
How are competitors in the banking industry likely to respond to the BCR if established?
Aaron believes that proof-of-concept for the BCR and evidence of consumer propensity to switch services is required in order to attract philanthropic funding for purchase of an existing bank. What alternative means of establishing demand for BCR services could Aaron use? What customer behavioral challenges will BCR face attracting customers?
What are the challenges of using VAL’s typologies for targeting purposes? How will BCR be able to use these to accurately forecast the size of the target audience and consumer demand?

Introduction: Bank of Cancer Research is an interesting concept which unites both profit and not for profit organizations together and provides both of them with benefits. Cancer is one of the deadly diseases, due to which nearly 8.8 million deaths in a year occur all over the world. The cure for the cancer can be invented with dedicated research which is only possible if there is proper funding. It is not easy to get the sufficient funding for research from government as well as by people in the form of charity and this is the reason for the invention of Bank of Cancer Research in short BCR by Aaron March. According to him the banks are the most profitable organizations and taking their help for funding will bring in a lot of money to make the research easier. But as usually there are some problems with the funding and the solutions for some of those problems are discussed here.
Diagnosis Underlying causes of Problem: This is the first and foremost problem that has been faced by this BCR concept. Bank of Cancer Research, the concept is interesting but it is an undeniable fact that most of the people out there are unaware of this concept. It is important to make them realize what this concept is and how it is beneficial to the society. Without public involvement it is nothing but a waste of time to even implement this concept. Almost each and every person holds at least one bank account and it is mandatory for them to use it now or then, but to make the project BCR successful it is important to make people know which bank is providing funds with the profit they make for the cancer research and which banks are not(Ward, 2015). After this list it is important to take the banks that are supporting the research and take them into public. Marketing of certain banks is very essential in order to attain the success. There are three things that people must be aware of if the banks are expecting them to involve

It is not easy to take a step further in BCR without having any idea about the statistics related to cancer. Normal public would never know how many people are suffering from cancer and the death ratio of cancer. So it is important for them to know what percent people are dying because of cancer.

The main reasons for the deaths due to cancer are

Chemotherapy is the only way to treat cancer and it is not even sure that whether a person will live or die by the end of the session. It is not even affordable for the normal middle class people. This is the reason why most people are terrified on hearing the chemotherapy name. The scientists are trying to find an alternative for the chemotherapy with their research. The people are waiting for a treatment which extends the life of the patients suffering from cancer and save them from it forever. The extensive research in this field will help the scientists in inventing new medicines and treatment for the cancer which is affordable and don’t pose any side effects.

Banks are the most profitable organizations present across the world and they have the ability to turn accounting profits to cashing profits, With the dividend ratio that they have, the banks are the best choice to get the funds. They attain huge profits which can be shared for a good cause and help the people. According to Yew Wong and Aspinwall (2014), As there are many banks and scope for many others to enter into the field, the funding becomes more easy and flexible for the research. Both banks and customers contribute something for the change in the society which is appreciable and the banks can use the not for profit organization name in their marketing which gains them a huge business when compared to their competitors. The public also tries to save up their money in the banks which work for a cause.

The only way to create awareness among public is by employing new and trending marketing strategies like using digital media. Using flyers for the marketing concept is an old fashioned yet successful method as people will come across these fliers all the time.

Discussing about the best practice: The concept of BCR isn’t a proven one. This is a new concept for whole banking sector and the public and no one is sure that the concept will work or not. A small mishap in the concept will surely lead to disastrous results which will show impact on the complete economy of a country. Banking sector is one of the main reasons for the success of any country in the world. BCR is related to the banks and experimenting with them with completely new concept is a risky task.

How to even transfer the profits into funding and make the concept successful is one of the biggest questions. There is no clear way to understand the concept and it isn’t proven yet to implement it. As banking sector is very important for any country, no government will take risk to meddle with it and affect their economy (Ling and Li, 2010)

As stated earlier the concept is new and there won’t be any experience for any person in implementing it. This surely creates a lot of fuss. The implementation of this concept needs a person who has lot of experience in finance sector and has a clear idea of what the concept is and how to bring it into action.

The only way to prove the concept is by implementing it without worrying about the consequences, this is impossible as the main role here is played by banks. But by using small banks with less number of customers at first will give a clear idea about how to implement it. The process must start in phases and the first few phases should incorporate less amount of money and should be increased if the project becomes a success.

Generating Alternatives: As said earlier it is better to start from a small bank but the whole project cannot be implemented with the help of a small bank. The research needs rich philanthropists who are interested to do something to the society on their own. And those rich people usually have accounts in big banks and making such banks involve in this project is not as easy as expected. To get to the financially successful people and explaining this concept to them isn’t a cakewalk and needs a lot of discussion. It is necessary to be successful in the ground level with productive results that help both banks and public (Kennerley, Neelyand Adams, 2013). The results must help the bank in gaining more customers and should aid people by doing more research.

The main concept of this project is to deliver the customers of a bank with all the services that have been provided to them from other banks and on top of that providing them with a good feel of donating to other people.

The project gives a clear idea of where the profits gained by the banks from people will go and how the amount is distributed for their betterment. If a separate bank has been established for BCR then it is very important to gain the attention of people and make the work a grand success.

The inventor of this concept Aaron have immense following on facebook, twitter and youtube but the sad part here is all these followers aren’t his customers and it is really hard for him to make them invest in the bank.

As said earlier the main target for this project are the financially settled people who don’t have any problem when their service charges are used for a good cause but the normal customers of a bank. These customers can also play a huge role in contribution and their attention can be gained with different kinds of loan schemes and services which are a little bit more profitable to them.

Justifying the solution: It is the human tendency to go for some things that are better than what they have and this concept isn’t an exemption. The philanthropists may shift to another concept which is better and advanced than BCR so that their donations are reached to more number of people. A good concept which outsmarts the BCR can take its place anytime making it unsuccessful.

The only solution for this problem is taking risk. Any kind of business in and around world involves a lot of risk and the only thing a person can do is to face it rather than ignoring it. It is better to go for it and keep the project updated so that people will understand how productive it is. The productivity must increase with the passing days and this helps in achieving the success for the concept.

The only way to overcome such problem is showing how good it is to get the funding in BCR manner rather than getting the donations from the banks (Cobb, 2015). The higher amounts and constant support from the bank is necessary for the researchers and it is not possible for the banks that do not implement BCR to spend heavy amounts in the name of donations every month. In this way the people will get a clearer picture of the banks implementing this concept and the banks that aren’t. 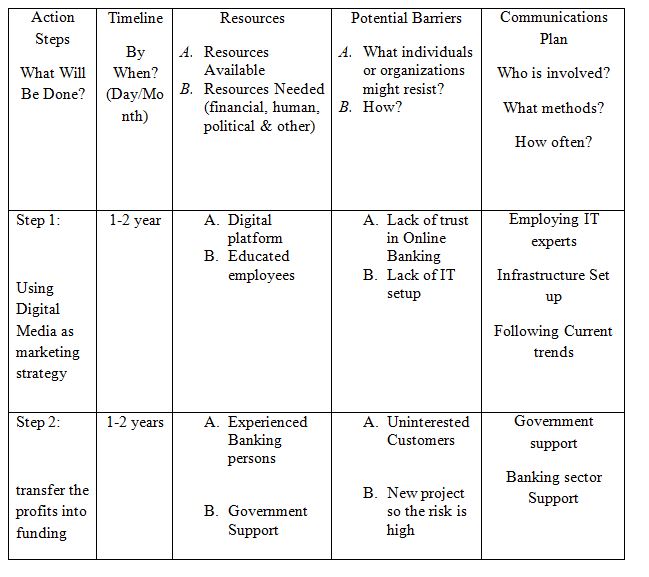 Conclusion: These are some of the problems that are faced by Bank of Cancer Research, no matter if the not for profit organization. This organization is tied up with banks or a bank is established separately for this BCR, it is important to overcome these problems in order to become successful. From public awareness to the influence of philanthropists, every point must be concentrated and special care must be taken in order to solve the problem. The BCR concept is one of the best ways for the funding of research and it must be implemented systematically.