Task: Each student is required to adopt the financial statements of a self-selected Australian public company to use as an example and place themselves in the role of a communicator in a shareholders’ meeting (Hint: Visit www.asx.com.au to choose a publicly listed company).

3. Reading and interpreting your selected company’s latest Statement of Profit or Loss and Other Comprehensive Income (Income Statement)

4. Statement of Changes in Equity

5. Other Elements of an Annual Report
Report of Independent Accountants (Auditors’ Report)

A1) Reading and interpreting Woolworth’s latest Statement of Cash Flows
a. The Company made an addition of total (1910-1848) $million which would be equal to around 62 million dollars of addition in the property and equipment for the year. The journal entry for this shall be:

b. The company received around an amount of $ 4 million by taking a long-term loan/borrowing from any other outer agency or financial institution. The journal entry for the receipt shall be:

c. Here, in this case, it has been observed that in the current accounting year, there has been an increase in the cash inflow. This has resulted into the increase in the total amount of cash and cash equivalents. The amount has been observed to be around $360 million. While in the previous year, the incoming cash was so short of that it came down to a negative $38 million, that is the outflow was greater than inflow. In this year, the organization has received enough cash from the different activities and it has covered all the deficits in the cash inflows. The net cash increase in the cash flow can be said to be healthy for the company and it shall also help in raising the liquidity of the company and making more cash ready at its hands.

A2) Reading and interpreting Woolworth’s latest Statement of financial position
a. The different current liabilities that have been incurred and acquired by the business organization are heads such as Trade and other payables, Borrowings, Current tax payables, Other financial liabilities, provisions and liabilities directly associated with assets held for sale. The different of the liabilities such as trade and other payables were incurred on account of buying raw materials on credit basis. The company wanted to keep its liquidity and so it purchased things on credit. The borrowing was made because the company wanted some financial backup for any event. So, it borrowed money from the market. Next goes the current tax payable, which has risen as a liability because it is an expense which is not yet paid off by the company. Other financial liabilities have aroused due to different kind of financial helps and loans made by the co0mpany. Prevision have been made to setup and support different kind of expenses in the future to be paid off by the company. Last comes the Liabilities directly associated with assets held for sale. It is a liability because the company has taken the cash for the sole purpose but has yet not yet made proceeds to transport the assets to the purchaser. The events were all external events (liability with the outside world).

b. The largest among all the current assets held by the company is the Inventories. It amounts to around $4233 million on the latest Statement of Financial Position. It represents around (4233 ÷ 7181 = 0.58947221835399) = 58.947221835399%. Which is roundabout 59% of the total assets. The huge number of inventories can be said to be somewhat unhealthy for the company. The company may be hoarding the inventories in order to create artificial crisis and then sell them off at high rates. But this will lead to disbalance in the economy and eventually lead to loss of the stock or their destruction. Further, any of them may get obsolete or not fit for consumption and use. This significant asset and its existence can be said to be unfavorable.

c. The head of other financial assets can be seen to be the smallest amount of current assets lying in the statement of financial position made by Woolworths. It amounts to around 53 million dollars. It forms to be around (53 ÷ 7181 = 0.0073805876618855 = 0.73805876618855%) 0.74% of the total current assets amounting to $7181. The company may be having lower amount of stock (out can be seen from the statement of financial position). This has led to fall in the amount of other financial assets owned by the company. This is the reason why the asset is relatively small given the nature of company’s business.

e. The inventories have been valued at lower of the cost and net realizable value. Cost has been calculated by making use of a weighted average mechanism and covers rebates to suppliers, settlements discounts and other expenses that have been made to bring forth the good to the present place of sale.

A3) Reading and interpreting Woolworth’s latest Statement of Profit or Loss and Other Comprehensive Income (Income Statement)
a. Here, the income statement prepared by the organization is made on the emphasis of the classification by following the ‘Function of expense’ method. It can be seen that all the expenses have been calculated and put up according to their function as part of cost of sales (Hodgson & Russell, 2014). Under this particular method, the Woolworths company discloses its cost of sales separately from other expenses. 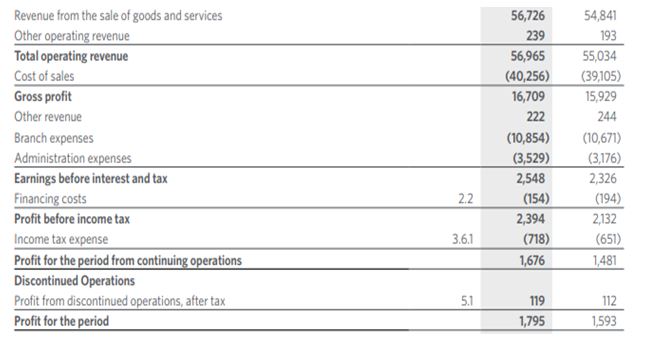 Therefore, the Income Statement is applying classification using the ‘function of expense’ method.

b. Revenue is considered by Woolworths as the fair value of consideration received or receivable on the basis that it meets the recognition criteria set out. The revenue that is received has to be rendered and calculated at fair value of the amount received or are receivable. This goes in compliance with the IAS 18.9. Revenue is recognized and recorded in the books of accounts when the overall, liability and the total ownership of the thing is transferred to the hands of the customer (Dunbar & Laing, 2017). Revenue is recorded when it seen that it can be realized and measured and it is sure that it shall be received by the organization. The service revenue of the organization is considered based on the overall structure of the ending of the overall contract with the different customers. The activities related to sale of goods can be related to the clause of IAS 18.14, while, the revenue received from the rendering of services is derived from IAS 18.20. Interest Royalties and dividends are derived and calculated based upon the terms of the IAS 18.29 to 18.30. The consideration of revenues as per this AASB 118 is done by considering the amount of any kind of trade discounts or any kind of rebates allowed by Woolworths.

e. The cost of sales can be said to be the biggest of all the expenses that have been encountered by the company. It comes at an amount of 40,256 million dollars. This is the largest expense for the company as the company has to incur huge costs in order to sell of its good. These includes transportation costs and other kind of costs related which are required to be made in order to bring the finished products to the place of sale and bring them in a proper saleable condition. Cost of sales includes all those costs that are borne in order to sell off commodities of any business organization (Dunbar & Laing, 2017).

The company has a lower amount of liquidity. It can be said that a healthy liquidity should be between 1.2 to 2. While in this case, the current ratio or working capital ratio lies at much lower than 1.2.

A4) Statement of Changes in Equity
a. The company paid off dividend of an amount of (1208 + interest of 53) that is $1261 million dollars. $479 million were also invested in the capital of the company by issuing a greater number of shares in the market.

b. The total earning per share (EPS) can be said to be a total of $132.6 million. If the amount can be broken, in the current year, the company has earned an amount of $123.4 million from continuing operations and $89.2 million from discontinued operations.

A5) Other Elements of an Annual Report
a. The name of the auditing firms included in the report is the Deloitte company or better known as Deloitte Touché Tohmatsu. 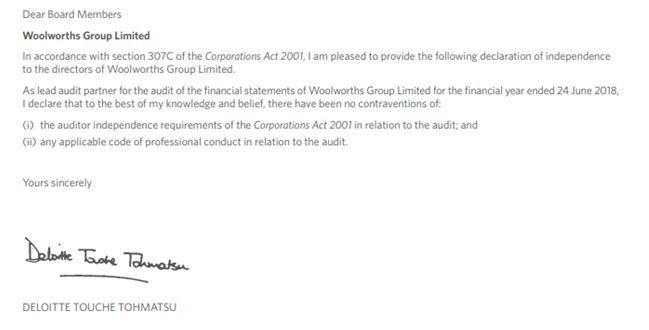 b. An auditor or the auditing firm (mainly public auditing firms) has to be independent of the people who prepare the financial statement, that is internal accountants of the company. It can be said that the auditors have to work independently and away from the influence of the company so that they may be biased while auditing and may not be able to give undue advantage to the organization who auditing is being done. This shall help in ensuring clean and unbiased rating of the organization and shall help to point out different kind of unfair practices adopted by it in its accounting method and policies.