What is a Metaphor and its Various Types? 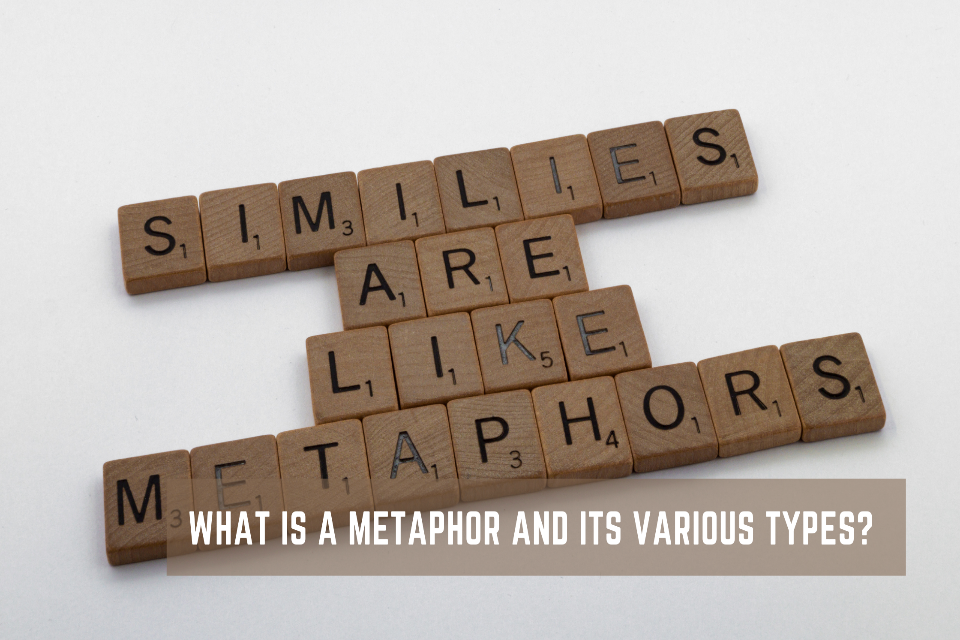 Aren’t we all aware of the phrase “couch potato”? It describes passive, lazy, and spends most of their hours watching TV. However, the real meaning of the phrase is not the same. The above is an example of a metaphor.

So, what is a metaphor? Metaphors are figures of speech that say one thing is the same as another. It essentially relates two things for comparisons or symbolism because they are identical. If you try to interpret the metaphor, it will likely come off as meaningless.

Metaphors are commonly employed in literature, poetry, and other contexts when individuals express abstract ideas with colourful language.

What is a metaphor?

If you’re looking for a denotative meaning of understanding what is a metaphor, look up the following:

Metaphors are figurative expressions that are not literal. They aren’t false statements or mistakes since metaphors aren’t meant to be taken literally.

Metaphors are analogies used in language to explain or demonstrate something by equating it to something else. Metaphors are used to accomplish the following goals:

So, what is a metaphor? As you may have guessed, Metaphors are pictures that make a powerful point by establishing a similarity between two things that you would not usually mix. Here are a few metaphors and their definitions.

In this context, a person is compared or equated to as a “black sheep”. It simply indicates that the individual is considered as a family shame.

The speaker does not have cold feet in the above sentence. Instead, it essentially means that the speaker lacks confidence or is particularly worried about his presentation tomorrow.

As most of you may have suspected, there is no fruit in the speaker’s eye. Instead, it just signifies that the speaker adores Preet.

Metaphors help the readers to relate to the theme of your writing or speech. They also come in handy when trying to add images to your work.

While reading a book, listening to songs, or conversing with someone, you may come across various sorts of metaphors. Now that we have a brief understanding of what is a metaphor let us take a look at the different types. The following ones are some of the most common types of metaphors:

There are more metaphors than the six often used ones listed above. If you want to understand more about anything in-depth, you may talk to your English tutor and ask for help.

What Is the Distinction Between Metaphor and Simile?

Let’s look at the distinction between metaphors and similes now that we understand what is a metaphor and some of the many types of metaphors.

Because they both create analogies, it’s simple to be mistaken between a metaphor and a simile. If you pay close attention to the sentence, you can easily distinguish among similes and metaphors. When comparing objects, similes often employ the terms “like” or “as,” whereas metaphors declare the similarity.

Let’s have a look at an example. You’ve probably heard the hit song “Dynamite” by BTS, a Korean boy band.

“Life is sweet as honey,” for example, is a simile, but “I’m diamond, you know I glow up” would be a metaphor.

How Do You Make Good Metaphors?

We hope you’ve grasped the concept of what is a metaphor by now. If you’re attempting to make your writing more intriguing by using metaphors, remember that metaphors frequently describe things that aren’t actual. Consider the metaphor of being “born with a silver spoon in your mouth.” You will need to look at the correct context if you want to make the metaphor understandable. No infant is born with a silver spoon in their mouth. You must prove that the child was born into a prosperous family.

While creating your metaphor, remember to stick to topics that the readers are acquainted with but don’t usually identify with a person. Anytime you feel like your composition needs support, you might try including metaphors in your content. However, you must be cautious in your application.

You can utilize metaphors effectively in your writing with some practice and coaching. However, if you want to support, you can always request assistance.

What is a metaphor?

A metaphor is a figure of speech that helps draw a parallel between two instances. However, their meaning cannot be taken literally. For example, a storm is brewing in his heart.

What is a metaphor used for?

What are the most common types of metaphors?

The six most common metaphors in use include absolute, extended, implied, dead, mixed and root metaphors.