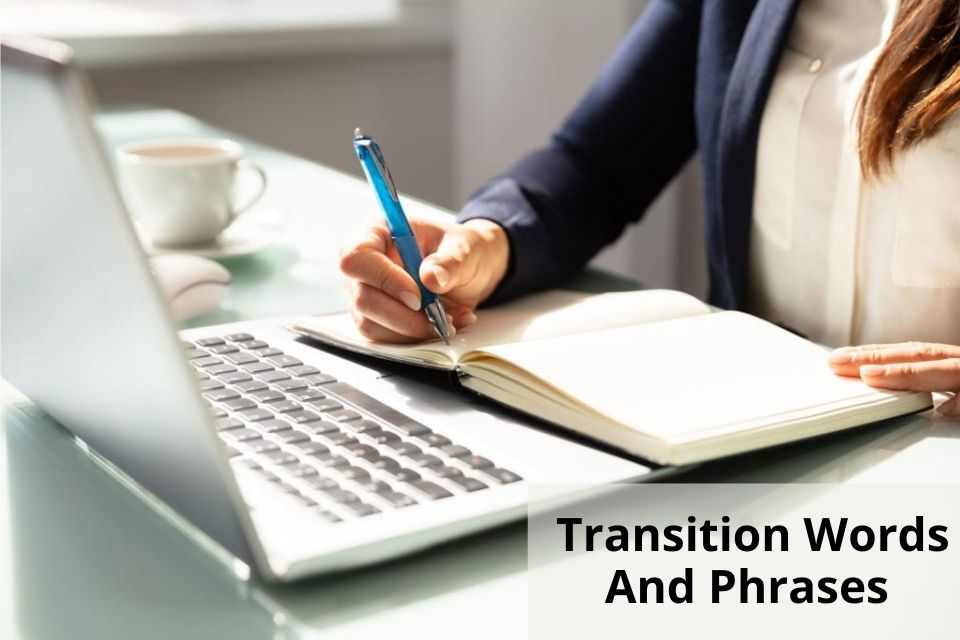 Also known as connecting or joining words, transition words and phrases are used to establish a link different from the ideas in your text. Transition words help the readers establish a proper connection between the different parts of the text, making it easier to follow along.

The medicine proved ineffective against the illness. Therefore, a second batch was developed. However, this time also the researchers failed to find a cure.

It is essential to understand what transition words and their proper usage are to make your writing clearer.

Using transition words: When and How

Transition words are generally found at the very beginning of a sentence. They are often followed by commas and help express the relationship between the sentence and the previous one.

There is a lack of study to prove this hypothesis. Nevertheless, one cannot simply refute the hypothesis.

The middle of a sentence or clause might also include a transition word. But, again, the proper placement is the key to conveying the intended message.

It has nevertheless been argued that there is an underlying connection between the variables.

An example of a text with and without a transition word

The below-mentioned text conveys the intended message; however, due to a lack of transition words in the text, the relation between the various events is unclear.

By adequately adding a few transition words in the sentence, the text would be much smoother, and the relationship between the events would be clearer.

Example of a text with transition words

The first experiment was a success. However, the second experiment failed. Nonetheless, the third one was again a success, whereas the fourth one failed.

The best way to fix such a problem is to use fewer transition words in the text and use them only when needed.

The first and the third experiment were successful, while the second and fourth experiments failed.

Striking a balance of effective use of transition words is the key to making your text much smoother. Without transition words, following the logic of the text becomes difficult and overusing them can make the text feel much longer and over-explained.

The different types of transition words and their examples

There are four different types of transition words. These include

These are further divided into sub-categories based on more specific functions.

It is essential to note that though some transition words might have a similar meaning, they cannot be used interchangeably. Therefore, knowing the proper meaning of the transition words is important when using them. If you have any doubts, try consulting a dictionary.

These types of transition words are used to introduce new information or example in the text. In addition, these are used to make comparisons or provide clarity to the previous sentence.

This type of transition word is used to describe a sequence like the chronological order of events or the order in which they appear in your text. Sequential transition words play a significant role in signposting in academic texts.

The most common mistakes with transition words

It is very common for writers to misuse transition words. It is important to remember the proper usage and remember that similar meanings do not mean they can be used interchangeably.

Improper usage of transition words can make the writing look much unclear and illogical. Likewise, misrepresenting the connection between your sentences can cause the readers to get confused and lose track of the flow.

Improper use of “therefore”
Therefore, similar words that express a cause and effect relationship should be used to form a connection with the preceding sentence logically. On the other hand, it is essential not to use such transition words to imply illogical connections.

The above example illustrates an illogical connection between the sentences. It suggests that the average follows the logical question that is asked. However, the average could have been different. To fix this, we need to remove it.

Improper use of “also”, “and” or “so”
Words like “also”, “and”, etc., can be often found in academic texts. However, such words are considered to be too informal if they are used to begin a sentence.

To fix it, we can either replace it with a suitable transition word or altogether remove it.

Subordinating conjunctions are used to introduce clauses that are not valid on their own. These include words like “although” and “because”. Any clause that such words have introduced needs to be followed by another cause in the same sentence.

There are two ways to fix this problem. The first option is to use a comma to combine the sentences. The second way is to replace the transition word with a different one that is more appropriate, like “however”.

“And” vs “as well as”
Many students mistake using the phrase “as well as” instead of using “and”. Though they might have a similar meaning, they vary slightly. “And” suggests that both the elements are of equal importance. On the other hand, “as well as” suggests that the successive element is less important than its preceding one.

In the above example, the development of the central theme is much more important than the characters. Therefore, we can replace it with “and” to fix it or change the order in which the essential elements appear in the text.

It is important to note that when using fixed phrases like “both this and that”, the “and” should not be replaced with “as well as”.

Using “and/or”
Words like “and/or” should be avoided in academic texts as it can make the writing look messy.

You will first need to understand if you want to use “and/or” or just “and” and “or”. If you need to use both, ensure to keep them separated to make your writing as clear as possible.

This includes words like “hereby”, “therewith”, etc. Most of these words appear in conjunction with words like “here”, “where”, or “there”. These words should be avoided when writing as they make your text look old-fashioned and can also make the meaning obscure.

Such words should be replaced with a modern replacement to express the statement more clearly to the readers.

When can we use transition words?

Transition words and phrases are used to form a logical connection between the different sections of your text.

Why do we need to use transition words?

It is important to use transition words to make your text clearer and easy for your readers to follow.

What are the different types of transition words?

Why should you avoid overusing transition words and phrases?