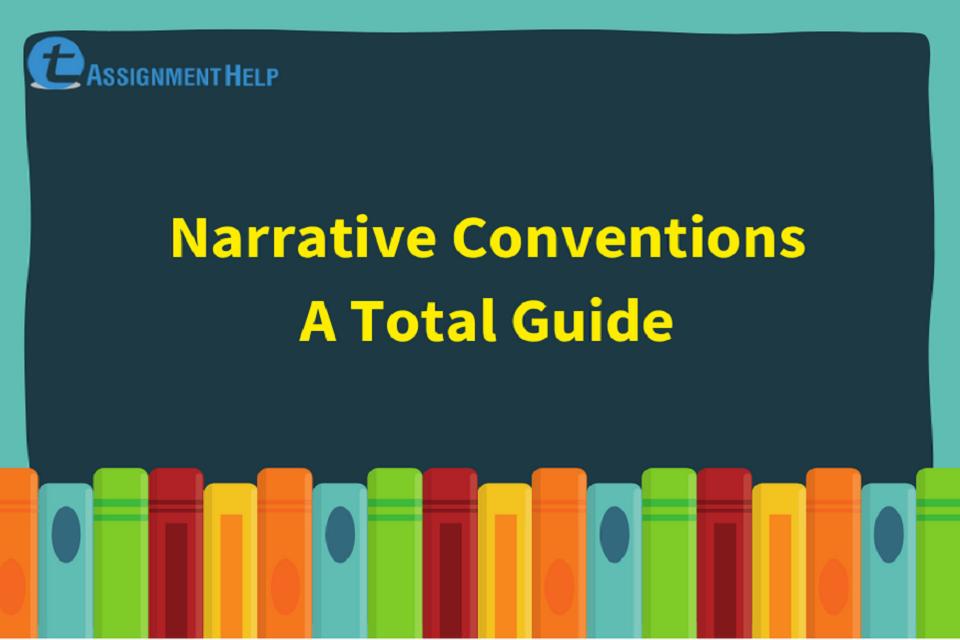 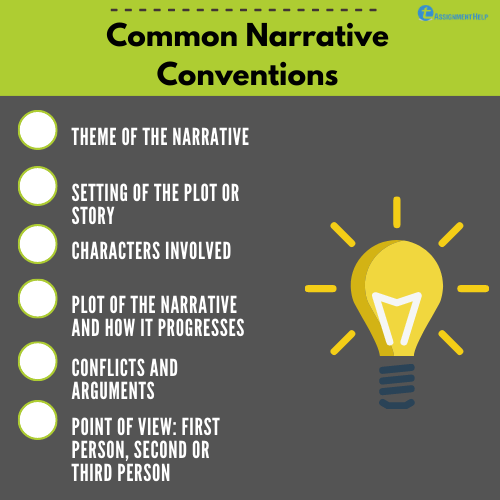 Conflict
By using this tool of narrative communication, the conflicts between the comprised characters could be effectively displayed in the literature. Below are listed down some of the contexts in which the tools of conflict narrative conventions could be implied. 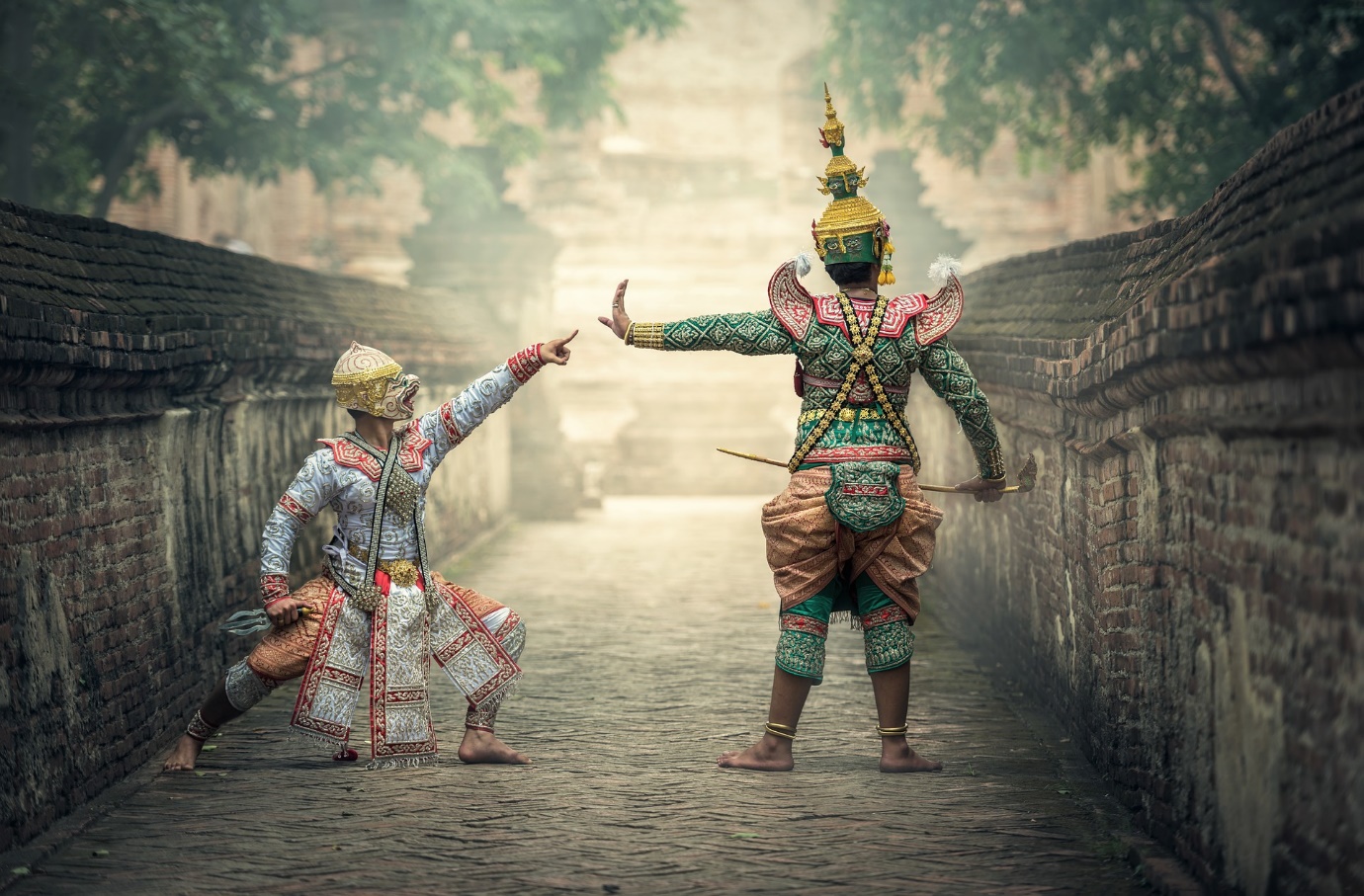 Against the society
The context majorly signifies the instances in which the main character tries to struggle against the evil approaches of societal factors. The cases like corruption, crimes, moral misappropriation, etc. are taken majorly as the factor which causes conflict with the character in the literature. It is the protagonist in the literature who frequently enters into a conflict with society. The tool would be much useful in the context when a character is forced to comply with the moral framework laid down by society.

With Self
When the person goes through conflict with his own psychological process and is under regular introspection, this tool of the narrative convention is the most appropriate one to be implied. The context majorly signifies a situation when the character is in a dilemma to select in between good and bad choices. This tool helps the author in displaying emotional instances in a very effective way before the audience.

With another person
The context in this instance would be majorly the conflict between the protagonist and antagonist. The author is required to display strong hatred between the two characters. The tools could also be used in a subtle context like indirect conflicts between the characters.

With the environment
The impact of natural calamities on the characters could be visualized by using this tool of narrative conventions. The conflict happens majorly because the characters are not able to meet their targets because of the natural interferences. The significant examples of its implication could be traced in ancient literature like Troy and Odysseus.

Setting
The tool of setting is significant for the drafted literature since the whole context is built on its foundation. Variation in setting could even change the entire pitch of the storytelling. The tool of storytelling could be described as the backbone of the literature. All the elements in the story are linked together by setting the narrative conventions.

Destination setting
The tool is used to signify the place in which the mentioned story develops. It is a very crucial tool in developing the foundation of the story. The destination could be signified by a country, city or even a small room.

Period setting
The period in which the described story takes place is specified by using this tool of narrative conventions. 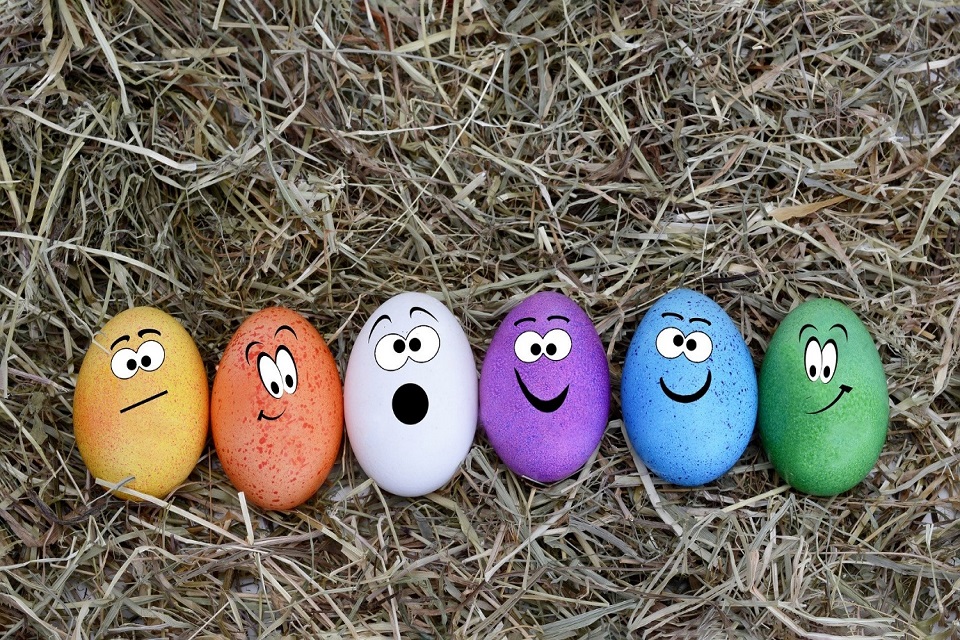 Motifs
The elements with contextual prominence, which frequently emerges in the storyline come under the category of motifs.

Symbol
Any factor in the literature which signifies any object, character, and place could be termed as a symbol. The writer could change the perspective of the reader by implying the tool of symbol narrative conventions. They play a significant role in providing clarity to the theme of the selected literature. 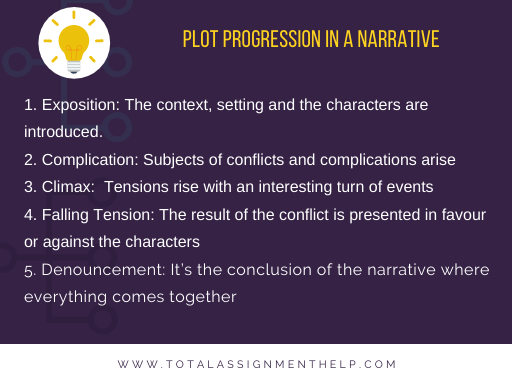 Exposition
The initial section of the narrative could be classified under this division. It could also be termed as the introduction of the drafted literature. The writer makes a good effort to introduce the context, involved characters, contained settings, etc. in the section of the exposition.

Climax
A turning point is introduced in the third stage of the literature. It is in the climax section that the reader knows whether the results are in favour of or against the intentions of the protagonist.

Falling Tension
The end results are already revealed by this stage. The tension between the antagonist and protagonist significantly decreases in this stage. The stage makes the platform for the conclusion of the whole literature.

Imagery
The tool of imagery is used by the writer to create a visual image of a particular scene before the audience. It is one of the useful narrative conventions tools which come under the classification of descriptive language.

Sensory Imagery
The author tries to invoke the intelligence and feelings of the audience. 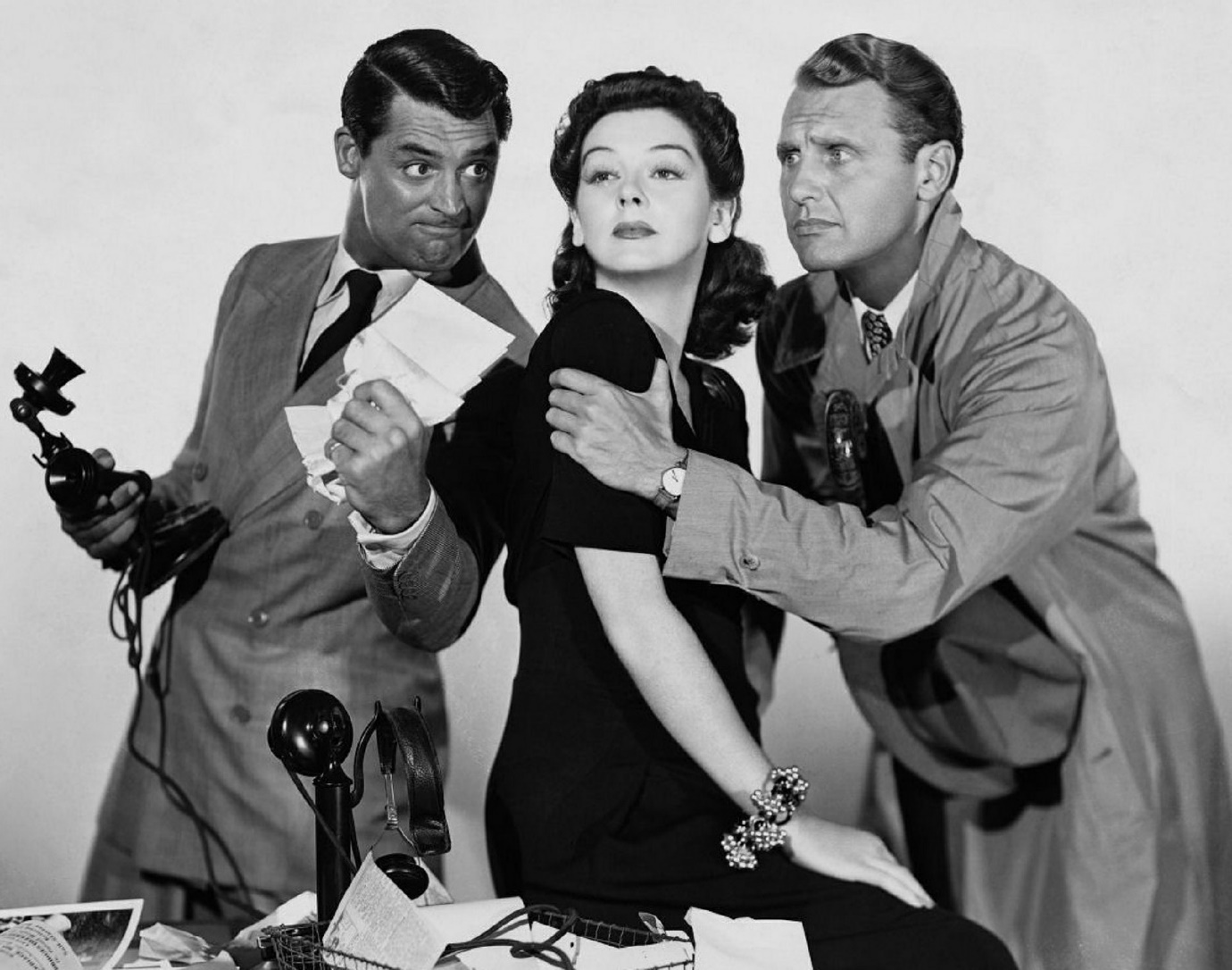 Antagonist
The negative character or the villain is considered to be an antagonist in the literature. The preferences and course of action would be opposite to that of the protagonist. The whole storyline witnesses the skirmishes in between the antagonist and the protagonist. The writer tries to create a negative image of the antagonist before the audience so that a perception of disgust regarding the character could be created among the audience.

Protagonist
It is the protagonist who leads the storyline, and it is around this character that the whole context revolves around. It is the activities and the decisions made by the protagonist that leads to the various advancements in the plot.

Characterization
The writer needs to build a relation between the characters and the audience. For this, the author uses the tool of characterization that could be further classified into: – 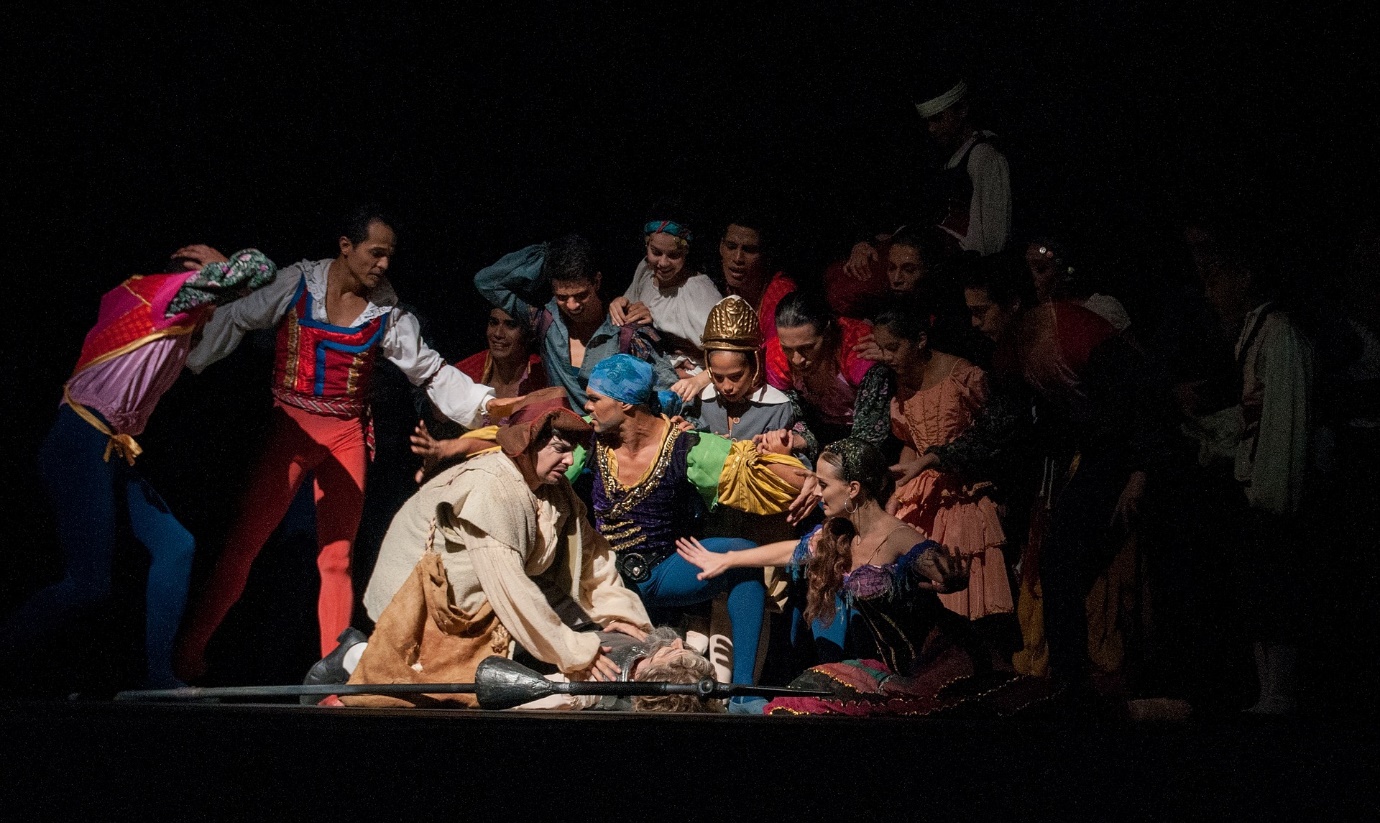 Interaction and relationship
The personality and the temperament of the character are determined by analyzing the relations maintained with other characters in the storyline.

Thoughts
The insecurities, beliefs, perception, etc. of the character would provide a strong image among the audience.

Dialogues
The details like the environment in which the character was brought up, native land, family background, etc. could be obtained by analyzing the dialogues.

Point of View
The narration of the storyline could be done by the author from three different points of views, first-person, second-person, and third person.

First-person
The whole storyline is being narrated from the point of view of the protagonist in this approach. The first-person approach would enable the writer to provide detailed information regarding the thought process, preferences, family background, etc. before the audience. However, the information provided by this approach may be a little biased towards the justifications of the protagonist. The use of the first-person pronouns and the reflective explanation could be widely seen in this approach.

Second person
The author assumes himself as the constant presence on every occasion of the storyline. The partiality hence could be avoided by the author in this style of narration.

Third Person
The approach is very similar to that of the second person narration, but the narrator is omniscient in this case. The narrator knows every character’s mental process and can provide a subjective justification from each perspective. The third-person pronouns like they, she, he, etc. could be widely seen in the third-person perspective. 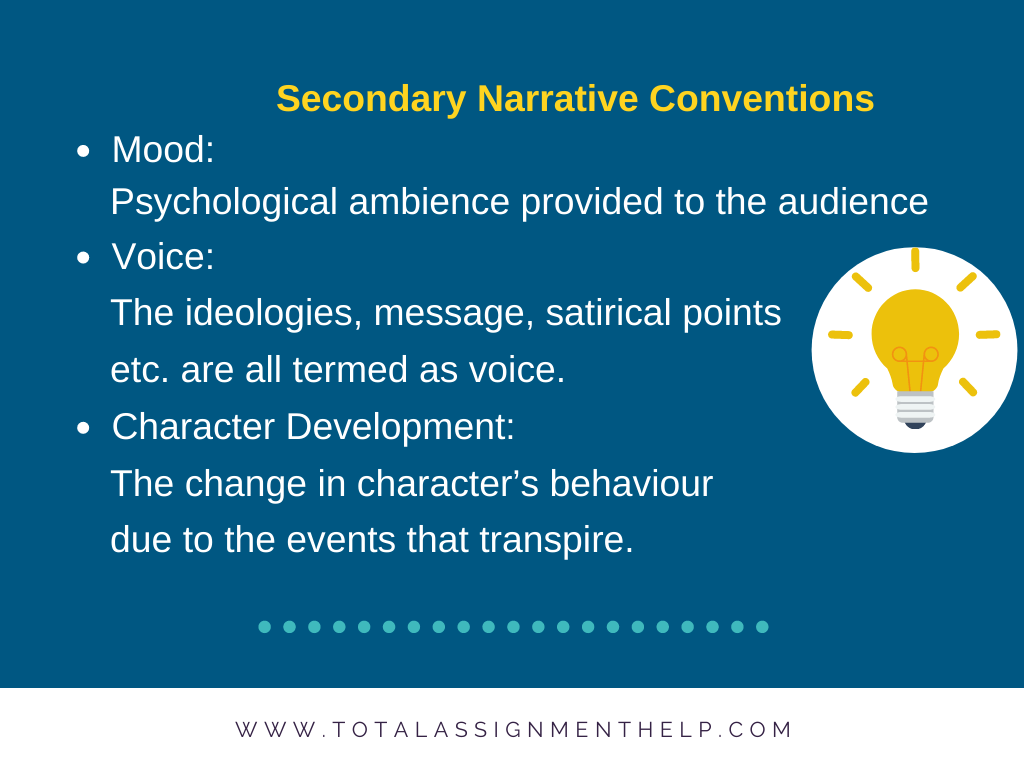 Tone
The style of authors could be determined by the tone of narration in particular literature. The authors could take any tone as per their convenience. It could be peaceful, romantic, persuasive, etc. as per the context and character demands in the instance. The point of view of the current character in the plot would create an immense impact on the tone of the narration. Heavy variations in tone could be observed when the point of view of the narrator changes. Whereas the first person could make a dynamic tone in a particular instance, the third person would be more neutral and calmer while the narration of the same instance. The use of appropriate tone in particular scenes would grab the attention of the audience.

Character Development
The engagement of the audience could only be ensured if the development of the character is done properly and systematically. The whole plot becomes lifeless in the absence of character development. There is no point of including dull characters in a story play which demands a lot of action and drama.

Mood
Readers often misinterpret mood with the tone of the literature. The mood is the psychological ambience which is provided to the audience with the narration. The mood of a literary work could be controlled by the effective use of descriptive language tools like imagery.

Voice
The art presented in front of the audience also holds its own innate voice like that the authors retain in themselves. The major theme, ideologies, messages, etc. conveyed to the audience via the literature could be termed as its voice. The whole point of presenting the literature will go in vain if the voice doesn’t reach the audience. The original intention and the thought process of the author could be assessed by just analyzing the voice of the literature. 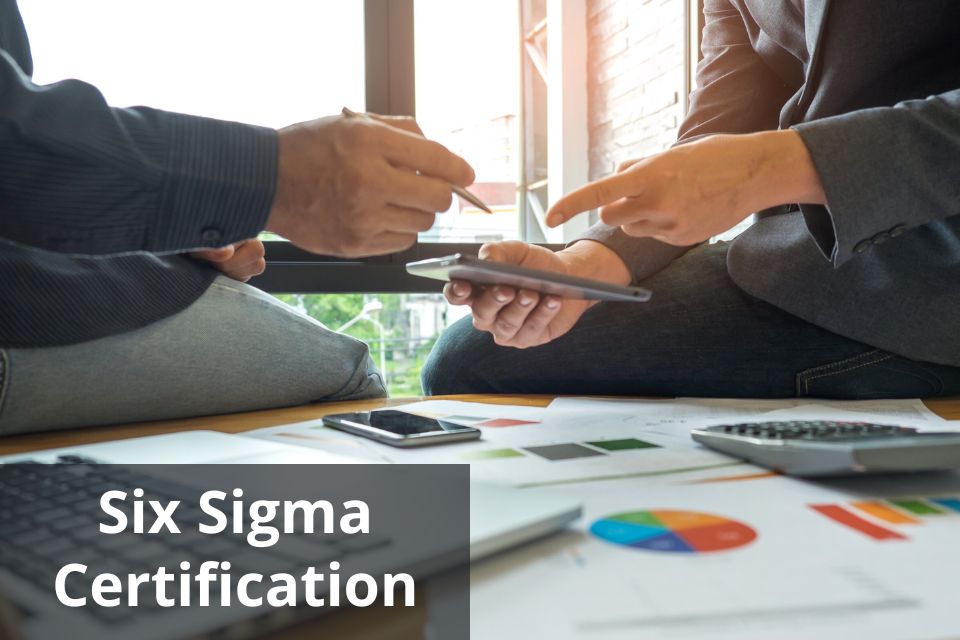