What are extraneous variables? 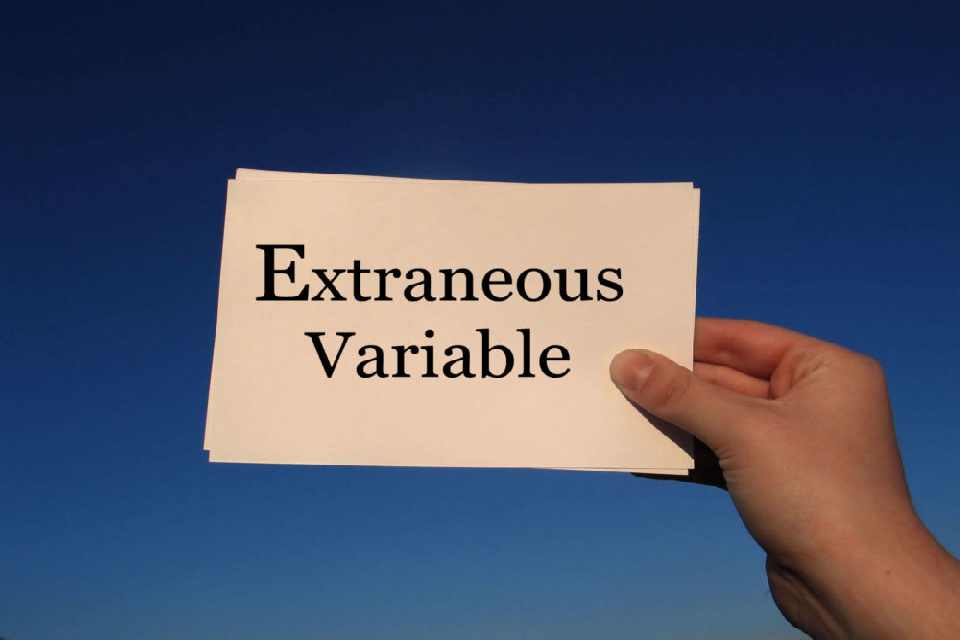 In experimental research, any variable that is not being actively investigated but can impact your study’s outcome is termed an extraneous variable.

Suppose extraneous variables are not controlled in a research environment. In that case, the results can be severely inaccurate, leading to an improper conclusion about the dependent and independent variables’ relationship.

What is the importance of extraneous variables?

Extraneous variables can provide alternative explanations for the outcomes of your study, thus diminishing the internal validity of your study.

Students from a local university were recruited and split into two groups (control and experimental/treatment) to conduct the study. The independent variable was manipulated in the following way.

Participants from both groups were asked to take scientific quizzes, and their scores were recorded to be compared.

If extraneous variables are left uncontrolled, their effects might alter the outcomes, making it hard to ascertain the independent variable’s exact effects on the dependent one.

Extraneous variables can also make it seem that the independent variable influences the dependent one when there is none.

Example
The scores from the above example can be affected by the following extraneous variables.

If there is a systematic difference of these variables between the groups, confidently concluding whether the outcomes are a result of the independent variable manipulation or arose from the impact of the extraneous variables can be a challenge.

Difference between extraneous and confounding variables

A confounding variable is an extraneous variable that can influence both the independent and the dependent variables.

Example
Including participants like research students who already work in a lab, the setting is a confounding variable since people who work in labs are known to wear white lab coats and have quite high scientific reasoning skills in general.

Therefore, it is doubtful that your manipulation would enhance their scientific skills any further. The only variable, in this case, would be the extraneous ones that would have any impact on scientific reasoning. Factors like educational background, the field of study etc., would be the influencer. While interest in science would indicate higher scientific reasoning abilities, wearing a white lab coat does not necessarily relate to it.

The types of extraneous variables and how to control them

It is sometimes possible for the participants to figure out the purpose of the study and act in a consistent way that agrees with the hypothesis. However, it can introduce bias in your outcomes resulting in reduced external validity of the results.

Example
Participants in the study could easily infer the intentions behind the study as they could understand why they were asked to wear lab coats and take the quiz.

The participants started to work hard on the questions in the hope of getting higher scores.

Example
The group wearing the lab coats are encouraged to do well in the quiz. Being in a motivated lab environment that they are comfortable with allows them to perform well in the test.

The other group is not motivated to perform well, and they did not prepare well for the test and got bad scores.

Masking can hide the assignment condition from both the participants and the experimenter to eliminate experimenter effects. For example, when conducting a double-blind study, the researcher won’t influence the participants to act in specific ways or interpret results that selectively complement their hypothesis.

Situational variables: Environmental factors like temperature and illumination can also alter the behaviour of the participants. These factors are known as situational variables and can cause random variations in your measurements.

You will need to eliminate or reduce the effect of situational variables if you want to understand the relationship between the dependent and independent variables clearly.

Example
To conduct your study, you have to use in-campus labs, which are only available either very early in the morning or very late in the evening. Because these extreme schedules can affect the participants’ performance, it is considered an extraneous variable.

Suppose you want to avoid the impact of situational variables on the outcomes of your study. In that case, you will need to hold them constant throughout the study or account for them statically in your analysis.

Example
Educational background and degree are significant factors in determining the outcomes of scientific reasoning among the participants. Participants with a strong background in science and mathematics are more likely to perform better than others.

Extraneous variables like participant variables can be controlled by using random assignment when dividing the participants into control and treatment groups. It allows the participant’s characteristics to randomly be distributed among both the groups, thus minimising their effects.

How are extraneous variables different from confounding variables?

What are the different types of extraneous variables?

How are control variables related to extraneous variables?

When extraneous variables are controlled in experimental research, they turn into control variables.

Why is it essential to control extraneous variables?